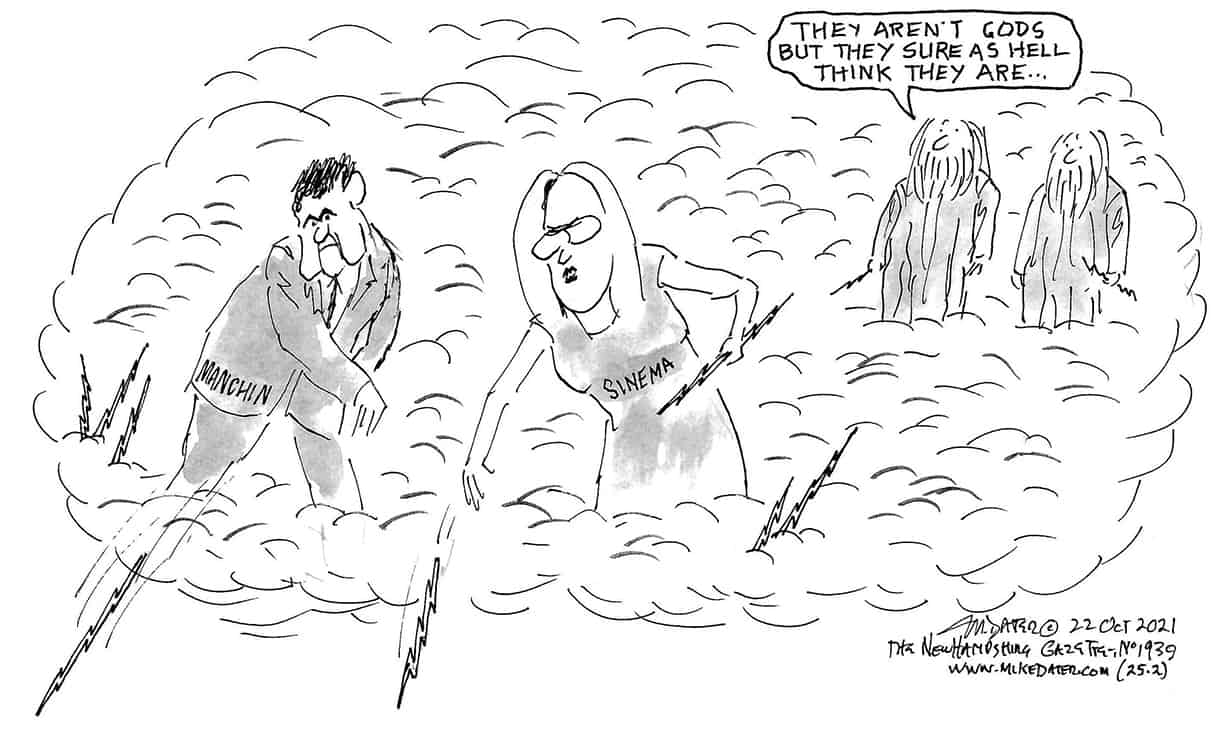 One could imagine that a newspaper embarking on its 266th year might allow itself to ease up a bit. After weighing our options, though, we said to hell with that.

How could we back off now? Have you seen what these people are up to? If we’re going to make a change, we need to do more. If things keep going the way they’re headed, we’ll be lucky if we see 275. We’re not worried about running out of words, but oxygen and water are another matter.

Judging solely from news that is commonly available, it’s pretty plain that the current plan—such as it is, if there is one—is to destroy our shared natural environment as rapidly as possible. With the usual suspects getting their usual cut, of course.

No one wants to be a party pooper, but somebody’s got to say it: unless we have overlooked some bold brilliant plan which is being put into operation even now, as we bash these keys—in which case please inform us asap—this whole dang planet is in really deep doo-doo.

Of course, if we ever did really lose all hope, we’d just retreat to the morgue* and read back issues while awaiting the inevitable. It is, however, our time-honored policy to document whatever these aforementioned individuals are up to, no matter the likely outcome.

Between New Year’s Day and October 8th, the U.S. was hit by 18 environmental disasters costing $1 billion or more. That’s one every 15 days, with 84 more days to endure. Statistically we can expect to be slammed by 5.6 more of these events before the year is over.

Since 1980, the U.S. has been hit by an average of seven $1 billion disasters per year. Six years out of those forty really stand out, with twice the average number or worse.

The first of the outliers was 2011; the worst one was last year.

The trend is obvious. You don’t need a PhD to see it. All over the globe, kids are proving that all it takes is a grade school education—and they’ve got a hell of a lot more at stake than any cabal of wattled old geezers, no matter how much pilfered, polluting loot they’ve got stashed away. The point that trend is making could not be more clear: it’s time to “just say ‘No’”—to fossil fuel.

We can state the dismal facts cited above so confidently because NOAA pays experts to track such events, and to make their work available to the public. Naturally some—the RNC, Heritage Foundation, American Enterprise blah blah blah, &c. ad nauseam—are enraged by this squandering of federal tax dollars which they didn’t pay, on an endeavor that is blatantly socialistic, and would love to put a stop to it. According to the tenets of neoliberalism, any member of the public who wants to know this stuff should damn well write a check to Accuweather. Those fatcats would have pulled the plug on the practice by now, but they still haven’t found a way to get those public employees fired while making themselves appear heroic.

If our public discourse were a little less raucus—which is to say, if the buzzards cited above had to pay steep taxes on the lies they subsidize—it would be easy to hear the voice of sweet reason, calmly saying, “what a great time to borrow cheap money and hire lots of people to build up all sorts of systems that won’t kill us or our environment.”

Such a constructive course of action would need to be implemented by a certain class of elected potentates. Under our customary rules of democratic engagement, arrived at over decades of struggle between the haves and the have-mores, it has been determined—though not in law, that would be vulgar—that said potentates owe their allegiance not the poor schlubs who merely voted them into office, but to the oligarchs who underwrote their election campaigns.

And those oligarchs have heard that a little loose change is still tucked away under Earth’s sofa cushions. Who are these mere potentates, to stand in their way?

Besides, they could use some good news. Times have been tough lately for the multiple-mansion crowd.

Plebians from coast to coast have been acting as if they had a right to jobs that won’t kill them, for wages which would allow them to live actual lives in those fleeting hours between their unpredictable shifts—with roofs over their heads, no less! Those wretches are actually refusing to work for standard starvation wages! Are there no food pantries?

Things had been going so well, before the riffraff managed to recall that our grand continental plantation once promised to be—on paper, mind you!—a “democratic republic,” whatever the hell that is. Curse those foolish Founding Fathers….

Wait! What? Did we say that out loud? Sorry, dear reader. Every once in a while our old knob-and-tube wiring gets crossed. Next thing we know we’re channeling the ghosts of robber barons like Fisk, Frick, Mellon, and Morgan….

OK, we’re back on the rails, thank God. That was such an unpleasant experience. Now, where were we? Oh, yes….

Jeez, Louise—this is not much better. The twinned fates of humanity and the planet on which we depend are in the hands of Joe Manchin and Kyrsten Sinema. They’re like four-year old twins yelling that they’re hungry, but refusing anything you put before them.

No, actually, that’s too kind. They are acting as if they were Greek gods—a notoriously willful, cruel, and capricious bunch, from whom little good ever came.

Hell, maybe they are gods.

* In the generally-accepted argot of the news racket, the morgue is a place where ranks of filing cabinets store meticulously-maintained, alphabetized subject files. In our case, it’s more like a room full of stacks of old newspapers. And if you think that sounds grim, well, it could be worse.