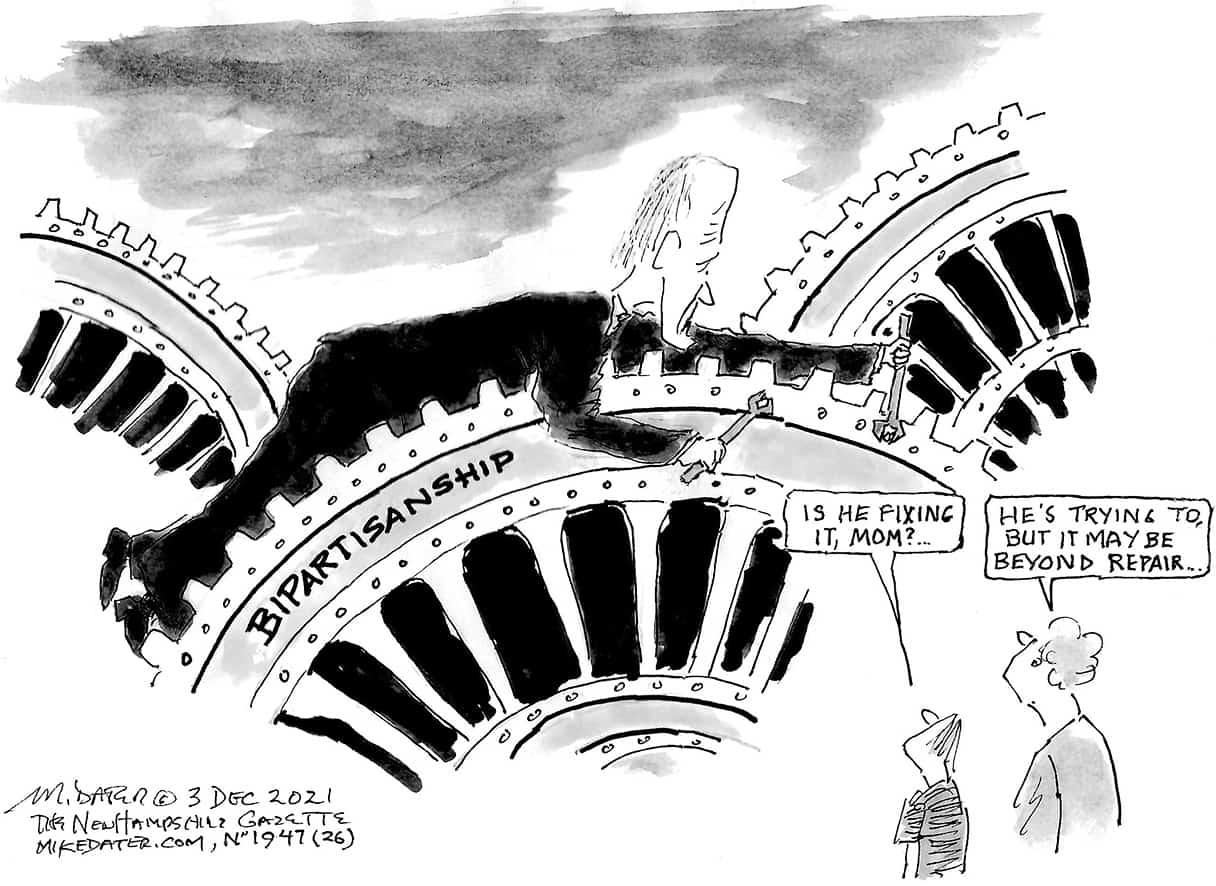 Readers, are you tired of the bitter bickering, constant conflict, and demeaning dialogue that pass for public discourse these days?

Of course you are. Who wouldn’t be? The only thing on which Americans can agree is that other Americans are far too disagreeable.*

Well, good news, everyone, we’ve got the perfect solution! Here’s how it works.

Let’s say the neighborhood arsonist strolls up your driveway with a gas can in his hand. He’s eying your garage in a manner that seems suspicious. Ordinarily, you might be tempted to come down off your porch with a pipe wrench in your hand, telling him in no uncertain terms to get the hell off your property. As any reasonable, unbiased person could see, that would not be a very neighborly welcome.

Sadly, situations like this are all too common these days. That’s why we developed our new app, Bipartisanship.™ Just download it onto your mobile device, and attach a few unobtrusive wires. In a matter of minutes, you’ll be good to go anywhere—without getting into an argument that might escalate into…well, you know.

By monitoring your blood pressure and cortisol levels, Bipartisanship™ can predict—and ward off—any rude, uncivil words and threatening gestures. How? By administering an authoritative but non-lethal electrical signal to a sensitive part of your anatomy.

Assuming that you promptly de-escalate matters—by negotiating a compromise, for example, such as substituting Fido’s doghouse for your garage—Bipartisanship™ will dial down the amperes. In a couple of weeks—’round the clock, to ensure domestic tranquility—Bipartisanship™ will persuade you that compromise is much more civilized than always insisting on getting your own way.

True, your bank account will have been drained, your car repossessed, and your mortgage foreclosed; your tarp may leak, friends and family may refuse to visit your new home, a campsite under a bridge. Look on the bright side, though—you will have done your part for civility, just by invoking the magical powers of Bipartisanship™ !

Unfortunately, our new app Bipartisanship™ is, as yet, just vaporware—another pipe dream wafting up through the ductwork from our Cyberinsecurity Department.

Alas, the same is true for its eponymous real world counterpart.

Bipartisanship is, by definition, cooperation between the two political parties ordained by God† to manage our affairs. Since the rise of the reptilian Speaker Newt a quarter century ago, the two parties have cooperated only to put the screws to the working class. As a result, money is sovereign. It may go wherever it likes; borders being no obstacle.

The inevitable result, for an alarming percentage of the population, is that the planet has reverted to a Hobbsian hellhole. Every working person on the planet, man, woman, and child, is pitted against all the rest in a race to the bottom. Even the winners lose; the house always wins.

America’s decades-long experiment in deregulation, tax cuts, and social safety net shredding resulted in a succession of financial f____ups, following which Wall Street gets bailed out, and no one of any consequence ever goes to jail. Meanwhile workers who once thought themselves exempt are being ground up by this worldwide mêlée.

Republicans are restricting access to ballot boxes left and right; Democrats can’t or won’t protect them, but you can’t say that Americans don’t have democracy. They have it exactly as H.L. Mencken defined it: “Democracy is the theory that the common people know what they want, and deserve to get it good and hard.”

God forbid, though, that the press—and lesser news media—report fully and honestly on these developments. Doing so would require that they tell the whole truth. The bosses can’t allow that. Shareholders would get upset, and they’d get fired.

As a result, most of the media that matter are engaged in an Olympian competition consisting of a single test: which among them can execute the most appalling example of performative idiocy?

A November 27th headline from NBC News provides a prime example: “Laser-focused on 2020, Trump seeks a Michigan Legislature that could help him in 2024.”

Uh, help him do what, exactly?

According to the Peacock Network, “It’s unusual for a former president to endorse in races so deep down the ballot.” Yes, especially one who should have been buried to the eyeballs in indictments long ago.

Nevertheless, Dolt #45 has found time to back “seven candidates for state House or Senate seats in Michigan…[all having] one thing in common: They’ve made election administration and investigating last year’s vote central to their platforms.”

Dan Froomkin, at PressWatchers.org, is an expert at correcting journalistic malpractice. Here’s his rewrite: “Donald Trump and the Republican Party are laying the groundwork to steal future elections.”

Since NPR has cornered the market on upbeat endings to horror stories, we’ll close on a downbeat note. Cleta Mitchell—a voter-fraud crank who was on the phone helping when Dolt #45 tried to get Georgia officials to throw the election, has been secretly appointed to the Advisory Board of the Election Assistance Commission [EAC]. Votebeat calls the EAC “the only federal agency with authority over elections.”

* By “Americans” we mean, of course, U.S. citizens. If inhabitants of any lesser nation in the Western Hemisphere—which is to say, of course, all of them—are offended, they’re welcome to sue us in the International Court of Justice [ICJ] in the Hague. Good luck, though. In 1985, the U.S. declared itself above international law. President Reagan had no choice, really. The ICJ was threatening to look into the CIA running guns and drugs in and out of Nicaragua so as to overthrow its government—a preposterous conspiracy theory.

† In this context, “God” means how we decide who has won an election. As things now stand, whoever gets the most votes wins. For reasons too tedious to go into here, this method strangles all potential third parties in their cribs. Wide adoption of ranked choice voting would give third parties a chance—and perhaps even force our existing parties to get useful or die. While we await electoral utopia, though, climate change and viral mutations accelerate.