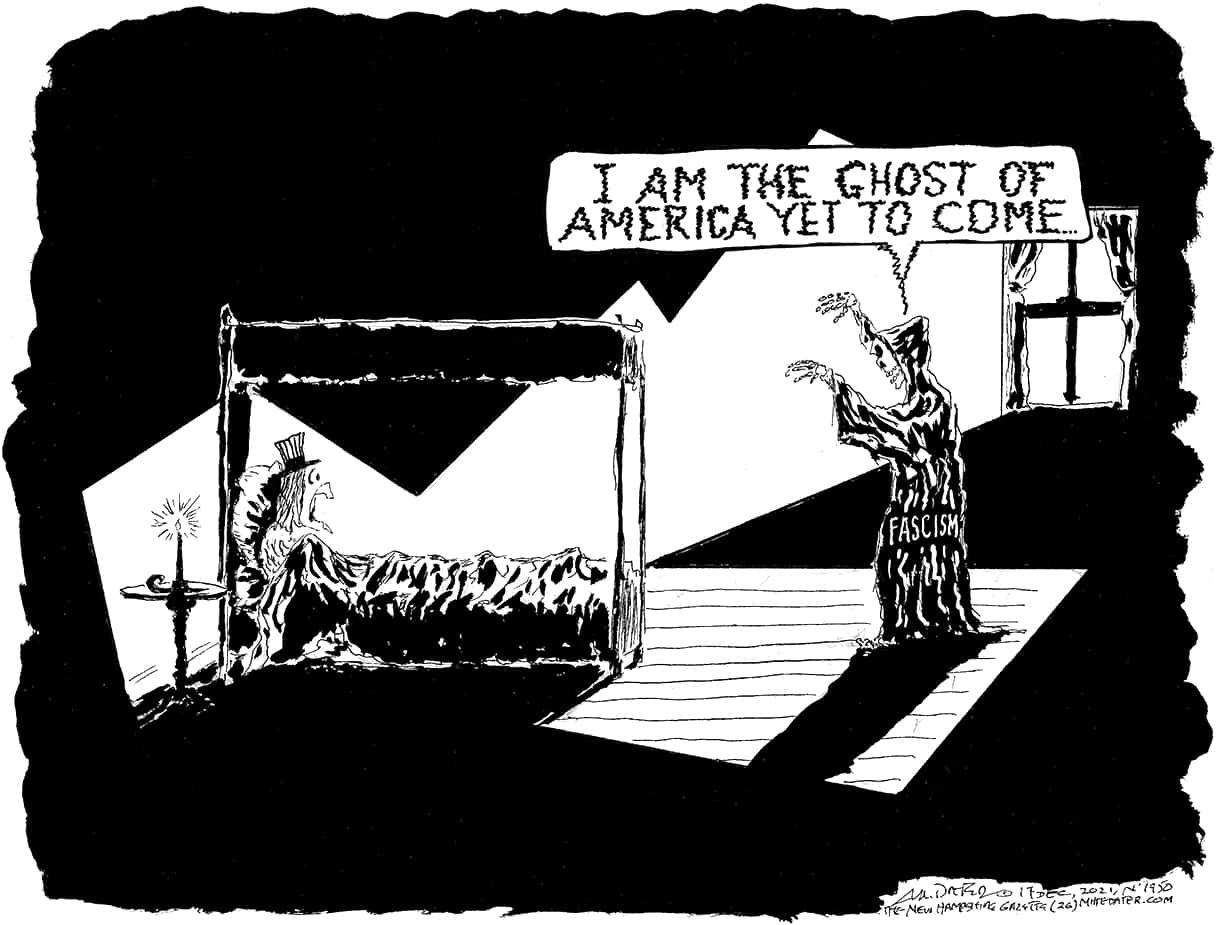 Another fortnight, another resounding “Thunk,” as Uncle Sam’s top-hatted noggin slams into yet another landing during his violent and interminable descent down the endless staircase leading to democracy’s crypt.

Did he fall? Or was he pushed?

Oh, please. We are the nation’s last living exemplar of a truly free press. Do not expect us to mimic our corporate competition by pretending to be even stupider than we actually are.

Following the incoherent barking of their malevolent leader, the members of Cult #45 have volunteered enough of their warm if not necessarily sapient bodies to give the Covid-19 virus the opportunity to develop a new mutation which has made it hyper-contagious and better able to evade our vaccines. As a result, our hospitals and health care workers, already pushed to their limits, may now look forward to a winter which promises only to get worse.

Due to the iron Law of Irony, the areas of the country which will suffer the most will be those where the Cult is strongest. Status used to be hard to get. It was largely obtained by accruing wealth. Now, in red states, status can be acquired by anyone, simply by refusing vaccines and masks.

One would like to think that Darwinism would eventually, if brutally, bring this episode—perhaps the greatest mass murder/suicide in human history—to a close. To quote Saint Ronald, “If it takes a bloodbath, let’s get it over with.”

If only it were that simple. The nation’s sharpest and most amoral political minds—which invariably sign on to the team with a winning track record—are using all their exquisite skills to assure that that dwindling minority will continue to rule until climate change becomes so disruptive as to induce overall societal chaos, thus rendering our form of government moot.

We are humans, though. As Faulkner loved to remind us, somehow we will endure…for better or worse. The question is, how much will we have to endure? The answer seems to be, a lot.

Just last week a storm system stretching from Toronto to Houston spawned colossal tornadoes which erased a number of towns in Kentucky. On Wednesday, hurricane-force winds were predicted across the Plains states. In Oymyakon, in Siberia, where it’s -76° F—the coldest inhabited place on Earth—“zombie” peat fires now burn all year ’round.

By now, everyone still capable of absorbing information understands the climatic changes which led up to these events. More recent environmental news makes it plain that, like old age, the future is not for sissies.

MIT reported troubling news Tuesday about the Atlantic Meridional Overturning Current [AMOC—the local stretch of which is called the Gulf Stream. We’ve long known that AMOC was susceptible to a “tipping point,” i.e., that certain climatic conditions could possibly cause that vital global current to dramatically slow or stop. Now scientists have found that their existing models of AMOC have been flawed by “a bias toward stability.” In other words, they have underestimated the chances that it might slow down or stop.

A recent study concluded the system could also be vulnerable to a lesser-known phenomenon: the rate-induced tipping point. If AMOC’s rate of flow changes too quickly, “one of the most important forces in the planet’s climate system” could shut itself off.

Now, one last bit of environmental news before we return to the mire of politics.

The Washington Post reported Monday that the ice shelf where the Thwaites Glacier meets the Antarctic Sea “could shatter within the next three to five years.” Scientists are concerned, to employ an industrial-strength euphemism, because “when the shelf fails, the eastern third of Thwaites Glacier will triple in speed, spitting formerly landlocked ice into the sea. Total collapse of Thwaites could result in several feet of sea level rise, scientists say, endangering millions of people in coastal areas.”

Mankind has faced innumerable challenges since the day when our ancestors dropped from the trees and began exploring the great savannah. Of course, they did have one advantage: they had no idea what they were up against. We’ve got a rough idea what’s coming, so we not only have to face it, we’re doomed to worry about it beforehand.

Worst of all, while most of us have a pretty good idea what needs to be done to reduce our future suffering, those who are in positions of power seem to be determined to do the wrong things.

If it were still just us folks, sitting around a fire, with wolves and worse howling off in the dark, we’d likely know exactly what to do: gang up on the troublemaker, beat the living crap out of him—because of course it would be a him—and send him off into the dark.

Now we’re civilized, and there are too many of us for that to work. And there’s one other problem.

Here’s an example of that problem in action: on Monday, the New York Times compared emails sent by the Democratic and Republican parties. Bowing to their self-proclaimed God of Objectivity, they jammed the issue into a “both sides do it” frame.

“Both parties delivered heaps of hyperbole in their emails,” readers were informed. “One Republican, for instance, declared that Democrats want to establish a ‘one-party socialist state,’ while a Democrat suggested that the party’s Jan. 6 inquiry was at imminent risk because the G.O.P. ‘could force the whole investigation to end early.’”

As writer Kaili Joy Gray tweeted, “Wait. How are these equivalent in any way? One is a lie and one is true.”

Now for the bad news. Due to its insidious nature, the Omicron variant is expected to sweep into this area like [insert historical precedent of choice]. That could render our current modus operandi inadvisable. If you don’t see us in the usual places—your own mailbox included—look for us at www.nhgazette.com.