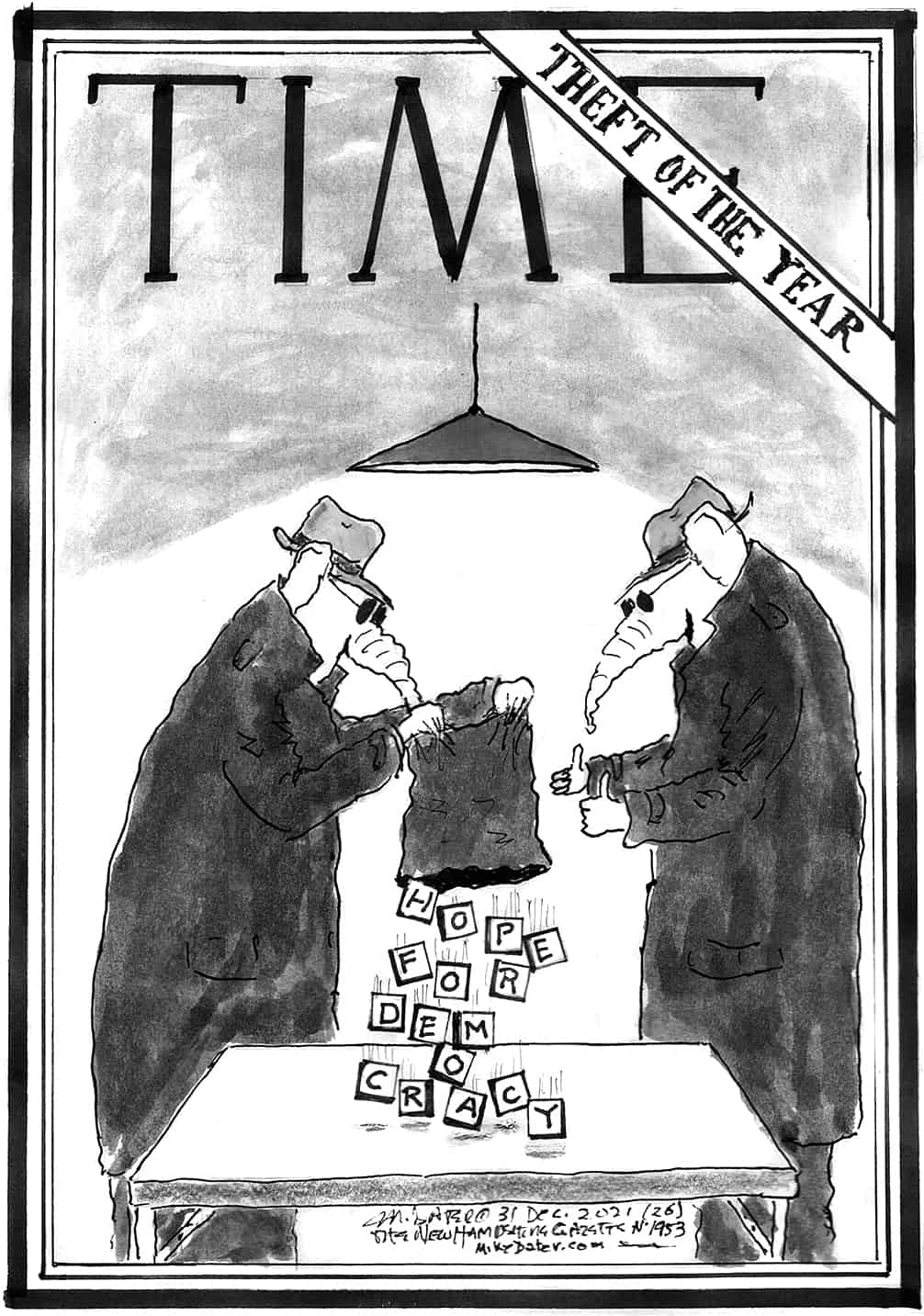 Time Magazine’s “Man, Woman, Thing, or Random Editorial Notion of the Year” is a promotional stunt masquerading as a tradition. Every year, though, Americans* pay attention to it. Why? Ask Charlie Brown why he lands flat on his back every fall.

This annual marketing ritual does have one saving grace: it reliably provokes the savage wit of our Starving Artiste. The magazine misfired badly by featuring a billionaire who wants to go to another planet without having understood this one. Mr. Dater, on the other hand, has once again pinpointed—or pen-pointed—the single most salient thing going on today. Our only quibble is that “…of the Year” is the understatement of the century.

Cheap flim-flammery is all we should expect from a rag with such a pernicious history; in its 98 years, Time the magazine has done more damage than the natural phenomenon after which it is named. Much of that history is archived in the pages of Henry Luce’s weekly news magazine. Don’t take Time’s version at face value, though. Many essential elements are missing, especially certain linkages which would help to explain a great deal of the 20th century’s bloodshed.

Luce was born in China, the son of a Presyterian missionary. That personal connection convinced him, despite ample evidence to the contrary, that he knew all anyone needed to about the Celestial Empire. In this he greatly resembled a powerful contemporary with a similar, if less respectable, connection. President Franklin D. Roosevelt’s grandfather Warren Delano Jr. had made the family’s fortune by smuggling shiploads of opium into China. In fact, many “respectable” American fortunes were founded by 19th century drug pushers.

Even Luce, the missionary’s son, had his own connection to the opium racket. His was just a few steps further removed, in the person of a one-time Person of the Year.

At the height of its power, from the 1930s through the 1970s, Time was a mighty megaphone for the China Lobby. Unelected, uncredentialed, and unchecked, the China Lobby practically dominated U.S. foreign policy.

Mussolini, Hitler, and Stalin were the “strong men” of Europe. Luce tried to mold his own strong man in China.

In 1937 Time named Generalissimo Chiang Kai-shek and his wife Soong Mei-ling—referred to as “Madame Chiang,” of course—as its International Man & Wife of the Year. A rare honor, perhaps, but the couple had appeared on the cover before, in 1931.

That’s a lot of hype to lavish on one man, even a supposed ally—particularly when that ally’s corruption was so pernicious that it led FDR to OK his assassination.†

FDR’s ire stemmed from Chiang’s habit of demanding ever-greater amounts of aid to support his starving, ill-equipped Koumintang troops. Never mind that they were starving because Chiang was raking off much of the money, or that when it came time to fight the Japanese, or later the Communists, his troops were elsewhere, and otherwise occupied. Among the Koumintang’s other occupations, opium smuggling ranked high.

Despite his innumerable flaws and failings, Chiang remained a hero in the pages of Time. Its constant cheerleading on behalf of the China Lobby diverted assets from the fight against Japan, and set the stage for wars in Korea and Vietnam.

We have offered this forced march down memory lane with a sense of nostalgia for a better, happier time. Sure, the world was at war everywhere you looked, even as our weapons became ever more frightening. Bellicose fools seemed determined at every junction to make things worse by hook or by crook.

But all throughout we had the hope—perhaps not well-founded, but hope it was—that we might turn things around. Within living memory we had seen peace treaties signed, followed by periods of prosperity.

Most people believed that most other people just wanted a chance to make a decent living so they could raise their families in peace. How could that be too much to ask? Especially here, in the biggest, strongest country on Earth. That ought to matter, right?

The moral and political successors to the China Lobby think there has been entirely too much democratizing going on around here.

Bolstered, like Luce, by the strength of their misguided opinions, they have diligently labored to make sure that policies the public favors by two-to-one majorities don’t stand a chance in Congress.

If the people don’t like it, let them pester the Supreme Court, where perjurers in black robes can solemnly pronounce their concerns to be irrelevant and immaterial.

We have even lost the comforting notion that we might be overstating the magnitude of the threat. Former New Hampshire Supreme Court Chief Justice John Broderick wrote on Monday, in the Hollowed Out Local Daily, that “Republicans in Congress and…legislatures across the country are actively working to grind our democratic process to a halt and replace it with autocratic rule.”

Having stolen nearly everything that’s not nailed down, the GOP has taken to toting claw hammers and crowbars.

Certain things, though, can never be stolen, only cherished and used, or surrendered: our hope, and our will to fight back.

* For the purposes of this Rant we will write as if the Americas were uninhabited outside the U.S.A. Our apologies to the non-U.S. citizens who outnumber us by a margin of two-to-one.

† The bumpoff was requested by General “Vinegar Joe” Stillwell, FDR’s liaison to Chiang’s Koumintang, and was thwarted by—surprise, surprise—the China Lobby. See our Volume 265, No. 19; June 4, 2021.