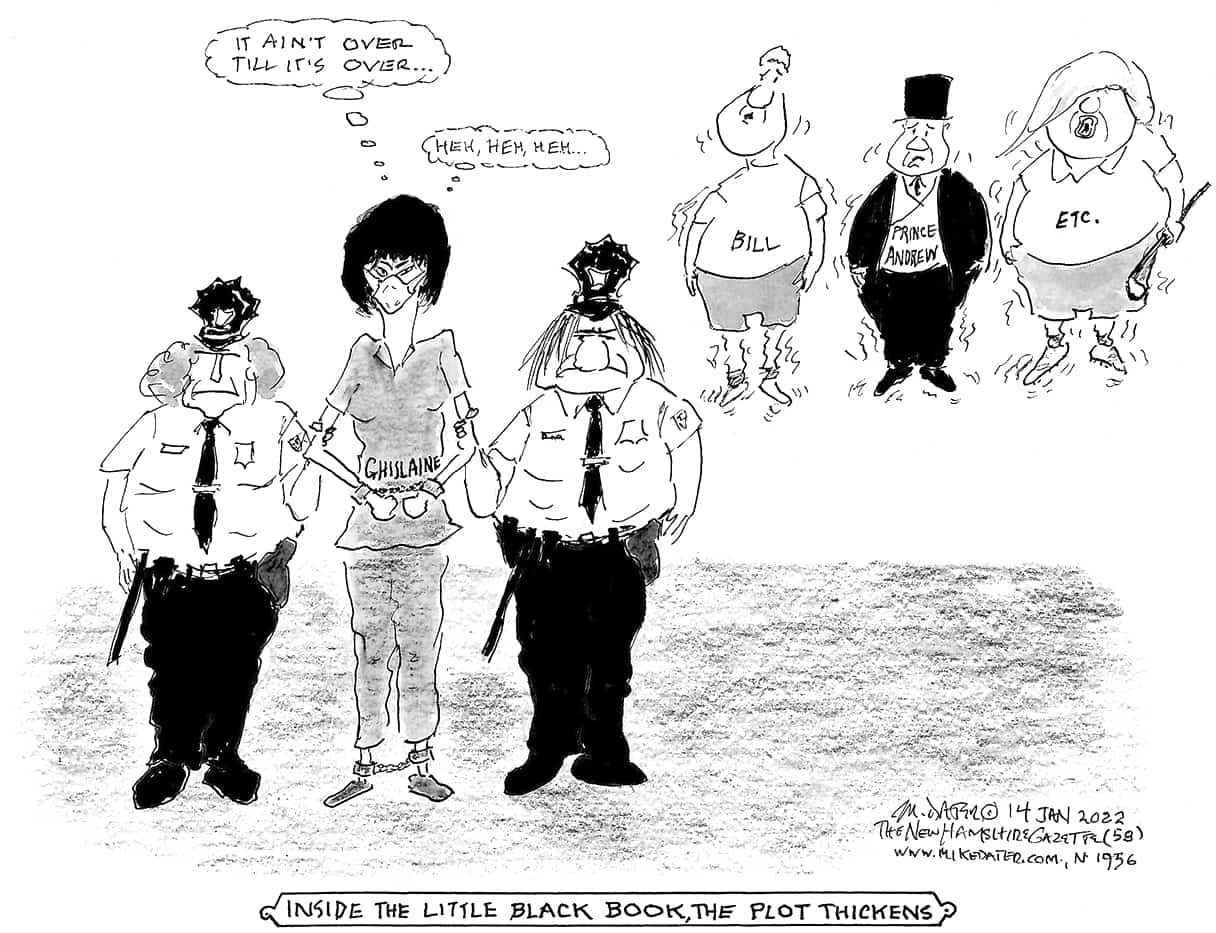 Letting the Cat Out of the Bag

“What did you tell that man just now?”

“What right do you have to tell him to hurry?”

“Where do you get the money?”

“Who makes the products?”

“How many products does he make in a day?”

“Then, instead of you paying him, he pays you $6 a day to stand around and tell him to hurry.”

“Well, but I own the machines.”

“How did you get the machines?”

“Sold products and bought them.”

“Who made the product?”

Oh, for the days before consultants got involved, and workers organized by talking to each other in language everyone understood.

Stumbling across the little gem reprinted above got our curiosity cranked up. A little digging revealed that—quelle surprise—the Automobile Worker cribbed the bit from a 1912 issue of Land & Liberty Magazine.

To our surprise, Land & Liberty, founded in 1894 to represent the ideas and policies of Henry George, is still being published, and is available online at henrygeorgefoundation.org.

Ask someone nowadays about Henry George and all you’ll get for an answer is Henry who? In his day, though, he was somebody. He deserve to have his somebodyhood restored—and we the living would certainly benefit from his ideas and policies.

According to our old fiend Wick E. Pedia, Henry George (1839 – 1897) was an American political economist and journalist whose writing was immensely popular in 19th-century America, sparked several reform movements, and inspired the economic philosophy known as Georgism. His 1879 book Progress and Poverty—which sold millions of copies worldwide—“investigates the paradox of increasing inequality and poverty amid economic and technological progress.”

Somehow that still sounds vaguely relevant today. We won’t try to sum up his life’s work here; his death will provide a measure of his impact. Weakened by a stroke in 1890, George ran for Mayor of New York in 1897 anyway. He died four days before the election. A hundred thousand people viewed his coffin; two thousand marched across the Brooklyn Bridge for his funeral.

Largely forgotten now, his influence can be found. Unfortunately, those who run our economy prefer not to upset a system which serves them so well—and the rest of us so poorly.

FDR, MLK and Einstein all spoke highly of George and his works. The most ubiquitous evidence of his existence, though, can be found in closets all across the country. Elizabeth Magie (1866–1948) was an advocate of Georgism. In 1904 she was granted a patent for “The Landlord’s Game”—a board game designed to show the principles of Georgism at work.

After thirty years of permutations, Parker Brothers bought the rights, and turned a game designed to promote fairness and equity into one which celebrates acquisition, greed, and, of course, “Monopoly.”

It’s a signature object of the early 21st century: a corrugated plastic sign. They’re cheap and durable—probably too durable—and therefore ubiquitous. This one, though, at the corner of Marcy Street and New Castle Avenue, is a little different. We first saw a photo of it January 3rd, on the Twitter feed of former Herald reporter Elizabeth Dinan. It says, “Jake, Tell Biden: No First Use — No New Nukes.” Our Wandering Photographer went out last Saturday and found that it’s still in place, though plastered with snow. Such are the times in which we live: you may find a plea on a street corner from one neighbor to another, asking him to use his influence on the President to lessen the chances we’ll all die in a nuclear war.

The Flag Police Are Appalled

According to the City of Portsmouth’s tax map, the three big apartment blocks on Madison Street were sold on December 13th. This is of interest because, as a general rule, few things matter more in this country than who owns what.

The Flag Police, of course, take no position on these matters. It is their custom, however, to routinely consider property ownership in order to establish who may be responsible for any given U.S. flag.

Ordinarily, the City’s tax map would make it clear whether the previous owner, 184 Madison St LLC, or the current owner, AAM Portsmouth Residences LLC, allowed this nearly-bifurcated flag to deteriorate into its present deplorable condition.

Thanks, though, to the high quality image provided by a stalwart but anonymous member of the Flag Police, it has been established after careful analysis that there is no way a flag could possibly have suffered so much damage in a matter of one month.

So, they’re both busted.

The parties behind 184 Madison are no longer in a position to remedy this situation. It’s all on AAM Portsmouth now. Can they handle it?

As it turns out, the founder and CEO of that LLC lists himself openly on LinkedIn. We’ll not get into the personal details, but the LLC’s general condition seems worthy of consideration:

With all the cushions in all the couches in all those properties, surely AAM can scrape up enough change to retire this flag and replace it with a new one.

For 98 fortnights now, since a fire destroyed the old State Street Saloon, we have either complained, or been remiss in failing to complain, about the way the Times Building was being left exposed to the ravages of the elements. From time to time some fitful effort would be made, but flimsy plastic is no match for New England weather. Eventually, this historic link to the past—the newspapering past, at that—would collapse. This past Saturday, though, our Wandering Photographer captured this semi-glorious sight: all the burned-out windows are now protected with plywood! What could be more welcome than a sign of hope in the depths of winter?

Manchin Won’t Support His Own Bill

U.S. Sen. Joe Manchin came under fire Saturday after The Washington Post reported that the West Virginia Democrat “does not currently support” passing even his own recent $1.8 trillion counteroffer to President Joe Biden’s Build Back Better agenda.

“Sen. Manchin is operating in bad faith,” tweeted Nida Allam, a progressive congressional candidate in North Carolina. “We need to be electing Democrats who are accountable to the American people and working families—not Dems who are reneging on deals which would support millions.”

Journalist Judd Legum, who runs the newsletter Popular Information, said that “if you were a fossil fuel lobbyist and had to construct an ideal strategy not only to kill BBB but to gum up the works for as long as possible it would look a lot like what Manchin has been doing.”

In a secretly recorded conversation published last summer by Unearthed, Greenpeace U.K.’s investigative journalism arm, a lobbyist for fossil fuel giant ExxonMobil said of Manchin, “I talk to his office every week.”

Since then, House Democrats have passed a watered-down version of the Build Back Better package. However, progressives within and beyond Congress have grown increasingly alarmed about the bill’s future, especially after the lower chamber caved to a few members of their own party and decoupled it from bipartisan infrastructure legislation.

Rep. Ilhan Omar (D-Minn.), one of the six progressives to oppose the decoupling, warned at the time that “passing the infrastructure bill without passing the Build Back Better Act first risks leaving behind child care, paid leave, healthcare, climate action, housing, education, and a roadmap to citizenship.”

Manchin—who, along with Sen. Kyrsten Sinema (D-Ariz.), has long held up a vote on the Build Back Better Act in the upper chamber—confirmed Tuesday that he is not currently talking with the White House about the package, telling reporters that “there is no negotiation going on at this time.”

Citing three unnamed sources, the Post’s Jeff Stein revealed that “privately, he has also made clear that he is not interested in approving legislation resembling Biden’s Build Back Better package and that Democrats should fundamentally rethink their approach.”

“Senior Democrats say they do not believe Manchin would support his offer even if the White House tried adopting it in full—at least not at the moment—following the fallout in mid-December,” Stein continued, referencing a pair of White House statements that called out the senator by name and a Fox News appearance in which Manchin blasted the bill.

In response to Stein’s revelation that Manchin’s offer “may no longer be on the table,” Jake Sherman of Punchbowl News tweeted that “it’s definitely not.”

“As of now, I have no reporting that Manchin will get back up to [$1.8 trillion]. I talk to him nearly every day and he continues to be exceedingly skeptical of anything,” Sherman said. “Now, could something happen? Sure. Could it happen at [$1.8 trillion]? Maybe. Is that likely today? It doesn’t seem so.”

Along with cutting the expanded child tax credit, “Manchin’s offer included no funding for housing and no funding for racial equity initiatives,” according to the Post. His proposal also retained tax increases opposed by Sinema, and though it featured “substantial new climate funds, the underlying policy details of his proposed climate provisions remain unclear and could have proved difficult for the White House to ultimately accept.”

Getting the Build Back Better Act through the Senate requires support from every single member of the Democratic caucus. Though they can use the budget reconciliation process for that package, other bills are being blocked by the legislative filibuster—which Democrats could abolish with majority support, but Manchin and Sinema oppose doing so.

With the Build Back Better agenda stalled, Senate Democrats have shifted their focus to voting rights legislation. While Senate Majority Leader Chuck Schumer (D-N.Y.) recently vowed to change the chamber’s rules to advance such bills by January 17th, progressives argue picking between the sweeping package and protecting U.S. democracy is a “false choice.”

Progressive campaigners plan to keep pushing for Congress to get the Build Back Better Act to Biden’s desk, Alex Lawson, executive director of Social Security Works, told the Post.

“The policies we’re fighting for—like letting Medicare negotiate prices—are incredibly popular in West Virginia, and Manchin is clearly not listening to people in his state,” he said. “Biden has to bring the full weight of the presidency to bear on Joe Manchin to get his vote to get Build Back Better across the finish line.”

“I know the grassroots are not in any way giving up on Joe Manchin,” Lawson added, “and we’ll make it harder and harder for him to not listen to what the people in West Virginia are demanding he do.”

Our Revolution agreed that the president “must use his power to deliver his full agenda,” declaring that “it’s the bare minimum to address the crises we face and begin to restore the trust of voters.”

A New Hampshire House committee is taking up a bill which would decriminalize the use of psilocybin mushrooms, NHPR’s Josh Rogers reported Wednesday. Rogers quoted Ian Freeman, a Free Stater from Keene, telling lawmakers, “It can be a life-changing experience to take mushrooms.”

We can’t argue with that. Advocacy of mushrooms, though, coming from Ian Freeman, merely shows that mushrooms alone do not necessarily confer enlightenment.

Another item on Freeman’s agenda: promoting New Hampshire Constitutional Amendment Concurrent Resolution 32, in which the state “peaceably declares independence from the United States and proceeds as a sovereign nation.”

Freeman’s freedom is currently contingent on $200,000 bail. Feds have charged him with money laundering in connection with his Bitcoin business.