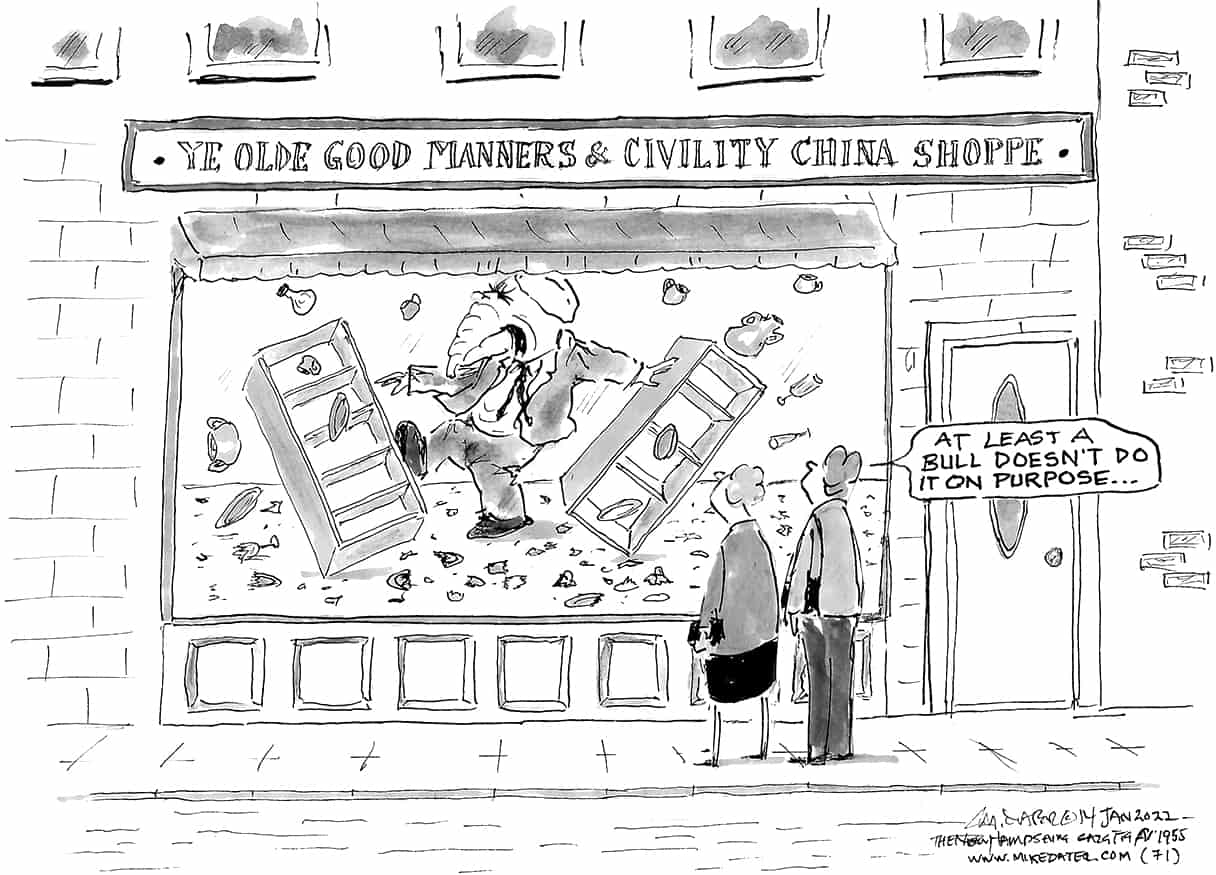 Focus groups have determined that when given a choice, people prefer hearing about lost puppies being found to staring into an existential abyss. Oh, well…here we go again, anyway.

Pardon us while we state the obvious. While we’re at it, let’s print something that’s not even news: ordinary Americans haven’t been screwed this hard since Herbert Hoover was President. A couple of recent tweets can sum it up as well as anything we could write:

Andrew Lawrence [@ndrew_lawrence]: “What if the reason kids are depressed is [because] they realize they’re living in a dying state with no hope for upward mobility and they’re expected to start their adult lives [with] $100k in debt and no real job prospects, but [I’m] no expert maybe it’s actually masks and zoom classes.”

Now for the news—bad news, of course: under plans long in the works, this current dismal state of affairs is just a warmup for what’s coming.

The nation slowly sank into its present condition over the course of forty years of unscupulous post-Gingrichian Republicanism and feckless Democratic “resistance”—resistance, primarily, against offending wealthy campaign donors—mostly according to the provisions of the U.S. Constitution. The 2000 Presidential election was, of course, a brazen theft.

Now Republicans, having gotten their greedy hands around the neck of this goose that lays golden eggs, want to lop off its head. The usual suspects are pushing an Article V Convention of States. It would have essentially unlimited power to rewrite—or throw out—the old Constitution.

According to Sourcewatch.org, potential outcomes “range from redefining the Commerce Clause to prohibit Congress from enacting protections against child labor laws, to adding a balanced budget amendment to the Constitution. [The Koch-funded Aamerican Legislative Exchange Council] has published a “how-to” manual for an Article V constitutional amendment and offers a “model” resolution, the “Balanced Budget Amendment Resolution.”

Why so radical? Again we turn to the Twitter, the poor man’s AP news feed. On January 3rd, John Nichols [@NicholsUprising] wrote: “Republican have since 2016: Lost swing-state governorships in WI, MI and PA. Lost the U.S. House. Lost the U.S. Senate. Lost the presidency, as five swing states shifted to the Democrats. No wonder the GOP is desperate to dismantle democracy.”

The men who wrested this country from Britain—and from its indigenous inhabitants—were tremendous fans of the Roman Republic. They consciously sought to emulate it when they founded the U.S.A., and they did a hell of a job. For half a millenium Rome was governed by a political system which—allowing for a few inconsequential technical distinctions—was nearly identical to the one Americans suffer today. *

A small, wealthy, pampered sector of the population rotated through the positions of power and ran the show. Being in power, the policies these patricians pursued were ultimately based on providing benefit to themselves and their class. Conflicts between factions within this group were resolved by a range of tactics from negotiation to murder. The only limit on their pursuit of self-interest was an intuited feeling: “What can we get away with?”

A larger, semi-elite sector consisted of landed gentry—an early form of agribusiness. Many others were rural farmers with more modest holdings. The majority of Romans were either working stiffs—the lucky ones—or enslaved. Substitute “imprisoned” for “enslaved,” and for all practical purposes you’ve pretty well got a match. †

As if the familiarity of these ancient stratifications were not sufficient evidence of the success of our Founding Patricians, try this on for size: the Roman Republic was at war almost constantly throughout its 500-year run.

There was an inherent weakness in this system. The fault line lay in the accuracy with which pampered patricians could divine the mood of the plebians—a huge mass of people whose life experiences were radically different from their own.

On at least four occasions, the patricians guessed so badly wrong that something had to give.

In 494 BC an ex-military official showed up at the Forum in a state of disarray. Unable to pay a tax, he had borrowed to do so at usurous rates. When he was unable to repay, his creditors had him thrown in prison and beaten. Empathetic plebians sided with the bedraggled official, and a rowdy crowd assembled.

The consul Appius Claudius Sabinus Regillensis misread the room. In a bold but stupid move, he passed decrees reinforcing the rights of creditors to jail debtors.

At this point a plebian named Lucius Sicinius Vellutus—whom our Founders seem not to have quoted much—proposed that the plebians leave Rome en masse, set up camp on Mons Sacer, three miles out of town, and let the patricians find out how they liked fending for themselves.

The people put Velletus’ plan into action, and lo and behold: it worked. Representatives from the Senate went to Mons Sacer and negotiated with the plebians. Debts were cancelled, and the Tribune of the Plebs was established—with the power to veto actions of the Senate.

The plebians found this result of the first secessio publis so gratifying that they repeated the process four more times over the next 200 years—each time winning significant concessions.

* Caveat lector: this analysis is not based on years of academically-sanctioned, peer-reviewed scholarship. Rather, it draws whatever authority it may have on autodidactic chutzpah and a lifetime of observation.

† Some may object to this assessment; we USAians do love to pride ourselves on the permiability of our class distinctions. That permiability is a myth which survives only thanks to a fig leaf provided by a certain genre of “news” stories, long popular in the mass media. The fact that an occasional photogenic “exception” may be featured merely goes to illustrate that the underlying rule—our class structure—is intact.