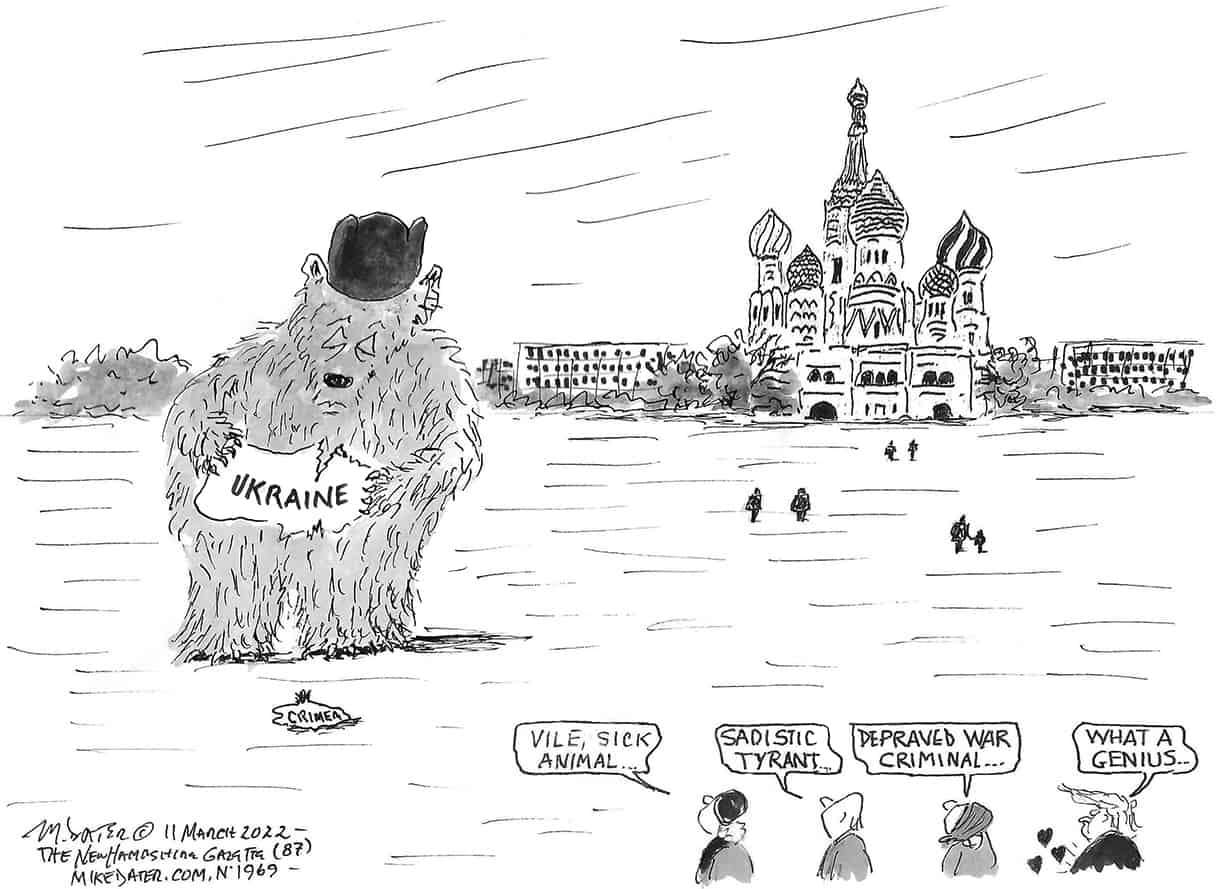 It’s all a bit much, so let’s break it down into smaller pieces. We’ll begin with the most volatile issue. Then we’ll assess the threats which, should they succeed, will take longer to annihilate us.

A week later, as Americans went to bed, news outlets reported that a battle between Russians and Ukrainians had set the largest nuclear power plant in Europe on fire. That emergency has apparently been resolved, and yet things may have gotten worse.

On Wednesday of this week, we learned that the decommissioned ruins of Chernobyl—captured by Russians on February 24th—had been disconnected from the high-voltage electrical grid, and the pumps cooling the reactor cores had only enough diesel fuel to last 48 hours. Ukraine is Eastern Orthodox territory, but clearly what is needed here is a Maccabean miracle.

Many people find it deeply uncomfortable to know they have no control over a threatening situation. Some people find that having information about that threat can ameliorate that discomfort.

OK, that’s enough of that for now. We’re allegedly professionals, but everyone has limits—Joey “Jaws” Chestnut has never downed more than 76 hot dogs at one sitting. Let us turn to Mother Nature for solace in these trying times.

Uh-oh. Bad idea. Looks like prostituting the old gal has had some dire consequences.

Australia is essentially a desert surrounded by water. Lately it’s been under water. Brisbane, in the middle of the east coast, was hit by a four-day “rain bomb” in late February. Then it was Sydney’s turn. The east coast of Australia got a year’s worth of rain in a week. Twenty people were killed and sixty thousand have been evacuated.

Scientists are loathe to attribute specific weather anomalies to global heating. [Warming is passé now.] There are two reasons for this. First, being scientists, they understand that correlation does not equal causation. They require hard evidence. That’s harder to come by in climate science than on TV cop shows. Second, they’re sentient human beings. They know that if they are not exceedingly careful, the fossil fuel industry’s propagandists will put an early end to their careers.

Now that reticence seems to be dissipating. On February 28th, the Intergovernmental Panel on Climate Change (IPCC) issued a report which began, “Human-induced climate change is causing dangerous and widespread disruption in nature and affecting the lives of billions of people around the world, despite efforts to reduce the risks. People and ecosystems least able to cope are being hardest hit….

“The world faces unavoidable multiple climate hazards over the next two decades with global warming of 1.5°C (2.7°F). Even temporarily exceeding this warming level will result in additional severe impacts, some of which will be irreversible. Risks for society will increase, including to infrastructure and low-lying coastal settlements. …

“Increased heatwaves, droughts and floods are already exceeding plants’ and animals’ tolerance thresholds, driving mass mortalities in species such as trees and corals. These weather extremes are occurring simultaneously, causing cascading impacts that are increasingly difficult to manage. They have exposed millions of people to acute food and water insecurity, especially in Africa, Asia, Central and South America, on Small Islands and in the Arctic.

“To avoid mounting loss of life, biodiversity and infrastructure, ambitious, accelerated action is required to adapt to climate change, at the same time as making rapid, deep cuts in greenhouse gas emissions. So far, progress on adaptation is uneven and there are increasing gaps between action taken and what is needed to deal with the increasing risks….”

In other words, things are getting worse faster than we thought. We have some idea of what to do, but we’re not doing it nearly well enough. And, as conditions get worse, so does our performance.

We can’t claim to have read all 3,600 pages of this document. Fortunately that was not necessary. If, anywhere in those 3,600 pages, the IPCC had the following, we would have heard about it:

“There are two great obstacles preventing ‘ambitious, accelerated action required’ to save us: the fossil fuel industry that created the problem, and the political system that protects it.”

If that seems overstated, consider this: the same day the IPCC issued its dire warning, the U.S. Supreme Court hosted oral arguments on West Virginia vs EPA.

The Court could have told the plaintiff  to go pound sand. Instead it chose to give itself the option of preventing the EPA from regulating carbon dioxide emissions—that is, trying to save the planet. Three of these knuckleheads—please pardon the legalese—were appointed to the Court by The Former Guy.

The Former Guy was the preferred candidate of the criminal running and ruining Russia. There’s a theory afoot which says Pooty-Poot Putin—pal of Bush #43, idol of Dolt #45, icon amongst the members of the NRA—wanted the Republican candidate to win in 2016 so that a $500 billion deal between Exxon and Rosneft might succeed.

In the Oval Office on May 10, 2017, The Former Guy played host while Secretary of State and former former Exxon CEO Rex Tillerson yukked it up with Russia’s Foreign Minister Sergei Lavrov and Ambassador to the U.S. Sergey Kislyak.