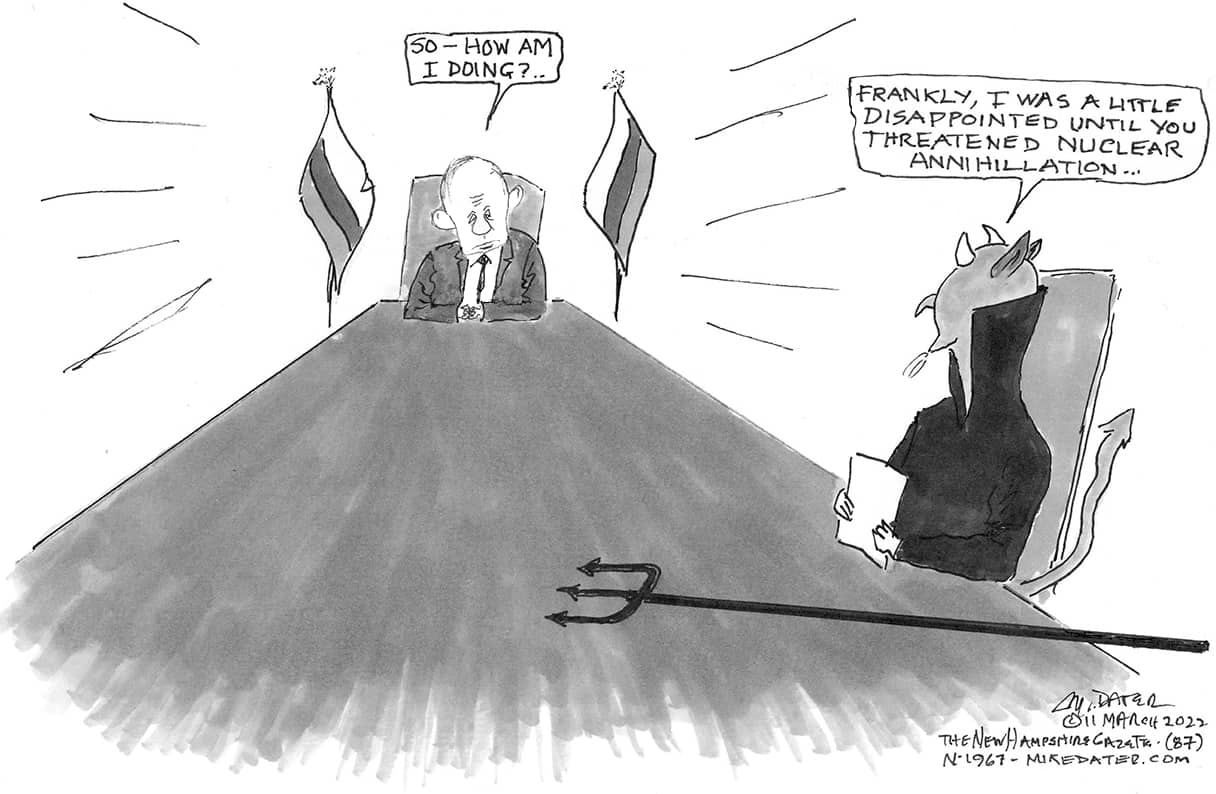 From President Biden’s State of the Union:

“Tonight I say to the Russian oligarchs and corrupt leaders who have bilked billions of dollars off this violent regime: no more.

“The U.S. Department of Justice is assembling a dedicated task force to go after the crimes of Russian oligarchs.

“We are joining with our European allies to find and seize your yachts, your luxury apartments, your private jets. We are coming for your ill-begotten gains.”

With these words, the president unintentionally laid out a blueprint for responding to the American oligarchs, superpredators who dwarf their Russian counterpoints in wealth and political power.

Oligarchs in a Violent Regime

About that “violent regime” business: It’s possible to condemn the violence perpetrated by Russia’s government while at the same time recognizing and condemning our own. Our direct attacks on Iraq and Afghanistan, among other countries, have been matched by the proxy violence we have funded in nations like Palestine and Syria. Our sanctions have taken countless lives around the world, a form of bloodshed we pretend isn’t warfare.

America’s oligarchs, like their Russian counterparts, have bilked billions—no, make that trillions—from their own regime. Some of their bilking comes directly from its violence, in the form of “defense” contracts to entities like Halliburton, Lockheed Martin, and the Carlyle Group.

A 2014 Princeton political science study showed that government actions nearly always conform to the wishes of wealthy and powerful U.S. elites. “Our central finding was this: Economic elites and interest groups can shape U.S. government policy—but Americans who are less well off have essentially no influence over what their government does,” wrote co-authors Martin Gilens and Benjamin Page.

America’s oligarchical influence extends from healthcare and fossil fuels to the industry of war itself. American companies account for more than half of all arms sales worldwide. The Center for Responsive Politics reports that “in the past two decades, [the arms industry’s] extensive network of lobbyists and donors have directed $285 million in campaign contributions and $2.5 billion in lobbying spending to influence defense policy.”

Arms manufacturers (more commonly known by the Orwellian appellation, “defense industry”) shrewdly concentrate on hiring ex-government officials to advance their agenda and pump up their ill-gotten gains. This ensures that their interests are represented by people who know the officials they’re lobbying. Even more importantly, it puts those officials on notice that there is a lucrative future in store for them if they play along. Arms oligarchs have hired more than 200 lobbyists who, in the report’s words, “have worked in the same government that regulates and decides funding for the industry.”

Arms manufacturers played a dominant role under Trump, but are also well-represented in the Biden Administration:

“While Biden has touted strict ethics rules that attempt to thwart the influence of lobbyists on the administration, several of his earliest appointees, including Secretary of Defense Lloyd Austin and Secretary of State Antony Blinken consulted for a private equity firm that emphasized its “access, network and expertise” in the defense industry. Austin also had a seat on the United Technologies and Raytheon boards, earning more than $250,000 from the now merged companies.” 1

It’s not just the arms industry, of course. Other oligarchs have bilked the people of the United States in more creative ways. Jeff Bezos built his Amazon empire off his ability to sell products online without charging sales tax. This government-granted loophole made him an oligarch, a position he has used to further cement his power and influence. He has purchased the most influential paper in the nation’s capital—an oligarch’s move if there ever was one—while constantly extending his monopolistic power into new markets.

Despite the fact that he already possessed great wealth, Elon Musk has received billions in subsidies and contracts for his automobile and space ventures. Bill Gates parlayed a government contract and some aggressive patent strategies into his own oligarchical status. Insurance executives have bilked billions from the violence of our privatized healthcare system, which takes an estimated 45,000 lives per year.

Money, of course, is only part of an oligarch’s wealth. President Biden also mentioned the property that belongs to Russian oligarchs: “your yachts, your luxury apartments, your private jets. We are coming for your ill-begotten gains.” (He meant “ill-gotten,” but I suppose you could call such malapropisms part of Biden’s charm.)

Russians own an estimated 7-10 percent of the world’s superyachts, leaving plenty for their American counterparts. Luxury apartments? Check out “New York Condo Sells for Close to $190 Million; Hedge-Fund Billionaire Doubles His Money.”  Private jets? Jeffrey Immelt, job outsourcer and financial predator at GE, used to take two jets when he traveled so that he’d have a spare—and charged it back to GE’s shareholders.

We’re told that the Russians whose yachts have been seized include Alisher Usmanov, whose net worth is $20 billion, and Alexei Mordashov, whose wealth is described as “nearly” $30 billion. Compare that with Elon Musk, who’s worth nearly $300 billion, or Jeff Bezos at $202 billion. These guys are pikers.

Globally, in the U.S.-led world financial order, billionaires have gained $5 billion in wealth since the pandemic began. Think of our economic leadership as a “global endowment for oligarchy.” Oxfam reports that the ten richest men in the world (yes, they’re all men) own more wealth than the bottom 3.1 billion people (“six times more, in fact”). Oxfam also notes that “if the 10 richest men”—nine of whom live in the U.S.—”lost 99.999% of their combined wealth, they would still be richer than 99% of the world.”

No industry has taken more advantage of government-granted patent monopolies than Big Pharma. Even when its oligarchs misled the country into an opioid epidemic—one of the largest mass-casualty events in American history—they are able to escape criminal culpability for their actions.

Then came Covid-19. As Forbes reported in January, U.S. billionaires held an estimated $3.5 trillion before the pandemic struck, a figure that reached nearly $5.3 trillion two years later. That’s $1.8 trillion in gains, divided among only twenty oligarchs. Musk led the pack, with Bezos in second place. The billionaires’ list is a cavalcade of monopolists and speculators whose wealth has been fueled by their government’s benign view of their predatory business practices.

Once the pandemic hit, Big Pharma’s oligarchs were able to parlay their political power into exclusive patent rights for Covid-19 vaccines. Moderna made $17.7 billion from its vaccine in 2021 and anticipates making $22 billion this year, from a formula developed with $2.5 billion in funding commitments from the U.S. government. The money from these government-granted profits could vaccinate the entire world, but they’ve been used to enrich shareholders instead. That’s oligarchy.

What can Americans do about their oligarchy? President Biden’s blueprint is a good place to start. A “dedicated task force to go after the crimes of American oligarchs” is an excellent place to start. It could address questions such as:

1. Why have nine American billionaires acquired more than $755 billion during the Covid pandemic, while so many other people struggled?

2. What role did government and central bank policy play in this enrichment?

3. What unethical or illegal actions, if any, were undertaken in amassing this wealth?

4. What effect will these levels of economic inequality have on social justice, political power, social mobility, and the rights of consumers and workers?

Item #5 would not be unprecedented. It would revive a proposal from President Franklin D. Roosevelt for a “100 percent war supertax” on extremely high incomes and would echo the 94 percent top tax rate passed during World War II. (The top marginal tax rate stayed above 90 percent for the next two decades.)

We certainly face a World War-level emergency. Oxfam observes that “a 99% windfall tax on the Covid-19 wealth gains of the 10 richest men could pay for enough vaccines to vaccinate the entire world and fill financing gaps in climate measures, universal health and social protection, and efforts to address gender-based violence in over 80 countries, while still leaving these men $8bn better off than they were before the pandemic.”

If a “supertax” were levied against America’s oligarchs by the federal government, it would produce as much as $755 billion in revenue. That’s enough to pay for the original, ten-year “Build Back Better” proposal—twice.

To See, and to Act

It’s striking that the current debate about American democracy ignores its biggest antagonist: the oligarchs who have undermined the political process and drained the nation of its wealth. Restraining the oligarchs would help build true democracy. It would be good politics, too.

“We know from polling that (anti-oligarchical) policies and rhetoric like these are wildly popular,” writes Eleanor Eagan of the Revolving Door Project. “In our deeply divided country, anger at elite impunity and a desire to see it end are among the rare uniting forces that we have left.”

Not that we can expect an anti-oligarchical agenda from this government any time soon. Politicians know that America’s oligarchs, unlike Russia’s, have the ability to crush their careers at any time. But the rest of us are free to speak out and demand an end to oligarchical rule anywhere in the world. Our condemnation of other country’s oligarchs will ring hollow until we do.

This work is licensed under Creative Commons (CC BY-NC-ND 3.0). Feel free to republish and share widely. Richard (RJ) Eskow is a freelance writer. Much of his work can be found on eskow.substack.com. He is a senior advisor with Social Security Works.