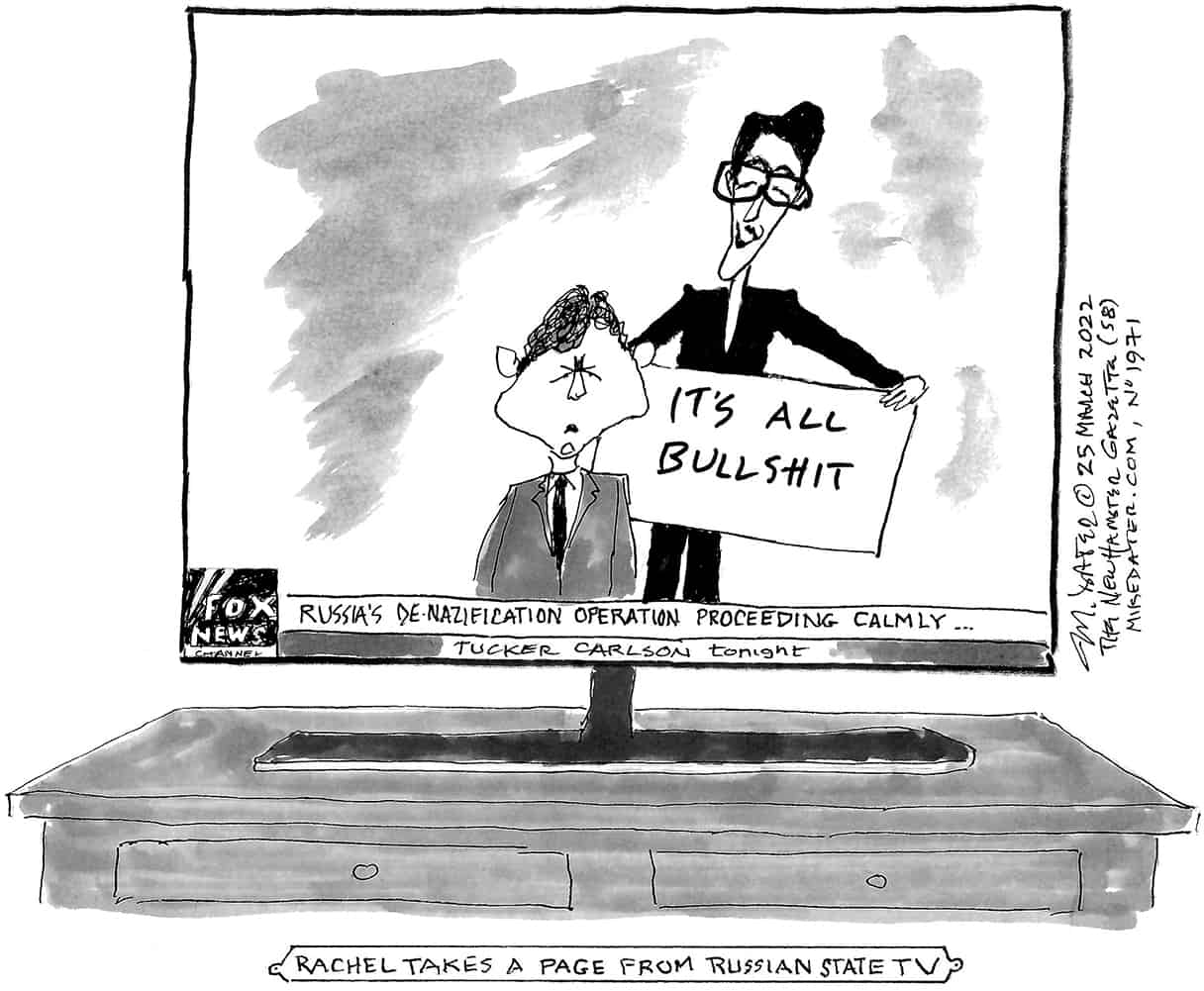 [Muttering in the newsroom: “If only we could think up a clever way to put this…maybe that would make it more palatable. On the other hand, there’s much to be said for brutal honesty. Have to check with Legal, and see if there’s any case law on criminal liability for printing news that’s just too godawful to be read safely….”]

Oh, pardon us, dear reader. We were just trying to decide whether to continue publishing this newspaper, or to don sackcloth and ashes, join a mendicant pilgrimage, and walk barefoot to….

Well, that’s just it, isn’t it? Where the hell do you go when Earth has been used up for profit?

People used to burn candles at both ends. Now the Earth is getting that treatment.

From Our North Pole Bureau

“Using advanced underwater mapping technology, researchers [from the Monterey Bay Aquarium Research Institute] and their collaborators revealed that dramatic changes are happening to the [Arctic] seafloor as a result of thawing permafrost. In some areas, deep sinkholes have formed, some larger than a city block of six-story buildings. In other areas, ice-filled hills called pingos have risen from the seafloor.”

And what might be the implications of this surprising discovery?

“Permafrost contains large amounts of biomass and decomposed biomass that has been stored as methane and carbon dioxide, making tundra soil a carbon sink. As global warming heats the ecosystem and causes soil thawing, the permafrost carbon cycle accelerates and releases much of these soil-contained greenhouse gases into the atmosphere.” — Wikipedia, the hack editor’s best friend.

Surpringly, though, Kanye West’s SUV may not be the cause of these huge divots in the floor of the Beaufort Sea. Scientists are attributing these particular sinkholes and pingos to natural causes.

“While the degradation of terrestrial Arctic permafrost is attributed in part to increases in mean annual temperature from human-driven climate change, the changes the research team has documented on the seafloor associated with submarine permafrost derive from much older, slower climatic shifts related to our emergence from the last ice age. Similar changes appear to have been happening along the seaward edge of the former permafrost for thousands of years.”

So, no problem, right? Uh, no. Drawing on our vast ignorance of the topic, our North Pole Bureau is assuming that:

A) the greenhouse gas released by this phenomenon cannot have been accounted for in present climate models; therefore,

B) as always seems to be the case, the situation is more dire than we thought; and furthermore,

C) if this newly-discovered phenomenon of thawing submarine permafrost is a consequence of the trailing end of the Ice Age, even humanity’s most heroic efforts are unlikely to be able to mitigate it.

There’s also this: that “bomb cyclone” that slammed New England about a fortnight ago kept on trucking right up to the Arctic, bringing with it temperatures that were 50° F above normal. “It’s a highly unusual and extreme bout of circumstances,” according to the Washington Post, “particularly considering the North Pole is still in a nearly six-month period of darkness known as ‘polar night.’ The sun doesn’t fully rise above the horizon between fall and spring equinoxes, contributing to the bone-chilling temperatures customary to the inhospitable region.”

A team of climate scientists from Leipzig told the Post, “We are trying to put together some of the puzzle pieces of the so-called ‘Arctic Amplification’ (stronger warming of the Arctic compared to [mean] global warming). And warm air intrusions are actually one of the candidates to explain this phenomenon.”

From Our South Pole Bureau

What about the other end of Earth—any hope to be found down there?

It’s frustrating. On the one hand, scientists keep learning more and more about how global climate systems work. On the other hand, no one can seem to come up with an effective for us to stop making it worse.

Why is this so hard? Let’s ask Nick Beams:

“As soon as we begin to consider climate change,” Beams wrote 12 years ago, “two things become apparent. The first is that, by its very nature, the problem is global and no national solution is possible. The second is that the productive activity of man, that is the development of economic and social life, cannot be considered outside of mankind’s relationship to nature. Or, to put it another way, there is no separation between the activities of mankind, a part and product of nature, and the rest of nature, upon which mankind depends. Mankind’s productive activity must be carried out, not independent of, but in accordance with, the laws of nature. In considering these questions, however, we run headlong into the very foundations of the global capitalist order.”

Beam’s analysis plausibly explains why, despite clear evidence that the climate is growing increasingly erratic, our political and economic systems are still conducting “business as usual.”

Putting it less abstractly, a relatively small number of billionaires are frog-marching us all into a barren, overheated dystopia.

Beams’s assessment borders on the obvious, but profit-making news media have been inexplicably reluctant to explore this angle. Maybe it’s that Beams used “capitalist” in a negative context, or that he published his work on the World Socialist Web Site [wsws.org].

Rude behavior like that is what prompted The Google to re-set its algorithm some years ago, thereby sending wsws.org to the internet’s digital dungeon. Meanwhile blowhard Senators who complain they’re being “cancelled” get to grill Supreme Court nominees about paranoid nonsense.

Despite all this, something new is happening: scientists are becoming activists, planning a Scientist Rebellion for April 4th–9th. @ScientistRebel1 says on Twitter that hundreds of rebel scientists will be carrying out “direct non-violent actions of civil disobedience in 27 countries across the globe.”

Naturally, with the climate going to hell in a handbasket, an appointee from the Former Guy’s administration, who is holding on with the tenacity of a barnacle despite blatant conflicts of interest, is doing his damnedest to make sure that the USPS spends the next thirty years saddled with a vast fleet of vehicles powered by the very same fossil fuel technology that’s ruining the planet.

“A gas-guzzling fleet is clearly the wrong choice.”

That’s what Congressman Jared Huffman (D-Calif.) said in response to a new report from the U.S. Postal Service Office of Inspector General (OIG) about how transitioning to electric vehicles (EVs) would impact the USPS.

The OIG analysis, released last week, came as Huffman and other Democrats in Congress are challenging Postmaster General Louis DeJoy’s contract with Oshkosh Defense for new mostly gas-powered mail trucks, given climate experts’ warnings about the need to keep fossil fuels in the ground.

“The U.S. Postal Service employs 217,000 delivery vehicles to deliver mail and parcels to more than 135 million addresses. Many of these vehicles are beyond their intended service life and expensive to operate and maintain,” states the report. “The Postal Service is at a critical inflection point for its aging fleet and is preparing to acquire and operate a new generation of delivery vehicles.”

“Our research confirms that electric vehicle technology is generally capable of meeting the Postal Service’s needs,” the analysis adds, pointing out that of the roughly 177,000 USPS routes nationwide, only “around 2,600 of these routes (1.5% of the total) may be poorly suited to electric vehicle deployment.”

Most of the routes that are not well-suited for an EV are longer than the vehicle’s 70-mile range, though the paper notes that some shorter routes “may also experience range limitations if they include hilly terrain, since acceleration up steep slopes can reduce the range of a fully charged battery.”

The document also emphasizes that despite the higher upfront cost of buying new EVs and installing charging infrastructure, “the adoption of electric delivery vehicles could save the Postal Service money in the long term,” particularly for longer routes that are up to 70 miles, because the USPS would save on rapidly rising gas costs.

Postal management took significant issue with the IG’s analysis, calling for corrections and further clarifications. It estimated, for example, that each charger would cost $18,000, whereas the IG said it would only be $7,300. The IG failed to consider the need for operational flexibility when suggesting the vehicles did not always need to stay fully charged, as well as the impact of postal-specific driving on a vehicle’s drivetrain. The IG stuck by its analysis, saying no changes were necessary.

The outlet also noted that “postal management said it could fully electrify its fleet with an injection of $6.9 billion: $3 billion for the higher vehicle cost and $3.9 billion for the chargers. If such funding were provided, the IG said the lifetime cost of EVs would be 11% lower than gas vehicles. It added that USPS may be eligible for local incentives as well.”

Though Congress recently passed a Postal Service reform bill, the bipartisan legislation did not include funding for EVs—and the House-approved Build Back Better package, which could provide billions of dollars for the USPS, remains stalled in the evenly split Senate.

Earlier this month, Congressman Gerry Connolly (D-Va.) introduced the Green Postal Service Fleet Act, which has been referred to the House Committee on Oversight and Reform. The bill would block the embattled postmaster general’s contract by requiring that at least 75% of new USPS vehicles are electric or otherwise emissions-free.

When he unveiled the proposal, Connolly called the contested USPS contract a “flagrant contradiction” to President Joe Biden’s goal of a fully electric federal fleet as well as “a devastating blow to our climate, to our effort to lead the world in green technology, and to our beloved Postal Service.”

Last week, Connolly and Huffman joined Democratic Reps. Brenda Lawrence (Mich.), Stephen Lynch (Mass.), and Carolyn Maloney (N.Y.), chair of the oversight panel, in calling for an OIG probe of the contract. Upon releasing the new report, the watchdog said that it “will be doing additional work in response to that request.”

With March 29th approaching, we naturally aimed our MilSpec browser at www.vietnamwar50th.com, to see how a grateful nation is celebrating that dwindling cohort of national heroes who prevented a bunch of pajama-clad, sandal-wearing rice farmers from beaching their sampans on San Diego’s pristine Coronado Beach and marching inexorably eastward.

“The 5th anniversary of National Vietnam War Veterans Day (NVWVD) is less than two weeks away!,” the site breathlessly announced. “We stand amazed at the remarkable number of upcoming events and recognitions—more than 900—planned across the country and abroad to thank and honor our Nation’s Vietnam veterans and their families! Some wonderful opportunities to participate are outlined below….”

Military.com puts the glorious day in perspective: “Americans celebrate Vietnam Veterans Day annually on March 29 thanks to a measure signed into law by then-President Donald Trump in 2017.” As the honorably-discharged bearer of a DD 214 documenting his participation in the event in question, the editor can assure our readers that nothing could possibly be more appropriate than for this commemoration to have been codified into law by a dubiously-draft-exempted, multiply bankrupted, twice-impeached leader of a failed self-coup.

First Republicans in the State House launched us into the Second Congressional District. Now the Governor is proposing to throw us back into the First district.

Can this be? Ye Olde Rag, rooting for the Guv?