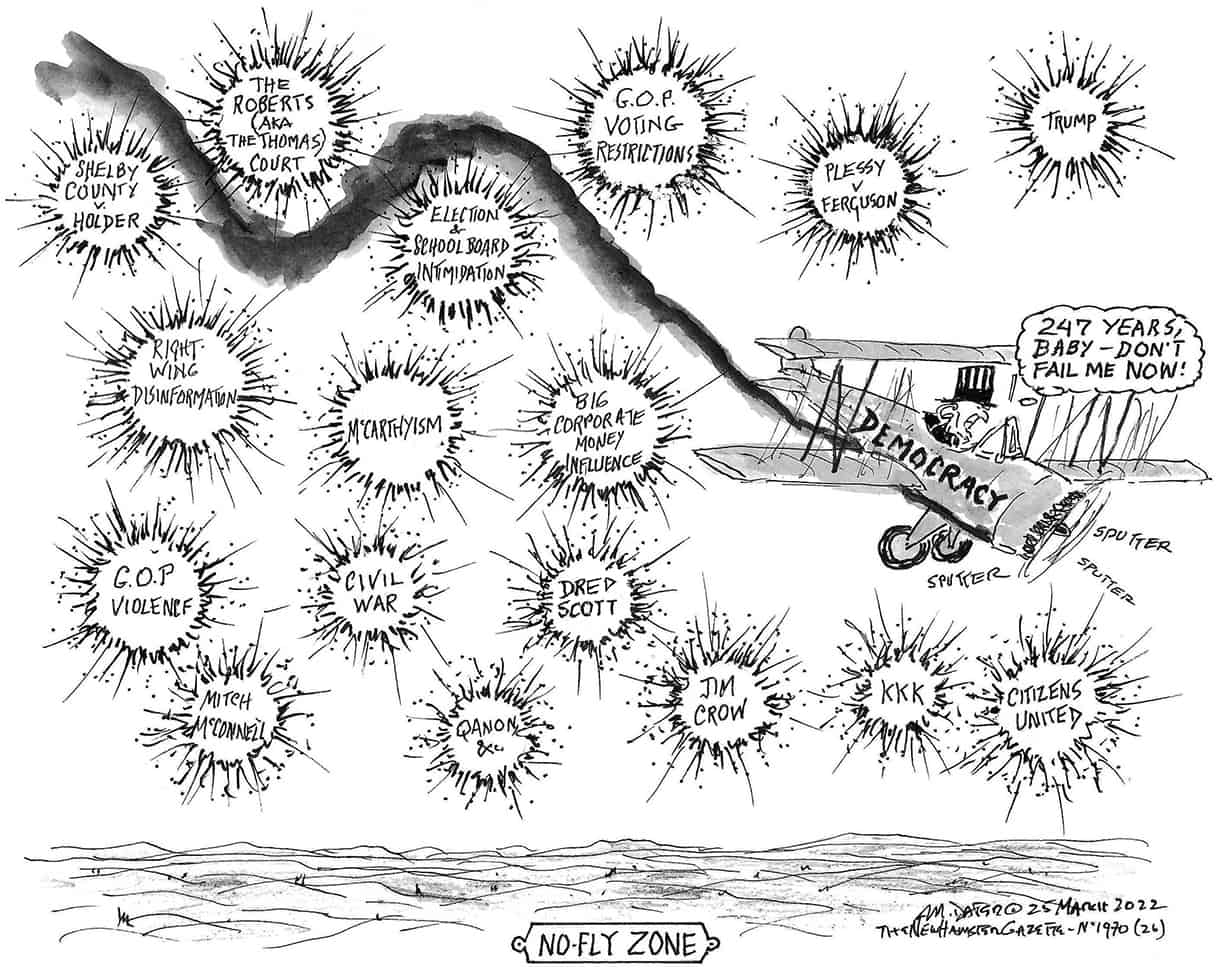 Brethren and sisteren, &c., we take our text today from Twitter, the Book of @KateAronoff, Chapter 3/15:

“one sign of a thriving democracy is that a coal baron elected by less than 300,000 people gets to take a sledgehammer to everything.”

We are shocked—shocked—our own selves to see these disparaging words on the screen before us. They appear, it would seem, of their own volition, in spite of our intention to inscribe on these pages only the most wholesome advises and dispatches, suitable for all readers. We can only have been possessed—possessed by the Printer’s Devil.*

With 265 years of tradition driving us, though, go forward we must—albeit in great trepidation as to what we may inscribe.

Compounding the threat to this congregation’s faith in our sacred Constitution is a bitter truth: Joe Manchin, the miscreant in question, is not even a member of the Party now marching under the banner of sedition!

If would be easy to fall into error regarding the gentleman’s political affiliation because he doesn’t work for his money, he has money that works for him. His ownership of a coal brokerage pays him as much for lounging on the back of his yacht as 33 West Virginians make working for minimum wage.

In the spirit of forbearance, though, before condemning this piece of grit jamming Democracy’s Gearbox, fairness requires that we consider his background, in hopes of discerning what drives him to embody the mission of William F. Buckley’s National Review: standing athwart history, yelling “Stop.”

When Joe Manchin was but a babe in swaddling clothes, his uncle A. James Manchin—said to be “colorful” and “controversial”—was elected to West Virginia’s House of Delegates at the age of 21. Joe was a teenager when the young, Catholic President John Fitzgerald Kennedy appointed the young, Catholic A. James Manchin to be the State Director of the Farmers Home Administration. The reasons for that appointment have no doubt been lost to history but could conceivably have had something to do with Kennedy’s win over Humphrey in the state’s 1960 Democratic Presidential Primary.

After a term as Secretary of State, A. James became Treasurer in 1985. Presumably this was when he earned the adjectives cited above because somehow or other, during a three-month period in 1987, the State of West Virginia managed to lose $279 million. Manchin was then impeached for maladministration, incompetency, neglect of duty, and high crimes and misdemeanors.

Manchin, a Democrat, denied any wrongdoing. He said, according to the Fredericksburg, Va. Free Lance-Star, that he “knew nothing about finances and hired subordinates to do the work.” He vowed to stay in office, then reneged; by resigning before a trial, he protected his pension and preserved his right to run for future office. Sure enough, in 1998 he was elected to the House of Delegates, where his colorful and controversial career had begun, half a century earlier.

On his death in 2003, Manchin’s son Tim inherited was appointed to fill his father’s seat.

The uncle’s peccadilloes may not directly align with the nephew’s political perversities. The two men do seem, however, to share a certain disdain for the point of public service.

Lately it seems like Maserati-driving Joe Manchin has been playing the Whack-a-Mole, popping up his head every time a useful piece of legislation appears on the brink of passage.

Is the problem really just Joe, though? To believe that would be to imply that West Virginia could solve the nation’s problems just by giving this guy the boot. That seems much too simple.

Besides, we can think of several other members of the World’s Most Self-Regarding Deliberative Body who would probably walk over their grandmothers to take his place before the cameras.

Arriving at that conclusion suggests that Elie Mystal may be right. Mystal is an attorney, justice correspondent for The Nation, and an author. His Allow Me to Retort: A Black Guy’s Guide to the Constitution, is currently on the New York Times’s Best Seller list. The title, derived from a line spoken by Samuel L. Jackson in the movie “Pulp Fiction,” accurately reflects the book’s take-no-prisoners approach.

According to RealClearPolitics, here’s what Mystal said about the Constitution on ABC’s “The View”:

“And I say, if that is the starting point, the very least we can do is ignore what those slavers and colonists and misogynists thought, and interpret the Constitution in a way that makes sense for our modern world.”

With one political party openly embracing armed sedition, the other undermined by a one-man Fifth Column—while Earth’s polar caps experience simultaneous heat waves—a clear-eyed reassessment of the nation’s operating system would seem to be in order. If that makes some folks squirm in their pews, perhaps they’ve been too comfortable for too long.

Mystal just Tweeted that he hopes Justice Thomas recovers because he wants change “through reform not death and also I don’t want to spend the next six months watching Joe Manchin stab the entire country in the back repeatedly.”

* Printer’s Devil: Printing was originally associated with black magic because of the marvelous uniformity of printed works as compared with handwritten manuscripts. Printers cherished their air of mystery and dubbed their young helpers evil spirits, or “devils.” Also, some European apprentices were considered permanent menial laborers and so received a disreputable name. In America the term lost its connotation of magic, but the chore boy or youngest apprentice was still called the printer’s devil. Educated in setting type and working the handpress, these workers sometimes became master printers, publishers, or writers. With the mechanization of printing, apprenticeship declined, and the printer’s devil became obsolete. [Though not in this shop. – The Ed.] – Encyclopedia.com