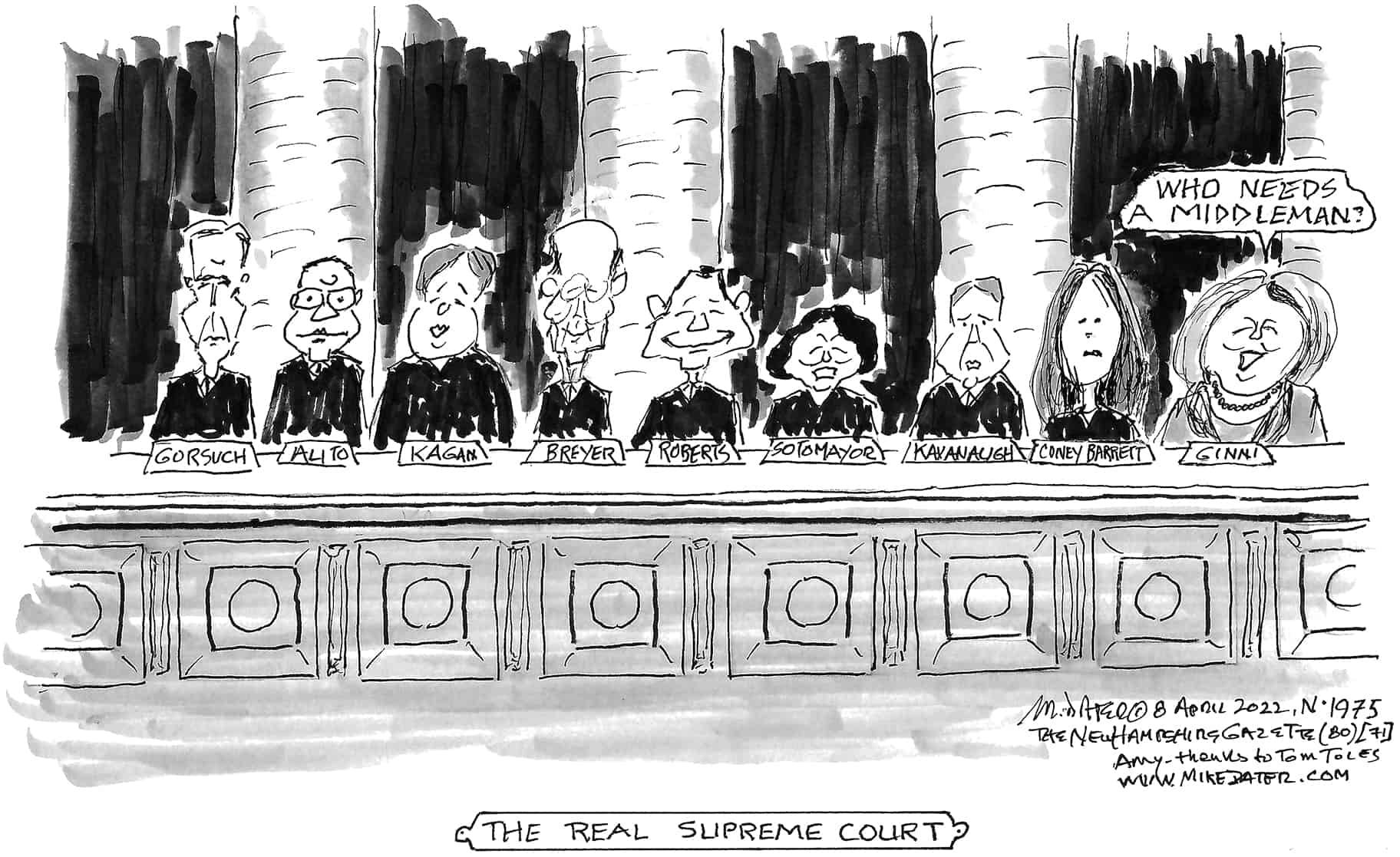 This will sound crazy but the day may come when we’re grateful that Ginni Thomas was once the spouse of a Supreme Court Justice.

That feeling of gratitude would be contingent, of course, on certain further developments.

First, there would have to be an appropriate public response to the bizarre recent revelations about the Thomases. At a bare minimum these would include Congressional hearings, with all their officious folderol, preferably expedited, and culminating in the resignation of Justice Clarence Thomas. Ideally, this action would be followed by an appropriate form of chastisement for having trod upon his ethical obligations.

If we seem premature in this judgment, we would remind the reader that this is a newspaper, not a court of law. We deal in the preponderance of evidence—and man, there is a ton of that.

A decade ago the nation learned that the Heritage Foundation—a top-tier Right Wing propaganda mill—had paid Ginni Thomas substantial sums over a five year period. When her husband Clarence filled out his financial disclosure forms, he “forgot” to list that $680,000. Since the Court, due to the exalted status it arrogates to itself, is allowed to police itself, nothing was ever done about that sketchy omission.

Like many D.C. wives, Ginni Thomas started a little business to keep herself busy while her hubby was off Justicing. Her shop, Liberty Consulting, touted the personal “experience and connections” she could place at the disposal of her clients, whom she advised on “governmental affairs” and political donations. Here again, the nation could only rely on the honor of Justice Thomas, to recuse himself from any cases which might involve Ginni’s clients—whomever they might be. Once again, viewed from the right perspective—which is to say, the Right perspective—there’s nothing to see here, no smoking gun.

On January 6th, though, there was that little matter of the noose and the gallows; a fatal tableau erected to impress upon the Vice President what the consequences would be if he failed to do the Right thing, i.e., throw out the votes of 81 million people and install a deranged and corrupt incompetent in the White House.

Amid all the commotion of that day, it was easy to overlook Mrs. Thomas. The more people have dug, though, the more they have found. It’s now pretty clear that former Lifespring cult member Ginni Thomas and President Trump were in the habit of doing the Vulcan mind meld.

Not that there’s anything wrong with that…. Except, yeah, there is, if they’re conspiring to overthrow an election. That’s still a no-no. But what, you may ask, does this have to do with Justice Thomas?

On January 19th of this year, Thomas was the only Justice to vote in favor of Donald Trump’s request to block Congressional investigators from gaining access to messages involving the attempt to overthrow the government—a treasonous action in which his wife Ginni had apparently taken some part.

So, yeah, on that count alone, he’s gotta go. Or, we could quit pretending we’re a nation of laws. Either one. Hey—we could let the people decide! How cool would that be?

Ginni getting Clarence bounced off the bench would be the best thing she ever did. All the more so because—if some way could be found to get around Moscow Mitch McConnell’s patented pocket veto—his departure would provide an opening for a replacement.

Since we’ve clearly strayed into Dreamland here—these days one can only take so much of the real world—we might as well stump for an ideological opposite.

Thanks to Judge Ketanji Brown Jackson, the public can now imagine a Justice with prior experience as a public defender. That’s a reasonable baseline. To truly begin the herculean task of shifting the Court into a position where it might begin to fairly render justice to all, though, would require moving the goal post.

How about a young, female, Native American version of Ralph Nader? Or Stacy Abrams, just as she is? Does she have a law degree? You know what? We don’t care. Put her up there.

Republicans in the Senate love to howl about Democrats wanting to put radical leftists on the Court. It’s time someone gave them something to howl about.

“But, but…no one an inch to the left of dead center could ever be confirmed,” Dick Durbin would sputter. He has a point there. No one knows better than the leaders of our threadbare Democratic Party just exactly what cannot be done. They’ve been studying the matter for decades.

Perhaps we’d have to settle for replacing loathsome, rotten deadwood with someone who is just not crazy and dishonest. So be it. If we can’t go as far as we’d like, we’d settle for going in the right direction for a change. It might lighten the nation’s mood. God knows we need it.

While we’re thinking happy thoughts, let’s imagine that this Ginni affair has ripped the lid off the toxic can of mutant worms that is our U.S. Supreme Court. Her husband has retired. The balance of power has gone from a slam-dunk 6/3 in favor of corporations and the Federalist Society, to a considerably less dire 5/4.

Democrats would no doubt find it hard to adopt entirely foreign manner of thinking, but what if they then pressed their advantage? With the balance of power shifted one notch in favor of the people, why not push for a 5/4 majority?

They could start with a certain whiny, superannuated, beer-loving frat-boy on the bench whose ethics are overdue for review. After Christine Blasey-Ford made her allegations against Brett Kavanaugh, an FBI tip line took 4,500 calls. Of that number, the Bureau investigated ten. It then deep-sixed any “relevant” information in Trump White House. Another slightly more rigorous look at those calls might uncover evidence proving that shouting, red-faced Brett Kavanaugh barked a few falsehoods under oath. Worth a try.

Just about anything would be worth trying if it could produce a Court that put the people first.