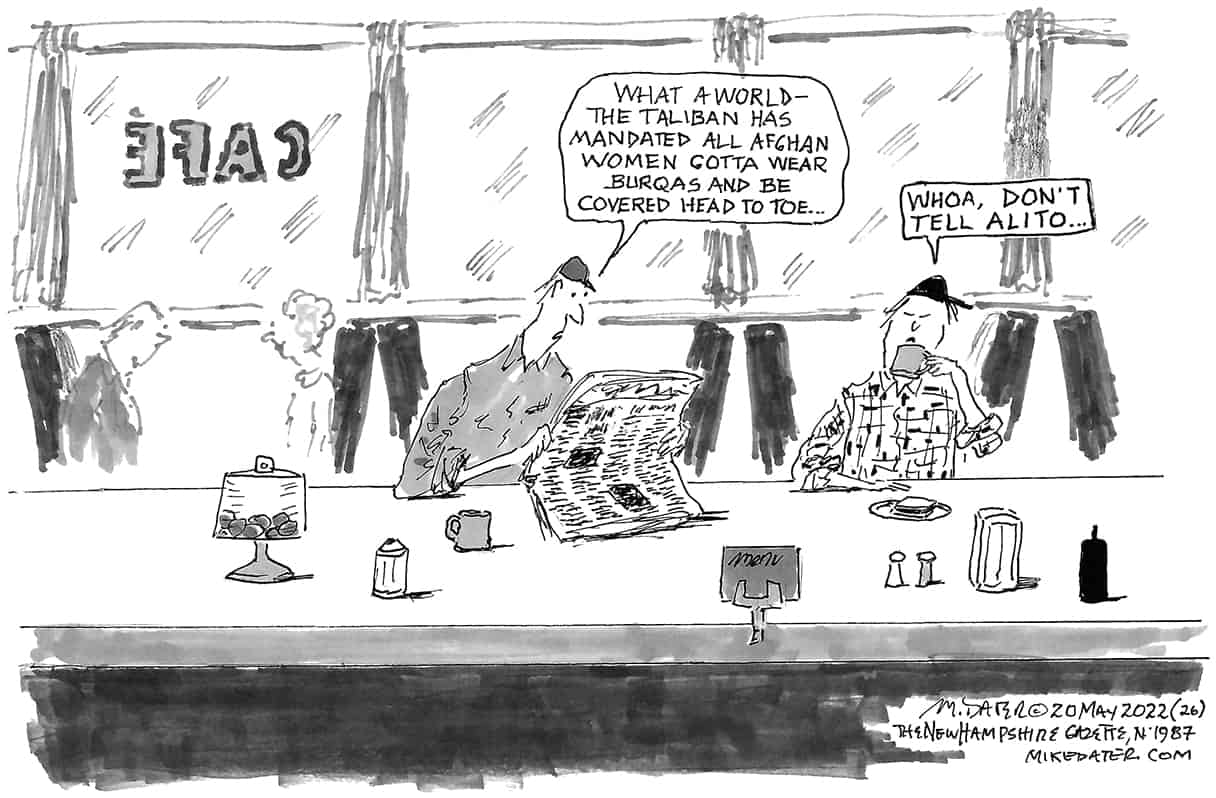 Superior Court Judge Andrew Schulman sentenced four climate activists on Friday, May 13th. The four had held up a train in Bow in December, 2019.

To be clear, there were no horses or six-shooters involved; no looting of passengers took place. The four guilty parties just stood on the tracks and, by doing so, delayed the arrival by four and a half hours of a trainload of coal at the Merrimack Generating Station.

Once it arrived, the coal was burned, generating electrical power in the process. That power was sold, generating a profit which, we presume, was distributed to shareholders—a very small fraction of the public at large.

Though stingy and elitist with its profits, the Bow power plant is generous and egalitarian in other ways. It bestows carbon dioxide, mercury, and god knows what else on anyone and everyone in its general vicinity. Even those far away are affected: Every ton of CO2 it releases has an incremental effect on the global climate.

Judge Schulman’s rulings during the trial effectively blinded the jury. He allowed the railroads to pose as neutral victims. They were anything but.

In a statement at his sentencing, defendant Jonathan O’Hara made clear who the real criminals are.

“The jury has spoken. They have decided that I was trespassing in December 2019. That is the law. What remains for you to decide now is the matter of justice. The question before you now is whether I was acting in good conscience to intervene in a situation of injustice on behalf of my community, the community of Bow, the ratepayers of New England, and indeed the community of all life on earth to prevent the further burning of coal at the Merrimack Generating Station. Or whether the injustice perpetrated in December 2019 was that the private property and profit rights of the aggrieved railroad were harmed by the trespassing and delay of their train for four and a half hours that day.

“In order for you to make that decision I want to give some additional context that I was not able to give during the trial. The prosecution at trial entered into evidence and made the argument in closing that the railroad has a statutory obligation to be a neutral carrier of whatever goods it is asked to carry. On the surface that is certainly true. But if you look under the hood there’s a different story, in fact it’s a representative story of exactly how adequate progress addressing the climate crisis has been thwarted over the past three decades.

“The coal cars carried that day in December, while they were pulled and operated by Pan Am over the tracks in New Hampshire, were owned by and sent here from the mine by the railroad CSX. All of the cars on that train were labeled with the company’s logo. In 2019 CSX earned $2.1 billion dollars in coal revenue. Starting in the 1990s, when the international community, including the United States, began to take action on climate change, CSX began to, along with the three other largest railroads in the U.S., fund organizations whose intention was to stop climate action. As reported in The Atlantic, CSX and these other railroads spent tens of millions of dollars on this effort, to ensure that they can continue to make billions of dollars shipping coal in the future, while the rest of us suffer. A railroad supported coalition spent $13 million dollars in 1997 alone—the year I was a sophomore in High School—to dissuade the U.S. from supporting the international Kyoto Protocol climate treaty. That effort was successful in getting the U.S. to withdraw from that treaty. This is just the beginning of a pattern of disinformation and obfuscation of the truth funded by CSX that continued through the 2000s, effectively stopping action on climate change.

“So in fact, the railroads are not neutral carriers. They have spent tens of millions of dollars to confuse and outright deny the legitimacy of international scientific reports on climate change, and to shape the regulatory environment in ways that protect their bottom line, thwarting efforts to protect the health and security of the public. And now CSX has gained regulatory approval to purchase Pan Am railways, for a reported $700 million dollars. All of this contrasts with what the prosecution teased out skillfully during trial: that I am part of a small little non-profit organization with a budget of around $90,000 trying to do something constructive.”

O’Hara refers to No Coal No Gas, online at nocoalnogas.org. In a statement, the organization noted that while Judge Schulman allowed the defendants to speak, he had arrived in court with his decision made and written out in detail.

Dana Dwinell-Yardley and Daniel Flynn got four months in the county jail, no credit for time served, suspended for 3 years with good behavior.

Johnny Sanchez and Jonathan O’Hara got six months in the county jail, no credit for time served, all suspended for 5 years with good behavior.

Restitution to the PanAm Railways was set at $6,215. Schulman ordered O’Hara and Sanchez to pay a larger portion of the restitution based on his perception of leadership in the action and for keeping the train stopped for longer, respectively.

Fines from the state were also imposed, totaling $5,580.

“Good behavior” was defined as: No felony, misdemeanor, or major traffic violations; no collaboration, colluding, or soliciting of others to engage in acts resulting in felony, misdemeanor, or other “crimes;” and staying 100 feet away from the Merrimack Station. The restrictions apply to all jurisdictions, not only conduct in New Hampshire.

For those keeping score at home, that’s 16 person/years of life without the protection of the First Amendment.

A global index published Tuesday ranks the United States as the world’s leading perpetrator of financial secrecy, citing the country’s refusal to share key information with the tax authorities of other nations and its status as a generous tax haven for foreign oligarchs, rich executives, and other elites.

The ranking comes despite U.S. President Joe Biden’s campaign-trail pledge to “bring transparency to the global financial system, go after illicit tax havens, seize stolen assets, and make it more difficult for leaders who steal from their people to hide behind anonymous front companies.”

In December, following the leak of an enormous trove of tax documents that called additional attention to the country’s secretive financial system, Treasury Secretary Janet Yellen conceded, “There’s a good argument that, right now, the best place to hide and launder ill-gotten gains is actually the United States.”

The latest edition of the Financial Secrecy Index, a project of the Tax Justice Network (TJN), echoes that assessment, faulting the U.S. for its weak corporate tax disclosure rules and overall lack of transparency. In fact, the index awarded the U.S. the highest secrecy score since 2009, when the ranking began.

“That isn’t a prize the U.S. wants to claim for itself,” Gary Kalman, the executive director of Transparency International U.S., said in a statement. “The combination of secrecy and size of our financial system puts the U.S. ahead of other notorious secrecy havens like the Cayman Islands and Switzerland. That’s a shameful distinction.”

While noting that some progress has been made over the past year and a half—specifically Congress’ passage of a ban on anonymous shell companies, entities often used to hide illicit cash—TJN found that “the U.S. now fuels more global financial secrecy than Switzerland, Cayman, and Bermuda combined.”

TJN also stressed that the shell company law enacted in January 2021 is riddled with loopholes such as “limited definitions of which legal entities and beneficial owners must register, 23 baked-in exemptions to registration, and an absence of requirements on all trusts.”

To improve on its dismal ranking, TJN urged the U.S. to “reciprocally exchange information with other countries by adopting the Common Reporting Standard and become a party to amended Convention on Mutual Administrative Assistance in Tax Matters,” steps that “would cut its supply of financial secrecy to the world by 40 percent.”

The U.S.-based Financial Accountability and Corporate Transparency (FACT) Coalition also outlined a number of actions the Biden administration and Congress should take, including “introducing consistent anti-money laundering due diligence and reporting requirements to the $11 trillion U.S. private investment fund industry.”

“While the U.S. has committed to being a leader in cracking down on global corruption, these rankings show how corrupt actors are weaponizing our financial system against democracy here and abroad,” said Ian Gary, the FACT Coalition’s executive director.

The updated index comes a day before G7 finance ministers are set to meet in Bonn, Germany to discuss aid to Ukraine and enforcement of the unprecedented Western sanctions targeting Russian oligarchs, political leaders, and the broader economy.

TJN argued Tuesday that despite “subversion” by G7 countries, global financial secrecy has continued to shrink overall thanks to “more countries adopting or improving beneficial ownership registration laws—which require the identification and registration of the real individual, made of flesh and blood, who ultimately owns, controls, or benefits from a company or legal vehicle—and by more countries, particularly lower-income countries, improving international cooperation on anti-money laundering efforts, information exchange, treaties, and judicial cooperation.”

Alex Cobham, TJN’s chief executive, said in a statement that “globally, we’re starting to curb the financial secrecy used by Russian oligarchs, and also by tax evaders, corrupt politicians, and organized crime around the world to hide and launder ill-gotten wealth.”

“But the U.S., U.K., Germany, Italy, and Japan cut back that global progress by more than half, fueling financial secrecy instead of fighting it,” Cobham continued. “The G7 must make clear where they stand in the fight against financial secrecy by committing to a global asset register.”

TJN researcher Moran Harari added that “once again, a small club of rich countries setting global rules on finance and tax are found to be the ones most responsible for facilitating financial secrecy and tax abuses.”

“For decades, rich G7 countries courted billionaires, oligarchs, and corporate giants with secrecy loopholes and eyes-wide-shut-regulations,” said Harari. “The regulations they imposed facilitated the robbing of billions from poorer countries’ public purses. And now those same regulations are making it nearly impossible for G7 countries themselves to track down the billions held offshore by sanctioned Russian oligarchs.”

Capitalism At Work For You

Imagine for a moment that the U.S.A. was run like North Korea. Every morning in grade school, children would recite the following:

Here in the U.S.A., of course, we don’t recite such catechisms. Our dogma is so pervasive we simply absorb it through osmosis.

“As hundreds of meatpacking workers fell sick from the coronavirus that was spreading through their plants and into their communities in April 2020,” two-time Pulitzer finalist Michael Grabell writes, “the CEO of Tyson Foods reached out to the head of another major meatpacker, Smithfield Foods, with a proposal.

“Smithfield’s pork plant in Sioux Falls, South Dakota, had been hit particularly hard, and state and local officials were pressuring the company to shut it down.

“‘Anything we can do to help?’ Tyson CEO Noel White asked in an email.”

Turns out there was. Tyson lawyers drafted a regulation that suited the companies’ needs. The two “competitors” then collaborated with a compliant Trump administration. Then everyone lived happily ever after. Well, not exactly. The meat packing plants continued to make a profit, but a lot of their workers got sick and died: “by October 2020, community spread from the plants had generated 334,000 illnesses and 18,000 Covid-19-related deaths.”