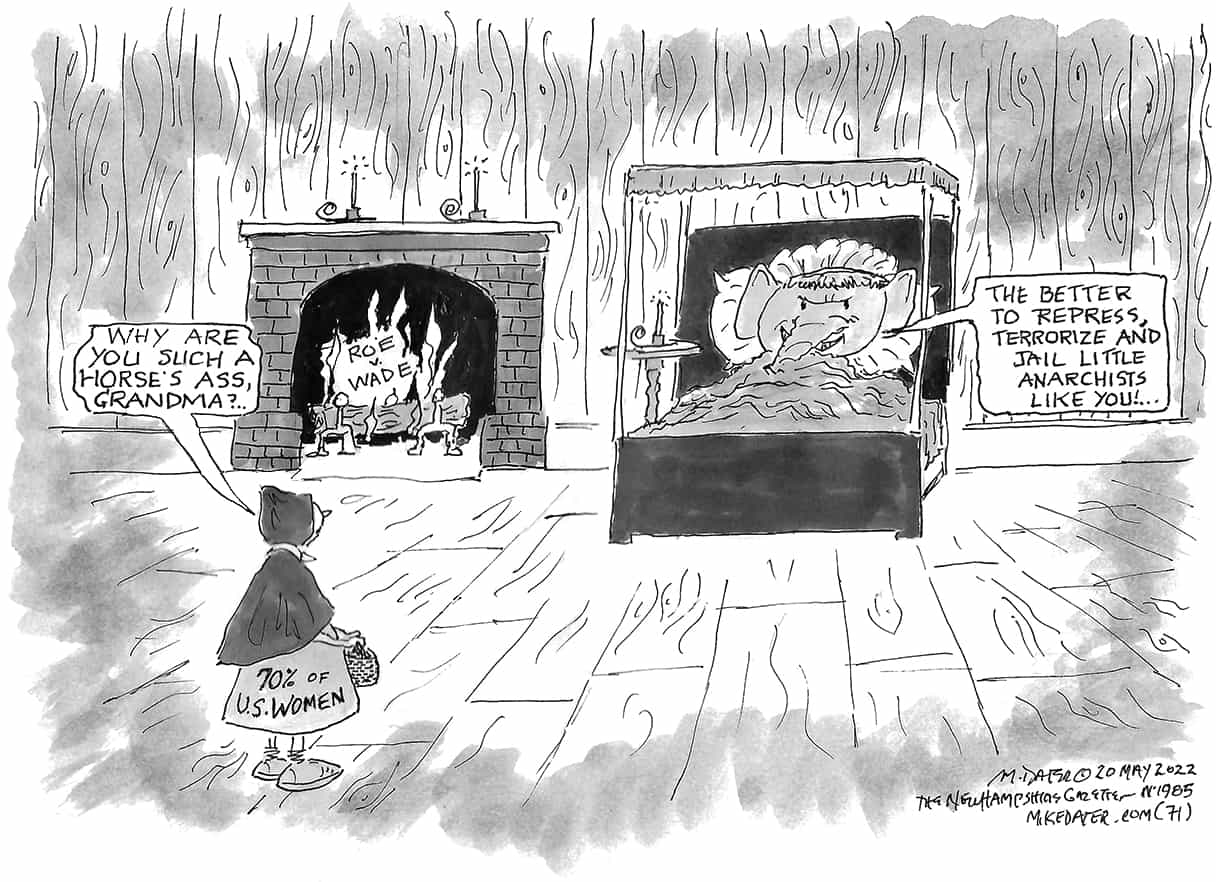 Memorial Day is coming pretty soon. It will be here in ten or eleven days, depending on whether you count the day itself. That’s a point one could argue either way.

If we have learned anything since a Black man was elected President, it’s that people can argue about anything, and come to blows over nothing.

Our seniority obliges us to keep posterity in mind when we write the news. We must imagine that some part of our readership is as yet unborn. That part comes easily enough; one might even say we were born for this.*

It’s getting more and more difficult, though, to see how we’ll ever get through these twin pandemics.

One, of course, is Covid, and it’s bad enough. The virus has killed more than a million of us already. The other is the toxic array of beliefs which claims, among other things, that Covid is a hoax. Three of every ten of the dead, researchers say, would probably still be with us if they had just taken the vaccine which was, by then, available to them. But no, for them, the vaccine was just part of the hoax—the deadliest hoax in U.S. history.

Calling this paroxysm of bizarre behavior “crazy” would be too easy, and that term is too loaded. It stigmatizes unfortunate people experiencing something unpleasant that is beyond their control. We should all be able to relate to that.

What handy label, then, shall we use to sum up the zeitgeist? So many people reaching for their guns we can only call it “The Culture War.”

For the benefit, then, of our readers off in that distant future which may or may not ever come to exist, how shall we memorialize this Culture War, this latest stage in the U.S.A.’s never-ending effort to keep on getting stranger?

We cannot, of course, keep track of every instance of rampant lunacy that comes to our attention. We’d have to put out a paper twice this size, every fifteen minutes. In this blizzard of BS, we can’t even narrow down our selections. What criteria could we choose? Most psychotic? Most gratuitously cruel? Least self-aware? Let’s just grab a few anecdotes at random and see if a pattern develops.

According to a self-produced puff piece available online, “Paul Marik, MD recently testified before the New Hampshire legislature to support access to needed medications and to protect the doctor-patient relationship.” The medication under discussion was ivermectin, the MAGA mob’s favorite horse-dewormer.

Marik, according to our old friend Wikipedia, has authored a paper on Covid treatments which was later retracted due to “a series of strong, unsupported claims based on studies with insufficient statistical significance.” Another paper of his was rejected for misreporting mortality figures.

Barring a veto, Granite Staters may soon join Tennesseans in signifying their fealty to Dolt #45 by consuming horse paste at their own discretion.

Perhaps the General Court will now follow Tennessee’s lead and designate an Official State Firearm. Theirs is the Barrett Light .50 caliber semi-automatic sniper rifle. Ours could well be the Newington-made Sig Sauer P320, subject of myriad accidental-discharge lawsuits.

So far, so disheartening. Let’s visit a particularly sunny laboratory of democracy and see if that will brighten the mood.

Ron DeSantis, the Governor of Florida, just appointed Cord Byrd to be the new Secretary of State. Not long ago, DeSantis appointed Esther Byrd, Cord’s wife, to Florida’s Board of Education. Clearly DeSantis is for the Byrds, who are, among other things, boating enthusiasts. When they participated in a MAGA boat parade, their vessel flew a QAnon flag. Do they truly believe that Democrats consume adrenochrome harvested from children? Perhaps. Or perhaps they’re just kidding.

Byrd will now oversee statewide elections, with help from the new $3.7 million election police force DeSantis conjured up earlier this year. And you thought Katherine Harris was a threat to democracy when she held the office in 2000.

The Republic will almost surely survive through at least this pending Memorial Day. Hell, the editor delivered Portsmouth’s Memorial Day address in 2016, and nothing terrible happened, did it? Oh, wait….

Moving right along, let’s get to the point if we have one. When, if ever, will the U.S.A. be able to observe Culture War Memorial Day?

Despite all this, we’re going to make a surprising prediction: we’ll be commemorating the end of The Culture War no later than the second Tuesday of next week.

* The editor has been around for a good while now. His father Robert’s first breath came just seven years after the Wright Flyer took to the air. “R.B.” was raised by Georgie Ann Fowle, who was seven years old when the South fired on Fort Sumter. She told him old family stories. One was about some relatives who had to leave town in a wagon because the British were burning Washington, D.C. Here’s another: “There was a printer in the family, way back in the olden days. He printed something the authorities didn’t like, so they threw him in jail.” Terse—just 26 words, one for each letter of the alphabet. Enough to lead, though, to the liberation of this newspaper.