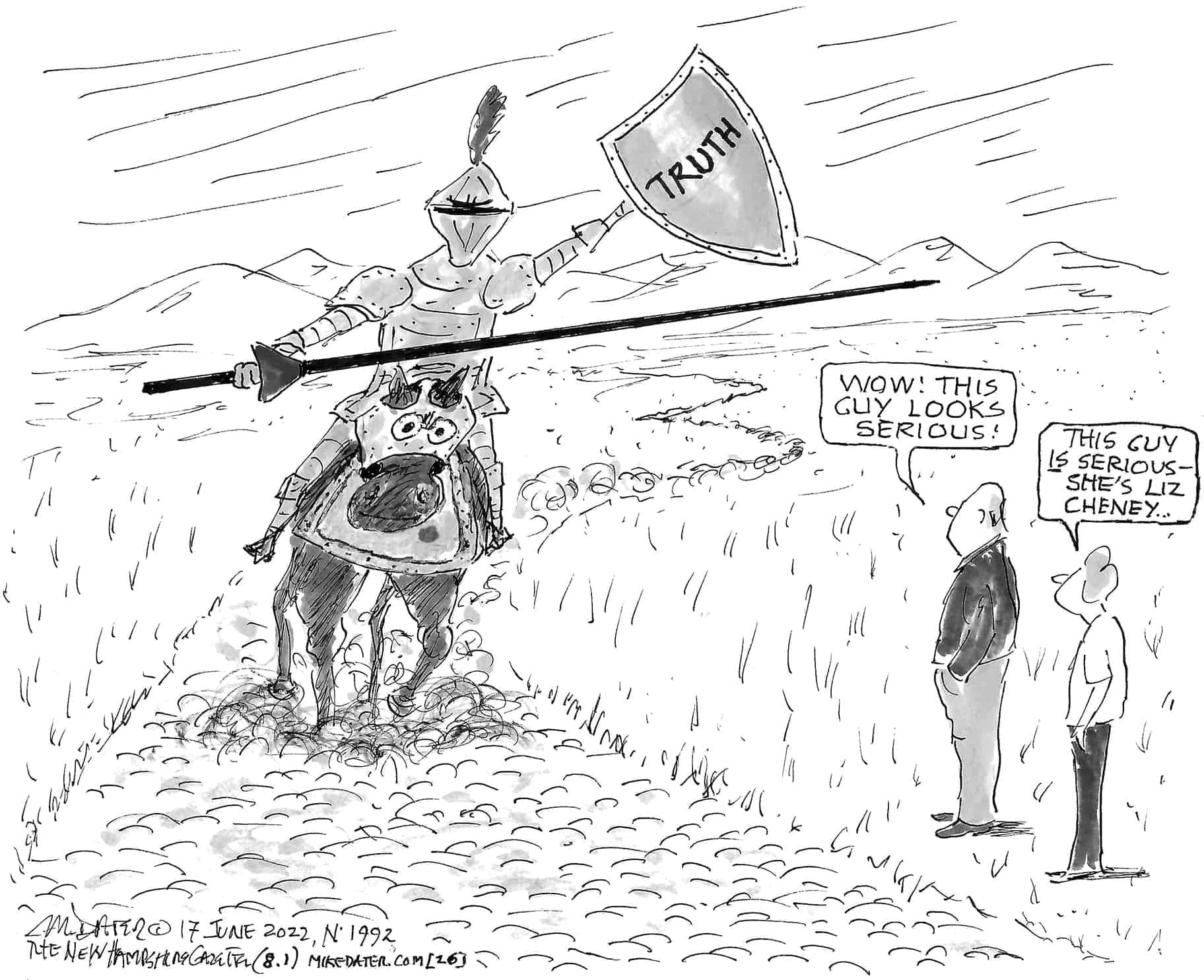 Just a few days into the January 6th hearings, one thing already seems clear: the Former Guy is guilty of everything we watched him do on live television. Under the circumstances it would be incomprehensible if he were to somehow evade justice yet again.

On the other hand, this is the United States of America. What is our history if not the record of us repeatedly machine-gunning ourselves in the feet?

Hell, never mind history. Consider this single aspect of the present: Liz Cheney has become the Ranking Apostate of the Republican Party, due to her work on the House Select Committee investigating the attack on Capitol. Under the “enemy of my enemy principle,” 42 percent of Democrats have a favorable view of her, despite the fact that she has voted with Trump 93 percent of the time.

After the Big Loser lost the 2020 election, he and his Band of Boodlers did as all the self-help gurus advise, Monty Python included: they looked on the bright side. What they saw was another opportunity to fleece the rubes.

Yes, it was venal and self-serving—but give credit where it’s due. They were upholding an American tradition, one meticulously documented by Rick Perlstein in the 2,484 pages of his three highly acclaimed histories.*

Fortunately for our narrative purposes, Perlstein succinctly summed it all up in an interview by Greg Sargent in Tuesday’s Washington Post.

“This phenomenon of conservative Republican leaders seeing their constituencies as a pool of marks to squeeze money out of really does go back to the beginnings of the conservative takeover of the Republican Party in the 1960s,” Perlstein said.

“As is so often the case in the Republican Party under the Trumpist reign, it takes normal historical patterns of behavior and turns them up to 11.”

The violence of the Proud Boys was presaged when the Ku Klux Klan murdered three civil rights workers in Mississippi one month before Barry Goldwater’s nomination. Ronald Reagan’s presidential campaign began 16 years later with a speech praising “states rights” at a fairground located just seven miles from the place where the bodies of Schwerner, Goodman, and Chaney were hidden.

When Sargent suggests that “the big lie” is really just “the big grift,” Perlstein says it’s both.

“It’s impossible to understand where the ideological con ends and the money con begins. They work together.”

They have done so for more than 50 years. Brad Parscale, the Trump campaign’s digital guru, was preceeded by Richard Viguerie, the pioneer of hate-filled, scare-mongering direct mail political fundraising.

They didn’t succeed, but Viguerie was inspired nevertheless by the possibilities of the technique. He copied, by longhand, the names of 12,000 donors to the Goldwater campaign. Starting with that core he built his own mailing list. It grew larger and more effective with every election. As it did, right wing candidates began to be able to fund their own campaigns, freeing themselves from the squeamishness and ideological constraints of the Republican National Committee.

Viguerie’s fee structure—he seems to be still at this, at the age of 88—allows for an easy buy-in. He offers a no-loss guarantee. In exchange he takes a healthy cut of up to 50 percent. And he retains all clients’ mailing lists. As with cancer and capitalism, constant growth is the goal.

Having spent their lives within a fundamentally corrupt political culture, it was only natural that all the President’s goombahs went right to work shortly after his 2020 defeat. Claiming that funds were desperately needed to pursue a host of righteous legal cases—filed, apparently, in the previously unknown Court of Mass Delusion—they bombarded the usual victims with as many as 25 pleas in a single day.

The Committee alleges that these flim-flam artists successfully shook down America’s Most Gullible for a whopping quarter of a billion dollars. That’s enough to buy 51,124,744 Big Macs. If Dolt #45 were to shove one down his throat every ten minutes, eating them all would take him 972 years. Of course he could never do it, but we’d love to see him try.

Out of this huge sum, a mere $10 million has been accounted for by the Committee. A small fraction of that—a mere $60,000—went to Don Jr.’s girlfriend, Kimberly Guilfoyle, for yelling at the mob before it stormed the Capitol. Some critics were shocked she was paid so much for a speech that lasted just 86 seconds. Perhaps she was paid by the decibel.

It’s perfectly reasonable to be shocked at the amorality of this machine. As @SusanofTexas reminds us, “Rich people kill you for money.” On Monday the Scientific American reported that lack of universal health care has cost us 330,000 lives from Covid alone. We should not be surprised, though, at its efficiency—it’s been perfecting itself for more than half a century.

We hesitate to end on a downbeat note. On the other hand we’ll never break this cycle by pretending it’s not real. So let’s get optimistic. Note that in the last sentence of this quote from Carl Sagan, he qualifies “never” with an upbeat “almost.”

“One of the saddest lessons of history is this: If we’ve been bamboozled long enough, we tend to reject any evidence of the bamboozle. We’re no longer interested in finding out the truth. The bamboozle has captured us. It’s simply too painful to acknowledge, even to ourselves, that we’ve been taken. Once you give a charlatan power over you, you almost never get it back.”

* Before the Storm: Barry Goldwater and the Unmaking of the American Consensus (2001); Nixonland: The Rise of a President and the Fracturing of America (2008); and The Invisible Bridge: The Fall of Nixon and the Rise of Reagan (2015).