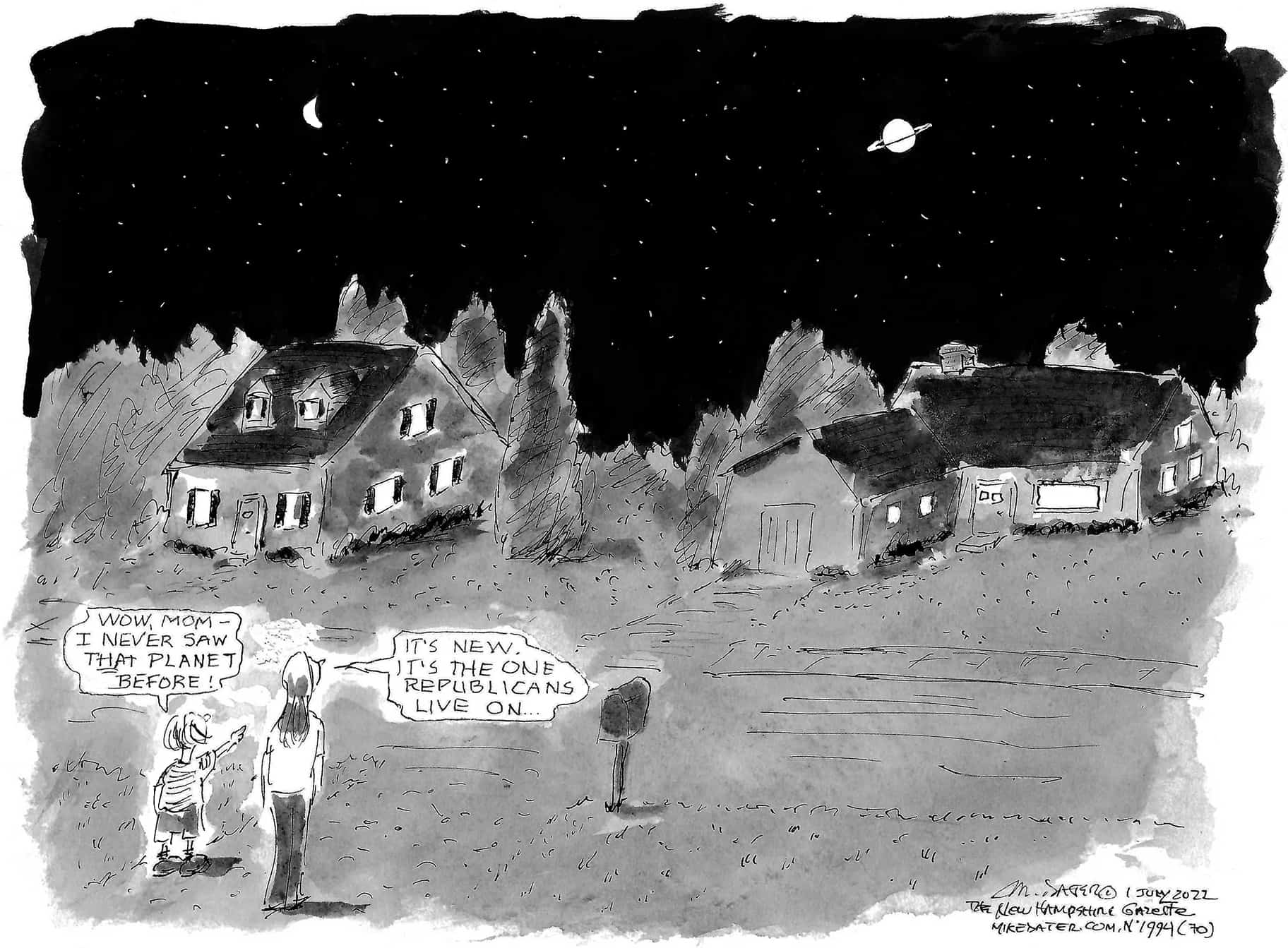 Could a future televised Congressional hearing ever surpass the one held on Tuesday?

Sure. Nothing to it. Just swear in a witness from Alpha Centauri. Or 133 year-old Judge Crater, who mysteriously disappeared 92 years ago. How about Bat Boy, brandishing a birth certificate declaring that Hillary Clinton is his mother?

Short of something on that order, though, Tuesday had to be a high-water mark.

Granted, we had previously known that a sitting President—with one impeachment under his capacious belt already—had denied the legitimate results of the 2020 election, assembled a mob of followers at the Ellipse, and called upon them to march on the Capitol.

It was pretty damned dramatic, though, to hear Cassidy Hutchinson say that the President knew some of those in the mob were armed, and that he wanted them to retain their weapons for the confrontation to come. If that doesn’t warrant a stretch at Leavenworth, what’s a federal penitentiary for?

The most startling scene, though, was the Former Guy reaching out for the steering wheel of the Presidential limo, and then, thwarted, reaching for the throat of a Secret Service agent. That is absolute dystopian Hollywood gold. Lordy, let there be tapes.

It’s a little surprising to think he’d take the risk. On the other hand his grasp of reality was probably too tenuous to comprehend it. As for plates of ketchup-soaked foods being flung at the White House walls, well, who could possibly doubt that?

Several environmental groups sued the Biden administration on Tuesday for resuming oil and gas leasing on public lands despite ample evidence that doing so will exacerbate the fossil fuel-driven climate crisis.

The lawsuit came as the U.S. Department of the Interior (DOI) and its Bureau of Land Management (BLM) prepared to hold oil and gas lease sales in Montana, North Dakota, Nevada, and Utah beginning on Wednesday—the first onshore auctions since President Joe Biden paused the federal leasing program shortly after taking office—with more scheduled in Colorado, New Mexico, Oklahoma, and Wyoming. Plaintiffs estimate that these lease sales will open more than 140,000 acres of public land to fossil fuel production.

“Overwhelming scientific evidence shows us that burning fossil fuels from existing leases on federal lands is incompatible with a livable climate,” Melissa Hornbein, senior attorney with the Western Environmental Law Center, said in a statement.

The DOI’s failure to acknowledge the local and planetary impacts of these new lease sales, said Hornbein, “is an attempt to water down the climate effects of the decision to continue leasing, and is a clear abdication of BLM’s responsibilities under the National Environmental Policy Act.”

As the plaintiffs explained in a statement:

“The groups assert that BLM has violated environmental laws by continuing to authorize fossil fuel extraction on public lands. The challenged lease sales are expected to result in billions of dollars in social and environmental harm, including negative impacts on public health, air and water quality, and local wildlife, such as the embattled greater sage grouse and other endangered species.

The lawsuit cites a failure of the Interior Department and BLM to uphold their responsibility under the Federal Land Policy and Management Act, which requires Interior to prevent “permanent impairment” and “unnecessary or undue degradation” of public lands from oil and gas development. It also calls for BLM to prepare a comprehensive environmental impact statement. That should analyze the compatibility of the predicted increased greenhouse gas emissions with the urgent need to avoid the catastrophe of 1.5° C of global warming, rather than in piecemeal analyses.

“We’re out of time and our climate can’t afford any new fossil fuel developments,” said Taylor McKinnon of the Center for Biological Diversity. “By leasing more of our public lands to oil companies, President Biden is breaking campaign promises and falling dangerously short of the global leadership required to avoid catastrophic climate change.”

Several analyses show that continuing to exploit the world’s already-existing oil and gas fields is incompatible with meeting the Paris agreement’s goal of limiting global temperature rise to 1.5ºC above preindustrial levels by the end of the century.

To avoid blowing past that threshold—beyond which the consequences of the climate emergency are projected to grow increasingly deadly, especially for the low-income populations least responsible for planet-heating pollution—governments must halt new fossil fuel projects and rapidly phase out existing production.

“Moving forward with these lease sales flies in the face of science and any chance for us to meet our climate goals,” said Dan Ritzman, director of Sierra Club’s Lands, Water, Wildlife campaign.

The moratorium the White House enacted last January did not affect existing leases. The Biden administration approved 34% more permits for oil and gas drilling on public lands in its first year than the Trump administration did in 2017, prompting environmental groups to file a separate lawsuit two weeks ago.

“Federal minerals belong to the public and should be managed in the public interest,” he added, “which clearly dictates keeping federal fossil fuel deposits safely buried underground.”

Armageddon comes November 8th. Pundits and progressives have been warning Democrats for months that if they don’t change course and achieve significant legislation promised in 2020, they will go down in flames on election day, along with our democracy. The tone of these warnings is imbued with the implication that the party, and especially President Biden, either doesn’t believe this or that it is flummoxed on how to avoid the calamity. But is this case?

To buy into this misconception, one must assume that the party has no access to polls, political advisors, focus groups, and constituent complaints or that the gerontocracy currently in control simply can’t comprehend this inevitability. Time to take off the rose-colored bifocals and see the world as it really is. It’s not that the party wants to lose, it’s just that it’s not that into winning. How could this be? Isn’t winning the ultimate goal?

One can only hypothesize about reasons for not fighting roundly to enact policies that would help it triumph. Surely, first on the list is that enacting progressive legislation would alienate Democrats’ corporate puppet masters. With their win of the presidency and both houses of congress in 2020, came the overwhelming responsibility that they must accomplish something. And this posed a serious problem—one that it created for itself during the Clinton administration when it made the Faustian bargain to skew policies away from its working-class base in favor of corporatism. This decision tied the Gordian knot that’s plagued it ever since: the cliché of having to serve two masters. Need we ask which of those won? Besides, win or lose, the money keeps pouring in.

Perhaps, on the other hand, the party simply deludes itself into thinking that voters could not be crazy enough to restore Republicans to power. But people are seething because nothing to better their lives is getting done. As liberal author Paul Waldman states, “Confronted with a vacuum, people will default to blaming the party in power.” The word most often used to define Democrats is “weak,” not something Americans admire. They’re more likely to prefer bad, but strong.

Could the party be thinking longterm? “We’ll take a big hit in 2022. Then the public will finally see how bad Republicans are, and we’ll roar back in 2024?” The problem here is when Republicans gain power, unlike Democrats, they use it to maximum advantage, a result that could sideline Democrats for decades.

True, with the exceptions of passing the infrastructure bill and the anemic gun-control legislation, they can blame the corrupt and recalcitrant Joe Manchin and Kyrsten Sinema. Yet, there’s always a Manchin, a Sinema, or a Joe Lieberman. Lieberman provided Obama with his excuses, but how genuine was this when one is aware that Obama selected Lieberman as his mentor when he was elected to the Senate?

How much effort did Biden exert to sway Manchin and Sinema? He spent months negotiating with them, even after it was clear that they were just playing him. He never once used the bully pulpit, going to their states to convince the populace that their senators were obstructing the Build Back Better plan, which would decidedly have benefitted them.

Biden ran on his prowess of being able to work with and persuade congressional members. Compare his bloodless efforts with arm-twisting Lyndon Johnson, who knew everybody’s peccadilloes, details of their love lives, and everybody’s price, whether it was new pork for their district or just a White House photo-op with their spouses. LBJ once said: “Smile and shake hands and thank everybody. Then just cut their peter off and put in your pocket.”

Even the centrist Democratic Congressional Campaign Committee knows exactly what’s happening. In their April poll, they found that in battleground districts, generic Republicans lead generic Democrats 47 percent to 39 percent, an ominous indicator for the next election. The party seems to have nothing but contempt for its base by never delivering, except incrementally, on campaign promises even when they have the votes—something the Republicans can’t be accused of.

Certainly, Rule Number One in politics is hold onto your base. Their attitude seems to be, “Where’s the base going—to vote Republican?” Most won’t, but that ignores the fact that they can simply sit out elections. In the latest primaries, Republican turnout has been up 32 percent, while Democratic turnout declined three percent.

So what’s the Democrat’s course of action? Instead of courting the base, Democrats spend resources to sway elusive independents and “never-Trump-Republicans.” In its most perverse move, the Nancy-Pelosi-aligned House Majority PAC poured millions of primary dollars into ads promoting extreme right-wing Republicans, hoping they will provide more favorable general election matchups. Ignoring the moral implications of touting democracy-destroying candidates, what could go wrong?

Three May polls indicate that youth-voter support for Biden has dropped anywhere from 16-21 percent in the past year. The combination of millennials and Gen Z comprises 65 million voters, the largest bloc in American history. Disillusionment is hardly a surprise, considering that Biden, who promised student-debt relief through executive order, has forgiven only that of students attending Corinthian Colleges.

Many young people are environmental activists, and again Biden has disappointed.

The death of the Build Back Better act is the most damning, but Biden has actually made things worse in some instances. For example, the Center for Biological Diversity is suing the administration for issuing more than 3,500 oil- and gas-drilling permits in New Mexico and Wyoming.

Biden, whose hair should have been on fire after the leak of the Alito memo regarding Roe v. Wade, tepidly remarked when the final ruling came down, “Quite a radical decision.” He’s virtually incapable of using the word abortion. Many suggested executive moves even before the final decision: enabling greater access to abortion medication; providing resources for child care, lost wages, travel vouchers for women who must go out of state; and moving military families to obtain abortions.

For seniors, he’s refused to use patent seizures to lower drug prices and left in place large increases in Medicare premiums. Representative James Clyburn’s disingenuous “I don’t know what’s required here” is belied by the plethora of suggested remedies. It’s true that many of these executive orders could elicit law suits, but even if Biden were to lose in court, at least he’d be seen trying.