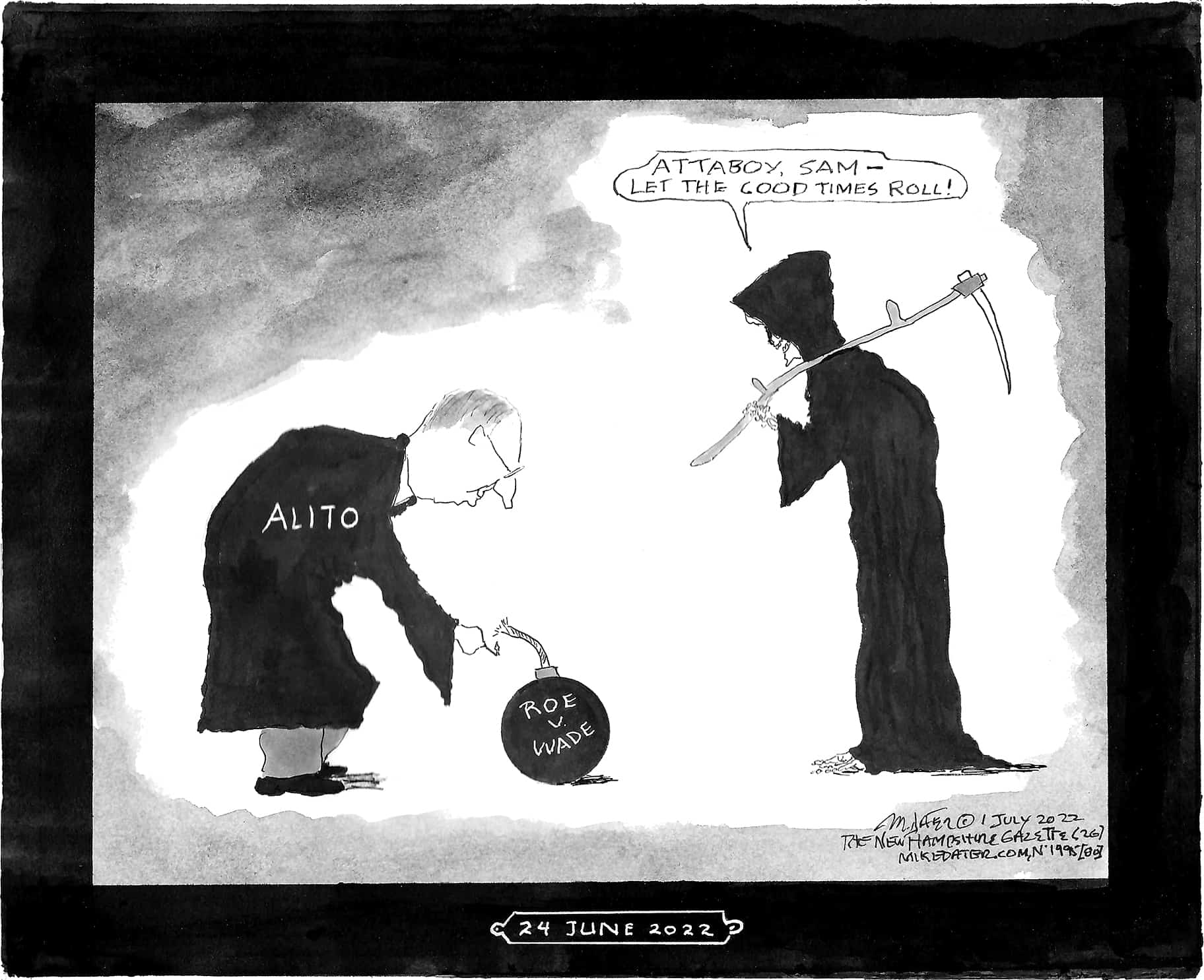 Though it was long before our time—Julius Caesar’s assassination predated our founding by seven times our lifespan to date*—we often daydream of life in ancient times. What was it like to live in a world controlled by capricious and uncaring gods?

Now we know. Last week certain Supreme Beings—half a dozen unelected religious zealots, five of them appointed by politicians who lost the popular vote, and several of whom likely perjured themselves in order to get the gig—declared holy war on us mere mortals.

Thursday they threw out gun bans, overthrowing a precedent going back a century and a half. These may be best remembered through the 1993 movie Tombstone. It showed the Earp brothers enforcing local law prohibiting random cowpokes from packing iron any-damn-where they pleased.

The film was historically accurate, and Tombstone was no outlier. As Matt Jancer wrote for The Smithsonian in 2018, one thing “Tombstone, Deadwood, Dodge City, or Abilene…had in common: strict gun control laws.” The same was true, to “varying degrees, in the once-rowdy frontier towns of Nevada, Kansas, Montana, and South Dakota.”

These revisionist Supreme Beings, though, would have us believe that Kurt Russell, Sam Elliott, and Val Kilmer sold us all a bill of goods. In effect they are saying that the real Wyatt, Virgil, and Doc were just a mob of well-armed hypocrites—Stalinistic enemies of freedom, cruelly oppressing upstanding citizens like the Clantons and the McLaurys.

In our brave new neoliberal† Nirvana, Americans now have more freedom than ever to choose their weapons. Typically we’ve gone for the cutting word. We shall see how we fare in a nation full of Glocks.

Exciting as this was, our black-robed overlords were just getting started. The next day, apparently deeming recent public debate insufficiently robust, and wanting to give us something truly worth fighting about, they unleashed the real Kraken.

Well over half the country experienced once again the defining sensation of our times: being shocked but not surprised. Roe v. Wade? Done and dusted. Women, you are cordially invited to kiss your bodily autonomy goodbye. The decision whether you will bear a child is no longer a matter for you and your doctor. Instead, your mostly-male state legislators will now decide for you.

We suppose one could argue that the Supes were being kind. An unprecedented leak of Alito’s draft opinion—what true God needs more than one name?—provided us with a warning.

One could just as easily argue the opposite, though. Why pass up the chance to torment your subjects with a month of anticipatory dread?

Seven out of ten Americans alive today have only ever known a post-Roe world. Out of the fifteen Justices who have been raised to Godhood since the Roe decision, nary a one has dared to declare that they would overturn that precedent.

Had any of them done so, they never would have made it past their Senate confirmation hearings. These extravaganzas are yet another example of Americanized kabuki. To prove they are qualified for apotheosis, a candidate must demonstrate an ability to say nothing with enough words to intimidate anyone unable to match their glibness. The inarticulate need not apply.

Here are Alito’s relevant remarks to the Senate in 2006: “Roe v. Wade is an important precedent of the Supreme Court. …it has been on the books for a long time. It is a precedent …. It has been challenged. It has been reaffirmed. But it is an issue that is involved in litigation now at all levels.”

Sixteen years later, writing from the comfort of the high bench, deep within his columned temple, Alito showed that he could be more direct: “Roe was egregiously wrong from the start.”

Reactionaries posing as conservatives like to remind us heathens that actions have consequences. If they would but listen, we would agree.

The question is, consequences for whom? Alito and his ilk have no doubt saved—for a time, at least—innumerable zygotes, blastocysts, and fetuses. In the process, though, they will also have killed an unknown number of women who would otherwise have lived—half a century of propaganda notwithstanding, it is safer to have an abortion than it is to give birth.

This would be less of a problem if the U.S. had a health care system. Instead we seem to have a system centered on billing for health care whether we get it or not.

According to the American Journal of Managed Care, referencing a 2020 report from The Commonwealth Fund, “Among 11 developed countries, the United States has the highest maternal mortality rate, a relative undersupply of maternity care providers, and no guaranteed access to provider home visits or paid parental leave in the postpartum period.”

While apparently overlooking this modern evidence, Alito drew in his opinion on the words of the English barrister Sir Matthew Hale (1609–1676). We hope this does not foreshadow even more draconian decisions in the future.

We’ll know we’re really in trouble if Alito cites Hale’s rulings in one particular 1662 trial: two women were hanged after being found guilty of witchcraft.

The more we interrogate this decision, the more arbitrary and irrational it appears to be. Why stop at 1662?

Why not go back another millenium, to the Catholic Saint Brigid of Kildare (c. 451–c. 525)? She caused the fetus of a pregnant nun to miraculously disappear.

† Neoliberalism is a policy model that encompasses both politics and economics and seeks to transfer the control of economic factors from the public sector to the private sector. Many neoliberalism policies enhance the workings of free market capitalism and attempt to place limits on government spending, government regulation, and public ownership. – Investopedia.org.