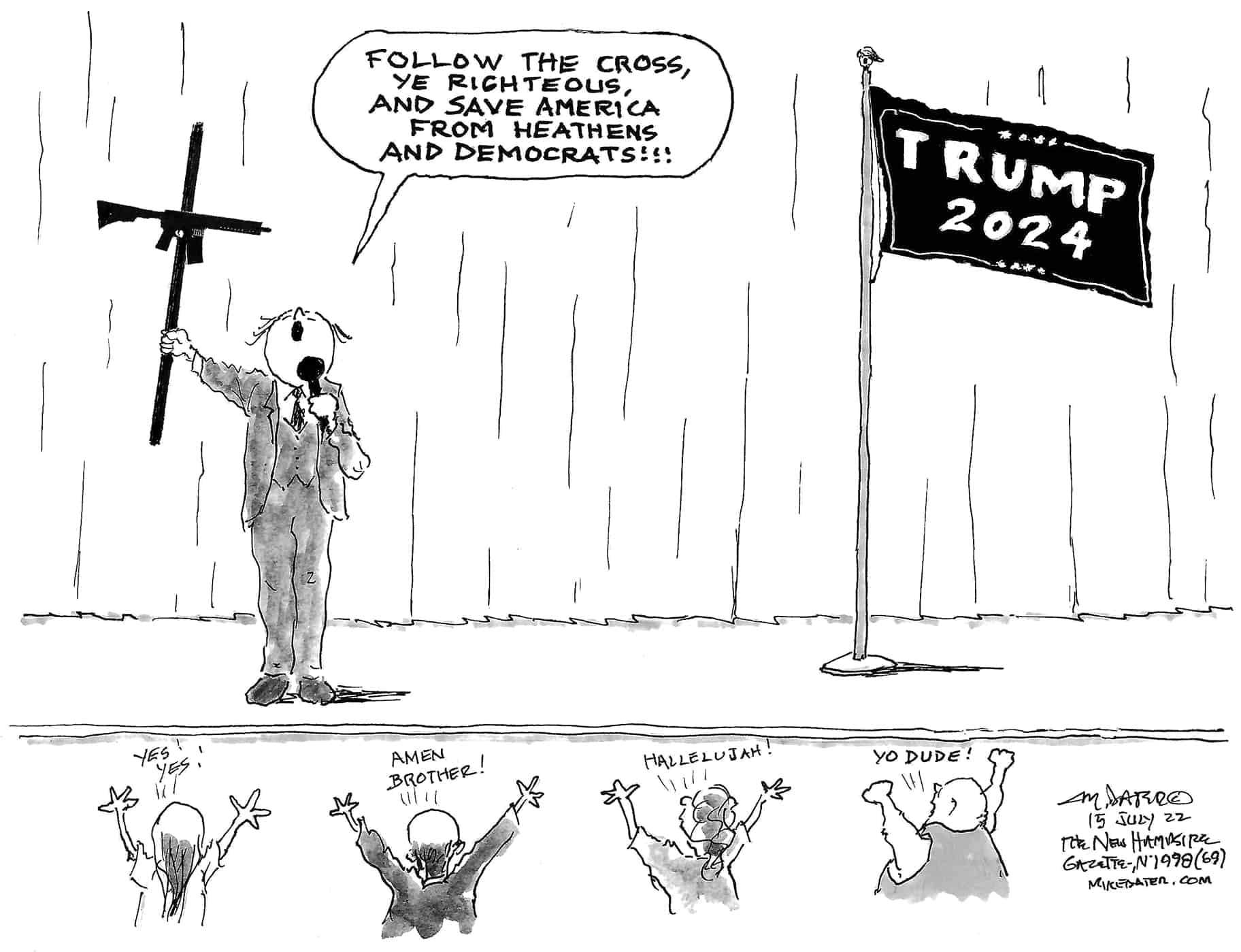 Just when we thought the Supreme Court had done all the damage it could in one session, it decided to kill off more of us.

Yes, we know, this is getting monotonous. We Ranted about the Court just last fortnight, and now here we go again. We are so sorry—sorrier than we can say. When the Court rules, though, that the EPA cannot regulate poisonous emissions from coal-fired electrical power plants, we can hardly be expected to remain silent.

Air pollution currently causes one out of every six deaths, scientists say. Apparently that’s not enough.

Having attended neither Harvard nor Yale, we have no idea how the Six Horse’s Asses of the Apocalypse Court arrived at this conclusion. Perhaps they consulted with The Founding Fathers by huddling over a Heritage Foundation™ Ouija Board.

Whatever the process was, now we know: God’s intention was that the rights of the stockholders of utilities and coal companies to make a profit should transcend any putative rights of post-born fetuses to inhale air that has not been poisoned. If only someone had warned us while we were still in the womb, we might have made other arrangements before entering such a world.

Now that it has wrapped up this session by stimulating the economy’s deathcare sector, the Court indulged once again, as it did with its Roe v Wade leak, in a bit of ominous foreshadowing. When they reconvene in the fall, in addition to their robes, the Justices will wear spiked golf shoes, the better to dance on the shredded remains of our beleaguered democracy. Not literally—so far as we know—but that seems to be their general intent.

Democracy, you see, is a problem.

Democracy can be kind of icky, when you really think about it. It presumes that everyone has equal rights. That sounds fine in the abstract, but let’s get real—what kind of cockamamie system gives equal power to a guy on the back of a garbage truck and a guy in the back of a limo? When considered from a certain perspective—the back seat of a limo, for example—it just doesn’t make any sense.

Moore v Harper, though it looks to be yet another garden variety gerrymandering case, may actually be a Trojan Horse—one which might solve that nagging problem for the limousining class.

Republicans across the country did quite well in the 2010 mid-term elections. Democrats would have us believe that the high turnout was inspired in part by the presence of a Black man in the White House; such slanderous assertions, though, while obvious on their face, are difficult to prove in a court of law—especially when the law won’t allow them into the courtroom.

In North Carolina, they made the most of their opportunity by creating “districts [which were] more severely gerrymandered than any districts in modern history,” according to FacingSouth.org.

Why, then, to return to our question, would our Supreme Beings waste their beautiful minds on a gerrymandering case? Because it will give the GOP a chance to further de-democratize our political system.

Open the trap door in the belly of that Trojan Horse, and out falls the “independent state legislature theory.”

This theory, as Eliza Sweren-Becker of the Brennan Center recently explained in the L.A. Times, interprets the Constitutional clauses which give states the authority to regulate federal elections in a new and radical way. It contends “that these clauses grant state legislatures near absolute power over the laws governing elections for federal office—leaving state courts, state constitutions, state governors and other state entities powerless to stop even the most extreme gerrymanders and voter suppression laws that a state legislature could devise. It’s just as nutty as it sounds.”

This independent state legislature theory may sounds familiar—because it’s the same one Sidney Powell and her ilk used when they tried to steal the last election for Dolt #45.

Should our unelected Justices appointed by Presidents who lost the popular vote give the thumbs-up to this nutty theory, Sweren-Becker warns that they would be removing “many checks and balances on state legislators, unleashing the very bodies that have been enacting laws that make it harder to vote—particularly for Americans of color—and easier to interfere in election outcomes. Under this theory, the only remaining arbiter as to the lawfulness of state legislatures’ handiwork? The Supreme Court—which has been steadily dismantling what little remains of federal law protections for our elections.”

Gee—what are the odds that a clique of power-mad freaks might decide to increase their own power? A dissent in a previous case, signed by Gorsuch, Alito, Kavanaugh and Thomas, suggests that all four may be on board already.

Where could all this lead? Michael Luttig, the retired Republican Judge who recently testified before the January 6th committee, said it was part of a plan to “overturn the 2024 election if Trump or his anointed successor loses again in the next quadrennial contest.”

This full-court press to reduce the political power of ordinary citizens really should come as no surprise. The “all men”—kindly note the gender—who were created equal in 1776 were white and owned property. Working stiffs, non-whites and women need not apply.

To whatever extent such riff-raff finally managed to finagle their way into voting booths, it was only due to herculean efforts on their part, against great resistance. As Frederick Douglass said in 1857, “Power concedes nothing without a demand. It never did and it never will.”

May Douglass forgive us for adding to that, power will reclaim power whenever it can, unless the people prevent it.