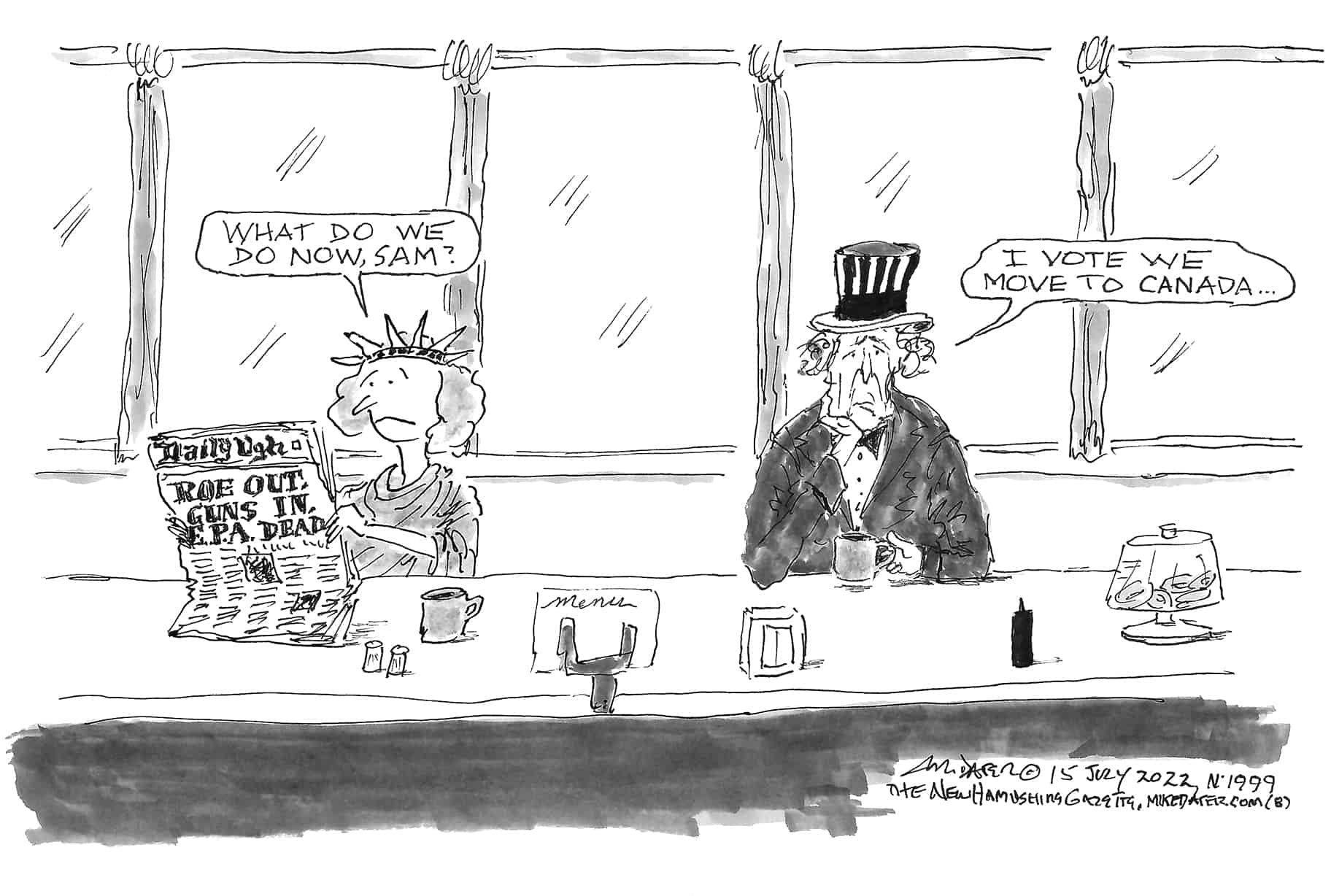 Social Security Works, a progressive advocacy group, is leading the charge against Biggs, highlighting his role in the George W. Bush administration’s failed attempt to privatize the New Deal program in 2005. At the time, Biggs worked on Social Security as an associate director of Bush’s National Economic Council.

The group, whose president currently serves on the Social Security Advisory Board (SSAB), is also sharing a sample call script for those who wish to contact their representatives about Biggs.

“The Senate can, and must, block this terrible nomination,” the organization wrote. “Please call your senators at 202-224-3121 and tell them to vote NO on Andrew Biggs.”

The White House announced Biggs’ nomination in May, to little notice at the time.

Last month, The Lever’s Matthew Cunningham-Cook called attention to the president’s pick and warned it suggests “there could soon be a coordinated push in Washington to cut the Social Security program, which provides retirement, disability, and survivor benefits to 66 million Americans.”

While Biden vowed on the campaign trail to back an expansion of Social Security, he has previously supported cutting the program’s benefits. Biden was vice president when former President Barack Obama proposed a “grand bargain” with the GOP that would have entailed cuts to Social Security.

Biggs, too, has a long record of advocating Social Security cuts. As Cunningham-Cook wrote last month, “For years, Biggs has been a vocal critic of expanded Social Security and workers’ right to a secure, stable retirement free from the vagaries of the stock market.”

“He has dismissed the retirement crisis as a non-issue and as recently as 2020 blamed problems with the Social Security system on ‘older Americans’ game of chicken,’” he added. “While the seat on the bipartisan board is by tradition assigned to a Republican, Biden could have chosen a moderate candidate—or even leaned on precedent to avoid the nomination process altogether. Former President Donald Trump routinely refused to nominate Democrats for seats on boards and commissions.”

Simmering outrage over Biggs’ nomination to serve on the SSAB, formed in 1994 to advise the president and Congress on Social Security, comes as progressives are demanding expansion of the program’s modest benefits—while Republican lawmakers, as usual, eye cuts.

Last month, Sens. Bernie Sanders (I-Vt.) and Elizabeth Warren (D-Mass.) led the introduction of the Social Security Expansion Act, which would lift the cap on income subject to the Social Security payroll tax and boost the program’s annual benefits by $2,400.

“At a time when half of older Americans have no retirement savings and millions of senior citizens are living in poverty, our job is not to cut Social Security,” Sanders said at the time. “Our job must be to expand Social Security so that every senior citizen in America can retire with the dignity they deserve and every person with a disability can live with the security they need.”

Voters in the United States overwhelmingly support Democratic proposals to expand Social Security for all recipients to cover higher costs of living and oppose Republican proposals to completely end the federal program—established during the New Deal era to improve economic security for retirees, people with disabilities, and widows and widowers—before the end of the decade.

That’s according to a new survey conducted from June 17-21 and published Monday by Data for Progress, which found that a whopping 83 percent of likely voters support expanding Social Security benefits to keep up with rising costs, including 86 percent of Democrats, 84 percent of Republicans, and 79 percent of independents.

Privatization of the program remains unpopular across the political spectrum, with 68 percent of likely voters—including 75 percent of Democrats, 70 percent of Republicans, and 59 percent of independents—opposed to Wall Street-backed schemes that would facilitate the movement of Social Security benefits from a guaranteed government fund into the volatile stock market.

While Biden pledged on the campaign trail to support an expansion of Social Security, he has previously backed slashing the program’s benefits. Biden was vice president when former President Barack Obama proposed a “grand bargain” with congressional Republicans that would have included cuts to Social Security.

Meanwhile, a little-noticed budget document published last month by the Republican Study Committee (RSC)—a group to which nearly 75 percent of House Republicans belong—reiterates right-wing myths that the program is headed toward insolvency and calls for raising the retirement age by three months per year through 2040. As a result, people born after 1978 would not be eligible to receive full Social Security benefits until the age of 70.

The RSC’s bid to postpone Social Security eligibility, outlined in their so-called Blueprint to Save America, is not even the most extreme GOP proposal on offer, considering what Sen. Rick Scott (R-Fla.), chair of the National Republican Senatorial Committee (NRSC), has put forward.

Scott’s widely panned 12-point “Plan to Rescue America” proposes hiking taxes on the poorest 40 percent of U.S. households and sunsetting “all federal legislation” after five years—a move that would eliminate Social Security, Medicare, civil rights laws, and other measures unless Congress actively votes to reauthorize them.

Nevertheless, Sen. Lindsey Graham (R-S.C.), ranking member of the powerful Senate Budget Committee, said last month during a debate with committee chair Sanders that “entitlement reform is a must,” indicating that the GOP is once again laying the groundwork to gut Social Security, Medicare, and more if it regains control of Congress in November’s pivotal midterm elections.

Likely voters, when informed that congressional Democrats are proposing to expand Social Security benefits while their Republican counterparts are proposing to swiftly terminate the program, told pollsters that they would be most likely to support a Democratic candidate over a Republican one by a margin of 55 to 31.

This suggests that campaigning on Social Security expansion could help Democrats maintain or even bolster their slim majorities in the House and Senate.

We treat Twitter as the poor newspaper’s AP. It’s always got the latest news first. If you curate your feed wisely, it can be very useful. We have an account—@NHGazette—but we rarely use it to post. We’re a fortnightly, for pete’s sake. Why would we try to compete with all that?

We did break radio silence on July 6th, though, to draw attention to a Kickstarter project. Just making a pledge would not have been enough. We’d have posted a tweet about One More Mission even if its producer-director Ed Gray had not been a high school classmate. Ed always was a couple of steps ahead; it was he who first introduced the Editor to Paul Krassner’s The Realist.

The following promotional text comes from the film’s Kickstarter campaign. We’re running it here because it goes a long way toward explaining how America got to where it is today.

Breaking The Cycle Of War

Our documentary film One More Mission tells a 50-year-old story. But it’s one that most Americans have never heard—and one that urgently needs re-telling today.

Remember what happened in 2001? And again in 2003? Our leaders said, yes, we’d have to sacrifice. But the benefits of going to war would far outweigh the costs. And in the end, we’d achieve victory.

But the costs proved to be much greater than we expected. Thousands of Americans were killed. Hundreds of thousands were wounded or afflicted with traumatic brain injuries or PTSD. In Iraq, Afghanistan and other countries, the death toll runs into the hundreds of thousands, and millions were injured or forced to become refugees. Yet in spite of America’s overwhelming military power, and the courage of its men and women in uniform, it didn’t win those promised victories. Iraq still teeters in instability. And in Afghanistan, the Taliban is back in power.

What will happen the next time a president tells us that Americans must fight and die? Are we doomed to keep repeating this cycle? Isn’t there some way to make people appreciate the horror and futility of war?

What few Americans realize is that fifty years ago, thousands of young veterans of the war in Vietnam succeeded in doing just that. They were members of a group called Vietnam Veterans Against the War—VVAW. And they were the first veterans in U.S. history to demand that their country end the war they had fought in. VVAW played a crucial role in turning the tide of public opinion against the war and pressuring President Nixon to finally end it.

Many Americans were shocked by these outspoken young people. They were breaking with a deeply rooted belief: that people owe their country unquestioned loyalty during wartime. But these veterans took the radical step of denouncing what their country was doing in Vietnam. Why? Because they had discovered—while serving in that war—that it violated the even deeper moral values on which they’d been raised. And because of the physical courage they had proved on the battlefield, their acts of moral courage earned the respect—and won the support—of huge numbers of Americans.

But unfortunately, the story of VVAW has faded from American memory. Today, as the world is once again confronted by war, it is vitally important that we reclaim that story. By bringing the hard-won insights of these courageous veterans to a new generation, our hope is that we can help prevent yet another war.

One More Mission is a feature-length documentary film that tells the story of VVAW by interweaving the personal stories of eight featured characters. We follow the arcs of their stories going back to childhood. How did their families, schooling, and popular culture influence their decisions to enlist? (The majority of VVAW members had volunteered to serve in the military.) How did the reality of Vietnam change them? What was it like to publicly oppose your own government during wartime? What was it like to have your government strike back at you? And how did the choices they made as young people shape the course of their lives?

To tell our characters’ stories, we weave together powerful interviews with personal photos, archival footage of VVAW’s dramatic protests, impressionistic cinematography that retraces their life journeys, and contemporary footage that brings us into their lives today. The veterans’ stories differ in many ways. But there is one strong conviction that all of them share. We have to find a way to stop repeating the lethal mistakes of the past.

The film also looks at VVAW’s impact on America. VVAW members led the fights to win official recognition for PTSD and to help the victims of the toxic herbicide Agent Orange. VVAW’s example influenced many Iraq and Afghanistan veterans to speak out against those wars.

UPDATE: The Kickstarter campaign has succeeded—but additional support will still be needed to complete the film. People can make tax deductible charitable contributions through Ed’s nonprofit sponsor at www.catticus.org/one-more-mission.