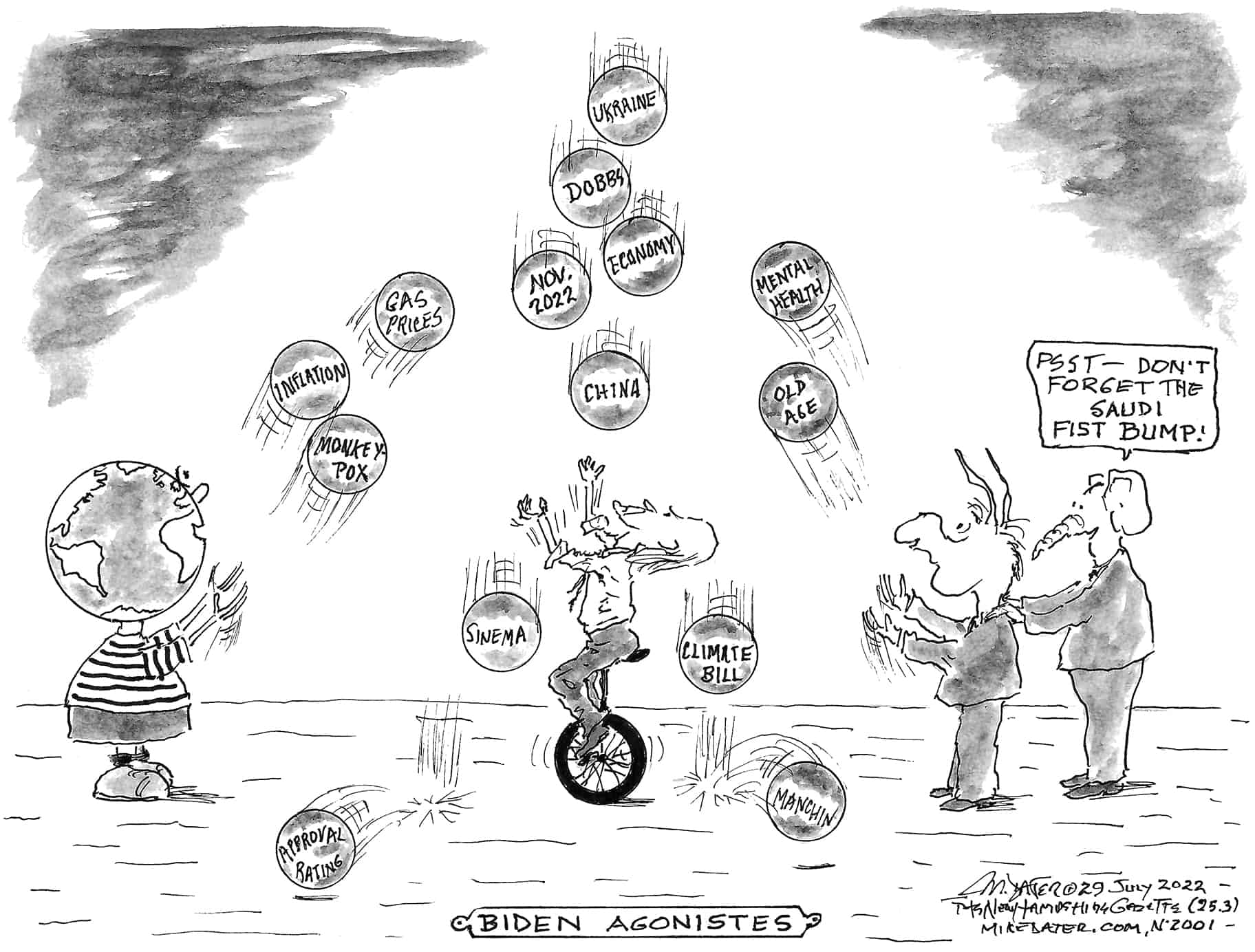 In the month of June, as the House January 6th Committee revealed alarming new details on former President Donald Trump’s coup attempt, corporate trade groups and Fortune 500 companies donated more than $819,000 to the Republican members of Congress who voted against certifying the 2020 election results.

That’s according to a new analysis provided to Common Dreams by the watchdog organization Accountable.US, which has been tracking corporate contributions to the so-called “Sedition Caucus”—the group of 147 Republican lawmakers who, just hours after the January 6th attack on the U.S. Capitol, voted to overturn the 2020 election in an attempt to help Trump maintain his grip on power.

Those three lawmakers are among the 23 GOP members of Congress set to join Trump this week at the America First Policy Institute Agenda Summit, an event led by a think tank aligned with the former president. Tuesday Trump was slated to deliver the keynote address at the Washington, D.C. summit, which has been billed as an effort to outline a right-wing agenda as the former president gears up for another run.

McCarthy and Scalise have been the top recipients of corporate donations since January 2021, bringing in $701,000 and $617,500 respectively from corporate interests, some of which made a show of condemning the January 6th attack and voicing support for the democratic process.

“The more the January 6th committee details how close we came to losing our democracy, the more corporations owe an explanation as to why they keep funding Donald Trump’s pawns in Congress who tried to finish what the insurrectionists started by voting to throw out the 2020 election results,” said Kyle Herrig, the president of Accountable.US.

“Companies that claim to support democracy but fail to align their political spending with their stated values need to make it clear to their customers, shareholders, and own employees that they value something much more—having political influence over lawmakers no matter how dangerous their views,” said Herrig.

“Companies that dismiss the majority of Americans who want to see businesses more engaged in the defense of democracy,” Herrig added, “do so at the risk of their reputation.”

The World Burns and the Richest Profit

As the effects of the climate crisis are seen in global heatwaves and droughts, oil firms are booming.

Yet the FTSE 100 [Financial Times Stock Index] is worth more than ever, corporate profits are higher than ever, there are more British billionaires than ever. And oil companies are richer than ever.

If we took climate change seriously, the petroleum industry would be bankrupt. These firms borrow billions against the future value of reserves they are yet to drill, but atmospheric physics demands we can’t burn that carbon if we wish civilization to survive.

If our modern societies are to continue to exist in recognizable form, oil companies’ assets are worthless. And if we aren’t, they are still worthless.

But in reality, fossil fuel giants are doing better than ever. Last week, Shell said it expected to revise upwards the value of oil and gas assets it had previously written down, causing its share prices to leap for joy.

Saudi Arabia, which has struggled for investment ever since it allegedly hung a bunch of businessmen by their feet and beat them until they coughed up their bank details, has been welcomed in from the cold.

In May, oil exporter Saudi Aramco overtook Apple as the most valuable company in the world—the most valuable in human history. This week, just months after pretending to take the climate emergency seriously at COP26, Joe Biden has gone to fist bump Saudi’s narco-in-chief and beg him to pump more death into capitalism’s veins.

Meanwhile, as temperatures across England rise above levels with which human homeostasis can cope, the climate crisis collides with the health crisis.

Crushed by a dozen years of Tory austerity and the government’s incompetent response to COVID, National Health Service waiting lists are already at an all-time high. Accident and Emergency units are “on the fringe of collapse,” with ambulances queueing up outside hospitals, unable to hand over their patients. This means that over the next few days—when experts predict we will see up to ten thousand excess deaths as a result of the heatwave—vast numbers of people will likely spend time cooking in ambulances.

And with world food supplies already shaken by the war in Ukraine, the heatwave also means worsening global hunger.

Italian farmers are expected to lose a third of summer crops like rice and corn, while Sardinia’s fields have been scoffed by a plague of locusts. In China, soaring temperatures are drying out soil, devastating agriculture of all kinds. East Africa is experiencing one of its driest rainy seasons in 40 years, which, combined with the fact that 40 percent of Africa’s wheat usually comes from Russia or Ukraine, leaves tens of millions facing hunger.

Food and agriculture billionaires, on the other hand, raised their collective wealth by 45 percent over the past two years, while global food giant Cargill posted a 63 percent increase in its profits for last year, the best haul in its nearly 160-year history.

As the world moves out of pandemic mode (if not actually out of the pandemic), we’re entering a new phase of global capitalism.

But this isn’t the inevitable future. The faint echo of promises to “build back better” may have disappeared, and, with politics in crisis, people are increasingly realizing that they are going to have to fight for that future.

In Britain, more and more unions are voting to strike against the plunder. As concern about the climate crisis grows, so will action against those driving it. Distrust of our broken politics has deepened, creating a deep volatility.

A vast political fight over what comes next has arrived, just as the Labour Party has abandoned the field and, in the coming months, we can expect something else to rush into that space.

Adam Ramsay is a special correspondent for openDemocracy.net, an independent international media platform headquartered in London with team members across four continents. You can follow him at @adamramsay. This article is published under a Creative Commons Attribution-NonCommercial 3.0 licence.

Over the past four months, Big Oil has rushed to raise gasoline prices—sometimes charging far more at the pump than the increased cost of oil would warrant—and dawdled to lower them when crude’s valuation declined, according to a new analysis released Monday by the progressive watchdog group Accountable.US.

“For months, oil and gas companies have price gouged consumers, squeezing record-breaking profits out of Americans and forcing many into dire financial straits,” Jordan Schreiber, director of Energy and Environment at Accountable.US, said in a statement.

When the cost of crude has risen, Big Oil has been quick to lift gas prices.

In other cases, price hikes at the pump have exceeded climbing oil costs, such as when a 2.64 percent uptick in the price of crude from May 27 to June 3 was accompanied by a 5.29 percent increase in the price of gas from May 30th to June 6th.

Meanwhile, when the cost of crude has fallen, Big Oil has been slow to act—if at all—and gas prices have either continued to soar or declined only slightly from one week to the next.

Even when the industry has lowered retail gas prices, it has failed to do so at a rate commensurate with the falling cost of crude.

But Khanna and Whitehouse’s proposal faces long odds given the GOP’s desire to capitalize on voters’ mounting anger at the state of the economy. Not only is it unlikely that at least ten Senate Republicans would support advancing debate on the bill, as required due to the filibuster, but it remains unclear whether right-wing Democratic Sen. Joe Manchin (W.Va.) would vote for it.

This work, originally published at CommonDreams.org, is licensed under Creative Commons (CC BY-NC-ND 3.0). Feel free to republish and share widely.