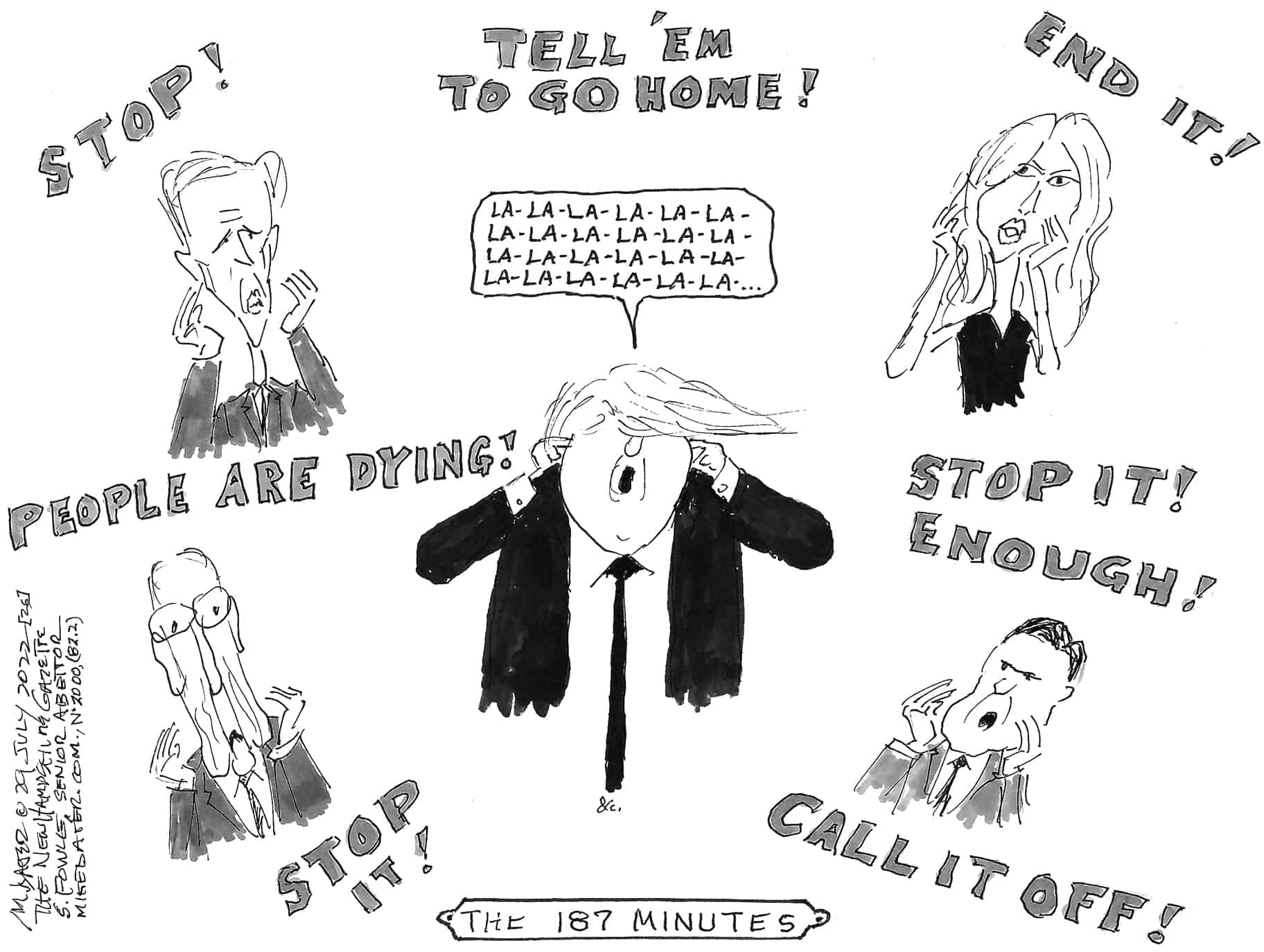 It’s a great time to be alive.

How can we say that? Well, have you considered the alternative?

We spend much of Monday, when we should have been writing, getting cardiovascular exercise. How many reps? We lost track. Mounting the stairs of our editorial tower, closing the windows against the deluge, opening them again to relieve the heat, then closing them again as endless waves of violent weather rolled through town.

We’re not complaining, mind you. It could have been worse. Just ask our new neighbor. He recently moved into a formerly-shabby little house which is now a realtor’s “hidden gem”—allegedly worth a million more than it was a year ago. A tree limb blew through the back window of his spiffy SUV.

So, we got off easy: just a few damp papers…that and higher taxes, of course, since gentrification inevitably raises the valuations of all the local hovels.

It could have been worse—and soon enough it will be. So, as the kids are saying these days, “Enjoy the coolest summer of the rest of your life.”

We remember a gentle, soaking rain that came earlier in the fortnight; it was memorable because it seemed unusual. Raging storms are now the norm, and thus the climate mirrors our politics.

Just as free-spending professionals raise their neighbors’ property taxes, so have “high-net worth individuals,” by bankrolling lunatics, roiled our political climate. We can’t help but wonder—what if this season’s politics are the sanest we’ll see in our lifetimes?

A House committee ran the latest episode of its popular January 6th documentary series last week. Though we all knew the plot, it was still pretty gripping.

Congressionally-authored TV has gotten markedly better since they dropped the ping-pong format. For too many decades the practice was to toss the microphone back and forth, with one side representing rationality and the other coming from some “alternate reality.”

The next time someone complains that Congressional Republicans never do anything for the public good, remind them that it was Kevin McCarthy’s decision to let Democrats run this show without input from Team Bizarro.

It has now been firmly established—almost entirely through the sworn testimony of Republicans—that on the afternoon of January 6th, Dolt #45 did exactly what many of us thought he had been doing: he watched Fox News while his fan base tried to overthrow an election and hang his second-in-command. When the Pentagon called, he didn’t pick up the phone. He was busy calling Senators, asking them to help throw out the results of the November election.

None of this, of course, should come as any surprise. Since long before he rode down his cheesy golden elevator, basking in hired applause, his mug has cried out for an accompanying black plaque, bearing three white characters: #45.

The Village Voice’s Wayne Barrett had this guy’s number forty years ago. His tutelage under Roy Cohn should have tipped off everyone else. His sordid life story should have taught us that it’s surprisingly hard to get convicted when you’ve got apparently unlimited access both to money and to lawyers.

For a man who never showed much interest in actually doing the work, he put a lot of energy into trying to hang on to the job. And why would he not? Now that his rap sheet is as long as a Pentagon budget, his only available Stay Out of Jail Card is a term as #47.

Of course, he could never pull it off, right? Please, tell us that it would be impossible for him to pull it off—again.

Yes, just as, in the halcyon summer of 2016, it was impossible to imagine the ludicrous figure riding that escalator would end up on Pennsylvania Avenue.

As we have mentioned previously, the gaggle of unindicted co-conspirators commonly known as the Republican Party have been doing their usual full-court press to give red state officials more power to monkey with elections.

Meanwhile, in a completely separate scheme, The Former Guy and his reactionary imagineers are scheming to bring back the Gilded Age.

Prior to 1883, it was common practice—to some degree, it was the whole point of politics—for a party newly in power to fire everybody they could and replace them with their own cronies. It was called the “spoils system,” as in, “to the victor goes the spoils.” The Pendleton Civil Service Reform Act mandated hiring on the basis of merit.

As Axios has recently reported, shortly before the last election, the Oaf in the Oval Office signed an executive order “which established a new employment category for federal employees” called Schedule F. It was quickly nixed by Joe Biden, but Axios says if #45 becomes #47, he will quickly reinstate it. Under its provisions he “could fire tens of thousands of career government officials with no recourse for appeals. He could replace them with people he believes are more loyal to him and to his ‘America First’ agenda.…

“Unions and Democrats would be expected to immediately fight a Schedule F order. But Trump’s advisers like their chances in a judicial system now dominated at its highest levels by conservatives.”

In entirely unrelated news, WFLA has reported that Corey Johnson, 29, of Ocala, Florida, drove a stolen Ford F-150 pickup to Patrick Space Force Base. “When Johnson tried to get on the base,” according to the WFLA account, “he claimed the President told him in his mind that he needed to take the vehicle and warn government officials that there were U.S. aliens fighting Chinese dragons.”

Our attempts to learn which President authorized Johnson’s mission have proven unsuccessful, but we have our suspicions.