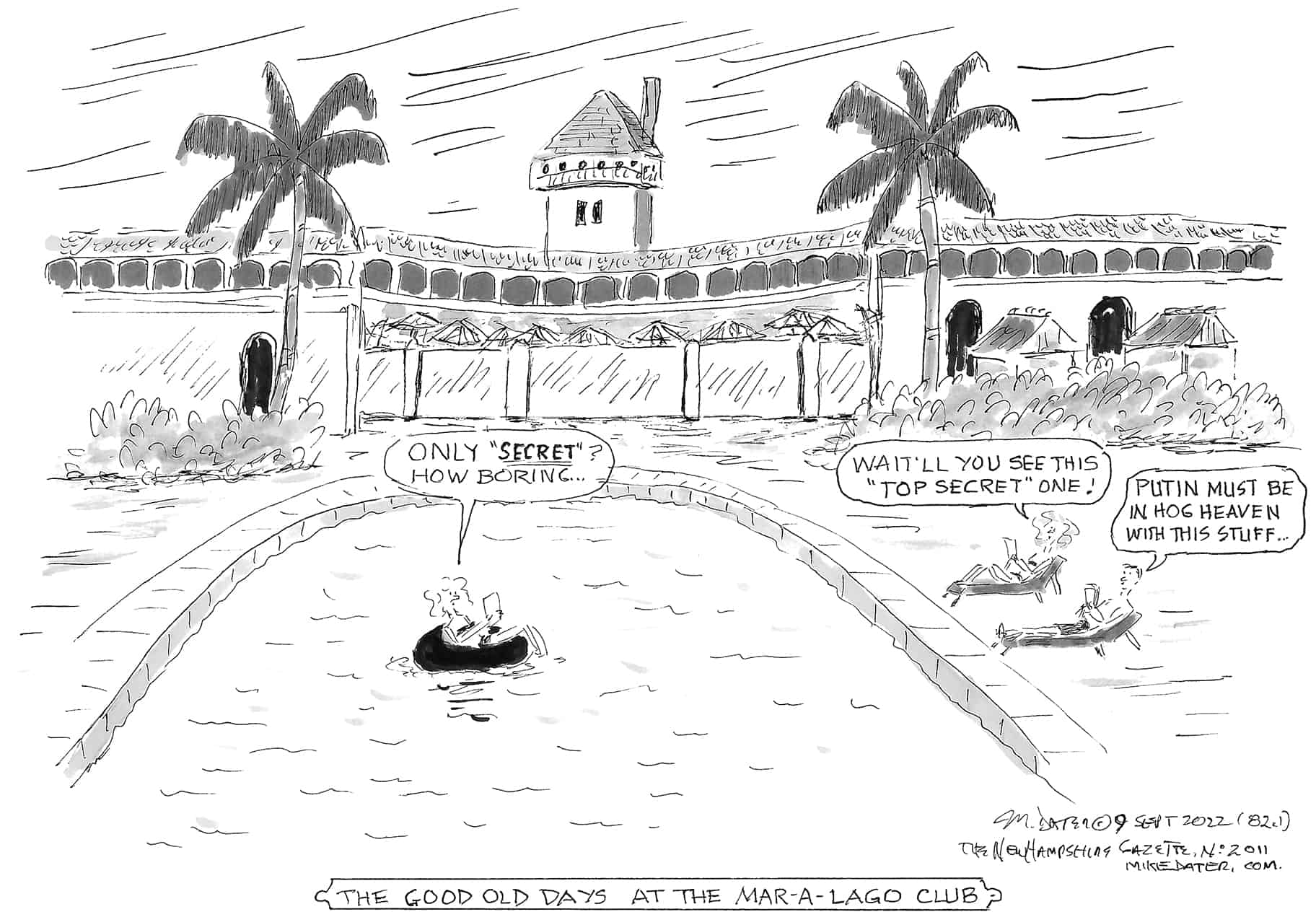 If only all our problems could be solved by jailing #45….

Even if the roll call at Leavenworth were to include the name of a former President in 2024, that would hardly assure that the nation had returned to normal operations. Equally-deranged replacements seem to be springing up like poisonous mushrooms after a toxic rain.

On Wednesday, the nerds at fivethirtyeight.com reported that “From the Carolinas to California, Montana to Florida, election denialism has spread across the country. Candidates who support former President Donald Trump’s false claims that the 2020 election was stolen will appear on ballots in nearly every state this fall.”

After reaching out to “every single Republican nominee for the House, Senate, governor, secretary of state and attorney general to determine their position on the 2020 election,” they concluded that out of “529 total Republican nominees running for office, we found 196 who fully denied the legitimacy of the 2020 election”—that’s well over one third.

Another 61 candidates “raised doubts about potential [election] fraud.” Add them to the paranoia pot and you’re up to 48.6 percent.

This would be less appalling if these were fringe candidates who were being shunned by donors. They would then be unlikely—due to our completely impartial and non-partisan market-based system of elections—to win office and turn our much-vaunted Constitutional Republic™ into a Fourth Reich.

We regret to inform our readers that, according to a report published at OpenSecrets, “Corporate PACs have given more than $22.2 million to election objectors since the January 6th Capitol attack.” Srijita Datta and Anna Massoglia reported on August 25th:

“Republican members of Congress who voted against certifying 2020 presidential election results received over $22.2 million from corporate PACs between January 7, 2021 and June 30, 2022, a new OpenSecrets analysis found.

“The 147 election objectors in the Senate and House voted against certification of President Joe Biden’s victory in Arizona or Pennsylvania amid a violent attack on the Capitol that injured police officers, forced lawmakers to evacuate and left at least seven people dead.

“Three members of what critics dubbed the ‘Sedition Caucus’ have since left Congress, and 122 are running for office in 2022. According to filings with the FEC, six Republican incumbents lost their primaries—three in the House and and three in the Senate.

“In the wake of the January 6th attack, scores of private companies declared they would completely stop, pause or reevaluate PAC giving to election objectors. But several corporations resumed PAC giving to these lawmakers within a month of the attack.

“More election objectors—52—received funds from Koch Industries’ PAC than any other corporate PAC. Home Depot PAC is a close second, donating about $593,000 to 44 members. Boeing Co. follows with $520,000 to 27 members.”

[Note: Having long scoffed at alarmist talk about election fraud, we may now have to eat a plate of crow. We must say, though, in our own defense, that all the election workers we know are probably Democrats. The following story suggests that—hard as this may be to believe—certain Republicans may possibly be guilty of the very crimes they accuse Democrats of committing. – The Ed.]

A former Republican county chair in Georgia who is under criminal investigation for allegedly posing as a fake elector for former President Donald Trump escorted GOP operatives into an election office on the same day a voting machine was breached there, newly released surveillance footage shows.

Security video from the same Coffee County elections office also shows that consultants from a former company that failed to prove fraud in Arizona during the 2020 election made multiple visits to the facility, The Washington Post—one of the media outlets that obtained the footage—reported on September 6th.

The video shows that Cathy Latham, a teacher and former GOP chairperson of Coffee County, led a group of data forensics experts into the elections office shortly before noon on January 7, 2021—the same day that confidential software and files were allegedly copied.

The theft was allegedly perpetrated at the behest of Sidney Powell, a former federal prosecutor and prominent purveyor of Trump’s “Big Lie” that Democrats stole the 2020 election.

Latham has claimed in sworn testimony that she taught all day on January 7th and only visited the elections office briefly after classes ended. She is one of 16 Trump supporters in Georgia who signed a bogus certificate claiming they were “duly elected and qualified electors for president and vice president,” part of an alleged scheme to create false slates of electors in seven swing states won by President Joe Biden, steal them for Trump, and ultimately overturn the 2020 presidential election.

Two of the data forensics experts seen in the January 7th footage, Scott Hall and Paul Maggio, have admitted to accessing a Coffee County voting machine at Powell’s request.

Atlanta-based SullivanStrickler, which employed four of the experts including Maggio, was last week subpoenaed by the Fulton County special grand jury conducting a complex criminal investigation into Georgia’s 2020 election.

Logan was the CEO of Cyber Ninjas, the now-defunct security firm hired by Arizona Republicans to find evidence of baseless claims of fraud in the 2020 presidential election. The company’s audit concluded that Trump lost Arizona by even more votes than the certified result and that there was no evidence of fraud.

The pair were allegedly involved in a separate but related criminal effort to subvert the 2020 election. The office of Michigan Attorney General Dana Nessel, a Democrat, said last month that a group of Trump loyalists including Republican state attorney general candidate Matt DePerno, state Rep. Daire Rendon (R-103), and Barry County Sheriff Dar Leaf conspired to feloniously access voting machines as part of an effort to overturn the election.

An investigation by state police and special agents for the attorney general’s office resulted in a petition to the Michigan Prosecuting Attorneys Coordinating Council seeking “prosecutorial review for charges” against nine people including DePerno, Rendon, Leaf, Lenberg, and Logan.

The petition states that potential charges in the case include—but are not limited to—conspiracy, using a computer system to commit a crime, willfully damaging a voting machine, malicious destruction of property, fraudulent access to a computer or computer system, and false pretenses.

According to the document, vote tabulation machines used in multiple Michigan jurisdictions were illegally taken to hotels and rented properties in Oakland County, where four people including Lenberg and Logan “broke into the tabulators and performed ‘tests’ on the equipment” that allegedly included running fake ballots through the devices.

Dubbed the “Doomsday Glacier,” Thwaites has been the subject of scientific concern for decades given its immensity—it is roughly the size of the U.S. state of Florida and, if melting continues at the current pace, it could raise global sea levels by 11 feet or more.

But a new study published in Nature Geoscience offers a first-of-its-kind look at the body’s transformation over time, finding that “sustained pulses of rapid retreat have occurred at Thwaites Glacier in the past two centuries.”

“Over a duration of 5.5 months, Thwaites’ grounding zone retreated at a rate of >2.1 km per year—twice the rate observed by satellite at the fastest retreating part of the grounding zone between 2011 and 2019,” the analysis notes. “Similar rapid retreat pulses are likely to occur in the near future when the grounding zone migrates back off stabilizing high points on the sea floor.”

Robert Larter, a marine geophysicist with the British Antarctic Survey, said Monday that the research shows Thwaites “is really holding on today by its fingernails, and we should expect to see big changes over small timescales in the future—even from one year to the next—once the glacier retreats beyond a shallow ridge in its bed.”

To explore past changes to the glacier and help chart out its possible future, a team of scientists led by Alastair Graham of the University of South Florida’s College of Marine Science traveled to West Antarctica to observe the sea floor in front of Thwaites using a sensor-equipped autonomous submarine.

“Over two extended survey missions, we targeted submarine troughs previously hypothesized as conduits for warm water access to the glacier grounding line,” Graham and study co-authors Lauren Simkins and Anna Wåhlin wrote in a summary of their expedition. “At both sites, the sea-floor also comprised of sills that likely served as former stabilizing points for the grounding zone of Thwaites. “

“For Thwaites, the importance of our results lies in two take-home messages. The first is that Thwaites has undergone significantly faster rates of retreat in the past than it is experiencing right now,” they continued. “This finding raises the potential upper ‘speed limit’ on our expectations for Thwaites behavior in the near future.”

“Second, our results show that very short (several months duration) pulses of non-linear grounding zone retreat occur, especially where the ice is retreating from flattish sea floors or flat-topped ridges,” they added. “These phases of rapid retreat are corroborated by modern observations, and demonstrate, collectively, that drastic changes in grounding line position might be expected, even from one field season to the next.”

Jane Molloy Porter, of Bucks Harbor, Maine, and Portsmouth, New Hampshire, died on the morning of July 18, 2022. She was 91 years old. For many years, Janes was a much-loved member of this newspaper’s 100 Proof Department. Many were the misspellings and grammatical errors that fell to her red pen.

Born February 6, 1931, in Boston, Massachusetts, to Paul Molloy, an English teacher, and Anne Baker Molloy, a children’s book author, Jane grew up in Winchester and Exeter, N.H. She graduated from The Northfield School and then Radcliffe College, in 1952, with a degree in art history. She worked at the Isabella Stewart Gardner Museum until 1955, when she married Eliot F. Porter Jr. of Belmont, Mass. After several years in Portland, Maine, she and her family moved to St. Louis. There, Jane worked for Craft Alliance, The Learning Center and the Landmarks Association of St. Louis. At Landmarks she co-authored with Carolyn Hewes Toft, Compton Heights: A Historical an Architectural Guide.

In the mid-1980s Jane returned to New England and settled in Portsmouth. At the Portsmouth Athenaeum she served as Keeper from 1986 until 2000, furthering her dedication to history and research. She oversaw the acquisition of the Peirce Building in 1995. In 2006, the Portsmouth Marine Society published Jane’s meticulous study of historic lighthouses along the New England coast, Friendly Edifices: Piscataqua Lighthouses and Other Aids to Navigation.

Since 1942, Jane spent summers in Bucks Harbor, Washington County, Maine and loved its rocky landscape and the artwork it inspired. She regularly visited galleries up and down the coast, befriending artists and filling her house with their work. With her formal training as an art historian and a sharp eye for her environment, Jane was studiously modest about her deep knowledge of vernacular architecture and folk art. She was also delightfully spontaneous and generous in sharing her interests and seriously funny when she chose to be, exhibiting an extremely dry wit. She loved all styles of music with a special affection for country and bluegrass.

Jane is survived by her four sons: Eliot F. Porter of Providence, R.I., John Porter of St Louis, Mo.; Charles Porter of Seattle, Wash., and Alex Porter of Brooklyn, N.Y. A daughter, Anne, predeceased her. She is survived by six grandchildren: Samuel, Elijah, Charlotte, Lucy, Sadie and Clementine. A memorial service will be held at 11 a.m. on October 8th, at South Church, Portsmouth, New Hampshire.