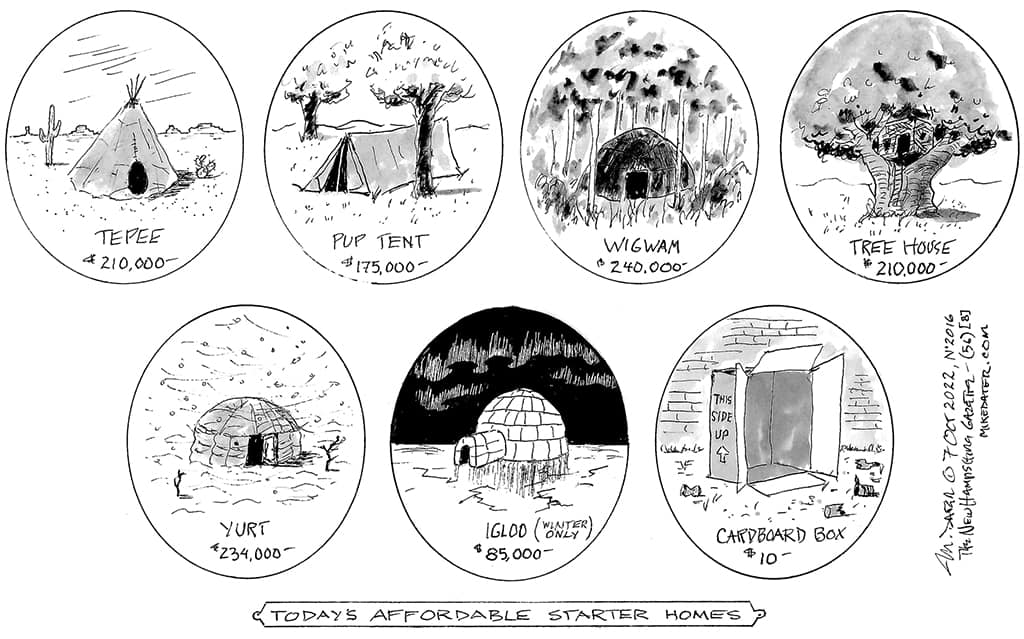 In 1934, a cabal of leading U.S. businessmen tried to enlist U.S.M.C. Major General Smedley D. Butler in a plot to assemble a corps of disgruntled veterans of World War I and lead them in an effort to overthrow President Franklin Delano Roosevelt. The plutocrats involved included J.P. Morgan Jr., General Motors head Alfred P. Sloan, and Irénée du Pont, ex-president of DuPont.

Rather than become a traitor, Butler blew the whistle. Congress investigated. Butler’s story held up. The press, unwilling to challenge the powers-that-were, then let the story drop.

From time to time, some have suggested that Prescott Bush—Father of President George Herbert [Hoover] Walker Bush, grandfather of George W.[MD] Bush—was a member of that cabal. It’s not hard to understand why. Prescott Bush has long been suspected of having opened Geronimo’s grave, stolen his skull, and put it on display in a glass case at “The Tomb,” the windowless home of the Yale secret society known as Skull and Bones.

Following up on our previous work regarding the Bushes, we publish here an excerpt from an interview Democracy Now! conducted with Jonathan Katz, author of Gangsters of Capitalism: Smedley Butler, the Marines, and the Making and Breaking of America’s Empire. Speaking with Juan Gonzalez, Katz clarified the matter, and exonerated Bush—in a manner of speaking.

Juan González: And, Jonathan, didn’t [U.S.M.C. Major General Smedley] Butler also claim, in addition to these corporate leaders, that there were folks like Prescott Bush involved in this, the father of George Herbert Walker Bush and grandfather of George W. Bush?

Jonathan Katz: So, there’s actually a kind of a game of broken telephone going on with his name being involved in this. So, Bush was actually—Prescott Bush was actually too much involved with the actual Nazi Party in Germany to be involved with the business plot. Bush was a partner at Brown Brothers Harriman, which is still a major investment bank based in New York, across the street from Zuccotti Park, their headquarters. And Bush was the—Brown Brothers Harriman was the subject of a different investigation by the same congressional committee, because that committee’s ambit was to investigate all forms of sort of fascist influence and all attempts to subvert American democracy. And because Brown Brothers was part of a separate investigation, they end up sort of in the same folder at the National Archives, and then it ends up sort of getting mixed up in a documentary that came out about 10 years ago. So that’s actually a misunderstanding. Butler never brought up Prescott Bush’s name. But it was because Prescott Bush was too involved with the actual Nazis to be involved with something that was so homegrown as the business plot.

An analysis published Tuesday shows that the top executives of the largest corporations in the United States have seen their pay soar by nearly 1,500 percent over the past 43 years, helping to fuel a massive surge in inequality as workers’ wages lag.

Between 1978 and 2021, according to new research from the Economic Policy Institute (EPI), CEO compensation at the 350 largest publicly traded U.S. companies rose by an inflation-adjusted 1,460 percent, far outstripping the 18.1 percent pay increase that the nation’s typical worker saw during that period.

The trend of soaring CEO pay has continued during the coronavirus pandemic, which caused mass economic chaos and job loss among ordinary workers. EPI found that “while millions lost jobs in the first year of the pandemic and suffered real wage declines due to inflation in the second year, CEOs’ realized compensation jumped 30.3 percent between 2019 and 2021.”

“Typical worker compensation among those who remained employed rose 3.9 percent over the same time span,” note EPI’s Josh Bivens and Jori Kandra, the authors of the new report.

Federal Reserve Chair Jerome Powell has been forthright about the primary goals of rate hikes: A weaker labor market and lower wages. According to the Fed’s own projections, rate increases could throw around 1.5 million people in the U.S. out of work by the end of next year.

“What we hope to achieve is a period of growth below trend which will cause the labor market to get back into better balance and that will bring wages back down to levels that are more consistent with 2 percent inflation over time,” Powell said last month.

When Powell voices his desire to “get wages down”—as he did during a May press conference—he’s not referring to the skyrocketing pay of top corporate executives or Wall Street bankers, who have seen their bonuses surge by 1,743 percent since 1985. As The Lever’s Matthew Cunningham-Cook reported earlier this year, Powell’s Fed has “declined to implement a law to reduce the skyrocketing paychecks of his former colleagues on Wall Street.”

Bivens and Kandra write in their new analysis that the chief executive pay surge in recent decades is not the “result of a competitive market for talent but rather reflect[s] the power of CEOs to extract concessions.”

In 2021, the CEOs of top U.S. companies raked in nearly 400 times more pay than the typical worker.

To begin reversing out-of-control CEO pay and bolstering wage growth among ordinary workers, EPI recommends “implementing higher marginal income tax rates at the very top,” which “would limit rent-seeking behavior and reduce the incentives for executives to push for such high pay.”

“Another option,” Bivens and Kandra write, “is to set corporate tax rates higher for firms that have higher ratios of CEO-to-worker compensation,” an idea proposed by Sen. Bernie Sanders (I-Vt.) in his 2021 Tax Excessive CEO Pay Act.

The bill, which garnered just three co-sponsors in the Senate and 22 in the House, never received a vote.

This article is republished from Common Dreams under a Creative Commons license.

The satirical newspaper The Onion on Monday filed an amicus brief mixing humor with legal arguments in support of an Ohio man who was briefly jailed over a parody Facebook page mocking his local police department.

“Americans can be put in jail for poking fun at the government? This was a surprise to America’s Finest News Source.”

The filing says The Onion—”the world’s leading news publication”—submitted the brief “to protect its continued ability to create fiction that may ultimately merge into reality. As the globe’s premier parodists, The Onion’s writers also have a self-serving interest in preventing political authorities from imprisoning humorists.”

In 2016, police in Parma, Ohio arrested and jailed Anthony Novak after he created a Facebook page resembling the local police department’s own page on the social network.

According to the Associated Press, Novak’s posts included a hiring announcement “strongly encouraging minorities to not apply” and a fake event where any convicted pedophile could be “removed from the sex offender registry and accepted as an honorary police officer.”

Novak was charged with one felony count of disrupting public services but was acquitted at trial. He subsequently sued, alleging violations of his constitutional rights. However, the 6th U.S. Circuit Court of Appeals dismissed Novak’s suit by granting Parma police officers qualified immunity, a legal doctrine broadly shielding cops and other government officials from civil lawsuits.

“Americans can be put in jail for poking fun at the government? This was a surprise to America’s Finest News Source and an uncomfortable learning experience for its editorial team,” the brief states. “Indeed, ‘Ohio Police Officers Arrest, Prosecute Man Who Made Fun of Them on Facebook’ might sound like a headline ripped from the front pages of The Onion—albeit one that’s considerably less amusing because its subjects are real.”

“The 6th Circuit’s ruling imperils an ancient form of discourse,” the brief asserts. “The court’s decision suggests that parodists are in the clear only if they pop the balloon in advance by warning their audience that their parody is not true.”

“But some forms of comedy don’t work unless the comedian is able to tell the joke with a straight face,” the document continues. “Parody is the quintessential example. Parodists intentionally inhabit the rhetorical form of their target in order to exaggerate or implode it—and by doing so demonstrate the target’s illogic or absurdity.”

• Parody functions by tricking people into thinking that it’s real;

• Because parody mimics the “real thing,” it has the unique capacity to criticize the real thing;

• A reasonable reader does not need a disclaimer to know that parody is parody; and

• It should be obvious that parodists cannot be prosecuted for telling a joke with a straight face.

“The Onion cannot stand idly by in the face of a ruling that threatens to disembowel a form of rhetoric that has existed for millennia, that is particularly potent in the realm of political debate, and that, purely incidentally, forms the basis of The Onion’s writers’ paychecks,” the filing asserts.

“The Onion intends to continue its socially valuable role bringing the disinfectant of sunlight into the halls of power,” the brief adds. “And it would vastly prefer that sunlight not to be measured out to its writers in 15-minute increments in an exercise yard.”

This article is republished from Common Dreams under a Creative Commons license.

This year’s program promises to be exciting, informative, and particularly relevant to this moment. The theme “Where the Money Resides: An Exploration of Racialized Access & Historic Exclusion from Wealth” will review the legal framework that supported institutional practices that were barriers to wealth for non-whites. The conference will celebrate the success stories of both individuals and institutions that serve as beacons of hope for current generations and much more.

The awards dinner on Friday night will feature conversation with keynote presenter Ibram X. Kendi, one of America’s foremost historians and leading antiracist scholars. Joining him will be Dr. Reginald Wilburn.

Conference panels will include:

• The Rise and Fall of Enslaved and Free Black Affluence

• By Degree: Laws & Systemic Barriers to the Acquisition of Wealth

• The Myth of Black Exceptionalism: Paths to Black Economic Power

Marcia Jebb died suddenly on April 22, 2022 while recovering from knee surgery. Born in Manchester, N.H. to Thomas and Blanche (Stillson) Jebb, she graduated from Colby College, received a Masters Degree from George Washington University, and an MLS from Simmons College. She went to France on a Fulbright scholarship and earned a diplôme from Université de Lyons.

Marcia spent most of her professional career in Ithaca and retired from her position of Librarian at Cornell University. She returned to the seacoast and wove into the fabric of Portsmouth. She was a founding member of the Black Heritage Trail, worked part time at the Athenaeum, and offered her exemplary editing skills proofreading various publications, most notably the New Hampshire Gazette.

Marcia never saw a need to learn to drive, and her relationship with automobiles was always somewhat skeptical. And yet this never kept her from doing exactly what she wanted to do. When her mother was in a nursing home in Western Massachusetts, Marcia took a taxi to go see her.

Marcia was witty, wry, and incredibly well read. She loved music, the opera, old movies, the theatre, and cats. She was a good friend and is sorely missed.