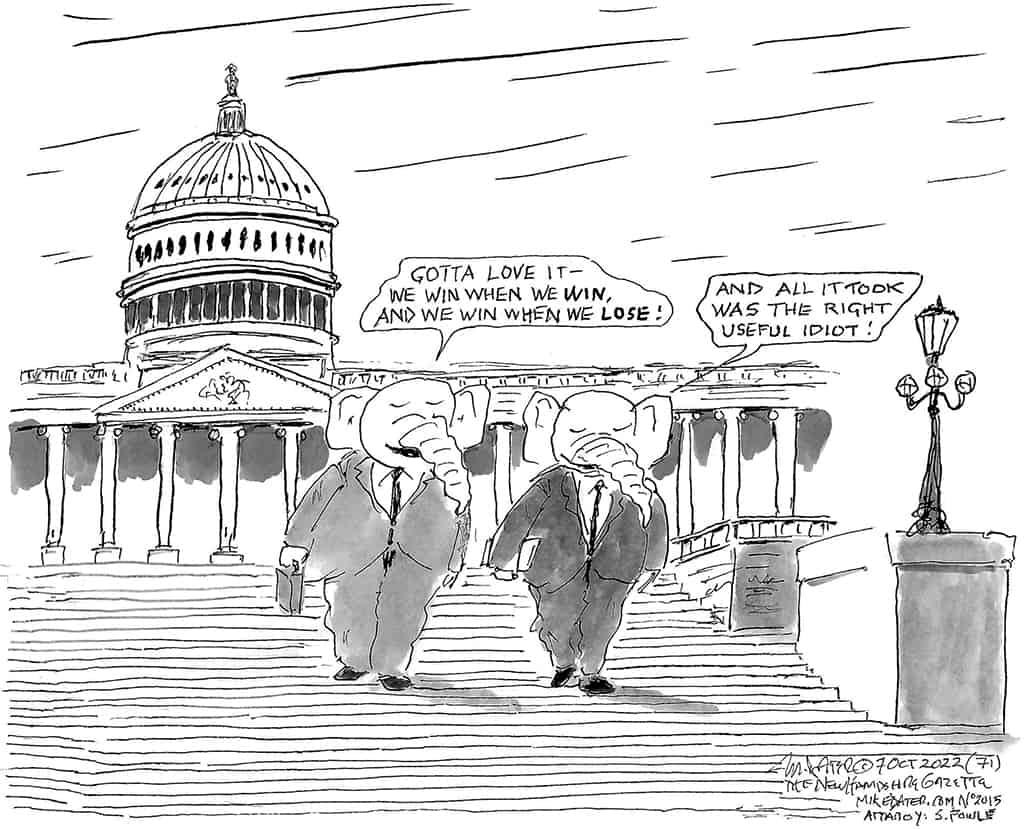 What a great time to be alive—assuming, of course, that you’re a Republican.

But, then, of course you are. Aren’t we all? Isn’t everybody?

Why wouldn’t you be a Republican? What are you, then? A criminal? An alien? Some kind of Godless, alien, criminal, drug-pushing, baby-blood drinking lizard person? Well, we should hope not.

There, now that that’s settled, let us rejoice in our good fortune—which is, of course, a sign of God’s favor. He is, after all, a Republican, right?

Of course God is a Republican. If He—that is His pronoun, by the way. We asked Him, and He answered—were not a Republican, why would he have favored our Party with so many natural advantages?

This point was settled once and for all when John Winthrop, 2nd, 6th, 9th, and 12th Governor of the Massachusetts Bay Colony, observed: “God Almighty in his most holy and wise providence hath so disposed of the condition of mankind, as in all times some must be rich some poor, some high and eminent in power and dignity; others mean and in subjection.”

We’ve got the money, so we should have the power. It is a point so simple that only a Democrat could fail to see it.

Enough, though, of this remedial history. Let us return to, and revel in, this joyous moment—for we may be on the cusp of our apotheosis. Not in the theological sense, of course. It would be heresy to suggest that we are about to become gods. We are, however, on a path which promises to elevate our Party to a position of unassailable power.

Let us briefly count our blessings, taking it from the top. Twice in recent times we have won the Presidency, despite the inconvenient fact that the other party’s candidate actually received more votes. Thus did the Lord—with a little help from Roger Stone and a couple dozen long-dead slaveholders—display his almighty disdain for that pernicious doctrine known as “democracy.”

As we turn our attention to the legislative arena, those slaveholders once again raise their mouldering, bewigged heads. A bit creepy, yes—but oh, so useful. By insisting on the right of states to mistreat people as they please, they made it possible for a minority of citizens to control the upper house of Congress.

Republicans have controlled the Senate more than half the time since 1996, yet in all that time they have never won more than half the votes cast for Senate seats. Nor have they represented, in that time, more than half of Americans. Cool, huh? Clear sign of God’s favor, wouldn’t you say? How else would you account for it?

Not that you need a majority in the Senate, anyway. As long as Democrats let us—which will apparently be forever—we don’t even have to be in control to prevent the Senate from doing anything.

Which is to say—though we never would do so out loud—that we’re in control without being in control. And if you don’t think we’re out of control, well, you just haven’t been paying attention.

Now, we have been accused of wanting to shut the government down entirely. Such mistaken impressions are understandable.

For one thing, we threaten to do it all the time, and we’ve followed through on multiple occasions. Also, there’s Grover Norquist, who, for a reasonable fee, will utter his famous catch phrase, “I’m not in favor of abolishing the government. I just want to shrink it down to the size where we can drown it in the bathtub.” *

The courts are the lynchpin—we use the term advisedly, with the emphasis on the first syllable—of our plot to achieve world domination. [We’re trusting you, dear reader, not to go blabbing this about. Some folks might react inappropriately. – The Ed.]

Since we, the favored, are relatively few, and they, the great unwashed mob, are many, it takes a certain amount of finesse to fool them into putting up with us. This has always been true, and it is about to become more so.

We have been quietly increasing the disadvantages of being a wage slave for decades now, and some of them are beginning the feel the pinch.

Just as a baseline, there’s the divergence between productivity and wages. productivity has risen steadily, while wages have been flat. Where, then, did the money go? Into your pocket as profit, silly! Add to that the cost of Wall Street bailouts—which Wall Streeters are now using to buy up all the homes they lost due to sketchy mortgage flim-flams—and you can see why some sore losers might be a little upset.

This is one reason why it is so important to keep people working as many hours as sub-humanly possible. If they were given time to think—may God forbid—they might start actually thinking.

If there were no government at all, people living under such conditions might take it upon themselves to create a government. Then where would we be? Do you honestly think we’d get another chance to set ourselves up as well as this?

Now we begin to see how all these disparate parts gracefully come together. Can’t you see them moving to the music of the spheres?

First unleash a vulgar, jabbering, be-suited knuckle-dragger—a sort of anti-mime unable to shut up—to distract the press and public. Whatever time he has off-camera, let him spend it rubber-stamping judgeships—all candidates, naturally, pre-screened by our in-house priesthood to assure faithful adherence to the gospel as we see it.

Then let the Senate go on strike and refuse to do anything except pack the courts with these faith-based puppets.

Finally, the last step, right around the corner: let the unassailable, unelected Supreme Court rule that gerrymandered state legislatures have the sole right to determine who can vote.

* Norquist is further proof that God bestows his favors primarily upon the worthy. Born to disadvantage—eldest son of a Polaroid vice president; Harvard education—he could hardly claim the sacred mantle of being “a self-made man.” Through bold entrepreneurship, though, he has made a good living as an anti-tax attack dog.