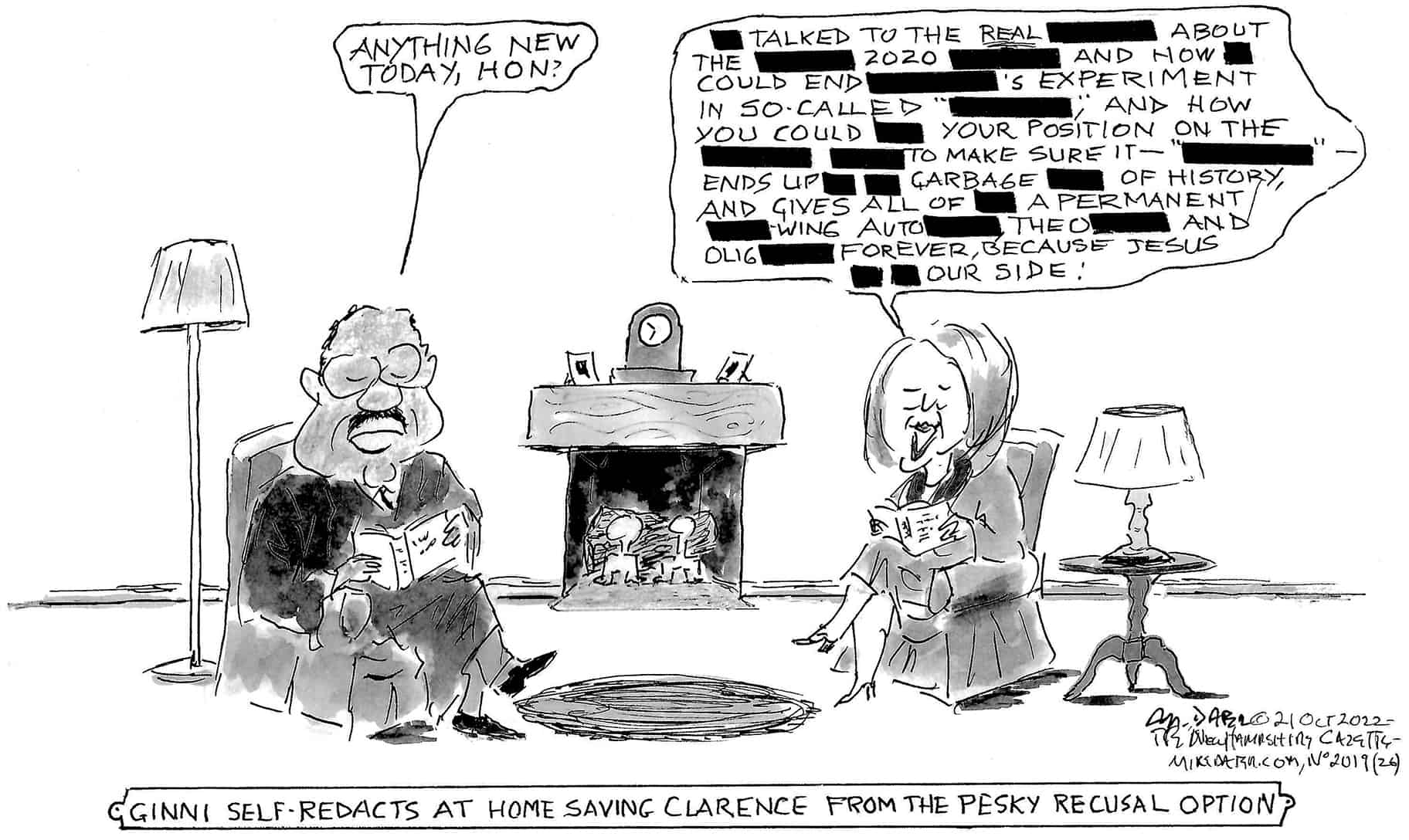 Corporate media outlets are mostly ignoring a Republican ploy to use the debt ceiling fight to gut Social Security and Medicare if the GOP regains control of Congress—a plot that one leading watchdog called “perhaps the single most consequential story” of the midterm elections.

“Social Security and Medicare are on the ballot next month,” said Media Matters for America senior fellow Matt Gertz. “If the American public doesn’t know that, it’s in part because the press isn’t telling them.”

Common Dreams reported last week that Social Security and Medicare defenders are warning that the popular programs—which each serve tens of millions of older Americans—face “grave danger” in the event Republicans retake control of Congress in January.

The warning came after four House Republicans hoping to chair the lower chamber’s budget committee told Bloomberg Government that “Social Security and Medicare eligibility changes, spending caps, and safety-net work requirements are among the top priorities” if the GOP is back in charge.

The Republican lawmakers indicated in the article that “next year’s deadline to raise or suspend the debt ceiling is a point of leverage” to force Democrats to allow policies including raising the retirement age and slashing Social Security and veterans’ benefits, in keeping with the GOP’s recently adopted policy agenda.

Despite congressional Democrats sounding the alarm on what Rep. Don Beyer (D-Va.) said would be an “economically catastrophic” policy, “there’s been virtually no coverage from major TV news shows, newspapers, and other mainstream outlets,” Gertz noted.

“There has been shockingly little coverage of this development given its significance,” Gertz continued. “It earned a scattering of mentions in publications including New York magazine. And Sen. Elizabeth Warren (D-Mass.) and MSNBC’s Chris Hayes detailed the stakes on his show Wednesday night.”

“But the story hasn’t been referenced elsewhere this week on MSNBC, or on CNN, or on Fox News,” he added. “The nationally broadcast morning and evening news shows on ABC, CBS, and NBC haven’t discussed it. It hasn’t been mentioned in the pages of major newspapers, including The New York Times, The Washington Post, The Wall Street Journal, the Los Angeles Times, and USA Today.”

Postmaster General Louis DeJoy is facing backlash over his newly announced plan to hike postcard and stamp prices as part of his proposed 10-year overhaul of mail operations, a strategy that critics warn will further damage the Postal Service.

Late last week, the USPS notified the Postal Regulatory Commission (PRC) of its planned price increases, which are set to take effect in January. Under the new pricing proposal, which must be approved by the PRC, the cost of a stamp would rise 4.2 percent to 63 cents while the cost of a postcard would jump 9 percent to 48 cents.

The Postal Service cited the need to “offset the rise in inflation” in justifying the price hikes, but Government Executive’s Eric Katz pointed out Tuesday that “DeJoy has previously suggested the increases would continue to allow the Postal Service to reach a financial break-even point.”

Why a federal agency would need to reach “break-even” is a question that observers have asked for months as DeJoy——a former logistics executive and Trump megadonor—has rushed ahead with pricing changes, job cuts, and postal facility closures in a purported attempt to make the public USPS “profitable.”

DeJoy has told consumers and the mailing industry to expect USPS prices to continue rising “at an uncomfortable rate” for the foreseeable future as the postmaster general vows to remain in his position despite sustained calls for his removal. The Postal Service Board of Governors, which has the authority to oust DeJoy, approved the new price increase.

Kevin Yoder, a former GOP congressman and executive director of Keep US Posted—an alliance of consumer and business groups—warned in a statement Tuesday that “if DeJoy’s frequent postage hikes are allowed to take place, Americans could soon be paying well over $1 to mail a single letter.”

“The January 2023 rate increases will impact every American, as well as industries that depend on the mail to serve the public,” said Yoder. “In fact, with July’s increase this year, newspapers faced a 9 percent postage increase, and nonprofits’ mail costs increased more than 6 percent. We can’t let the Postal Service sabotage itself by driving industries out of business and driving consumers away from using the mail.”

“It’s a relief to see Congress step in with H.R. 8781 to ensure that mail service remains accessible to all,” Yoder added.

H.R. 8781 is Rep. Gerry Connolly’s (D-Va.) recently introduced Ensuring Accurate Postal Rates Act, a bill that would require a reassessment of the authority DeJoy has used to hike prices significantly during his scandal-plagued tenure as postmaster general.

“We must ensure that rate hikes do not return the Postal Service to a service of the privileged,” Connolly said during a hearing last month.

DeJoy’s latest pricing announcement came a day after a federal judge ruled that the postmaster general’s cost-cutting measures—including limits to overtime pay and a ban on late delivery trips—were to blame for alarming mail slowdowns ahead of the 2020 presidential election.

“There were already enough reasons to fire Postmaster General DeJoy, but this court ruling that DeJoy’s actions in 2020 affected mail service is yet another reason,” Noah Bookbinder, president of Citizens for Responsibility and Ethics in Washington, wrote in response to the decision.

“DeJoy’s conflicts of interest and attacks on a basic government function mean he has to go,” Bookbinder added.

With new polling showing that Republicans have gained a significant advantage in the upcoming midterm elections, progressives on Monday said Democrats must spend the next three weeks laser-focused on the U.S. economy and their plans to end price-gouging and rein in corporate power to help working people.

“This poll should be a wake-up call for our party,” said Rep. Ro Khanna (D-Calif.).

Independent voters particularly have swung toward Republican candidates, with 51 percent now saying they would support a Republican. In September, Democrats had a three-point lead with independents.

Despite widespread outrage over the right-wing majority of the U.S. Supreme Court’s June ruling which overturned Roe v. Wade and paved the way for at least 13 states to outlaw abortion care, women who identify as independent voters showed the largest shift toward Republicans in the past month. They favored Democrats by 14 points in September, and now they support Republicans by a margin of 18 points.

The newest poll data was gathered between October 9th and 12th, with 792 likely voters responding.

While President Joe Biden has recently unveiled policies that have the support of a majority of Americans, including his decisions to pardon people with federal marijuana possession offenses and to cancel some student debt for certain borrowers, voters reported that they plan to make their decisions in November based on the rising cost of living and inflation.

In July, 36 percent of likely voters said economic concerns were primarily guiding them to support or oppose candidates, compared with 44 percent now. Respondents who were focused on the economy were more than twice as likely to support Republicans than Democrats.

As Democratic leaders, candidates, and strategists review the data, Khanna said, they must consider progressive lawmakers’ recent push “for a sharper and stronger economic message.”

Earlier this month, Khanna introduced his New Economic Patriotism Plan, which would push the federal government to support American-made products and materials and which could help address the current supply chain crisis.

Khanna and other progressives have also spoken out about price gouging by powerful oil companies that have raked in over $100 billion in profits so far this year—lavishing the money on shareholders and executives while working people struggle to afford fuel on top of groceries, housing, and other essentials.

“Giant corporations are using inflation as a cover story to jack up prices and pad profits,” said Sen. Elizabeth Warren (D-Mass.) earlier this year as she introduced legislation to empower federal regulators to stop companies from price-gouging.

Those proposals are among the subjects Democrats should be focusing on as early voting gets underway across the country, said progressives on Monday.

“Democrats should close the election with a clear argument about who is prepared to fight for the working class,” said Mike Casca, director of communications for Sen. Bernie Sanders (I-Vt.).

While Democrats have unveiled proposals to stand up to wealthy corporations in recent months, Republicans have pushed plans to raise taxes on low income households and weaken government programs relied on by millions of senior citizens including Medicare and Social Security.

On Monday, The Washington Post reported that one of the top priorities for Republicans if they retake control of Congress would be to make permanent portions of the Trump tax cuts that overwhelmingly benefited the rich and corporations.

Warren Gunnels, an adviser to Sanders, pointed to a recent report by the pro-worker media organization More Perfect Union which showed that a promise to provide direct cash benefits similar to the expanded child tax credit—which Republicans flatly opposed continuing this year despite the fact that it cut childhood poverty by 30 percent and helped millions of families to afford necessities—was found to be “the most popular campaign message” a candidate could have.

Sanders has pushed Democrats in recent days to communicate clearly with voters about the danger Republicans pose to working Americans’ finances and how the Democratic Party has worked to help the middle and lower class.

“I think they should contrast their views with the Republican positions,” Sanders told NBC News on Sunday, repeating his argument from an earlier opinion piece in The Guardian. “I believe, and most Democrats believe, that at a time when half our people are living paycheck to paycheck, we should raise the minimum wage to a living wage. No Republicans support that. I think we should make it easier for workers to join unions. Republicans don’t support that.”

“You can’t cede the economic argument to folks who say the answer is to give corporations and the wealthy more money,” he said.

— Subscriptions Can Be Had —

Our Business (Such as it Is) Manager pointed out to the alleged editor recently that our website was in error. A notice, placed in a fairly prominent location, dating from the period when we had suspended mailing operations due to the prevailing plague, had still not been removed.

In other words, we were warning people that mailed subscriptions were not available. Not exactly a winning strategy.

That problem was quickly resolved: the notice has been removed. We’re just following up here to let our readers know that—barring future catastrophes, which can never be ruled out in our increasingly dysfunctional society—mailed subscriptions are indeed available.

In fact (knock wood) all systems are go here. We were recently able to add a volunteer to our Subscription Fullfillment Department, aka the Origami Crew, by the simple expedient of placing a small ad right here in the pages of our own paper.

As our Fortnightly Rant intimates, the future is always uncertain. Until we are prevented, though, it’s our intention to continue.