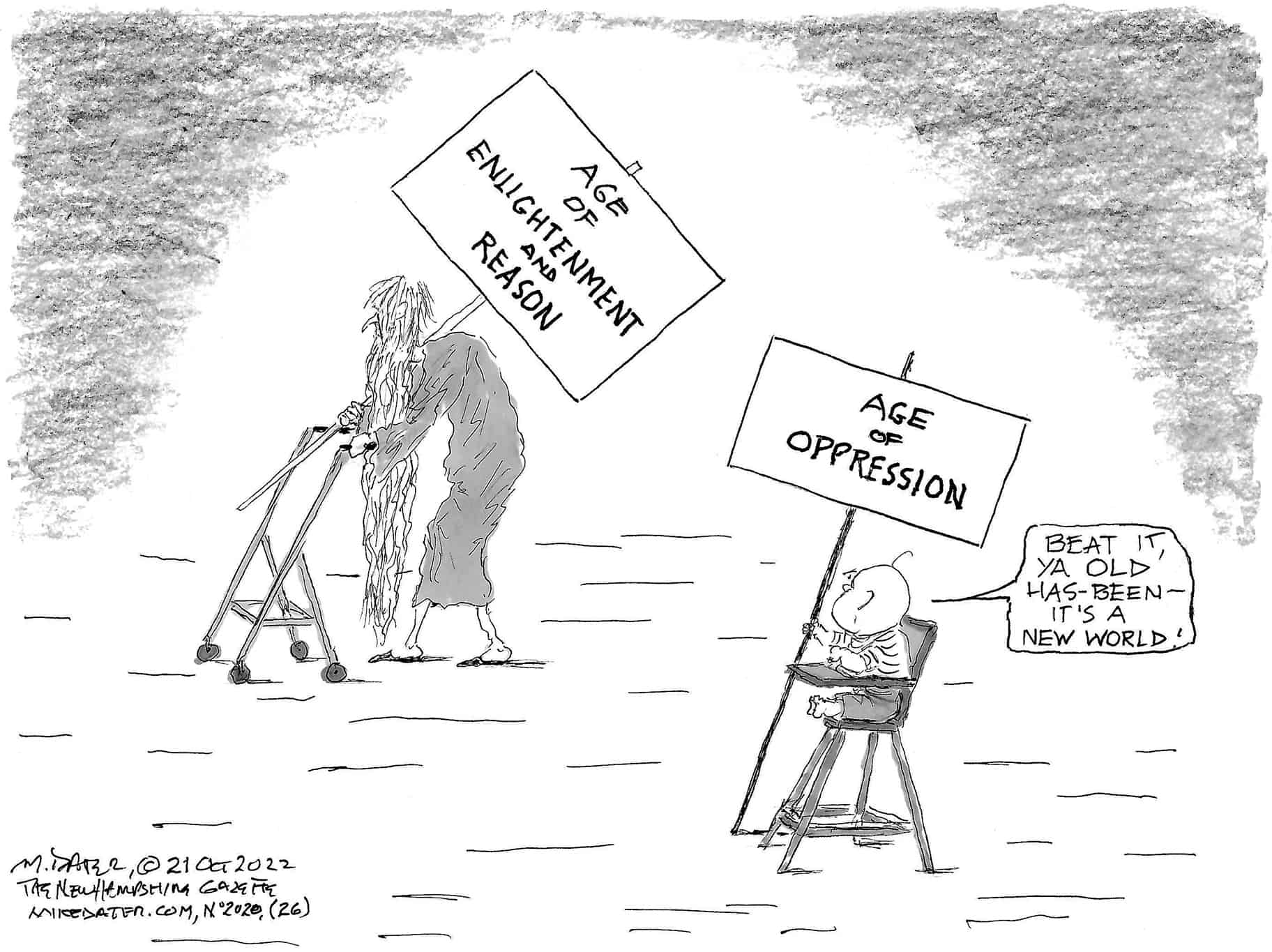 Time is the essence—the very foundation—of the news racket. Just think: were it not for time, when would things happen? And if nothing ever happened, what would journalists write about?

We suppose that such thoughts must occur from time to time to those who toil in other news organizations. Perhaps, though, with their frenzied schedules—weeklies, for example, or, in extreme cases, dailies—they simply don’t have time.

Thanks to our fortnightly schedule, our national seniority, and the recent commencement of our 267th volume, we have the time, the license, and, we believe, the responsibility to always keep such considerations in our thoughts. Having thus defended the admittedly broad parameters of our discussion, let us focus our attention on this particular moment.

In less than three weeks, every member of the House of Representatives, one-third of the Senate, and a host of statewide election officials will be up for election.

This governing structure is dictated for us by the Constitution of the United States of America. In effect since 1789, it is generally considered to be the oldest national constitution currently in force.

Some say that’s a good thing. We’re not so sure. Thanks to a quirk in U.S. voting practices,* though—which is not even mentioned in the Constitution—we’re stuck with the damn thing as it is, for the forseeable future, whether we like it or not. Because why would Republicans ever allow alterations to a system that gives them such an unfair advantage?

Despite its blatant and egregious gerrymandering—duly approved by a panel of superannuated religious fanatics—the House of Representatives might be said, on occasion, to actually represent the people. The Senate, on the other hand, represent dirt—or, if you prefer, land. Land stolen, for the most part, from its original occupants.

Setting this pedantic nit-picking aside, let’s ask a simple question: if this is such a great democracy, why can’t the people have what they want?

Poll after poll has shown that Americans want universal background checks for firearm purchases, stronger environmental protections, lower drug prices, and on and on—none of which they’re going to get, the way that things have been going. The smart money would bet they’ll get the opposite.

Researchers at Princeton did an analysis some years ago comparing Congressional legislation with popular wishes. They learned that “an idea that nobody supports—literally nobody—has about a 30 percent chance of becoming federal law.” At the same time, an idea that is incredibly popular—among the bottom 90 percent of Americans in terms of income—also has about a 30 percent chance of becoming law.

In other words, “the preferences of the average American appeared to have only a minuscule—near zero, statistically nonsignificant—impact upon public policy.”

What legislation does get passed? Legislation that’s supported by the top ten percent—those who can afford to hire lobbyists.

This is unfortunate for a number of reasons. Not only is the “the general Welfare”—which was prominently featured in our Declaration of Independence—being ignored—our very survival is increasingly at risk.

Regardless of anything humanity does now, bad trouble is already coming our way. Every year, storms, droughts, fires, floods, and heat waves bring further proof: if we keep pumping carbon into the atmosphere the way we have been, the result will be chaos.

And that’s just the atmosphere. The biosphere’s in trouble, too. The World Wildlife fund says “69 percent of the world’s wildlife populations—bird, mammal, fish, reptile and amphibian—have dropped since 1970.” Scientists are assessing the liklihood of a sixth mass extinction.

If humanity acts now, we can at least hope to reduce the damage and suffering. As the world’s most powerful nation—and biggest polluter—the U.S. has a moral obligation to provide essential leadership.

Congress is leading, of that there can be no doubt; it leads simply by existing. The problem is, as noted above, it’s listening to the wrong people—people who are trying to kill us.

No, wait. That is overwrought. Let us re-phrase that.

These people—who are filthy rich already or they wouldn’t have been able to buy Congress in the first place—want to get even filthier rich than they already are. And, as we have seen, thanks to the way our electoral system “works” these days, a compliant Congress is eager to help them get what they want, regardless of the consequences. Even though that will eventually kill us.

Well, that does this all mean?

Will we never learn how Rings of Power ends?

As we said at the beginning, we’re always thinking about time. So, when NHPR recently re-broadcast a 2016 episode of Radiolab, we were all agog.

We’ll summarize: life on Earth began about four billion years ago, in the form of simple bacterium. For two billion years, nothing changed, until a single bacterium merged with an archaeon, and out of that union, mitochondria developed. Mitochondria are tiny, but for their size they carry a powerful electrical charge. Suddenly life could get bigger and more complex.

Two billion years later, one species became so complex and smart that it was able to figure all this out.

And yet, a person who is unable to construct a simple sentence could, if he gets into the Senate, end up paralyzing the U.S. government and spelling our collective doom.

* “In political science, Duverger’s law holds that single-ballot majoritarian elections with single-member districts (such as first past the post) tend to favor a two-party system. The discovery of this tendency is attributed to Maurice Duverger, a French sociologist who observed the effect and recorded it in several papers published in the 1950s and 1960s. In the course of further research, other political scientists began calling the effect a ‘law’ or principle.” – Wikipedia