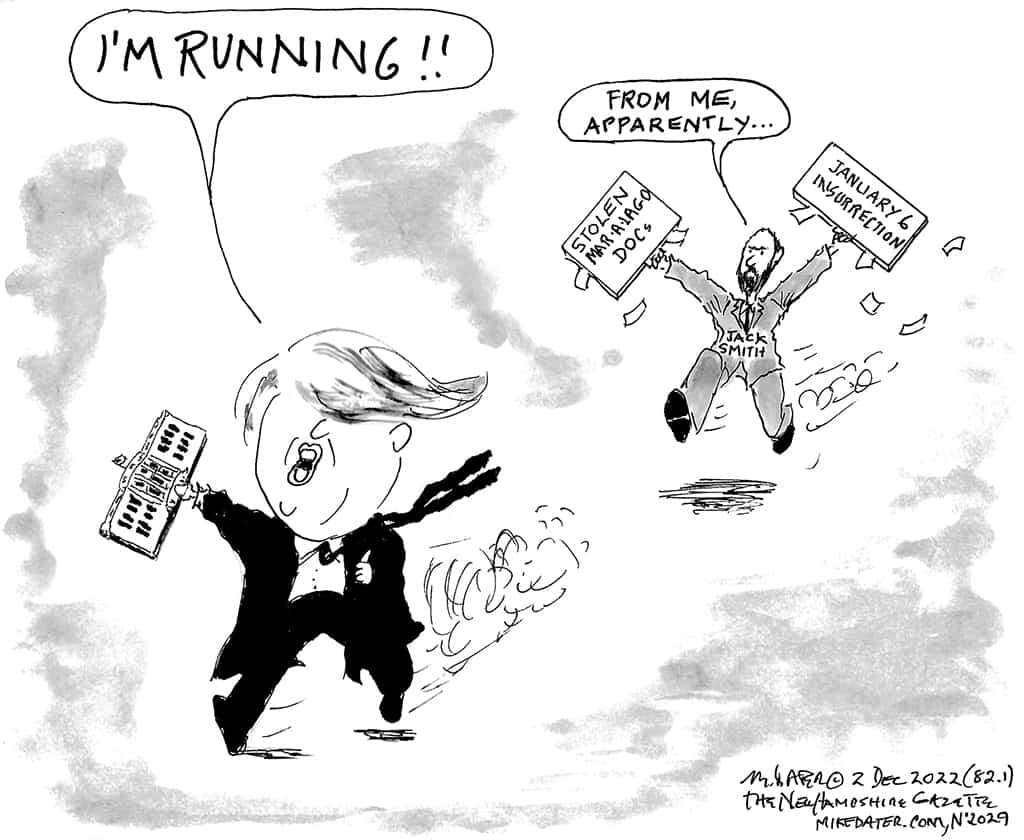 Charles “Sparky” Schultz, whose 100th birthday was recently celebrated, was a mensch with remarkable talents. Never what you would call a flashy draftsman, he was able nevertheless to draw humor out of the unlikely raw material of existential dread, using children as his medium.

Perhaps the most lasting image he inserted into our national imaginarium was that of Charlie Brown lying flat on his back after trying to kick a football which has been whisked away at the last moment by Lucy van Pelt.

Charlie Brown’s chagrin is compounded annually. He knows he’s been through all this before. Maybe he’s smarter than Congressional Democrats. We’ll soon see.

Democrats will hold the House through the end of this month. Then Republicans will take over in January.

Once Nancy Pelosi has been routed from the Speaker’s rostrum, and her place is taken by Kevin McCarthy—whose strings are held in turn by the likes of Marjorie Taylor Greene—they threaten to do what they always threaten to do: slash Social Security and Medicare, in the name of fiscal prudence.

To gain Democratic support for this phase of the class war, they’ll use a strategy pioneered by the National Lampoon: “Buy this magazine or we’ll shoot this dog.”

By refusing to permit an increase in the nation’s artificial and arbitrary debt limit—a unique construct, we’ve been led to understand, which is not found in serious industrialized countries—Republicans will, in effect trash the Treasury’s credit rating.

This ploy would be less annoying if there were any meaningful connection between the national debt—jacked up primarily by spending on weapons and Repubican tax breaks for billionaire donors—and our two most effective programs for preventing elderly citizens from starving to death on the sidewalk.

One might think that, after having faced this situation so many times before, Democrats could finally have found some way to spare us from all this drama.

However, they have not. And so, we are forced to sit through yet another rerun of this dusty and shopworn scenario.

It’s all part and parcel of a larger and more generalized failure of Congress to do the will of the people. Yet we live in hope. Our ink-stained fingers are crossed.

By Lew Blank and Zachary Hertz

Throughout 2022, the United States experienced a surge of organizing activity. The labor movement has been electrified by pushes from workers across the country to join together in unions, including employees for Starbucks, Amazon, and Apple.

In a June survey of 2,698 likely voters, Data for Progress tested how Americans are responding to this boom in organizing. We find that when voters cast their ballots in the November 2022 elections, they were more likely to vote for pro-worker candidates. We also find that voters strongly oppose companies’ anti-union tactics and support reforms to make it easier for workers to unionize.

In our survey, conducted prior to the midterm election, we asked voters whether they’d be more likely or less likely to vote for a candidate who supported unions. We find that 53 percent of voters preferred these candidates—including 74 percent of Democrats, a plurality (47 percent) of Independents, and more than a third of Republicans.

Next, we tested broad support for workers’ right to form a union. We asked voters whether they think the decision to join or form a union should be left exclusively to employees, or whether employers should be able to influence workers’ decisions. We find that 73 percent of voters—including strong majorities of Democrats, Independents, and Republicans—think the decision to unionize should be left exclusively to workers, and employers should remain neutral.

Under current law, workers are expected to unionize workplace by workplace. Forming a union across an entire industry—which would allow workers to negotiate for industry-wide wages, benefits, and working conditions—is very difficult.

Voters think this should change. We find that 60 percent of voters—including 77 percent of Democrats, 55 percent of Independents, and a plurality (47 percent) of Republicans—support allowing workers to unionize across their industry.

We also tested support for using our government’s spending power to encourage quality wages and working conditions. We asked voters whether they’d support requiring that any jobs that are financed by the local, state, or federal government meet certain standards: paying a living wage, providing good benefits and working conditions, and allowing workers to form a union.

We find that this proposal is highly popular. Fifty-seven percent of voters—including 64 percent of Democrats, 58 percent of Independents, and 50 percent of Republicans—support requiring that taxpayer funds only go to jobs that meet certain standards.

Finally, we find that voters across party lines do not want employers to interfere with unionization efforts by holding mandatory anti-union meetings. Sixty-nine percent of voters—including 75 percent of Democrats, 65 percent of Independents, and 66 percent of Republicans—say that workers should not be required to attend mandatory meetings where the company talks about its opposition to unionization.

We also tested voter support for two reforms that would limit employers’ ability to force workers to attend anti-union meetings.

First, we find overwhelming voter support for new legislation that would allow workers to opt out of anti-union meetings—including more than two-thirds of Democrats, Independents, and Republicans.

Broadly, these findings show that as workers across the country organize to form unions, voters across party lines have their backs. Democrats, Independents, and Republicans oppose anti-union tactics like mandatory meetings, and support pro-union reforms, such as allowing workers to unionize across their industry and only providing taxpayer funds to jobs that meet certain standards. We also find that supporting workers and adopting pro-union stances is a strong electoral strategy that helped candidates win in the November 2022 midterms.

Lew Blank and Zachary Hertz are polling analysts at DataforProgress.org, where this article was published on November 21st. It is published here under Creative Commons license.

Before the deaths of George Floyd, Breonna Taylor, Philando Castile and Sandra Bland were propelled into the media spotlight, their names were Twitter #hashtags.

In 2020, Twitter was essential to the spread of historic Black Lives Matter protests against police brutality across the world.

But Elon Musk’s takeover of Twitter has thrown the future of Black Twitter into question. Social media users argue that the takeover has already had an impact on the Black social media community.

For instance, not only do multiple sources report an almost immediate spike in the use of the N-word, but Musk has also allegedly mocked Black Lives Matter in general and the group’s apparel found at Twitter’s headquarters in San Francisco, California.

The impact of Musk’s takeover is so abundantly clear that Black Twitter held its own satire-infused funeral.

User tweets clearly take a humorous approach, a well-documented coping technique for the Black community. But as a Black professor who studies communication and police brutality, I am petrified when I envision the implications of Black Twitter’s demise.

It starts with a hashtag

A world without Black Twitter is a world void of robust, rapid and authentic information sharing on police brutality within the Black community. As a result, it is my belief that the community will be systemically silenced and exposed to increased levels of police-related violence.

Black Twitter refers to the digital community within Twitter that embraces and celebrates Blackness all while circulating topics, stories and images that directly relate to and affect the Black community. Black Twitter is not defined by geography or membership.

Instead, it refers to a culture and community co-created by Black Twitter members. Black Twitter is used to offer cultural critiques, and to discuss significant historical moments.

Pew Research has found African Americans who use Twitter are twice as likely (68 percent) to discuss issues of race online compared with their white counterparts (31 percent). In addition, 85 percent of those Black users believe social media to be an important tool in creating sustained social movements.

A 2016 study found that education, amplifying marginalized voices and pushing for structural changes to policing were the main goals for Black Twitter users dedicated to BLM. My dissertation clearly shows that the Black community, especially Black millennials and Gen Zers, use Black Twitter as a primary source of information about police brutality.

I discuss this in greater detail on the Opinion Science Podcast and Emerson College’s Campus On The Common Podcast.

Without Black Twitter, one of the Black community’s main information channels would not exist.

For many social media users, Black Twitter is the first way they hear of stories involving police brutality.

In fact, I have found that hashtags have replaced breaking news headlines for some Black Twitter users.

“Honestly, I hear about most cases on Twitter,” one interviewee told me during my research. “It’s always on Twitter before it becomes main headline news. News will pick it up like a day or two after I’ve already seen it on Twitter.”

On Twitter, a hashtag is no longer just a name. Instead, it often blossoms into awareness campaigns that seek police reform. Hashtags are often the catalysts for mobilization, and this mobilization would be significantly slower in a world without Twitter.

Twitter is often used to document and upload videos of police brutality. For instance, the video of George Floyd’s death in police custody was first publicized on Twitter, and then mainstream news circulated the footage.

I like to think of Black Twitter as the fuel, while mainstream media are the wheels on the information highway.

In my research, several interviewees indicated Twitter is the preferred message channel on police brutality because of its authenticity.

For many, Black Twitter avoids perceived racial biases of mainstream media outlets that rely on police sources for information. Instead, users are exposed to firsthand accounts often filmed by other Black users.

“I find Twitter to be most credible, especially the firsthand accounts and videos,” one interviewee told me. “There is something about seeing videos that makes it more real. There is less time for someone to flip a story.”

Another interviewee echoed similar ideas, stating, “I definitely prefer videos on Twitter over hearsay or the news. I don’t trust the news. But videos serve as solid evidence. I think that’s important because there are lots of cases where people are killed by police and we wouldn’t have any evidence if it weren’t for videos on Twitter.”

For some, like Elon Musk, Twitter may be a digital playground to boost their wealth and magnify their egos. But Black Twitter and the information it provides is literally a matter of life and death.

From Pearl Pearson to Breonna Taylor to Tamir Rice to Philando Castile, the use of Twitter was essential in gathering evidence, gaining public attention and pushing for reforms.

In a world where cameras are always on and information is constantly being shared, police brutality still exists. Imagine what may happen when there are fewer places to make public those images and unvarnished stories.

Deion Scott Hawkins is Assistant Professor of Argumentation & Advocacy at Emerson College. This article was published November 30th at TheConversation.com. It is published here under a Creative Commons license.

We have been eagerly soaking up the glowing reviews of Stacy Schiff’s new biography, The Revolutionary: Samuel Adams, and we are looking forward to reading the book itself when time permits.

Samuel looms large here in The Nation’s Oldest Newsroom.™ This is partly out of respect for his extraordinary merits as a revolutionary, and partly due to a direct connection.

For about a year and a half, beginning in 1749, Adams was the driving editorial force behind a newspaper called the Independent Advertiser. It was printed and published by the partnership of Gamaliel Rogers and Daniel Fowle.