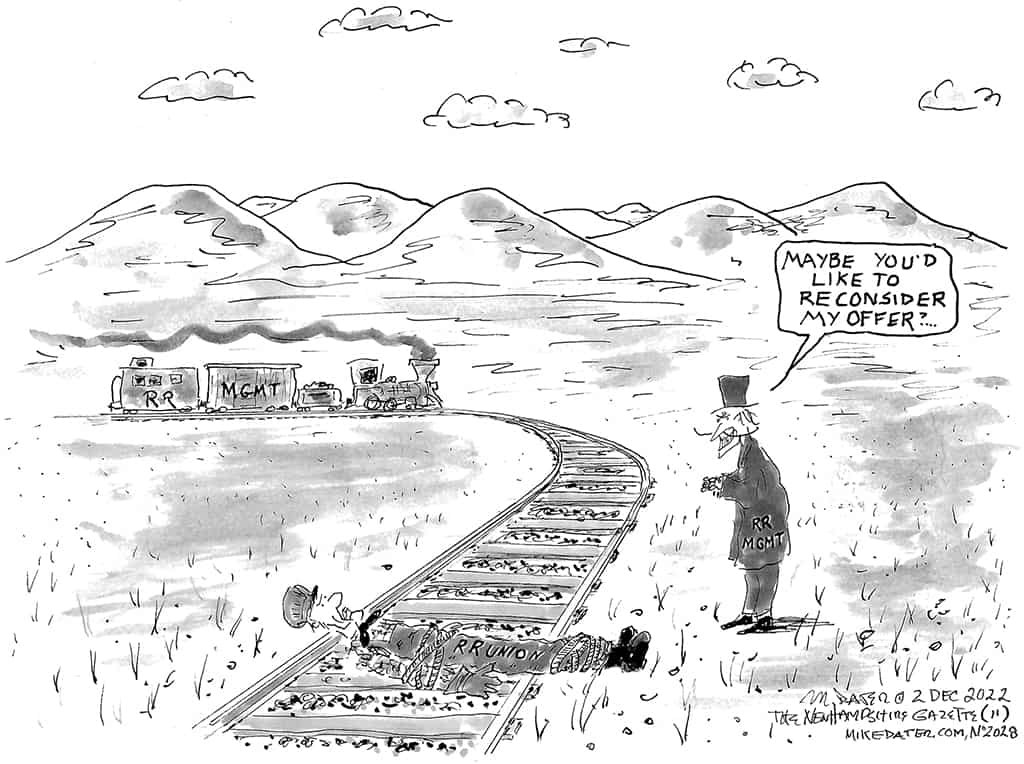 For most of Monday the word “railroad” was absent from the online front pages of the New York Times, the Washington Post, and the Boston Globe.

Maybe all those editors were girding their loins, in preparation for whatever comes next. After all, if railroad workers go on strike, half the stories they publish will suddenly revolve around that mode of transportation.

Finally it appeared, at the end of the day. President Biden called on Congress, wrote the Times, to “pass legislation to impose an agreement that his administration helped broker but that has failed to win the support of all the rail labor unions.”

Earlier AP had reported—dateline Omaha—that a coalition of 400 business groups led by the U.S. Chamber of Commerce had “sent a letter to Congressional leaders Monday urging them to step into the stalled talks because of fears about the devastating potential impact of a strike that could force many businesses to shut down if they can’t get the rail deliveries they need. Commuter railroads and Amtrak would also be affected in a strike because many of them use tracks owned by the freight railroads.”

An anonymous White House spokesperson told AP that a strike is “unacceptable.”

The same story reports that Rep. Brian Fitzpatrick [R-Pa.]—a co-chair of the bipartisan Problem Solvers Caucus—told Fox News Sunday, “Congress will not let this strike happen. That’s for sure.”

Well! That surely is a big relief. The public has taken enough of a beating lately.

We’ve been through nearly three years of a Covid pandemic that’s still knocking off 300 people a day. Throwing in the flu and RSV, we’re said to be in a tri-demic now—and that nasty-sounding neologism doesn’t even count the grotesque new Monkey Pox. Oh, pardon us—in the interest of garnering broader public acceptance for this new malady, which seems to have  leapt from the screen of a B-movie, we’re now being told to call it M-Pox™.

While we’re on the topic of generalized threats to public health, the intended merger of two enormous grocery chains deserves a mention. Perhaps it’s a good thing so few are paying attention to this issue. Any increased demand for anti-depressants would likely lead to a shortage.

In the all-too-likely event that the Justice Department’s lone remaining anti-trust lawyer, chained to a dank wall in the basement, trades his approval of the merger for a bowl of gruel, several hundred supermarkets across this allegedly-great nation will be permanently shuttered. The neighborhoods once served by those stores will then turn into food deserts. This will have predictable and deleterious effect on the diets, and health, of millions. It’s a terrible thing to contemplate but it must be done: it’s necessary to maximize shareholder value.

For almost a year, at irregular and unpredictable intervals—making them all the more disconcerting—we’ve been getting jolts of psychic discomfort from Ukraine. If we may mix a metaphor, it’s like a Chinese menu: column one is nuclear war, column two is a meltdown. Unending stories of combat, massacres, torture, and rape represent all the rice you can eat.

Even in the one thing at which this country truly excels, i.e., consumption, we Americans have been thwarted and discombobulated. Supply chain disruptions have deprived us—again, in unpredictable ways—of using our credit cards to spend money we don’t have on crap we don’t need. Oh, the humanity….

So here we were, minding our own miserable business as we suffered the cumulative effects of all these previous assaults, and suddenly railroad workers—whom we had recently been led to believe had agreed to a contract—are threatening to bring the economy to a halt.

Such, at least, is the situation as it is presented to us by our strictly objective friends in the corporate mass media.

Based on the Gospel of Supply and Demand, one would think that the workers are in a very powerful position here. As with Christianity, though, it can be risky to rely on strict adherence, even from professed believers.

To paraphrase The Joker, workers can get fired, or injured, have their pensions stolen, and nobody panics, because it’s all “part of the plan.” Let workers actually exert their collective power, though, and everyone loses their minds.

Less than 24 hours after the 1992 strike began, Congress passed legislation barring strikes and establishing an arbitration system to resolve such disputes. Rep. Pat Williams (D-Mont.) called the bill “a fundamental mistake that will haunt railroad workers for decades.” The AFL-CIO said the legislation “punishes workers by taking away their right to strike while rewarding the carriers for their irresponsible action in shutting down.”

The deal announced in mid-September was hashed out between union representatives and the railroads. If union members can’t vote on the contract themselves, their union negotiators might as well be labor contractors—in which case they’d be working for the railroads, not the workers.

It’s worth remembering what the rail workers are asking for: 15 days of sick leave, which would cost the railroads $668 million a year.

That may sounds like a lot of money, but it’s just three percent of the $23 billion in profits the railroads made last year.

How much sick leave did the railroads offer? Exactly zero [0] days.

Journalist Judd Legum did the math: Warren Buffett, aka the “Sage of Omaha,” owns Berkshire Hathaway, which in turn owns BNSF.

“That’s enough to pay for 15 days of paid sick leave for the entire workforce for two years.”