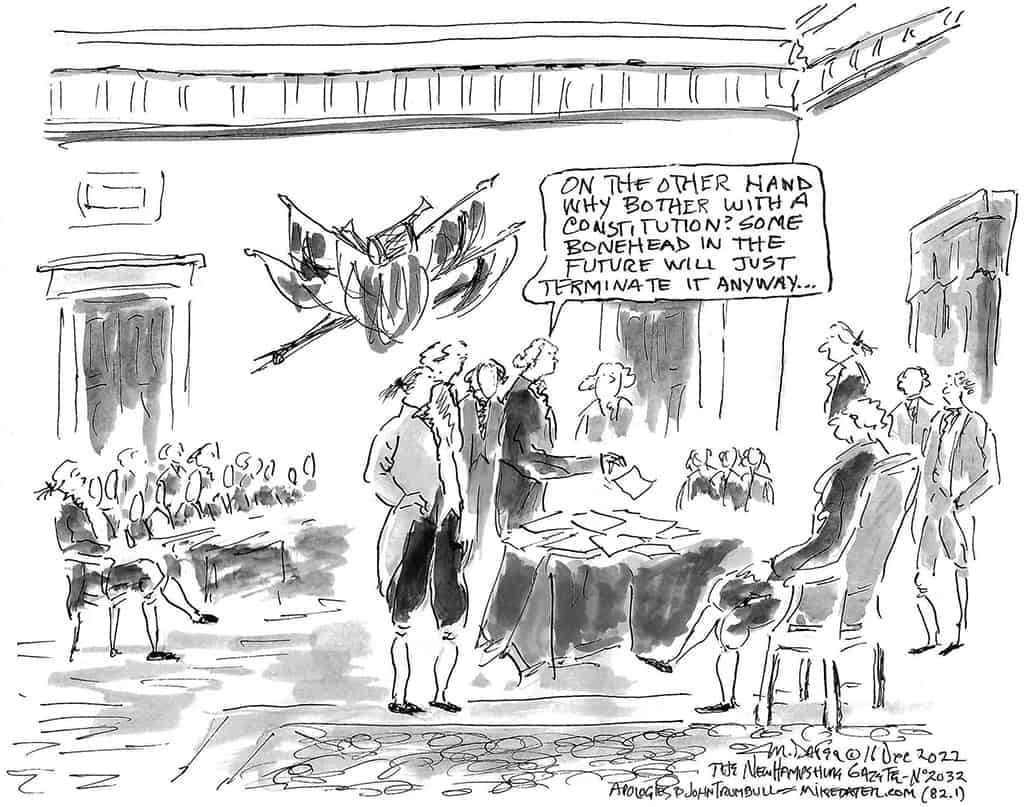 Long ago, in the year 2020—because in times like these, two years can seem interminable—there was a minor flap because, for the first time in living memory, a major political party held a presidential nominating convention without bothering to write a new platform. Many will have forgotten all about that breach with tradition; these days they do die like mayflies.

Instead, in what now seems a quaintly reality-based gesture, the GOP admitted that it had “significantly scaled back the size and scope of the 2020 Republican National Convention in Charlotte due to strict restrictions on gatherings and meetings, and out of concern for the safety of convention attendees and our hosts.”

We do not know if plans have been announced for a 2024 Republican Convention. Perhaps the party will ditch that next. At the rate they’re going, extrapolating two years out, we would not rule out a candidate selection process derived from the script of Sam Raimi’s underrated western flick The Quick and the Dead: set ’em up in brackets, and let ’em shoot it out; last one standing gets the nod.

What’s that you say? You think that’s preposterous?

Here’s some preposterous for you: On Saturday, December 3rd, a former president, whose name we will feign to have forgotten just to spare ourselves the tedium of typing it yet again, posted on his failing, misleadingly-named social media platform Truth Social:

“So, with the revelation of MASSIVE & WIDESPREAD FRAUD & DECEPTION in working closely with Big Tech Companies, the DNC, & the Democrat Party, do you throw the Presidential Election Results of 2020 OUT and declare the RIGHTFUL WINNER, or do you have a NEW ELECTION? A Massive Fraud of this type and magnitude allows for the termination of all rules, regulations, and articles, even those found in the Constitution. Our great ‘Founders’ did not want, and would not condone, False & Fraudulent Elections!”

“Termination of all rules…even those found in the Constitution”—an unusually clear statement, coming from this blather-scatterer. To paraphrase this message in a way that eliminates the false statements and weeds out verbal clutter while maintaining and clarifying its intent, we offer the following re-write: “Ignore the facts, throw out the law, and make me your ruler.”

Two days later, squid-like, the perpetrator of this seditious bid for power emitted more ink, in one of his signature “Don’t believe what I plainly wrote, instead believe what I’m writing right now, directly contradicting what I recently” moves:

“The Fake News is actually trying to convince the American People that I said I wanted to ‘terminate’ the Constitution. This is simply more DISINFORMATION & LIES….”

We see three possibilities here, of which no more than two could be true: the man may take his followers for fools; he could be suffering from brain-damage; or, he may be a secret student of such postmodern philosophers as Jean-François Lyotard and Jacques Derrida.

Senator Mitch McConnell has been criticised for taking even longer to come up with a statement in response than it took the Mango Mussolini to attempt to cover his tracks. In all fairness, the Minority Leader’s spirit animal is the turtle.

Besides, this is hardly one of those routine situations for which canned responses may be prepared in advance. When was the last time a political leader in this country has had to respond to a high party official calling on his supporters to overthrow the duly-elected government? [Let’s see here…2022 – 1861…161 years.]

What McConnell said to reporters was, “Anyone seeking the presidency who thinks that the Constitution could somehow be suspended or not followed, it seems to me would have a very hard time being sworn in as president of the United States.” Now, that’s bold leadership. In other news, Jeffrey Dahmer would be unlikely, were he still alive and not in prison, to become the head chef at the Old Ebbitt Grill.

McConnell had it easy. Some of his Republican colleagues in the Senate could plausibly be described as not-insane. House Minority Leader Kevin McCarthy isn’t so lucky.

TalkingPointsMemo.com [TPM] released on Monday a trove of text messages received by White House Chief of Staff Mark Meadows from “at least 34 Republican members of Congress as they plotted to overturn President Trump’s loss in the 2020 election.” TPM gave top billing to the following text from Rep. Ralph Norman [R-S.C.]:

“Mark, in seeing what’s happening so quickly, and reading about the Dominion law suits attempting to stop any meaningful investigation we are at a point of *no return* in saving our Republic !! Our LAST HOPE is invoking Marshall [sic] Law!! PLEASE URGE TO PRESIDENT TO DO SO!!” Our Appropriateness Desk is disappointed to report that Norman represents the Palmetto State’s 5th Congressional District, while Fort Sumter lies in the 1st District.

Rep. Mike Kelly [R-Pa.] is similarly unafraid to violate his oath of office. Why not? He won the Keystone State’s blood-red 16th District with a whopping 59.3 percent of the vote.

Kelly wrote to Meadows, “…Let me know if there’s anything I can do to fight these MF’ers in Pa.? Our President is heroic !! Thank you for all you’ve done and please let the President know just how much he’s loved and appreciated in Pennsylvania!” Kelly’s car dealership—started by his father—has received unwanted attention from a local TV station for selling defective vehicles. Quelle surprise. His dealership collected about a million bucks in PPP loans, most of which has apparently not been repaid. Not to mention the accusations of insider trading, &c.

The true Queen of the May [Try to Overthrow the Gummint Again, Given Half a Chance], though, is Marjorie Taylor Green. She said last weekend, “If Steve Bannon and I had organized that, we would have won. Not to mention, it would have been armed.”