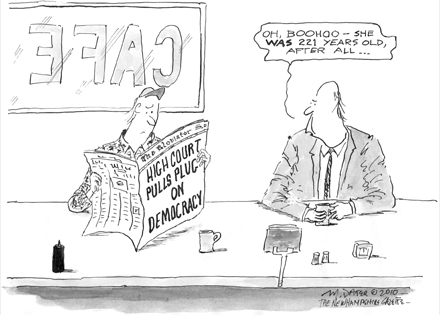 On January 19th, Massachusetts voters turned up their noses at the Democratic candidate, the late Martha Coakley,[1] and elected Scott Brown, a Republican. With Brown’s election, the U.S. Senate’s Democratic caucus will have a mere 59 votes, facing a mighty 41 Republicans on the other side of the chasm. As a CNN headline put it, “Brown’s election tips Senate balance of power to GOP.” [2]

The playing field has thus been leveled. Formerly, corporations were subject to certain restrictions; they had to resort to a variety of devious and circuitous measures to exert overweening influence over elections. Now multi-national enterprises with multi-billion dollar budgets can spend with the same wild abandon as the guy down the street.

Brown’s election can be attributed to a legitmately fed-up electorate. Strapped after decades of stagnant wages and alarmed by ballooning federal deficits, tired of being taken for granted by Congress and seeing jobs outsourced by corporations, Massachusetts voters rejected the political party that passively let those terrible things happen, and voted instead for the party that actively forced them to happen. In a remarkable coincidence, it was that same party that appointed the justices who rendered the Citizens United decision.

Rarely has a case so clearly pitted humans against corporations. In legal terminology, humans are “natural persons,” and corporations are “legal persons.” Rendering an objective decision between the two called for an almost insanely rigorous degree of partiality. The justices in the majority in this case clearly met that standard, despite being allegedly human themselves.

It might be useful to know for sure how many of those five judges are members of the Federalist Society. [3] The Society, whose influence over the confirmation of federal judges has steadily increased since the failed nomination of its member Robert Bork in 1987, declines to permit mere citizens to know the names of its members. We do know that Samuel Alito has said openly that he is a member. The Chicago Tribune has reported that Antonin Scalia and Clarence Thomas are members.

John Roberts, who had long denied being a member, was listed as serving on the Steering Committee in the Society’s Leadership Directory for 1997-1998. Roberts claimed rather curiously during his confirmation hearings that he could not recall being a member. In the eyes of the Senate, however, that discrepancy was not sufficient cause to deny him the position of Chief Justice.

The Federalist Society is but one of a phalanx of right-wing institutions that have clawed their way into power over the past forty years. Journalist Robert Parry dates [4] the birth of this phenomenon to the morning of September 12, 1970, when Richard Nixon woke late at Camp David and began “barking orders.” Quoting Nixon’s chief-of-staff H.R. Haldeman’s book The Haldeman Diaries, Parry writes that the President had “several plots he wants hatched.” Nixon was “pushing again on [his] project of building OUR establisment in [the] press, business, education, etc. ….”

Less than a year later, on August 23, 1971, a corporate lawyer and Phillip Morris board member named Lewis F. Powell, Jr. wrote a 6,000-word “woe is us” memo to his friend Eugene Snydor, Jr., the director of the U.S. Chamber of Commerce.

“It is still Marxist doctrine,” Powell wrote between tears, “that the ‘capitalist’ countries are controlled by big business …. Yet, as every business executive knows, few elements of American society today have as little influence in government as the American businessman, the corporation, or even the millions of corporate stockholders. If one doubts this, let him undertake the role of ‘lobbyist’ for the business point of view before Congressional committees.”

Capitalism itself was under attack and might not survive without a massive organized effort, Powell claimed. Fortuitously for (corporate) America, Powell was appointed to the Supreme Court later that same year; in 1978, he wrote the majority opinion in First National Bank of Boston v. Bellotti, which struck down a law restricting corporate free speech.

Nixon’s own former Treasury Secretary William E. Simon played a central role in coordinating the efforts of existing right-wing organizations and assisting in the foundation of new ones. The Washington Post described Simon as “a legendary architect of the modern conservative movement,” as well as “a mean, nasty, tough bond trader” — and that description came from Simon’s friend, Edwin Feulner, president of the Heritage Foundation. [5] “Simon was known to awaken his children on weekend mornings by dousing their heads with buckets of cold water,” the Post said. When not busy waterboarding his children or wrenching the U.S. government towards the far-right, Simon occupied himself with leveraged buyouts, raking in millions and throwing thousands out of work while destroying companies like Anchor Glass and Simmons Mattress.

The Nixon/Powell/Simon pro-ject has been a great succeess, at least from the perspective of a “legal person.” By the early 1990s, “conservative” foundations were spending $70 million a year in the effort to make reactionary ideas seem moderate. Congress obligingly bought into the two main elements of their right-wing dogma: they took the leash off Wall Street, thereby wrecking the economy, and they eased the tax burden on the suffering rich, thereby bankrupting the government.

Now hordes are out of work, and no one can afford to hire them. Who’s to blame? In the eyes of many — including the broke and unemployed — it’s those damned Democrats, and the biased liberal media.

But that’s all right. There’s nothing to worry about. Now that the Supreme Court has hung price tags on Congress and the White House, corporations will be free to hire us a new government — one that will finally unleash the full power of free enterprise.

[Disgruntled readers will find some basic resources for fighting back at www.nhgazette.com/2010/01/27/corporate-personhood, if they care to join us. — The Ed.]

1 — Yes, yes, we know — technically, Ms. Coakley is alive. Not enough to make a difference, though.

2 — Yes, yes — we know. Technically, the Democrats have a majority. Try telling them that.

3 — The society asserts that “law schools and the legal profession are currently strongly dominated by a form of orthodox liberal ideology which advocates a centralized and uniform society.” Oddly enough, if you were to substitute “federal government” for “law schools and the legal profession,” and “conservative” for “liberal,” you end up with a far more accurate statement.

4 — In Secrecy & Privilege: Rise of the Bush Dynasty from Watergate to Iraq, pg. 71.