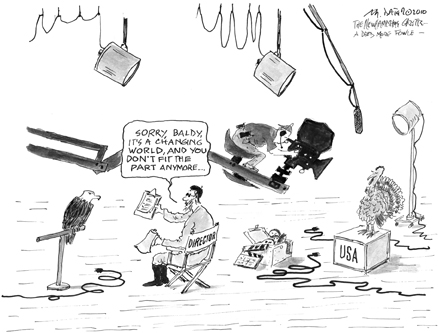 Democrats, eager to look useful before the next election, have been trying to pass health care reform. Opinion polls have shown that a clear majority of the American public supports health care reform, as long as it includes either an expansion of Medicare eligibility or a public option. Neither of those options is acceptable to Republicans, though.

Desperate to snag a few Republican votes and claim victory, Democrats decided to put a plan on the table that leaves most of the industry in the hands of private insurance companies and forces everyone to buy policies, and then pretend that that is reform.

A poll in mid-December suggested that even the much-reviled status quo was more popular with the public than the Democrats’ watered-down proposal for reform; still, Democrats seem unable to make any headway with Republicans. President Obama has proposed a meeting with Congressional leaders on February 25th. On Tuesday, House Minority Leader John Boehner (R-OH) and Senate Minority Leader Mitch McConnell (R-KY) expressed their willingness to meet, but both were dismissive of the bill’s chances. McConnell said, “We need to put that bill on the shelf [and] start over with more modest goals and … deal with the problems the American people would like us to deal with.”

Since that which is acceptable to the public is unacceptable to the Republicans, and vice-versa, the Democrats’ only hope for getting a bill through the Senate might be to retain the mandatory insurance policy while simultaneously removing any provisions that force the health insurance companies to pay for any sort of medical treatment whatsoever.

In a similar vein, with unemployment still at nearly ten percent, Democrats are trying to pass a jobs bill. The bill includes measures Republicans usually favor, such as tax breaks for employers; but so far Republicans have been reluctant to get on board.

“Not all members of the Finance Committee are fully aware of what the package might look like,” McConnell said on Tuesday. “My members need to be able to feel like they understand what they are being called upon to support.”

Given the apparently low level of general awareness among Republicans, and their inability to understand anything which they have not proposed themselves, prospects for the jobs bill appear dim.

If the Republicans succeed in preventing the passage of meaningful health care reform, and if the rate of unemployment stays high, they expect to reap rich rewards during Congressional elections this November.

That would be a load off Joe Biden’s mind. “I’m not so sure what a blessing 60 votes was,” Biden said after Republican Scott Brown took the Senate seat formerly held by Teddy Kennedy. “When we had sixty votes there was the expectation left, right, and center that we could do everything we wanted to do, which was never realistic. Never.” Now when Democrats fail to do anything, at least no one will be disappointed.

And if Republicans do well in state elections, the stage will be set for even greater GOP triumphs. As the Constitution mandates, Congressional redistricting will take place following the 2010 Census. In most states, this intensely political process will be conducted by state legislatures. Whichever party holds the majority will be able to gerrymander a state’s Congressional districts in its favor.

The Washington Post reported January 25th that the Republican party has two organizations determined to do just that. The newly-formed American Majority Project, which is expected to have “tens of milliions” to spend, will be under the direction of one James Erp. He said his organization would “help Republicans and like-minded groups fight back and retake control of the redistricting process.”

The Republican State Leadership Committee will devote its ample $40 million budget to the same end. Its chairman, Ed Gillespie, told the Post that “targeting 35 to 40 state legislative races this cycle could translate into 25 to 32 U.S. House seats over the next five cycles. It makes a lot of sense to get this right.”

And as if all this were not sufficiently revolting, our Census will take place this year on April Fool’s Day.