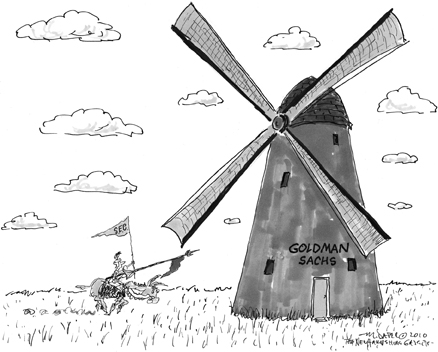 Wall Street was shocked to discover last Friday that it is possible to conduct business in a manner so depraved that the Securities and Exchange Commission (SEC) will actually attempt to take punitive action.

Goldman Sachs, an institution recently characterized by The New York Times as “the most powerful bank on Wall Street,” was charged with fraud for creating a collateralized debt obligation (CDO) called “Abacus” and selling $1 billion worth of it without disclosing to the purchasers that it had been built to the specifications of a hedge fund manager who intended to make tons of money when Abacus turned into … let us be generous and say, “a pumpkin.”

We have searched the crowded annals of corporate malfeasance in vain for an apt comparison. The closest thing we could find was the case of the Ford Pinto.

In 1968, the Ford Motor Company determined that 1) its not-yet-released entry into the compact car market was likely to explode in flames when rear-ended in accidents, but 2) redesigning the car to make it less explosive would cost more — $11 per car — than paying compensation to the families of its incinerated victims. So Ford went ahead and sold 100,000 Pintos, which eventually earned the sobriquet “the barbecue that seats four.”

This analogy doesn’t really work, though. To properly compete with Goldman’s Abacus scheme, Ford would have had to install detonators inside each Pinto’s gas tank and take out life insurance policies on the drivers listing itself as the beneficiary.

For its innovative work in building its financial death trap, Goldman accepted a $15 million fee from the hedge fund Paulson & Co. Goldman then proceeded, according to published accounts, to sell $1 billion “worth” of self-destructing Abacus stock to their own clients. The clients lost their $1 billion investment, and Goldman somehow lost $90 million. Paulson & Co., though, apparently made out like bandits. Funny how that worked out.

The fundamental elements of the Paulson/Abacus story were first made public last December in The New York Times. The average person would probably expect that after Goldman was publicly exposed as a den of double-dealing cuthroats, the company would have seen its fortunes decline. This demonstrates why only the most exceptional people are fit to manage these large financial firms. In fact, business continued to go so well for Goldman Sachs that, in January, it was able to pass out bonuses totalling $16 billion to its employees.

True, after the SEC sued Goldman for fraud last Friday, their stock did plummet. And again, the average person — and certainly the average Reader of this paper — might expect that to have thrown a massive spanner into Goldman’s financial gears. But no. On Monday, Goldman announced that things are going so swimmingly it was passing out another $6 billion to their plucky band of hard-working financial geniuses. And on Tuesday, the firm declared a $3.46 billion profit.

Goldman’s glittering success, when seen in the context of a financial landscape consisting of smoking piles of rubble, much of which it created, naturally stirs up a certain amount of resentment, especially among those prone to envy.

Knowing that it would, therefore, have to defend itself most vigorously, Goldman spared no expense when it lawyered up. The firm hired President Obama’s own former White House Counsel, Greg Craig.

The Craig hire isn’t the only connection between Obama and Goldman Sachs. The company and its employees, according to Business Week, were Obama’s second largest source of donations, collectively giving nearly $1 million to his presidential campaign.

Despite such largesse, Obama has vowed to work with his Democratic colleagues in Congress to pass financial reform legislation. A central element of the Democratic plan is an agency charged with protecting consumers from unscrupulous banking practices.

Given recent events, the average person might think that such an agency could be quite useful. But once again, the average person would apparently be a blockhead, at least in the view of Republicans. The GOP maintains that additional restrictions on bankers are unnecessary and could seriously damage what’s left of the U.S. economy.

That view seems to have been reinforced on April 8th, when Mitch McConnell (R-KY), the Senate Minority Leader, and Sen. John Cornyn (R-TX), the chairman of the National Republican Senatorial Committee, made a pilgrimage to Wall Street. The two Senators sat down, FoxBusiness.com reported, with “about 25 Wall street executives, many of them hedge fund managers,” and made the case that with enough campaign contributions they could put more Republicans in Congress and stop all this reform nonsense.

Last week Senator McConnell sent Majority Leader Harry Reid (D-NV) a letter saying the GOP was opposed to the Democrats’ finance reform bill. Reid knew that. The point was that all 41 Republican Senators signed it. In the Senate, such a letter is a warning of a filibuster; it’s a less-pungent version of a fish in the mail from a Mafia don.

The Republicans’ anti-reform, pro-filibuster position held firm right up until Tuesday afternoon, but then McConnell began to waver. Republicans started talking about influencing the bill instead of just blocking it.

We can’t say for sure what caused this sudden about-face. Maybe Republican leaders had a change of heart regarding the virtues of government regulation of financial services.

On the other hand, maybe they just realized that in the wake of the Abacus scandal, two rounds of Goldman Sachs bonuses, record profits up and down Wall Street, and with an election looming in November, now was not the best time to go to the mat to defend Goldman Sachs and the hedge funds.