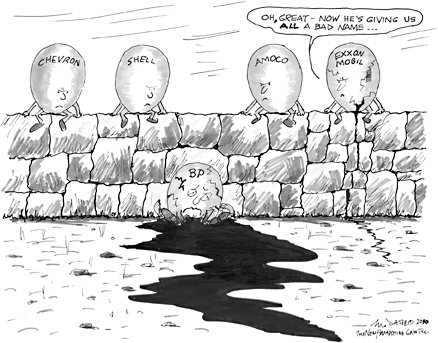 It has now been one full month since BP’s well began spewing crude oil into the Gulf of Mexico. Though that has not been enough time for BP to end this ongoing calamity, it’s been more than enough for the rest of us to learn more about BP and its friends. So far, none of it has been good.

This past fortnight got off to a rather ironic start as the Associated Press reported that a “group of BP executives were on board … celebrating the project’s safety record” when the Deepwater Horizon exploded.

A similar optimism seems to have surrounded BP’s effort to contain the leak, but a 100-foot tall cofferdam failed to work. The company was able to provide, after repeated requests, video footage showing oil gushing from the broken pipe on the floor of the Gulf. That video led some scientists to calculate that the Coast Guard’s 5,000 barrel per day estimate was way off. The true figure, they said, could be as high as 70,000 barrels per day.

BP’s image was further tarnished when a House subcommittee revealed that the well’s blowout preventor had “a dead battery in its control pod, leaks in its hydraulic system, a ‘useless’ test version of a key component, and a cutting tool that wasn’t strong enough to shear through steel joints in the well pipe and stop the flow of oil.” Blowout preventors used to be inspected on a weekly basis, but in the late 1990s, in response to requests from the oil industry, that frequency was reduced to biweekly.

Tony Hayward, BP’s CEO, tried to reassure the public, whom he seems to think are fools and infants. In an interview with the British paper The Guardian, Hayward explained that the “Gulf of Mexico is a very big ocean,” and “the amount of volume of oil and dispersant we are putting into it is tiny in relation to the total water volume.”

The U.S. Coast Guard and the Minerals Management Service (MMS) have been holding hearings in Kenner, LA, which are being covered by the New Orleans Times-Picayune. The paper reported on May 12th that the concept of “inspection,” as it pertains to oil drilling rigs, is rather theoretical. Coast Guard Capt. Verne Gifford testified that the Deepwater Horizon flew the flag of the Marshall Islands “so it could comply with that country’s standards, and not the U.S. regulations.”

Not that U.S. regulations are all that onerous. Mike Saucier, a regional supervisor for MMS, testified that “most of the action MMS has taken to control blowout preventers has been through ‘notices to lessees,’ letters that go to drill operators but are not enforceable.” Coast Guard Capt. Hung Nguyen noted that “MMS approves the design of the well, but they don’t check what type of pipe is used ….” He added, “we have self-certification of critical equipment and safety notices that are not enforceable ….”

There once was a proposal to tighten regulations, but it seems to have disappeared right about the time Dick “Dick” Cheney was holding secret meetings with oil industry executives. Saucier testified, according to the Times-Picayune, that “tighter rules for monitoring deepwater drilling safety systems were proposed nine years ago, but got lost in the shuffle …. New rules were written in 2001 to require secondary control systems for blowout preventers … but MMS higher-ups in Washington never approved the regulations.”

Even when rules are stringent, they don’t always apply. Despite a requirement in the National Environmental Protection Act that oil drillers file environmental impact studies, MMS blithely waived the rule and gave BP a “categorical exclusion” for Deepwater Horizon.

The cavalier attitude seems to have stemmed, at least in part, from a set of rosy assumptions. In a study cited by the Washington Post, MMS “assumed” that the average spill from a drilling rig would release just 1,500 barrels of oil. Deepwater Horizon has spilled at least three times that much every day.

When describing MMS’s relationship with the oil industry in general, “friendly” doesn’t go far enough. The Interior Department’s Office of the Inspector General reported in 2008 that MMS personnel had “frequently consumed alcohol at industry functions, and used cocaine and marijuana, and had sexual relations with oil and gas company representatives.”

Since the 2008 report became public, employees of MMS have presumably stopped having sex with oil company representatives, or have become better at covering their tracks. They are still handing out environmental waivers, though. On May 7th, McClatchy reported that 27 more had been issued in the 17 days since the explosion — including two to BP.

BP has bought up one-third of the world’s available supply of oil dispersant and is using unprecedented amounts on the Gulf spill. Dispersants do not remove oil, but they do make it less visible. Most of the dispersant is coming from a company called Nalco. Other companies make competing dispersants that are twice as effective and up to 20 times less toxic, according to the EPA, but, as The New York Times reported, Nalco and BP have overlapping Boards of Directors, and, therefore, share a financial interest.

Amid the gloom, Transocean Ltd., the company that ran Deepwater Horizon for BP, had a bit of good news. The [London] Times reported May 9th that Transocean had insured the platform for $270 million more than it was worth. That “windfall,” the paper said, would “more than cover” anticipated payments to “survivors and their families.” The Times did not discuss any payments to the families of the eleven men killed.

The Senate has begun considering the extent of BP’s liability. An existing cap limits it to $75 million. Given BP’s first-quarter profits of $5.6 billion, the company could recover their $75 million in less than 30 hours. Sen. Robert Menendez (D-NJ) has filed a bill to raise drillers’ liability to $10 billion retroactively. It was blocked on May 13th by Sen. Lisa Murkowski (R-AK), and again on the 18th by Sen. James M. Inhofe (R-OK). In both cases the argument was that the bill would unfairly benefit larger oil companies at the expense of smaller ones. This argument surprised many Americans who had been unaware that Mom & Pop oil companies even existed.

BP has trouble handling their oil safely even if it gets to the refinery. During a recent three-year period, “97 percent of all flagrant violations found in the refining industry” were committed by BP, according to an analysis of OSHA safety records conducted by the Center for Public Integrity.

But none of this behavior is anything new. Since its founding, BP has relentlessly pursued its own profit unhindered by any consideration of international law, the environment, or the inhabitants of the host nations whose resources made its profits possible. Viewing BP’s Gulf oil spill in the context of history, though, does not make its current behavior more understandable. It just makes it that much more grating.

For forty years BP* extracted oil and wealth from Iran, using deceptive accounting practices all the while to cheat Iran out of its agreed-upon royalties. Long fed up with the company’s unrelenting greed, Iran finally nationalized the company in 1951. In retaliation, Britain, with the help of the CIA, overthrew the duly-elected Iranian government. In its place they installed a dictator, Mohammad Rezā Shāh Pahlavi, thus setting the stage for the Iranian Revolution.

BP’s persistent greed and rampant irresponsibility have left the U.S. with a terrible mess in the Gulf of Mexico, the dimensions of which we cannot yet fully understand — just as they did in the Persian Gulf some sixty years ago.

* The Anglo-Persian Oil Company was founded in Iran (then called Persia) in 1908, according to Wikipedia. Its name was changed to the Anglo-Iranian Oil Company in 1935, then to British Petroleum in 1954.