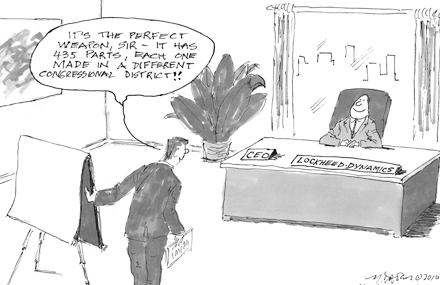 If there is a single notion dominating our national discourse these days, it is that our government is much too big. Republicans have been fervently making that argument since the Reagan ascendancy, only to find themselves out-shouted by the nascent Tea Partiers. Democrats, in their usual fashion, have offered partial, tepid rebuttals from time to time, while letting the core concept stand essentially unscathed.

If, in fact, the government is much too big, then clearly the only rational response would be to reduce the size of its largest component, the Defense Department. Among those calling the loudest for a smaller government, however, Defense is the one thing that must not be cut.

Last month Secretary of Defense Robert Gates went to the Eisenhower Library in Abilene, Kansas to make the case for restraint in the U.S. Defense budget. Gates noted two items in particular: additional C-17s for the Air Force and a “spare engine” for the F-35 Joint Strike Fighter.

“The leadership of the Air Force is clear,” Gates said. “They do not need and cannot afford more C-17s. Correspondingly, the Air Force, Marine Corps, and Navy do not want the second F-35 engine. Yet, as we speak, a battle is underway to keep the Congress from putting both of these programs back in the budget — at an unnecessary potential cost to the taxpayers of billions of dollars over the next few years. I have strongly recommended a presidential veto if either program is included in next year’s defense budget legislation.”

As Gates must surely have known it would, the defense industry’s immune system immediately kicked in.

The Heritage Foundation’s Theodore Bromund wrote, “Defense spending is not squeezing the budget: As Secretary Gates’s remarks show, defense is being squeezed for the sake of the rest of the budget.” According to The Heritage Foundation’s website, Bromund is a Senior Research Fellow in the Margaret Thatcher Center for Freedom, a division of the Kathryn and Shelby Cullom Davis Institute for International Studies at The Heritage Foundation. What a pity Gilbert and Sullivan are no longer with us; perhaps they could have contrived a more splendid title for him.

Another Heritage Foundation talent, former Senator Jim Talent, got right to the heart of the argument. After noting that “national defense is the priority job of the national government,” he observed that “national defense is the only mandatory function of the national government.” Curiously, if this Distinguished Fellow in Military Affairs at The Heritage Foundation ever wore a military uniform, he forgot to mention it in his bio.

In The Weekly Standard, Gary Schmitt and Thomas Donnelly toed the same “guns, yes; butter, no” line. “If Obama and his team prevail,” they wrote, “they will have created a spending dynamic that puts the United States on the same road as the countries of Europe, where domestic welfare crowds out all but minimal spending for defense.” The Weekly Standard is co-edited by Fred Barnes and William Kristol. Its annual losses, estimated at about $1 million a year since its founding in 1995, are covered by Rupert Murdoch. Poor Rupert, apparently his Fox News channel is an insufficient outlet for his bellicosity.

With or without superfluous spare engines, the F-35 is an expensive program. The Pentagon eventually intends to buy 2,443 of the planes from Lockheed Martin — a number that will surely cause the Taliban to surrender once they hear it. The original price tag was $59 million per plane but due to design changes the eventual cost is expected to be $130 million after development costs have been amortized. The total package is expected to come in at about $323 billion — a figure that seems not to disturb Bromund, Schmitt, Donnelly, and Talent in the least.

Rep. Barney Frank (D-MA), who recently called for a $100 billion cut in the defense budget, is anything but a hawk. Yet even he is susceptible to the charms of unnecessary defense spending. The Boston Globe reported on May 27th that Frank would vote in favor of the spare F-35 engines, along with the rest of the Massachusetts delegation. They just happen to be made at the GE plant in Lynn.

Addressing the American Society of Newspaper Editors on April 16, 1953, President Eisenhower said, “Every gun that is made, every warship launched, every rocket fired signifies in the final sense, a theft from those who hunger and are not fed, those who are cold and are not clothed. This world in arms is not spending money alone. It is spending the sweat of its laborers, the genius of its scientists, the hopes of its children. This is not a way of life at all in any true sense. Under the clouds of war, it is humanity hanging on a cross of iron.”

The huge and complex U.S. Federal budget can be assessed from any number of different viewpoints. According to the Congressional Budget Office, defense spending takes up only 20 percent of the budget — just slightly more than the 18 percent that goes to “non-defense discretionary spending.” A whopping 54 percent goes to Medicare, Medicaid, Social Security, and other “mandatory” spending programs. The remaining eight percent goes to paying interest on the national debt.

For a contrasting view, we turn to the War Resisters League (WRL). To begin with, the WRL does not include trust funds like Social Security in its calculations because they are “raised and spent separately from income taxes.” As WRL notes, “the government practice of combining trust and federal funds began during the Vietnam War, thus making the human needs portion of the budget seem larger and the military portion smaller.”

WRL does include some items that seem to have escaped the attention of the Congressional Budget Office, such as veterans’ benefits, the half of NASA’s budget that goes to military ends, and that part of the national debt that was incurred by military spending. Having thus clarified the issue, the WRL concludes that 54 percent of the budget is consumed by the two categories: “past military” and “current military.” The leftover 46 percent is split among three categories they call human resources, general government, and physical resources.