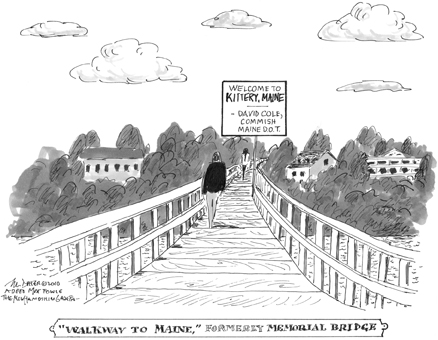 Maine and New Hampshire — for seventy years the two states have been connected by two bridges: the older, smaller Memorial Bridge, and the Sarah Mildred Long Bridge. Each carries thousands of people a day over the turbulent Piscataqua River. In recent months though, it seems the bridges have been dividing the states.

Recent developments suggest that the debate over the future of the bridges could soon become more turbulent than the Piscataqua. Fortunately, there is a simple solution. But before we get to that, let’s revisit how we got to where we are now.

Because they are large steel structures in a harsh maritime environment, both bridges require expensive maintenance. Because they must be raised and lowered thousands of times a year, both are expensive to operate. Unfortunately, for several decades both states have practiced a sort of false economy, stinting on routine maintenance to take pressure off state budgets.

A recent succession of alarming inspections and recurrent mechanical problems finally forced the states to address the fact that, without a complete rehabilitation or replacement, Memorial Bridge would have to be closed. The Sarah Mildred Long bridge was deemed to have a few more years of useful life, but only a few.

With both states equally responsible for the bridges’ operational and maintenance costs, they have to agree somehow on a way forward. New Hampshire proposed a dual application for federal stimulus funding to rehabilitate both bridges, but Maine balked. New Hampshire went ahead and applied anyway. The application was denied; Maine’s lack of involvement may not have been the deciding factor, but it certainly didn’t help.

Maine proposed a $2 million study, the outcome of which would determine the future of the two bridges. New Hampshire thought a study was an unnecessary expense which could delay a resolution, but acquiesced. Now, as the Maine-New Hampshire Connections Study nears completion, it is $2 million over budget with costs still rising.

More disturbing than the cost overrun, though, is the Maine Department of Transportation’s apparent eagerness to manipulate the study process and take unilateral steps outside of that process to achieve its own agenda, to the detriment of both Portsmouth and Kittery.

The study, as it was originally sold to New Hampshire, was to begin by considering every conceivable option for getting vehicular traffic across the river. Then those options that were deemed to be “fatally flawed” would be eliminated. Finally, a choice would be made from among the remaining options.

Logically, the permanent removal of Memorial Bridge had to be included as a possibility, although no one from Kittery or Portsmouth could take that option seriously.

At a Connections Study public meeting on May 6th, engineers representing both states said that the latest inspection showed that the Memorial Bridge had deteriorated too badly to be rehabilitated.

New Hampshire DOT’s Bob Landry summed up the two remaining options. “[O]ne is a replacement [bridge] with vehicle traffic and some arrangement for pedestrian [and] bicycle usage. The second is a ped-bike bridge only. Both are lift structures, both sit on the existing sub structures, the granite in the river.”

George Campbell, New Hampshire’s Transportation Commissioner, then addressed the relative cost of those options: $96 million for a replacement Memorial Bridge which would carry vehicular, bike and pedestrian traffic, or $62 million for a bridge serving bicyclists and pedestrians only.

Either way, Campbell noted, the bridge would need a 300-foot lift capacity to accommodate shipping traffic on the river. Campbell then added a detail sure to rattle local budget-writers: “I’m not sure about Maine, but we in New Hampshire don’t maintain bike-ped bridges, so if we build one, Portsmouth and Kittery own it and have to pay for and operate the lift 4,000 times a year. So that’s an issue.”

Campbell said the New Hampshire DOT preferred plan would be to replace Memorial Bridge with a new, full-service, vehicular, bike and pedestrian bridge on the existing granite piers and build a $121 million replacement for the Sarah Mildred Long bridge, retaining its rail capacity but positioning it better to improve river traffic.

Maine Transportation Commissioner David Cole did not attend the May 6th meeting; but Commissioner Campbell, who had recently spoken to Cole, relayed Maine’s preference: “What they’re exploring as their primary option is the Sarah Long at four lanes and the Memorial as a bike-ped.”

“The situation,” said Campbell, “is that the Maine Legislature has adjourned and gone home and they haven’t given any money for either bridge.”

Earlier that day, at a hearing on the Ten Year Highway plan, she had sought and gotten support for an amendment which would allow the State to borrow $40 million in anticipation of federal highway funds. That $40 million would be put up as earnest money from both Maine and New Hampshire towards a Federal TIGER stimulus grant. Then Maine could pay back its share to New Hampshire in subsequent years.

The good news is that Clark’s amendment was subsequently approved by the legislature and Governor Lynch. The bad news is that Maine said, “No thanks.”

Both states agree on one thing: it will take at least ten highway lanes total crossing the Piscataqua to meet the projected traffic demand for the next twenty years. But Maine just doesn’t give a damn about Memorial Bridge. Maine wants to build a new, four-lane, mid-level replacement for the Sarah Mildred Long Bridge. Add that to the six-lane high-level Piscataqua, or I-95 bridge, and they’re satisfied.

As for Memorial Bridge, Maine is now suggesting that it be replaced with an “enhanced transportation” option: bus service from Kittery to Portsmouth, with bike racks on the buses.

Ben Porter, a Badger Island resident, says this of the plan: “We’ve been professional and reasonable, but they have violated the process that they’ve laid out, and they’re not playing fair at this point. They threw down the gauntlet, so we’ve got to to stand up and fight for this.”

Our own modest proposal is that Kittery secede and become part of New Hampshire.