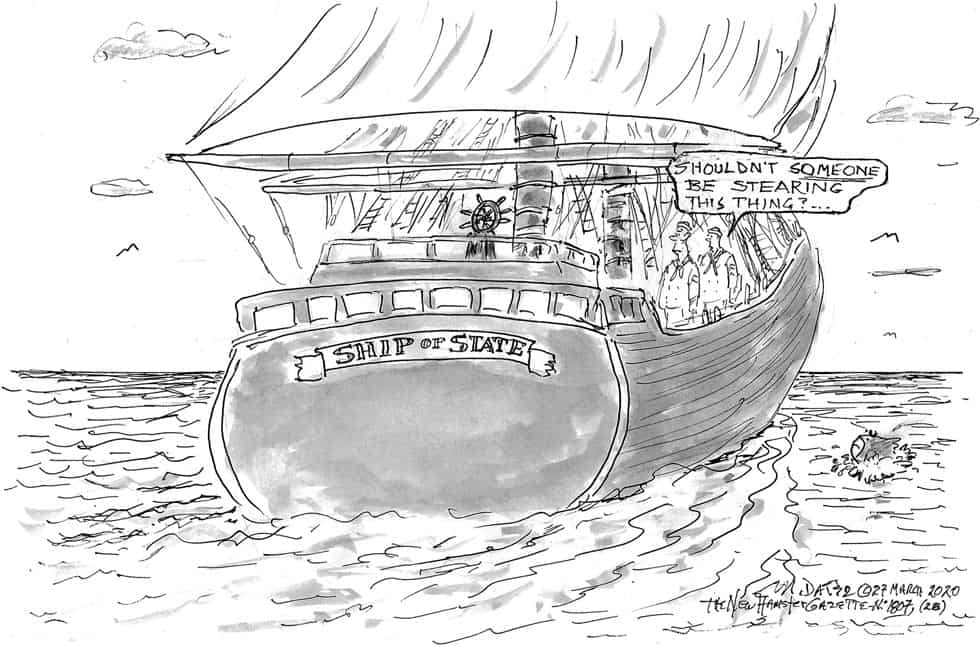 One year ago we ran a Rant under the headline, “Are We Our Own Sea People?” It noted that, in the Late Bronze Age, the Eastern Mediterranean was home to a whole array of highly developed civilizations living comfortable, stable lives. Then in 1177 BC, it all fell apart: “Orderly, comfortable cities collapsed without the trade which had made them livable. Essentially, the world ended—granted, with enough survivors to scrape by, generation after generation, until they could knit their society together again.

“One theory attributes this havoc to the enigmatic, mysterious Sea Peoples. What little we know about them is derived from a few hieroglyphics. Whoever they were—possibly some coalition of migrating hordes—they had, alas, no Homer to memorialize their story.”

One presumes, however, that the Sea People at least had the wit to make sure that someobody was steering their damn boats. We, on the other hand, have…well, you know. We’ll not try here to enumerate the failings of this so-called administration. Let more fully-staffed organizations scurry like squirrels after those acorns. We’ll just stand in awe of the extent of the wreckage—while we still can.

It wasn’t prescience that caused us to meditate last year on the collapse of those civilizations thousands of years ago. It was more like a decent respect for gravity.

A certain small subset of Americans—who else?—enjoy a sport called anvil shooting. Small hollows in the bottom of a standard-pattern anvil will hold about a pound of black powder. That’s enough to lift a hundred-pounder 200 feet in the air. For some, this pastime needs no explanation; for others it will remain forever inexplicable. Our point here is that even people who are crazy enough to send an anvil as high as the North Church’s weathervane have enough sense to know that the damn thing’s coming back down.

A certain large sector of America’s political class, however, insists that the only good government is the Defense Department, plus as many hanging judges as the Federalist Society can name. Anything beyond that is a tyrannical effort to crush the American Way of Life under the bootheel of Godless Communism. Whatever you want, if you can’t find it on the Free Market, you don’t need it; if you can’t afford it, you just need to work harder.

Decades of repetition of that line finally addled America’s electorate sufficiently—those whom the GOP’s elections operatives permitted to vote, anyway—for them to elect a fake billionaire whose brand was only saved from the dumpster by a TV show which let him play an authoritarian bully. Talk about type-casting.

Luckily for him, star-struck CNN found his egregious financial crimes less interesting than his logorrhea. He doesn’t know much, but he knows his best chance—his only chance—of avoiding prosecution for his crimes is to get re-elected. Hence the effort—no matter how futile—to cover up accurate Covid-19 numbers.

The Dementia-Patient-in-Chief told the Fox Falsehood Dissemination System on Tuesday, “Nobody ever expected a thing like this.” It should come as no surprise to the sentient that the opposite is true. That same day Politico published a Playbook for Early Response to High-Consequence Emergency Infectious Disease Threats and Biological Incidents. Prepared by the National Security Council, and bearing the Seal of the Office of the President of the United States, it was created in 2016.

Had the Playbook been competently used in a timely manner, we’d probably be talking today about cases of Covid-19 being tracked and isolated in small, localized hot spots. Instead, The Petulant One fired those whose job it was to follow the plan. As a result, we’re now #1—in cases of Covid-19. We’re barely testing, though, so the real number is bound to be much higher.

That’s just nit-picking, though. The exact number is irrelevant because the rate of infections is doubling so fast.

Up until about a month ago, the official line of our corporate “free” press was that the economy was going gangbusters. Meanwhile, here on this planet, the Brookings Institute reported last month that “53 million Americans between the ages of 18 to 64—accounting for 44 percent of all workers—qualify as ‘low-wage.’ Their median hourly wages are $10.22, and median annual earnings are about $18,000.”

Such findings are, of course, routinely scoffed at by dimwitted trust fund babies with comfortable sinecures at one of the innumerable oligarch-funded propaganda mills. “They’re not poor,” writes Archibald Balderdash IV, “they’ve got cell phones—they’re just freeloaders who want you to pay for their health care”—as if you could drive for Über without a cell phone, between your other two jobs.

With this as background, the current crisis has jacked up unemployment claims to about 1,000 percent. No, that’s not a typo. It, too, may be an undercount, though. The St. Louis Fed said yesterday that next quarter’s unemployment rate will be about 32 percent. Say goodbye to your lovely employer-based health insurance, people.

Confident, well-dressed individuals on TV have begun suggesting that to save the economy—and in this case, with all due respect to Kai Ryssdal, Wall Street is the economy—it may be necessary to lift restrictions and let people go back to working and shopping. Just your usual capitalist trade-off: kill a generation of old, obsolete workers; stave off any further deterioration of the portfolios of high net worth investors. Now we know who’s on those death panels: the Forbes 400.

The Trump campaign is threatening to yank broadcast licenses from TV stations that air an ad in which the only words comes from his own mouth—which is currently babbling about packing the churches for Easter. He’s probably more concerned about packing Mar-a-Lago’s Annual Easter Brunch and Egg Roll.

He’d kill fewer people if he gave up Presidenting and just walked down Fifth Avenue firing a Thompson gun.