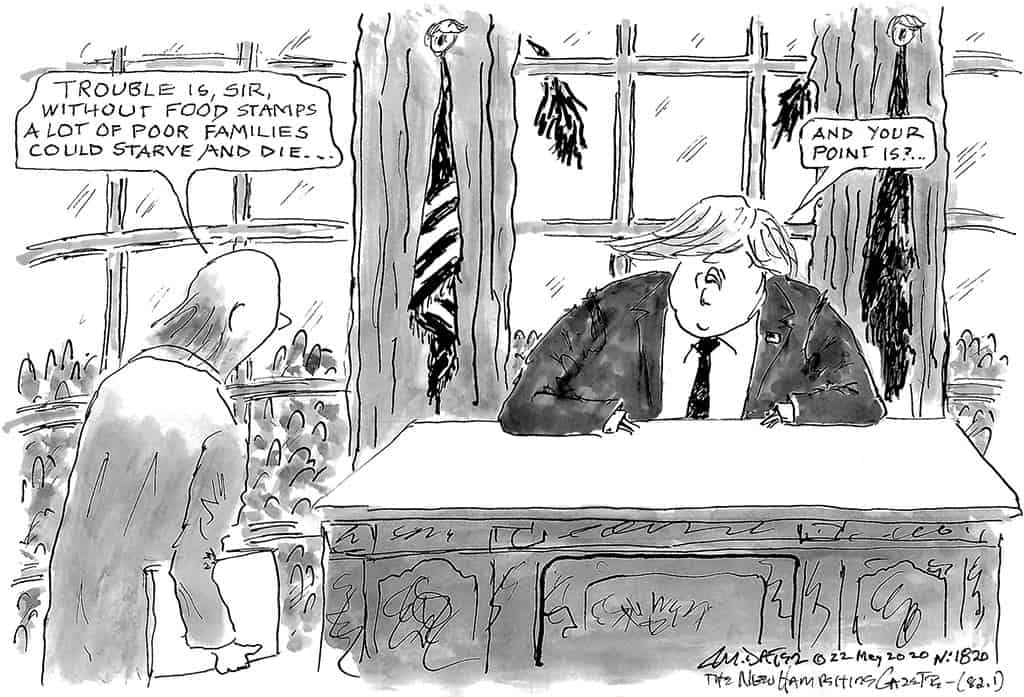 The President and his cult of followers have managed to let a pandemic kill off the equivalent of the population of Nashua. In the process they’ve also managed to stop a humongous economy in its tracks. These things may be bad, but it must be admitted—they are also colossal achievements.

[We regret the necessity of leaving these lacunæ strewn across our columns, but we have neither the financial resources required to defend ourselves against prosecution, nor the political connections which would render such a defense superfluous.—The Ed.]

One of the foremost [Censored by the Legal Department] of the bunch, Secretary of State Mike Pompeo, has been much in the news of late. As is customary with members of this Administration, there are multiple and divergent theories regarding exactly—or even approximately—what he has been doing.

Some puzzles are best solved by looking for what’s missing. In this case, that’s Steve Linick, Inspector General of the State Department. He was fired a week ago today by President Trump, at the behest, according to that notoriously unreliable narrator, of Secretary Pompeo.

As an Obama appointee, Linick has had one strike against him since noon on January 20, 2017. His job, by definition, was to assure that Secretary Pompeo’s operation went by the book. Maybe that made two.

Last November, Linick reported that Department officials had “ended the detail of a career employee in the Office of Policy Planning after significant discussion concerning the employee’s perceived political views, association with former administrations, and perceived national origin, which are non-merit factors that may not be considered in assigning career personnel….” Six months later, though, he still had his job.

Last July, after a whistle-blower filed a complaint, CNN reported that Democrats in Congress had begun investigating “Pompeo and his family’s use of taxpayer-funded Diplomatic Security [which had prompted] agents to lament they are at times viewed as ‘UberEats with guns.’”

While “those personal-seeming tasks might be eye-catching,” according to CNN, “Congressional investigators say the State Department whistleblower told them the bigger issue causing concern among some agents is the question of why Pompeo’s wife, Susan, has her own security detail, assigned to her in 2018, even while she is at home in the United States.” All very interesting, to be sure, but that story made no mention of IG Linick.

The New York Times first linked Linick and the “UberEats with guns” scandal on the Saturday after his firing was announced. The paper said he “had begun an inquiry into Mr. Pompeo’s possible misuse of a political appointee to perform personal tasks for him and his wife,” but also mentioned that the investigation “might be unrelated to the previous allegations.”

Monday, the New York Times hit pay dirt. The Paper of Record™ reported that Linick had been “in the final stages of an investigation into whether the administration had unlawfully declared an ‘emergency’ last year to allow the resumption of weapons sales to Saudi Arabia and the United Arab Emirates for their air war in Yemen.”

Walter Shaub, ex-Director of the Office of Government Ethics, did everyone a favor by draining off the Times’ customarily-thick layer of euphemism, and rephrased the matter in plain English: “firing an investigator in retaliation for probing the legality of shady transfers of weapons to support gruesome atrocities is about as low as you could ever imagine a President going…but here we are at this point and still falling fast.”

Shady arms deals certainly seemed like more substantial grounds for launching a cover-up. On Tuesday, though, NBC News amped up the petty grifting angle, reporting that Pompeo and his wife have hosted at least two dozen “elaborate, unpublicized affairs…in the historic Diplomatic Reception Rooms on the government’s dime.” And what a lavish dime that is. According to their own official website, they are “are among the most beautiful rooms in the world,” providing “a stunning backdrop of American art and architecture…” where the Secretary of State, Vice President, and Members of Cabinet continue to conduct the essential business of diplomacy….”

In this opulent setting, Pompeo and his wife also schmooze with “invitees…associated with media…[who] skew heavily toward conservative TV personalities, with 39 percent of them from Fox News.”

It would be rude to send these folks on their way without some little trinket to keep as a memento, so as “guests depart, usually around 9 p.m., they’re given a journal and a pen as gifts— both custom-embossed with the Madison Dinner logos. The State Department special-ordered hundreds of each in 2018, the pens for $23.75 apiece and the journals for $8, officials said.”

Want so see what those gewgaws look like? Ask our Governor. Maybe he’ll show you.

“Many of those invited are, indeed, global thought leaders whose perspectives could be valuable to America’s top diplomat: foreign ministers from allied countries, senators and prominent historians. But others seem to have little connection to the world of diplomacy, such as country singer Reba McEntire, New Hampshire Gov. Chris Sununu and NASCAR driver Dale Earnhardt Jr.”

The former Prime Minister of Sweden, Carl Bildt, had a column in Tuesday’s Washington Post under the headline, “The post-American world is now on full display.” Describing the recent annual meeting of the World Health Organization, Bildt noted that it “took four hours or so of speeches by ministers from around the world before the United States made its presence felt. Until then, the United States hadn’t even been mentioned.”

The essence of the piece was this: “It is not that the United States has ceased to exist—far from it. But it has left behind any ambition of global leadership and any function as a global inspiration.”

For some this is surely good news—those, for example, whose interactions with the U.S. have come in the form of explosives. For others it is not—those to whom we may have introduced clean water or health care.

Domestically, Bildt’s argument will be refuted most vehemently by those at whose feet it can most surely be laid.

Its truth, to which they are surely blind, would be familiar to Herodotus or Edward Gibbon.

Its irony? Surely you jest.

“On the heels of President Trump’s repeated calls to eliminate Social Security’s funding stream through payroll tax cuts, influential White House advisors are floating a fresh ploy to undermine Americans’ earned benefits. They reportedly propose to offer workers’ $5,000 cash Coronavirus relief payments in exchange for future Social Security retirement benefits. This would be another colossally bad idea from the Trump administration, which seems determined to dismantle Social Security under the guise of helping working people. The truth is: today’s workers will need every penny of their future benefits and should not be duped into postponing their right to claim Social Security when needed for retirement, disability or survivors income.

“Inducing workers to trade their future retirement benefits for temporary cash payments now is akin to similar schemes in recent years from the White House and Congressional Republicans. In 2019, Ivanka Trump, Sen. Marco Rubio (R-Fla.), and others hatched a plan for parents to sacrifice their future Social Security benefits in exchange for paid family leave. These ideas represent a gross misuse of Social Security for purposes unrelated to its core purpose: providing baseline retirement security for American workers.

“President Trump has repeatedly promised “not to touch” Social Security, and one must assume that he is either too disengaged or too disingenuous to reject dangerous policies from his own advisors. The trading-cash-for-retirement-benefits scheme is only the latest in a series of proposed assaults on Social Security, including calls from the administration and congressional Republicans to cut payroll taxes, to raise the retirement age, to adopt stingier cost-of-living adjustments, and slash Social Security Disability Insurance (SSDI) by billions of dollars—along with their insistence that ‘entitlements’ be ‘reformed’ to pay for tax cuts for the wealthy and big corporations. Seniors will not be fooled by the administration’s duplicity. President Trump postures as a leader who will protect Social Security while his appointed foot soldiers continue to hurl bombs at workers’ earned benefits.”

— Max Richtman, president and CEO of the National Committee to Preserve Social Security and Medicare.

The indefatigable Officer Krupke, a stalwart of the Po’Town Division of the Flag Police, has been making his rounds in the South Street Cemetery again. He submitted Exhibit A, seen below on left, a fortnight or two ago.

We apologize for the delay in putting this evidence before the public—the fault is ours, not Officer Krupke’s.

Frankly, we’re disappointed in ourselves, letting down the side whose motto is, “Eternal vigilance is the price of upholding the fetishization of material objects which signify the values of a purported republic in the absence of any perceptible functionality.”

On a more upbeat note, last fortnight, in collaboration with the Flag Police, we published a photo of the pole shown below, carrying the sorry, ragged remnants of a once-proud flag.

As Exhibit B, above on right, clearly shows, that violation of the Flag Code has now been corrected.

Andrew Manuse is a former State Rep. from Derry who has set himself up as Chairman of ReOpenNH.com. It has been promoting those State House protests which have featured mobs of gun-totin,’ God-fearin,’ death-defyin,’ protestors demandin’ their right to, among other things, pack themselves into churches and let God decide whether they—and, by extension and the immutable laws of contagion, the rest of us—should live or die.

We received a press release from this outfit, dated May 14th, in which we were surprised to find a hint that perhaps some on the political right might finally be ready to declare a truce on the issue of abortion.

“On the eve of the governor’s expected ruling to extend his State of Emergency for another 21 days,” it began, “178 Democrats sent a tyrannical letter demanding the governor issue orders requiring all Granite Staters to wear masks in public.” So, so far, all the truculence we’ve come to expect. But wait! What’s this?

A quote attributed to Chairman Manuse then said, “These House Members, clearly enemies of liberty, have hypocritically argued for years, ‘My body, my choice,’ and now they have suddenly become enamored with the same top-down, single-solution approach that Gov. Chris Sununu has been imposing on the state.”

Clearly Manuse et al. are basing their beef with Hereditary Governor Sununu the Lesser on their righteous conviction that he has no right to tell them what to do with their bodies.

There is a difference between these two cases, though. If a woman choses to terminate a pregnancy, there is no discernable effect on Manuse, but if Manuse and his gun-totin’ pals go around in public flaunting their right to exhale the coronavirus, there are potentially-lethal consequences for all of us. 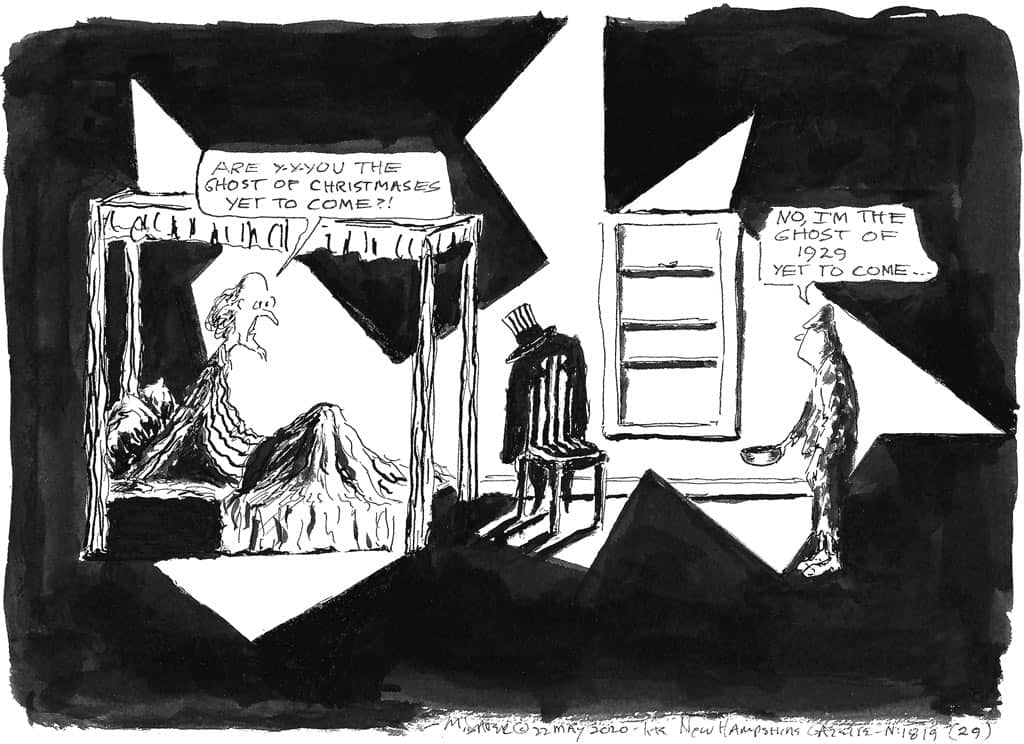 We called City Hall thinking that perhaps we’d get the official line on this year’s observation of Memorial Day, but our heart was just not in it. No one answered anyway. We’re going to go out on a limb here—big journalistic no-no—and declare that, based solely on our own judgment and alleged authority, there will be no throngs of people lining Congress Street on Monday, applauding the marchers in a Memorial Day parade.

Those whom we would remember would surely understand. Some risk is inevitable in life, and some is unavoidable. Some is simply unacceptable.

Next year, if we’re fortunate, we can have a parade in the old style. The ranks will be thinner, though.

Neat, tight bundles of fresh newsprint; a stack of them on a rolling hand truck; volunteers walking their routes; the origami gang gathering and folding…oh, we do miss it.

However, as with the Memorial Day parade, we move on. Fortunately we have these spiffy new digital digs, to which we’re just beginning to become accustomed. Roam around—make yourself at home.