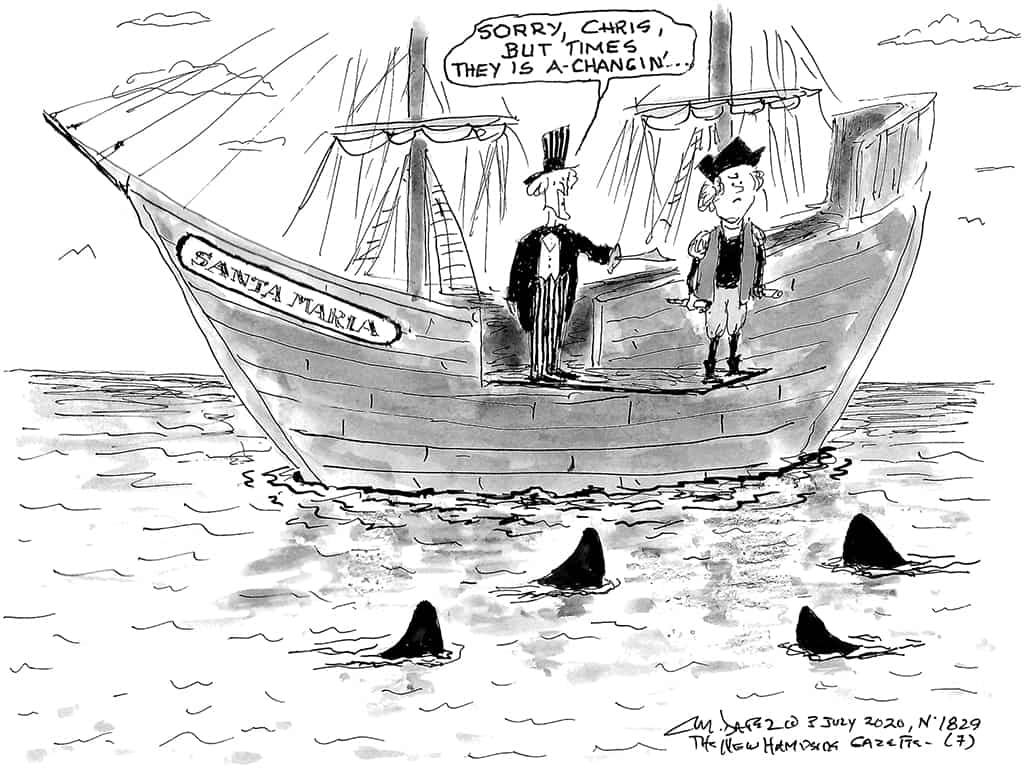 Despite being placed in confinement Thursday morning in the state whose slogan is “Live Free or Die”—by agents of the FBI, Attorney General William Barr, proprietor—Ghislaine Maxwell, as we go to press, still has not been reported to have committed suicide, fatally fallen through the bars from an upper-floor cell onto a busy thoroughfare, or suddenly contracted a case of Covid-19 severe enough to necessitate a medically-induced coma.

Maxwell’s whereabouts have been the subject of intense speculation since the arrest last year, and death in jail, of her former lover and long-time associate, the notorious convicted sexual predator Jeffrey Epstein.

Bill Sweeney, Assistant Director of the FBI’s New York Field Office, explained, “We have been discreetly keeping tabs on Maxwell’s whereabouts…recently we learned she had slithered away to a gorgeous property in New Hampshire continuing to live a life of privilege while her victims live with the trauma inflicted upon them years ago.”

Epstein, a college dropout, was hired in 1974 by Headmaster Donald Barr to teach physics and mathematics at the prestigious Dalton School in New York. Barr—the father of Attorney General Barr—was also an author; he wrote Space Relations (1973), a sci-fi novel featuring teenage female sex slaves. Last year the Miami Herald quoted an alumna saying, “Epstein was considered a little creepy by the girls. I won’t say that the girls didn’t like him. But they thought he was odd.”

Fired from Dalton in 1976 for “poor performance,” presumably still creepy and lacking credentials, nevertheless Epstein landed a job as a low-level junior assistant with the global financial firm Bear Stearns; its CEO was the father of a former female student. Four years later he became a limited partner.

His personal conduct led, in 2007, to a 53-page indictment on charges of sexually abusing teenage girls. Despite the heft of the charges, Epstein was able, with the help of Dershowitz, to negotiate a plea deal which “essentially shut down an ongoing FBI probe into whether there were more victims and other powerful people who took part in Epstein’s sex crimes,” according to the Miami Herald. The plea deal contained a couple of curious stipulations. It was to be kept secret from Epstein’s victims, and his co-conspirators, including Ghislaine Maxwell, would be granted immunity from prosecution. The deal was negotiated by U.S. Attorney Alex Acosta, whom President Trump later appointed as his Secretary of Labor.

Apparently Maxwell’s immunity is no longer operative. Facing charges that could keep her behind bars until she’s 93, she could still get a break—if she lives long enough to talk.

’Be A Hot Time in the Gulag Tonight

Best known formerly as the site where the narodnik Ivan Babushkin was exiled and imprisoned 115 years ago, Verkhoyansk, Siberia is again in the news. The temperature there reached 100.4° on June 27th, according to the Irish newspaper Independent.

Last June the Siberian arctic saw unprecedented wildfire activity. This June has now surpassed last year’s. The tundra has been so dry in places that vegetation which smoldered under the winter snowpack has re-ignited, resulting in what are called “zombie fires.”

From 2003 through 2018, fires in the arctic released an average of 1.8 million metric tons of carbon into the atmosphere annually. In 2019 that figure jumped to 14.5 million tons, according to figures published at BloombergGreen. This year it went up to 16.3.

A report on WOKQ called it “a brilliant plan.” Brilliant or not, it certainly had a New Hampshire flavor to it.

As originally announced, said plan was to help support the town’s restaurants, retail shops, and arts community by converting the top two floors of the otherwise-empty Foundry Place Garage into a pop-up restaurant and beer garden. The idea probably sprang fully-formed from the head of a driver cruising past the New Hampshire Liquor and Wine Outlet on the Rt. 1 traffic circle. Cars + alcohol—what could go wrong? It’s the New Hampshire Way.

The Hedge Fund-Owned Local Daily reported on Wednesday, however, that the venue has been changed to the Bridge Street parking lot. Specific details on the reason(s) for that change were…well, not really supplied.

According to Elizabeth Dinan—one of the few, the proud, the Portsmouth Herald reporters actually present in the eponymous arts mecca—Portsmouth Citizen Response Task Force Chair Russ Grazier said “after discussions with city staff, it was decided the parking garage roof was not the best location for the events and city officials offered use of the Bridge Street parking lot, with some adjacent space on Bridge Street.”

Since the Bridge Street lot is down at ground level, whatever noise does end up being generated by this enterprise will lack the carrying power it would have had if were coming from the top of the garage.

Whatever the merit of this idea, it’s a good thing the Citizen Response Task Force exists. Somebody’s got to figure out a way to keep this town afloat.

It’s all well and good to have a zillion restaurants, retail shops, theaters, galleries, historic houses, membership research libraries, archaic newspapers, and other miscellaneous peculiarities to lure free-spending tourists. Up until, oh, say, last week, it even appeared that us Homo sapiens might be getting away with the whole “gradual re-opening” thing. Then the consequences of Memorial Day started to set in.

Now, instead of happy claptrap from the MAGA-head, we’re getting truly dire warnings from epidemiologists. The nation’s catastrophically stupid response to the coronavirus has put our tourist economy in what we’ll just call a rather delicate position.

That didn’t prevent WOKQ’s Chio Acosta from closing his piece on an upbeat note, though: “The idea of pop-up restaurants and shops is really a stroke of genius and shows how innovative Americans can be.”

Somewhat like the aforementioned Chio Acosta, we do our best to maintain a relentlessly upbeat attitude. And why should we not? We have survived a Revolution, a Civil War, a Great War, an influenza pandemic a century ago, a Great Depression, another damn Great War by another name, blah blah blah, &c., &c.—and yet we are still here. To what can we attribute our singular longevity?

we decline to accept so simple an answer as fate or divine intervention.

Has it been due, then, to an unbroken succession of perspicacious proprietors? Not hardly. We’ve had some real nutballs at the head of this operation, quite possibly including the incumbent.

Our working hypothesis for our continued existence is threefold: dumb luck, the universe’s well-documented tendency to randomly produce peculiar outcomes, and, at least since we attained seniority in our field in 1839, the innate human reluctance to let old things die.

This latter factor is the only one over which we have any control. It behooves us to move cautiously. Current circumstances are more chaotic—and thus more threatening to our survival—than anything we’ve seen since the Revolution.

In the 21 years since we re-emerged in the city of our birth, we have developed a modus operandi which has relied on loyal and energetic volunteers fanning out through a densely built-up area packed with myriad small businesses, where they put down small piles of free papers which were then picked up by a bustling flow of passing pedestrians.

Our physical form—a svelte one-ounce packet of newsprint—cried out to be mailed. To our great good fortune, a small, amiable team of volunteers has enjoyed the experience of gathering around a table and preparing papers for the Post Office.

While the Administration would surely encourage us to resume both these methods of distribution, we suspect, that competent epidemiologists would be more circumspect. We’ll go with them.