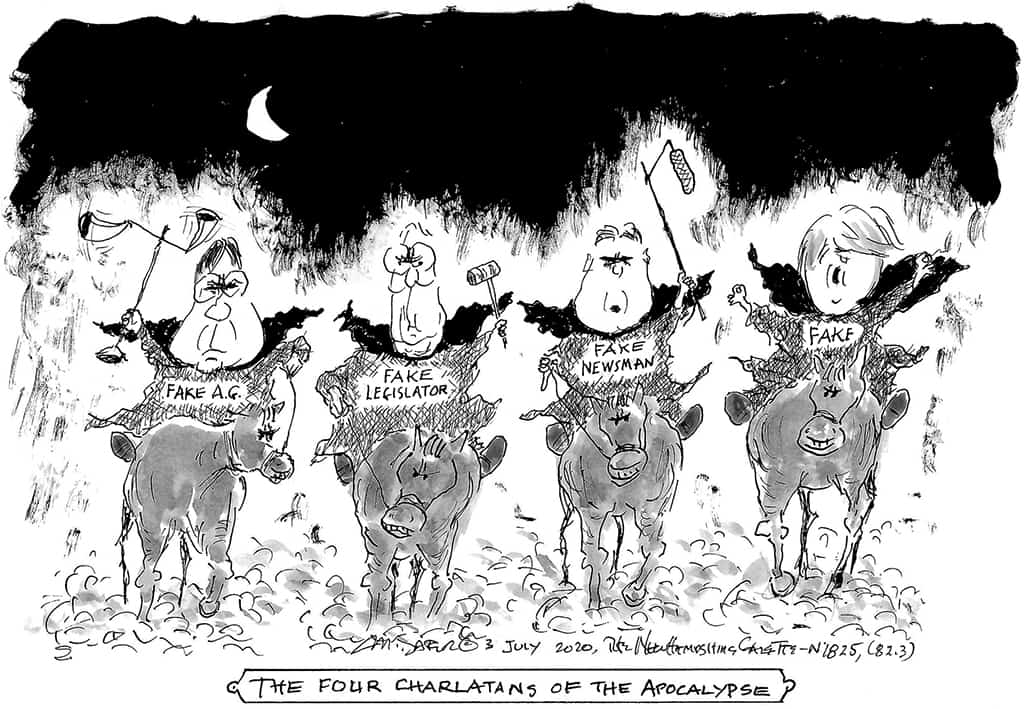 Well, let’s see here…2020, subtract 1776…yup, looks like tomorrow, the Fourth of July, will mark this country’s 244th birthday. How shall we celebrate?

We understand that El Presidente will be visiting South Dakota. Flying in on Air Force One is his subtle way of letting us know that he thinks his face belongs on Mount Rushmore. After all, what has Lincoln done for anyone lately?

It pains us to say this, but in a way he’s right. After all, the so-called “Shrine of Democracy” is a grandiose monument created by a monomaniacal racist on land stolen by the government from the Sioux.

Some Sioux have said they want their sacred Black Hills returned and those huge white faces gone. On the Fourth, the Air Force will be sending an array of military aircraft overhead: fighters, bombers, and whatnot. If the Commander-in-Chief happened to be standing under Washington’s big nose, and…. No. Never mind. Pay no attention to the lingering fantasies of a lowly former enlisted person from a bygone age.

It must be said, though, that there are a lot of people connected to the uniformed components of our military-industrial complex who are rather peeved with the C-in-C. Not unreasonably, either.

Every day our much-vaunted “Intelligence Community” sifts through the most vital information it has about our national security and distills it into what is called the President’s Daily Brief, or PDB. Considering his role as Chief Executive, and dividing our annual intelligence budget by 365, one could argue that the PDB costs $234 million every day. According to credible news reports, on February 27th the PDB included the startling fact that Russia has been paying bounties to Taliban fighters for killing member of the U.S. armed forces. The President didn’t read it though. We know this because he never does.

We also know what he did do. He met with some of his Black supporters, including a duo calling themselves Diamond & Silk. It was a productive meeting. A photograph was taken showing the President in the Oval Office at the Resolute desk, hands piously clasped before him as if in prayer, as a dozen or so Black supporters lay their hands upon him as if invoking God’s blessing. Lord knows that couldn’t hurt, but we have doubts about efficacy. The re-election campaign certainly gained a valuable asset, though. Trump also met that day with actors Dean Cain and Kristy Swanson. They are working up a stage production based on emails between a couple of FBI agents. If Cain or Swanson know anything about national security, that would be news to us. Their production, however, titled “FBI Lovebirds,” will surely gratify the President’s urge to glorify what he sees as his own martyrdom.

As for the little matter of Russians paying the Taliban to kill American troops, the President has done nothing, so far as anyone can tell—nothing but lie, that is. That goes without saying, and yet, for the record, we feel compelled to make up for other news organizations, which rarely make that point clearly enough.

In the past—the recent past—the bar for Presidential behavior has been held rather high. Wear a suit of a particular color or listen to the wrong pastor and you’d never hear the end of it. That historical error seems to have spurred an overcorrection. Nowadays the President’s more ardent supporters expect him to lie. The more blatant and puerile the lie, the more amusing they find it.

They will settle, though, for just about any audible sound coming from his strangely fish-like lips. Recently Sean Hannity, whose years of servility to the Republican agenda have earned him the coveted top spot at the Faux News Propaganda channel, asked Trump what’s at stake in this election and what were his top priority items for a second term.

“Well,” Trump responded, clearly enough, but then immediately left behind any rails of coherence: “one of the things that will be really great, you know the word experience is still good. I always say talent is more important than experience. I’ve always said that. But the word experience is a very important word. It’s an—a very important meaning. I never did this before. I never slept over in Washington. I was in Washington, I think, 17 times. All of a sudden, I’m President of the United States. You know the story. I’m riding down Pennsylvania Avenue with our First Lady and I say, ‘This is great.’ But I didn’t know very many people in Washington. It wasn’t my thing. I was from Manhattan, from New York. Now I know everybody, and I have great people in the Administration. You make some mistakes. Like, you know, an idiot like Bolton. All he wanted to do was drop bombs on everybody. You don’t have to drop bombs on everybody. You don’t have to kill people.”

A responsible interviewer—or any human with a heart—would have followed up by asking, “Mr. President, are you feeling all right? Do you feel a sudden numbness or weakness on one side of your body? Is your vision OK?”

This gets to the reason why it is so important to have the worst man imaginable in the Oval Office. As the Rector of St. Philip’s Episcopal Church in Tucson has said, he’s “an awful man, waving a book he hasn’t read, in front of a church he doesn’t attend, invoking laws he doesn’t understand, against fellow Americans he sees as enemies, wielding a military he dodged serving, to protect power he gained via accepting foreign interference, exploiting fear and anger he loves to stoke, after failing to address a pandemic he was warned about, and building it all on a bed of constant lies and childish inanity.”

Not exactly flattering, but undeniably true. Letting a moral leper run the country into the ground is the clearest possible way to demonstrate the central pillar of Attorney General Barr’s interpretation of the original intent of the Founding Fathers—which is that under the U.S. Constitution, “King” is spelled “President.”