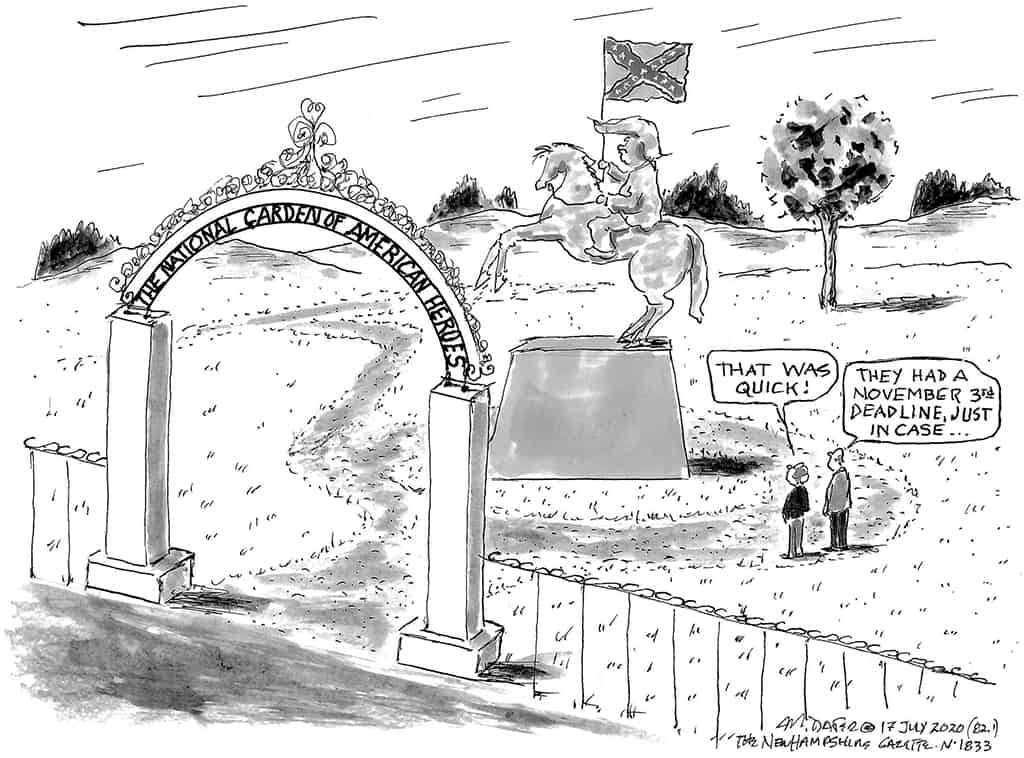 A week ago today the Department of Health and Human Services posted a revised document online. In a certain narrow sense this was perfectly normal—even traditional. Friday has always been considered the optimal day for a beleaguered criminal Administration to conduct any low act of skulduggery.

Hospitals had been sending all their Covid-19 stats to the Centers for Disease Control and Prevention [CDC]. The logic of this arrangement would seem to be clear, even to a person of limited intellect—an increasingly important consideration these days.

Under the order which went into effect Wednesday, the CDC will no longer be getting those stats. Instead they will go to its parent agency, the Department of Health and Human Services [HHS], which is run by Alex Azar.†

Azar was not the President’s first choice to head HHS. That was Tom Price, who lasted only seven months, back in those quaint days when Congress could still muster a little outrage over blatant misbehavior. He seemed to think the Pentagon operated its aircraft like Über for Cabinet officials.

Azar has the sort of résumé, though, that this Administration sees as a qualification. During his five years as President of Eli Lilly, the company tripled its price for insulin, for which the patent expired more than 70 years ago.

In January, when the first U.S. case of Covid-19 was announced, Azar appeared on Fox News to reassure the public. The Administration had developed a Covid-19 test, he said, and would “be spreading [it] around the country so that we are able to do rapid testing.” That test was a failure, as things turned out; soon Covid-19 was “spreading around the country.”

In April, Azar fired Rick Bright, the director of the Biomedical Advanced Research and Development Authority [BARDA], which develops vaccines, therapeutics, and tests for coronaviruses. Bright had resisted the Administration’s plan to “flood” New York and New Jersey with hydroxychloroquine produced in plants in India and Pakistan which had not been inspected by the FDA. Bright, according to StatNews, is suing to get his old job back. His suit alleges that the administration’s failure to curb the pandemic is due to general ineptitude and “cronyism between HHS officials and industry.” In other words, it’s SOP.

Direct control over the Covid-19 data appears to have fallen to Azar’s Chief of Staff, Brian Harrison, who, according to news reports, has been acting as HHS’s main coordinator for response to the coronavirus. Acting is right—the 37-year old former labradoodle breeder has had no formal education in public health or other related fields.

Dr. Anthony Fauci, who has been the Director the National Institute of Allergy and Infectious Diseases for 35 years, appears to be next in line for the axe. While we cannot say for certain why Fauci incurred the Administration’s wrath, the public does seems to have concluded that he’s competent and truthful; so, it’s probably just jealousy.

On Tuesday, USA Today ran an editorial calling Fauci “a national treasure,” and warning that muzzling him would be hazardous. As if to illustrate the hazards of seeking objectivity by taking the “on-the-other-hand” approach, the paper paired its editorial with an op-ed by Peter Navarro.

“Dr. Anthony Fauci has a good bedside manner with the public,” it began, “but he has been wrong about everything I have interacted with him on.” Since Navarro is both an economist and the Administration’s top trade advisor, it’s redundantly superfluous to specify that his 270-word op-ed was composed almost entirely of errors.

A contrite USA Today published a note saying, “Navarro’s op-ed did not meet USA Today’s fact-checking standards.” The paper was being too kind to itself. As Kevin Drum points out, “It’s not that the links [to sources which Navarro claims back him up] just go to dubious sources, they literally go to sources that say the opposite of what Navarro claims.”

Because this is 2020, and because it is Administration policy to lie about everything all of the time, there was some controversy Wednesday—probably forgotten by now—over the question of whether Navarro’s attack on Fauci was a rogue effort, or part of an official Administration campaign to oust him.

Let us pause here briefly to recall that we’re talking about the possible removal of one of the nation’s best hopes against an already devastating national health catastrophe.

It’s been said that incoherence is part of the Administration’s cunning plan. That implies that the Administration is led by a strategic genius. A devastating book by our President’s own niece, who just happens to be a clinical psychologist, has somehow made it past our Republican judicial system and presented us with a personal and professional X-ray of the man’s mental state.

Terrifying as it is to consider, the man with the nuclear football at his side—and the authority to use it—is fully as deranged as he appears. It’s called the Dunning-Kruger effect: his brain is so broken that he cannot understand that it doesn’t work.

He is sapient enough, though, to get the sense that he might lose the coming election. That drives him to ever more desperate measures, all of which make things worse. It’s a vicious cycle of stupidity—a Dunning-Kruger spiral.

All we can do at this point is to quote Dan Rather: “Courage.”

* Younger readers may not be familiar with this term. Before the war—the one in which we mistakenly thought we had defeated fascism—it was common for unrelated persons of modest means to live in boarding houses. Residents ate communally at large tables; particularly long-armed or shameless residents who gorged themselves at the expense of others were said to have a “boarding house reach.” Such ideologically unsound living arrangements have since been nearly eradicated.

† Alex Azar is not to be confused with another Cabinet official with a somewhat similar name. Alexander Acosta, now the Secretary of Labor, has been in the news lately for his actions as U.S. Attorney for the Southern District of Florida. In 2007, the late Jeffrey Epstein was facing charges that he had sexually abused dozens of minors. Acosta let Epstein’s lawyers dictate a secret—and thus illegal—plea deal. Epstein got off with a slap on the wrist.