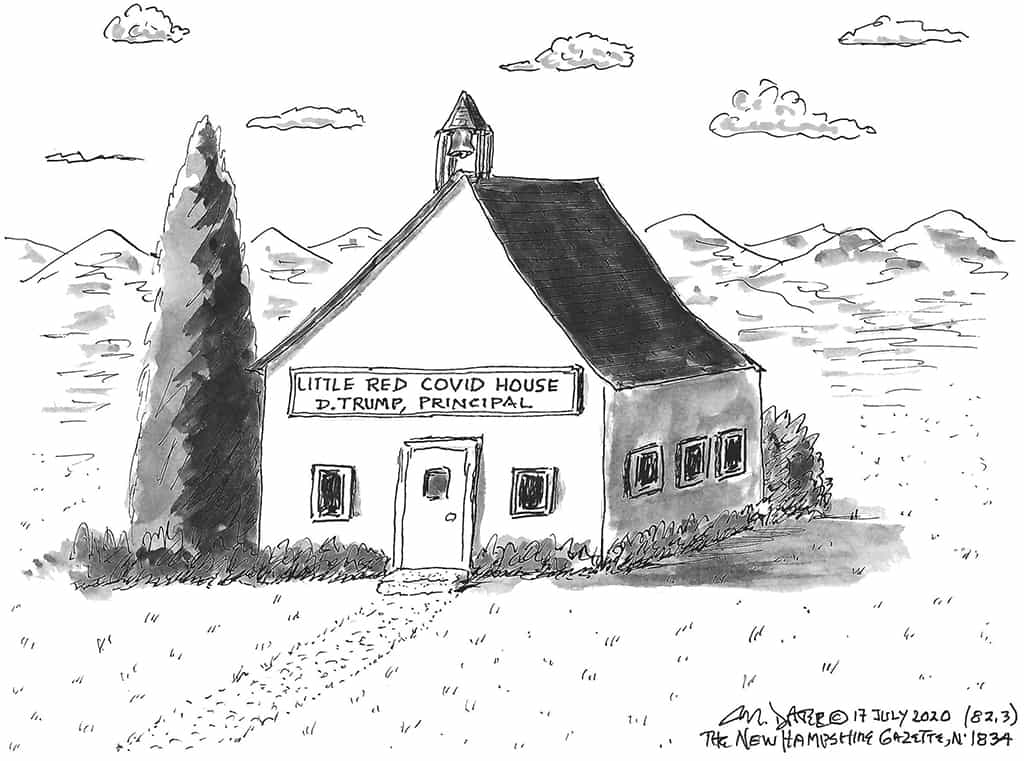 A week ago—on the same “Hide It Friday” the Administration did its bureaucratic shuffle to obscure the evidence of its criminal negligence on the Covid-19 front—the untreated mental patient also known as our Commander-in-Chief commuted the sentence of his longtime crony Roger Stone.

After a lifetime of well documented, politically oriented malign behavior, Stone had managed to finally get his Nixon-tattooed self charged, convicted, and sentenced to serve between seven and nine years in prison. Throughout it all, ever true to the criminal code, Stone swore he’d never rat out his boss, and smugly waited to get sprung. And now he has been.

Stone and the late, unlamented Jeffrey Epstein are both avatars of a fundamental principal of our justice system, such as it is: in this great and democratic nation, we are all unequal under the law. Perhaps that’s the guiding principle behind the existence of such figures. They drive home to us ordinary people the fact that there is a certain brand of justice that is too expensive a commodity for the likes of us.

Most people with modest incomes know all too well that we can just barely afford to get away with being law abiding. Meanwhile we see these types, for whom money is no object, getting away with shenanigans the likes of which few of us would dare attempt, even if we were so inclined. Top-tier justice is too rare a commodity.

It’s not as if the average person could ever earn enough to afford that kind of lawyer. That would be like pulling yourself up by your bootstraps—which, for the record, is impossible because doing so would violate the fundamental laws of physics.

[This could be a misunderstanding, or the first sign of a true breakdown in law and order. It puts us in mind, though, of the breaking news we reported in 1775 from Lexington and Concord. – The Ed.]

Willamette Weekly quoted Oregon Gov. Kate Brown saying yesterday, “I told acting Secretary [of Homeland Security] Wolf that the federal government should remove all federal officers from our streets. His response showed me he is on a mission to provoke confrontation for political purposes.” Wolf tweeted this morning, “I offered @DHSgov support to help locally address the situation that’s going on in Portland, and their only response was: please pack up and go home. That’s just not going to happen on my watch.” Meanwhile protestors are being grabbed off the streets by unidentified men in uniform and taken away in unmarked vehicles.

Vote Without Risking Your Life!

Overcoming any temptation to use his VETO stamp, Governor Sununu signed HB 1266 into law this morning. That’s good news for voters, and for poll workers, too.

Now New Hampshire voters can file a single form requesting absentee ballots for both the primary and general elections, and check a box indicating that the reason for the request is “concerns with Covid-19.”

OpenDemocracyNH, which has been working hard to support this measure, has full instructions for requesting absentee ballots at https://www.opendemocracynh.org/absentee.

Postal workers and their allies in Congress are vowing to fight back after the new head of the U.S. Postal Service—a major donor to President Donald Trump and the Republican Party—moved this week to impose sweeping changes to the popular government agency as it faces a financial crisis manufactured by lawmakers and exacerbated by the Covid-19 pandemic.

The Washington Post reported late Tuesday that Postmaster General (PMG) Louis DeJoy, who took charge last month, issued memos announcing “major operational changes” to the U.S.P.S “that could slow down mail delivery, warning employees the agency would not survive unless it made ‘difficult’ changes to cut costs.”

“Analysts say the documents present a stark reimagining of the U.S.P.S that could chase away customers—especially if the White House gets the steep package rate increases it wants—and put the already beleaguered agency in deeper financial peril as private-sector competitors embark on hiring sprees to build out their own delivery networks,” the Post noted.

According to the internal U.S.P.S memos obtained by the Post, “DeJoy told employees to leave mail behind at distribution centers if it delayed letter carriers from their routes,” a change critics said could threaten access to absentee ballots at a time when vote-by-mail is more important than ever.

“If the plants run late, they will keep the mail for the next day,” reads a document titled, “New PMG’s expectations and plan.”

“The deliberate delaying of Americans’ mail delivery would be a stunning act of sabotage against our Postal Service,” Rep. Bill Pascrell, Jr. (D-N.J.) said in a statement. “If these reports are accurate, Trump and his cronies are openly seeking to destroy the Post Office during the worst public health crisis in a century.”

“With our states now reliant on mail voting to continue elections during the pandemic, the destabilizing of the Post Office is a direct attack on American democracy itself,” Pascrell added. “It has been 59 days since the House passed $25 billion to keep U.S.P.S alive. The Senate must pass it now. Democracy hangs in the balance.”

With the U.S.P.S at risk of completely running out of cash by the end of September without an infusion of emergency funding, postal workers and members of Congress have warned that the Trump administration could attempt to exploit the agency’s financial struggles to advance the longstanding right-wing goal of privatizing U.S.P.S.

In March, Congress approved a $10 billion emergency U.S.P.S loan, but the Treasury Department has yet to release the funds as the Trump administration attempts to use the money as leverage to force changes to the agency’s finances and operations.

Mark Dimondstein, president of the 200,000-member American Postal Workers Union, said in response to the Post’s reporting that his organization will vigorously oppose the new operational changes sought by DeJoy.

U.S. Mail Not for Sale, a worker-led coalition dedicated to protecting the Postal Service from right-wing privatization efforts, is urging Americans to take part in a July 23 call-in day of action urging the Senate to approve desperately needed financial relief for U.S.P.S.

“Our movement is growing. Together we can save the Post Office and convince lawmakers to do their jobs,” the coalition said. “Multiple bills have been introduced that would provide $25 billion in Covid-19 related relief for the Postal Service. The Senate comes back from recess in less than two weeks’ time. We need to keep up the pressure to make them vote to end this crisis.”

The popular walking tours presented by the Black Heritage Trail of New Hampshire will return this summer—small groups, masked, and socially distanced of course—covering topics from how slavery created an economic engine for our country, to how enslaved and freemen served onboard ships sailing from Portsmouth, and how Ona Marie Judge escaped enslavement by George and Martha Washington and found freedom in Portsmouth.

According to JerriAnne Boggis, Executive Director of the Black Heritage Trail, “With the protests that have followed the death of George Floyd, we have seen renewed interest in our shared American history—which our walking tours and our guides have been bringing to life each summer and fall since 2016, and before that, as the Portsmouth Black Heritage Trail. We hope that our lineup of eight Portsmouth tours and three statewide tours will continue to provide an opportunity for all of us to engage in deeper conversations that will lead to building more inclusive and just communities today. It is in this spirit we invite you to join us on our walking tours.”

About the Sankofa Tours

Africans have contributed to the economic and cultural fabric of New Hampshire since the 1600s. More than 700 Blacks lived in Portsmouth by the time of the Revolution, many of them caught up as chattel in the lucrative Northern slave market while others were part of a marginalized community of free people. Experience the history and cultural roots of the early African Community in Portsmouth dating from the early 1600s. Tour-goers will trace their journeys as they pass by the elegant and stately homes of some of New Hampshire’s most prominent families, and hear their stories from knowledgeable and experienced tour guides. With its distinctive bronze plaques that identify this community, from its colonial-era African Burying Ground to the modern Civil Rights Movement, the Portsmouth Trail serves as a model across the country on what it means to raise public awareness and appreciation for a region not known for its Black history.

Sankofa is an African word from the Akan tribe in Ghana which means “going back to the past to recover what was lost.”

Unless otherwise noted in the description, tours meet at BHTNH’s office at 222 Court Street.

Due to the COVID-19 Pandemic, group size is limited to five people per tour, 10 people per tour if they are all from the same family or household. All participants must wear masks; tour guides will wear face shields and use microphones.

All participants are asked to pre-register online for a tour at blackheritagetrailnh.org/sankofa-guided-walking-tours/.

If space is available, persons who have not pre-registered may register onsite.

Institutionalized slavery in Colonial America provided immense wealth and material culture to many European immigrants and their descendants in the Americas, as Portsmouth’s house museums bear witness. This tour brings into focus an economic system dependent upon the international slave trade, with its constant supply of kidnapped, unpaid African workers and their descendants, who, against the odds, created one of this country’s oldest Black communities.

Ain’t She A Woman: Let me tell you her story

Can you imagine the hustle and bustle of a prosperous Colonial seaport town? This tour invites you to discover the world of early Portsmouth from the perspective of African American women. In spite of enslavement and hardship, these women fought for freedom, defied a sitting president, and educated generations of children to follow. Hear their stories about love and faith and struggle, as you walk past the homes of the families who enslaved them.

Thirst for Freedom: From New Hampshire’s’s Slave Trade to its Civil Rights Movement

Colonial Portsmouth newspapers testify to the local slave trade, runaways, abolitionists and anti-abolitionist activities, followed by conflicting opinions of the Civil War. In the 20th century, the legacy of that early history was reflected in news about de facto segregation in housing and public places. This tour includes many of those historic landmarks from the early nineteenth through the twentieth centuries.

Seafaring was one of the most significant occupations among both enslaved and free Black men between 1740 and 1865. Black seamen sailed on whalers, warships, and privateers. Some were enslaved and forced to work at sea, but by 1800 most seamen were free to seek adventure and economic opportunity aboard ship. On this tour, you will meet Jack Staines, husband to Ona Judge Staines, who escaped the household of the President and Martha Washington, and will experience Portsmouth through his life.