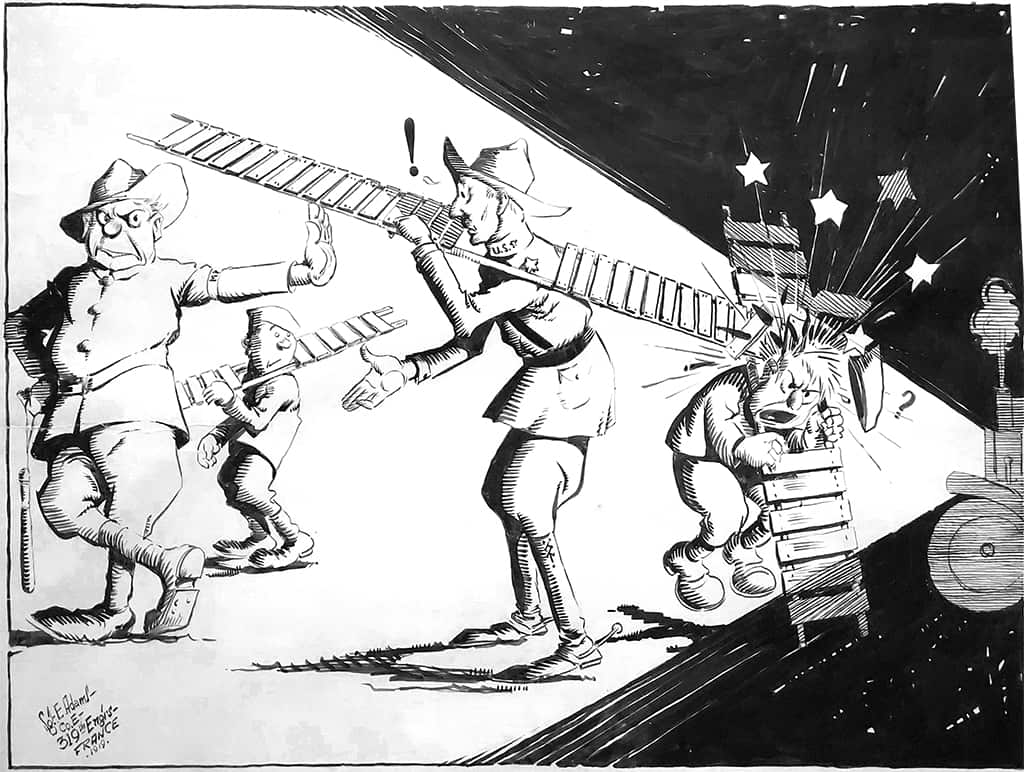 I went through Marine Corps boot camp at Parris Island, South Carolina, in the summer of 1966. We learned all sorts of things that summer, but one thing we learned was the names of the two Marines who had each won not one, but two Medals of Honor: Dan Daly and Smedley Butler.

Butler would have received three Medals of Honor if the award had been available to officers during the Boxer Rebellion in 1900 China. Every enlisted man on a patrol he led as a teenaged lieutenant received one, but he was instead awarded the Marine Corps Brevet Medal, the highest decoration for bravery then available to commissioned officers.

But our drill instructors didn’t tell us about the book Butler wrote called War Is a Racket. And they didn’t teach us what Butler came to believe about himself:

“I spent 33 years and four months in active military service and during that period I spent most of my time as a high class muscle man for Big Business, for Wall Street and the bankers. In short, I was a racketeer, a gangster for capitalism. I helped make Mexico and especially Tampico safe for American oil interests in 1914. I helped make Haiti and Cuba a decent place for the National City Bank boys to collect revenues in. I helped in the raping of half a dozen Central American republics for the benefit of Wall Street. I helped purify Nicaragua for the International Banking House of Brown Brothers in 1902-1912. I brought light to the Dominican Republic for the American sugar interests in 1916. I helped make Honduras right for the American fruit companies in 1903. In China in 1927 I helped see to it that Standard Oil went on its way unmolested. Looking back on it, I might have given Al Capone a few hints. The best he could do was to operate his racket in three districts. I operated on three continents.”

I only began to learn the whole story of Smedley Darlington Butler’s remarkable life during the Reagan Wars against the peasants of Central America in the 1980s, a part of the world where Butler had spent much of his career in the first 30 years of the 20th century.

Ten years into my 18-year stay, Joe got an e-mail from a 1969 graduate named Fred Housel who had been a “Lifer” at THS, and who had stumbled by accident upon Butler’s story while doing unrelated research. Fred asked Joe, “How could I spend 13 years at Haverford and never have heard a word about Smedley Butler?” Joe’s reply was, “You should talk to Bill Ehrhart. He’s a big Smedley Butler fan.”

The answer to Fred’s question was easy: after Butler retired from the Corps in the early 1930s, when he began speaking out against what he saw as unjustifiable foreign interventions and what today we would call “the military-industrial complex,” the then rich white Republican Philadelphia Main Line clientele of the Haverford School deemed Butler a traitor to “his class,” and wrote him out of the school’s history. He simply ceased to be.

Until I arrived, that is. From the first day I began teaching there, I had a large poster of Butler hanging in my classroom. Along with a full-length photograph of Butler, the poster included his famous “racketeer for capitalism” quote, which originally appeared in Common Sense, a magazine published by socialists in the tradition of Eugene Debs and Robert La Follette, in November 1935. Below the poster, I added my own sign identifying him as a Haverford School alumnus.

Fred was not pleased to learn that his alma mater had erased Butler from its institutional conscience, and made a substantial donation to the school in return for resurrecting Butler’s connection to the school. My classroom was dedicated to Butler’s memory, and now bears a plaque attesting to this. An oil painting of Butler in uniform, painted by a student, now hangs just outside the upper school admissions office. And on the campus, circling one of the trees, is the Smedley Butler Bench, which carries six brass plates reading:

Panel 2
A native of West Chester, Pennsylvania,
the son of a Congressman,
Butler was captain of the Haverford School’s
baseball team and quarterback of the football team.
Not yet 17, he enlisted in the Marines in 1898
without waiting for graduation,
but was nevertheless awarded his diploma.

Panel 3
During a career spanning over 33 years,
Butler rose from 2nd lieutenant to major general.
He served in the U.S., the Philippines, China,
Panama, Honduras, Nicaragua, Mexico, Haiti,
Cuba, the Dominican Republic and France,
earning not one but two Medals of Honor,
the Marine Corps Brevet Medal,
and both the Army and Navy
Distinguished Service Medals.

Panel 4
From January 1924 through December 1925,
Butler took a leave of absence from the Corps
to serve as Philadelphia’s Director of Public Safety.
Charged with enforcing prohibition
and rooting out municipal corruption,
he later said: “Cleaning up Philadelphia
was worse than any battle I was ever in.”

Panel 5
After retiring from the Corps in 1931,
Butler became an advocate for veterans
and a critic of American military adventurism.
In 1932, he supported the Great War “Bonus Marchers.”
In a 1935 essay he titled War Is a Racket,
he described himself as having been
“a muscleman for Big Business,”
“a racketeer,” and “a gangster for capitalism.”

Butler earned the nickname “Maverick Marine” because repeatedly found himself in trouble with his superiors in the military and the government; he had no patience with bureaucracy, red tape, or armchair strategists, and always put the welfare of the men under his command before everything else.

In the Philippines, early in his career, he was nearly cashiered for defying orders and commandeering a Navy tug to deliver food and supplies to his isolated command, largely dismantling the tug in order to build a pier from which to offload his cargo once he’d returned to the isolated island where his men were stationed.

Awarded a Medal of Honor in Mexico in 1914 that he did not feel he deserved, he was told that he had to accept it and wear it, or face court-martial.

Sent to France in 1918, but denied the combat command he desperately wanted, he was assigned instead to command a transient camp for soldiers coming and going between the States and the trenches on the Western Front. Appalled by the unsanitary living conditions at the camp, and refused permission to obtain adequate supplies to upgrade the camp’s facilities, he organized a work party that raided a government warehouse in broad daylight and “liberated” the duckboards, shovels, and tents he needed, thus earning him the nickname “General Duckboard.”

W. D. Ehrhart served in the  U.S. Marine Corps, 1966-69, including service in Vietnam, achieving the rank of sergeant, and receiving the Purple Heart Medal, Navy Combat Action Ribbon, and a 1st Marine Division Commanding General’s Commendation. He is author of Vietnam-Perkasie: A Combat Marine Memoir (McFarland, 1983) and Thank You for Your Service: Collected Poems (McFarland, 2019).

2 thoughts on “Smedley Darlington Butler: What a True American Hero Looks Like”