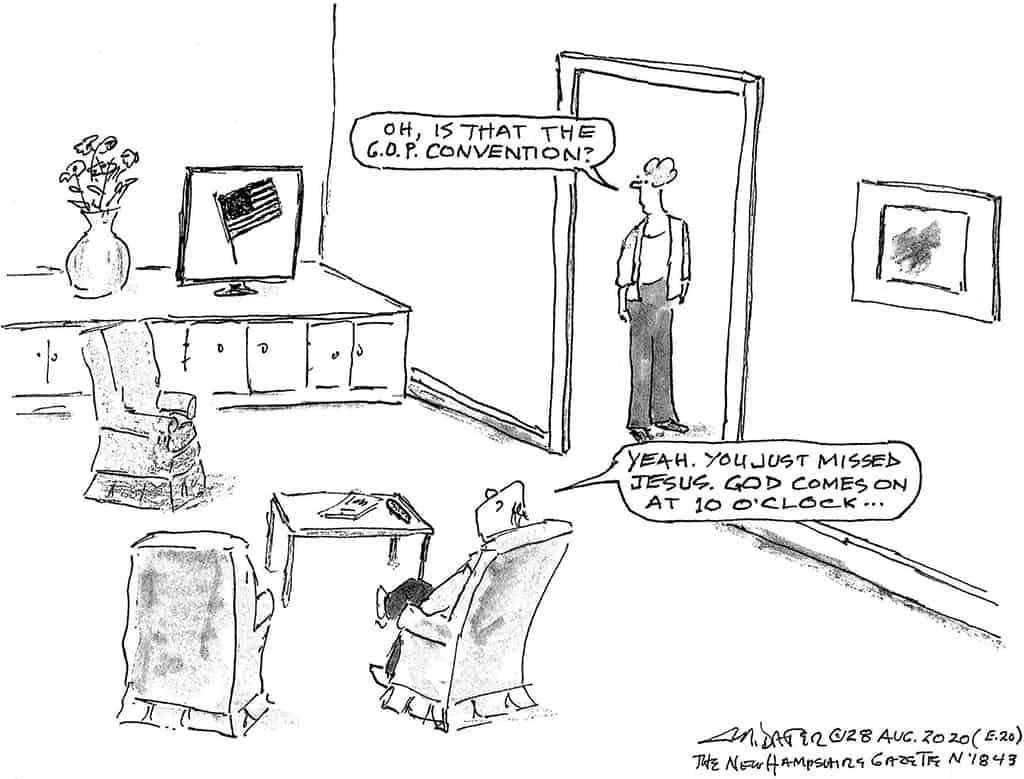 …the alleged President saying that “We are going to win four more years. And then after that we’ll go for another four years, because they spied on my campaign.”?

…the House candidate who accused the Obama administration of using the MS-13 gang to commit murders—without losing her backing from the GOP?

…the investigation by a Congressional committee into efforts by top appointees to destroy the Postal Service?

…the alleged President saying “we moved the capital of Israel to Jerusalem…for the Evangelicals.”?

…the new study warning that the Greenland ice sheet may have gone past the point of no return?

…the derecho that hit Iowa, flattening 14 million acres of crops with 140-mph winds?

…the sex-scandal arrest of a Florida sheriff weeks after he endorsed Donald Trump?

…the Democrats putting five Republicans on the program at their convention?

…the discovery of the 2007 fan letter Donald Trump sent to Vladimir Putin?

…the heat wave in California, without electricity, but with a fire tornado?

So much chaos, so little space—and so much for our attempt to meet the challenge of these times with a new, more methodical approach.

Just from glancing at three days worth of notes, the column at left is full to overflowing. We have succumbed to Newton’s Second Law of Thermodynamics; entropy defeated us without even trying. No wonder this country is falling apart—it’s not just fighting entropy, it’s up against Trump and the Republican National Committee, too!

Our grandiose dreams of comprehensiveness crushed, we’ll revert to prior practice. Let’s just savor a couple of the toothier nuggets floating around in this all-encompassing toxic stew.

Monday the Centers for Disease Control [CDC] threw out its prior recommendation that “[b]ecause of the potential for asymptomatic and pre-symptomatic transmission, it is important that contacts of individuals with SARS-CoV-2 infection be quickly identified and tested.”

The new guidelines ignore the danger of asymptomatic transmission: “If you have been in close contact (within 6 feet) of a person with a Covid-19 infection for at least 15 minutes but do not have symptoms, you do not necessarily need a test unless you are a vulnerable individual or your health care provider or State or local public health officials recommend you take one.”

A CDC spokesperson passed the buck upstairs, to Health and Human Services, where Assistant Secretary Brett Giroir said the new guidance was “updated to reflect current evidence and best public health practices,” and was deliberated and approved the previous week. Giroir said Dr. Anthony Fauci—the one person on the coronavirus task force who’s trusted by the public—was among those doing the deliberating. Fauci says that isn’t true; he was under anesthesia at the time.

Melania Trump made a rare public appearance Tuesday. As usual—remember “I Don’t Really Care, Do U?”—it was both enigmatic and disturbing. The first third wife to be a First Lady had set the stage by having the White House Rose Garden—laid out under the stewardship of Jackie Kennedy—torn up and remade in a manner more suitable for the entrance of The Generic Corporation, Inc. Her outfit was reminiscent of the iconic uniform worn by Fidel Castro—who Jackie’s husband, despite several attempts, never was able to kill.

Before a small, unmasked audience of adoring sycophants, seated no more than two feet apart, she delivered a campaign speech which was beamed out as part of the Republican Convention.

There’s a law prohibiting this sort of thing: the quaintly-named “Hatch Act of 1939, An Act to Prevent Pernicious Political Activities.” The odds of it being enforced are less than zero, though, since Attorney General Barr has taken a side gig as the President’s personal lawyer.

We almost expected the ceremony to end with the Hatch Act burned in effigy. Perhaps that festive possibility was kept in reserve, for use during President Trump’s acceptance speech in the Oval Office last night. Sadly, the demands of our production schedule preclude our coverage of that event.

We can offer, though, a clearer picture of how Donald Trump won the Republican nomination, thanks to an uncharacteristic fit of honesty from Jerry Falwell, Jr.

Having inherited Liberty University, his late father’s fiefdom, Falwell fils held great power among American evangelicals. Given the natural affinity between the two camps—both are adept at believing in things which are not in evidence—his power extended to the Republican Party as well. With that power came responsibility: meet a high moral standard, or don’t get caught.

Falwell got caught. There were pictures of the wrong sort, with too many people in them. Then he was saved—in the evidentiary sense, not the Biblical. Michael Cohen, Donald Trump’s lawyer, doesn’t do that sort of work. The pictures went away just in time for Falwell to issue an endorsement, six days before the Iowa caucuses. Placing second there kept Trump alive, setting him up [sigh] for a win in New Hampshire.