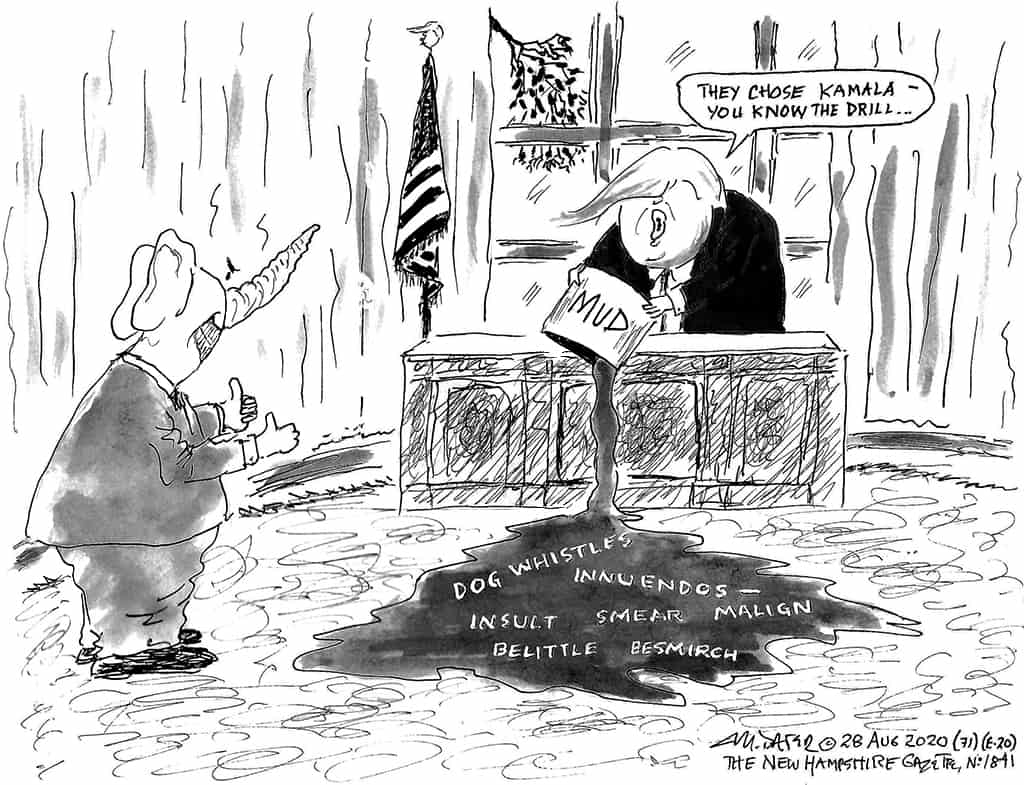 OK, we lied. In this fortnight’s rant we begged off from reporting on…that thing that happened at the White House last night. In the cold light of dawn [and for this time of year it was strangely cold] it is clear that such an abdication of responsibility is simply not acceptable. Accordingly, we have spiked the Pulitzer-quality essay which had been slotted for this space, in favor of the following modest bit of drivel.

First, to properly frame our assessment of the event under discussion, it’s important to remember that it was the slimax [That’s actually a typo, but we’re leaving it right there.–The Ed.] of a four-day extravaganza which saw an interminable parade of charlatans, criminals, fools, and dupes raising hosannas to the so-called man who is directly responsible for a horrifying fact which none of them acknowledged: more people died during this nomination convention because of his incompetence than were killed by terrorists on 9/11.

Now, let us begin. A close reading of this fortnight’s rant will show that we expected something like…that guy—you know, him—sitting at the Resolute desk, making an ass of himself, just by behaving as he always does. We joked—First Amendment, people, we still have that right!—that he might set fire to a copy of the Hatch Act.

Hah! As Lily Tomlin said, “No matter how cynical you become, it’s never enough to keep up.”

No, El Jefe delivered an hour-long-plus string of verbal noises from the South Portico of the White House—the one feature of the executive mansion which most resembles a balcony—the traditional location used by dictators to declare their omnipotent sovereignty—flanked by enormous political campaign signs bearing the candidate’s name.

Many of the professional masochists who actually listened to the entire jeremiad remarked on its lackluster delivery. We couldn’t say. There’s a limit beyond which we will not go. Fortunately CNN has in its employ a remarkable individual named Daniel Dale. He can not only stand to subject himself to such aural torture, he’s able to keep his wits about him sufficiently to track lies and deliver point-by-point rebuttals. One can only hope that CNN provides him with an ample mental health benefit package.

“Anderson,” he began, “this President is a serial liar, and he serially lied tonight….”

Where, we would like to know, was Daniel Dale back in 2016, when CNN was training its camera on an empty podium, in case a certain draft-dodging, tax-dodging, former reality TV star decided to show up and…well, tell lies?

For a full three minutes Dale rapidly rattled off a sampling of lies, each one coupled with its corresponding, contradictory facts. Under current conditions, when we’re constantly being assailed with a barrage of lies, hearing such a countervailing blast of truth can be deeply satisfying. One has to be receptive to the truth for it to have such an effect, though.

Dale’s truths would have rolled right off the thousand or so people sitting shoulder to shoulder, sans masks, on the South Lawn of the White House. By the fact of their attendance we know that they all enjoy some special status. That status would be put at risk if they started doubting the party line.

As for the teeming masses at home, they’re a different story. How to keep them all in thrall? New, improved lies. Old-fashioned political lies used to shade the truth and leave out relevant facts. That stuff is as dated now as great-grandpa’s straw boater.

No, the trick is to deny not just the facts, but our shared reality. The mass of men and women lead lives of—well, used to be quiet, not it’s rather noisy desperation. The cult now running this charade understand that pretty well. They don’t care to fix the problem. That would reduce their take. So, they just supply a different reality, one that’s more exciting than working three jobs in the hope you can stave off the day when you start living under a bridge.

CNN-watching truth junkies got their righteous dose last night, but so did the fans of the would-be dictator. Both sides saw what they couldn’t help but see. All of it was illuminated by a fireworks display—manufactured, we’re pretty sure, out of shredded copies of the Hatch Act of 1939, An Act to Prevent Pernicious Political Activities.

Because of Course He Is…

Pres. #45 is said to be holding a rally today in our fair state. Perhaps. We stick to our policy: nothing about the man can be believed.

A poll by St. Anselm’s, taken August 15th-17th, gives Biden an eight-point lead; 51 percent to 43 percent. If the ballots cast on November 3rd happen to come in at exactly that ratio, that might just be enough—after compensating for Republican shenanigans—to give Biden a slight edge.

Gilley’s seems to be taking our current conditions in stride. No wonder—this is not the diner’s first rodeo pandemic. The original diner, horse-drawn, began serving up hot dogs in Market Square in 1912, six years before the so-called Spanish Flu came to town.

Trump has been saying for some time that he wishes there was less testing for coronavirus in America, because that would reduce the number of cases that we find, which would improve, in his mind, his numbers compared to other countries.

So yesterday the Centers for Disease Control, under pressure from the White House, revised their guidelines to say that you should only be tested if you were physically sick. They made the decision while Anthony Fauci was unconscious under general anesthesia having minor surgery on his throat.

This decision will make it harder for people to get coronavirus tests, and will make it very difficult for people who are not hospitalized to have their insurance companies pay for those tests.

This is crazy. Half of people who get this disease and more than half of young people who get it, don’t have symptoms but are still wildly infectious.

Apparently Trump is betting that the massive spread of disease from this policy won’t happen until after the election, as there is a 1- to 2-month delay between initial infection and hospitalization and death.

Maybe he’s thinking that he can leave all these dead people to Joe Biden. Or maybe he just doesn’t care as long as it makes things seem better over the next month or two and thus wins him the election, which is the most likely explanation.

This administration has politicized everything from policing to national security to public health, and Americans are dying, both here and overseas, as a result.

To describe the modern Republican Party as a “death cult” is pretty accurate.

Whether it is tearing children from their families and letting many of them die or be sold, promoting policies that caused nearly 200,000 Americans to die from this virus, or encouraging deadly violence against people protesting racism, Trump and the GOP are all in on brutality, violence and death.

They even had serious conversations in Cabinet meetings about installing “flesh piercing” spikes on the border wall, using a “microwave heat ray” against people seeking asylum in the United States, and building moats with alligators while shooting migrants in the legs for the TV cameras.

The question now is, “Will Americans who have fallen sway to this cult begin to wake up, or will the Trump cultists be able, using Facebook and lies on Fox News and the media, to get even more Americans into their cult?”

The Stakes Could Not Be Higher

It’s no secret Donald Trump will do anything to hold on to power. His latest strategy is to sabotage the United States Postal Service, courtesy of his handpicked Postmaster General Louis DeJoy.

A Republican mega donor with no postal experience, DeJoy instituted sweeping measures that have caused massive mail delays across the country. As national outrage reached a fever pitch, DeJoy announced he would delay policy changes that slow down mail delivery, until after the election.

But the U.S.P.S. is still very much under attack.

DeJoy’s statement is nothing more than empty rhetoric. He didn’t even list which policies he would postpone. One of the few policies he did mention was overtime pay, which he said would be paid “as needed,” but guess who decides what’s needed? He does.

DeJoy also needs to repair the damage he’s already done. He told House Speaker Nancy Pelosi he has “no intention” of replacing removed mailboxes and sorting machines, and instructed U.S.P.S. employees to not reconnect or reinstall the sorting machines.

Trump openly admitted he was sabotaging the post office to stop people from voting. Now his political stooge postmaster general is basically saying “trust me.”

Congress must step in and do four things to protect the Postal Service and the integrity of mail-in voting before it’s too late:

1. Provide needed funding for the Postal Service in the next Covid-19 relief bill.

2. Force DeJoy to repair all the damage he’s already caused, returning the U.S.P.S. back to full capacity.

3. Fully investigate DeJoy‘s conflicts of interest. DeJoy still has at least a $30 million stake in his former company XPO Logistics, which directly competes with the Postal Service—putting him in a position to profit directly from any loss of Postal Service customers.

4. Pass legislation specifically blocking the Postal Service from instituting any changes that would slow mail delivery in the lead-up to November.

Trump and DeJoy will stop at nothing to sabotage the U.S.P.S. and steal the election—and there’s no telling the damage Trump will wreak if he’s able to swindle a second term.

Call your members of Congress at (202) 224-3121 and demand your representatives take these urgent steps to save the U.S.P.S. and protect the election. The stakes couldn’t be higher.

Robert Reich was Secretary of Labor during the first term of the Clinton Administration.

For better or worse, Portsmouth is seeing more people on its sidewalks these days. This tight little cluster of nine individuals, for example, was hanging out in Market Square on Saturday, August 15th, next to the “Wear a Mask” sign. None of them were wearing masks.

Now in its 14th year, The Black New England Conference is an annual two-day gathering where academics, artists, activists, and community members share insights and research on Black experiences, past and present, in New England and beyond. The Conference is both an academic conference and a celebration of Black life and history.

Conference panels this year will include Black Women as Purveyors of Change, Body Politics & Movements Toward the Sacred, Black Women’s Present-Day Leadership & Activism, Activism Through the Arts, Black Women in Electoral Politics, and The Next Generation.

A complete schedule and registration information are available online at blackheritagetrailnh.org/category/bnec/.

Our email inbox was graced recently with an informal dispatch from one of the people who have been working to create a public park on the North Mill Pond.

“On August 15th and 16th we had a socially-distanced, no contests, no prizes regatta—nothing but neighbors going out on the water, hoping to not get any open running sores or other medical conditions I’ve heard about from other concerned Islington Creek residents. Haven’t heard much from that ill-fated development on the pond, thank God.

“However we will be shamelessly shilling to raise money for our large Stone sign dedicating the park to the late Paul McEachern, a Democrat who has done more for the people of Portsmouth than anyone I can think of in recent history. We want to honor Paul, and make the City realize that we have a piece of land here that needs a little occasional maintenance.”

A plan is in the works to have a suitable granite boulder appropriately inscribed and installed, at no cost to the city. Donations can be made by mail to Advocates to the North Mill Pond, 111 Sparhawk St., Portsmouth, N.H., 03801

1 thought on “A Grand Cavalcade of Delusion”