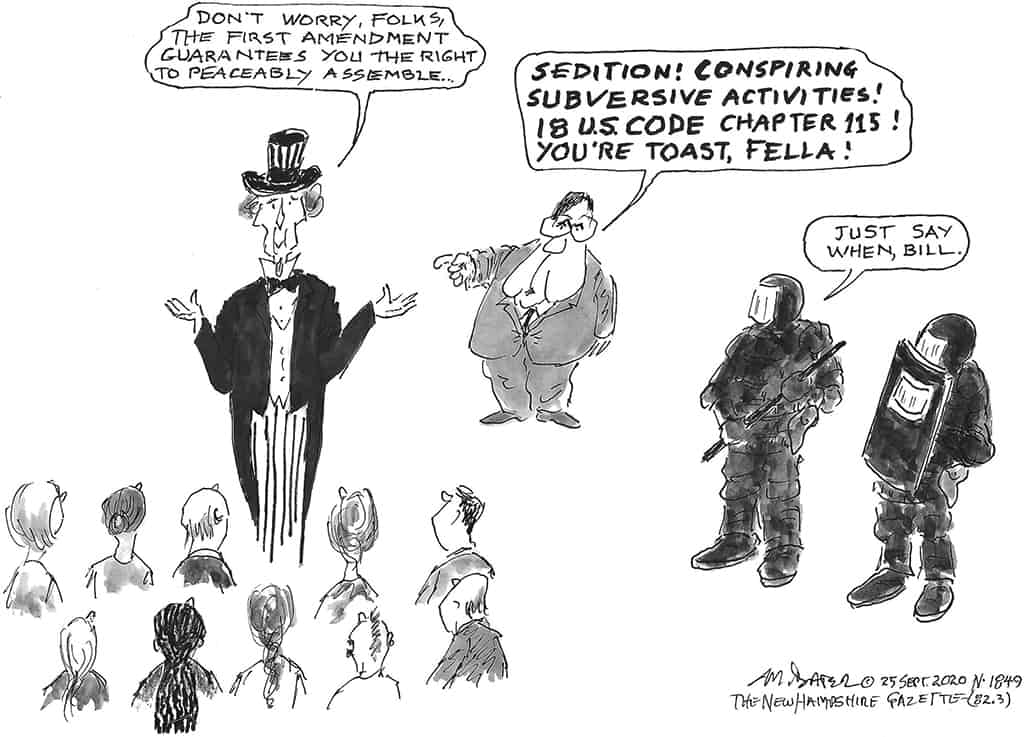 Over the past few years we have been slowly developing a plan to sort this country out by exercising more fully our rights under the First Amendment.

Too slowly, it seems—it’s starting to look like we need a Plan B. Before we get to that, though—and before we get hauled off to the hoosegow—we want to explain how Plan A was to have worked.

Let’s begin with a couple of basic facts about newspapers—small newspapers. In our case, a very old small newspaper, but the principles cited here apply to upstarts just as well.

Printing eight-page tabloid newspapers is incredibly cheap. We know—we’ve been doing it for decades. What’s more, as your press run goes up, your cost per copy goes down.

Also, if you give papers away, people will pick them up. Again: we know—we’ve been doing it for decades. To get more readers, just give away more papers.

These are not arcane and closely-held secrets. They are basic facts which are common knowledge in the advertising-flyer racket, whose shoddy works are only too ubiquitous. We have discovered something, though, over the past couple of decades, which, in combination with those facts, creates an intriguing possibility.

There are plenty of people who are more than willing to give up half an hour of their time once every fortnight in exchange for the thrill of seeing what a real free press can actually look like.

Accordingly, our Plan A was to use this spiffy revamped website to recruit enough volunteer distributers to make our paper readily available throughout New Hampshire’s First Congressional District.

Every citizen in this most basic political unit of our shaky democracy could have, if they want it, a svelte, one-ounce packet of newsprint-based free speech—a hard copy, on paper, in the physical, three-dimensional world.

There would be no point in doing this if the only purpose was to provide a marketing platform for whatever useless plastic crap some corporation wanted to unload for a profit. We are already inundated with that junk, and it’s killing us.

No, the point to doing this would be to subvert the dominant paradigm. Hell, somebody’s got to do it—look where that’s gotten us.

We somehow got the notion that providing enough inconvenient facts about the Party of Business-as-Usual might help innoculate this district from, say, another Frank Guinta. And if we could do that here, what’s to stop someone else from doing the same thing in District Two? Why, went the thinking, shouldn’t every one of the country’s 435 districts have a newspaper that’s capable of printing the damn truth…for a change?

To our surprise we discovered, during the course of developing this scheme, that there’s a whole school of thought on this subject. It sprang up after Jürgen Habermas wrote a little trifle in 1962 with the entrancing title, Strukturwandel der Öffentlichkeit. Untersuchungen zu einer Kategorie der bürgerlichen Gesellschaft [The Structural Transformation of the Public Sphere].

Apparently, philosophers and political scientists have been arguing ever since about how shared public spaces—literal and metaphorical, but largely in print—effect societies. We don’t try to keep up with that discussion. We’re just trying to do it.

Such was the state of our beloved Plan A when the novel coronavirus began to spread.

Perhaps, if the cretinous buffoon in the Oval Office had done a few things right instead of everything wrong, we might still be visiting scores of locations in the Seacoast, and around Concord, and be expanding our readership from there. As it is, we cannot in good conscience ask anyone to go traipsing through a dozen or so places of small business to drop off our paper. Hell, we hardly leave the office except to gather supplies. What’s more, looking at the situation from the perspective of our particular needs, there’s no reason to expect conditions to change in the forseeable future. As Ned Stark used to say, winter is coming.

We regret failing to act more quickly. There’s at least one chance in, say, a hundred billion that we might have had some effect on February 9, 2016. But nooo….

Since then we have tried to keep abreast of the most egregious violations of public trust being committed by the winner of that First in the Nation™ Presidential Primary Election® and the assorted co-conspirators, running dogs, toadies, goons, and dupes who make his reign of terror possible. It has become increasingly clear that it’s impossible to maintain any such inventory while accomplishing anything else.

It is far more practical to simply assume that until further notice the White House and the Executive Branch in general are determined to reduce this country to a lifeless hellscape. Public health resources will be devoted to making people sick. Environmental agencies will collaborate with industries to maximize the release of increasingly-potent toxins. And, as for law enforcement….

Commandante Bone Spur announced this week that for all practical purposes, he’s done with elections. We can hold ‘em if we want, he’s just not interested in the results. He either wins, or they’re rigged. Either way, he stays.

In a functioning democracy, the Attorney General would have a brief talk with this guy, then slap on the cuffs and give him a perp walk. As with public health and the environment, however, that ain’t gonna happen. If any uppity citizens dare to disrespect his boss, Billy the Bully Barr might just personally give ’em one upside the head.

All is not yet lost, though. We still have hope. Surely the Democratic Party will…. Wait a minute—this same bunch of timid, feckless folks who have been caving to this crowd since Newt Gingrich became Speaker of the House…?

However improbable, there is one thing they could do that really would give us hope: impeaching Attorney General Barr before he helps throw the election. Failing that, it’s time for a general strike.