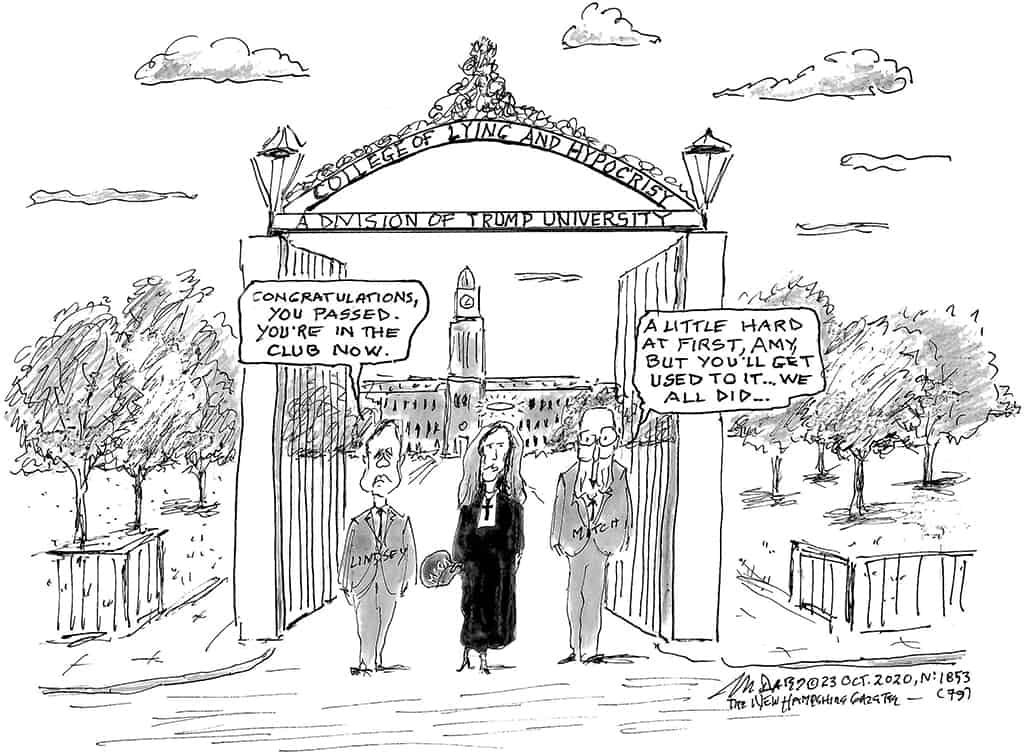 On June 27, 2015—ten days after nine Black worshippers in Charleston, South Carolina were murdered by a white supremacist—an artist and activist then known as Bree Newsome scaled a flagpole on the grounds of that state’s capitol and hauled down the Confederate battle flag.

“In the name of Jesus, this flag has to come down,” she said as she was being arrested. “You come against me with hatred and oppression and violence. I come against you in the name of God. This flag comes down today.”

Two weeks later the legislature of South Carolina—which had been defending the Confederate flag’s presence for decades—essentially ratified Newsome’s radical declaration. Reverberations from these actions spread beyond the bounds of the Palmetto State and inspired others around the nation. It was surely not the only cause, but, for a change, things actually changed. Racist systems still abound, to be sure, but at least the days when official displays could overtly promote racism are over.

Not surprisingly, the activist, now known as Bree Newsome Bass, is Black—as were two of the three officers assigned to arrest her in 2015. Sending white cops only would have made for bad PR.

Part of a larger project titled, “Abolition for the People,” it argues that “The idea that we can resolve racism by integrating a fundamentally anti-Black institution in the U.S. is the most absurd notion of all.

“Amid recent growing calls for defunding police this summer, a set of billboards appeared in Dallas, Atlanta, and New York City. Each had the words ‘No Police, No Peace’ printed in large, bold letters next to an image of a Black police officer. Funded by a conservative right-wing think tank, the billboards captured all the hallmarks of modern pro-policing propaganda. The jarring choice of language, a deliberate corruption of the protest chant ‘no justice, no peace,’ follows a pattern we see frequently from proponents of the police state. Any word or phrase made popular by the modern movement is quickly co-opted and repurposed until it’s rendered virtually meaningless. But perhaps the most insidious aspect of modern pro-police propaganda is reflected in the choice to make the officer on the billboard the face of a Black man.

“This is in keeping with a narrative pro-police advocates seek to push on a regular basis in mass media—that policing can’t be racist when there are Black officers on the force….”

Bass’ analysis cuts through the fog, revealing that which some say does not exist:

“Part of the reason why calls to defund police have sent such shock waves through the nation, prompting placement of pro-police billboards and pushback from figures of the Black establishment, is because it cuts right to the heart of how structural racism operates in the United States. At a time when the Black elite would prefer to measure progress by their own tokenized positions of power and symbolic gestures like murals, the push to defund police would require direct confrontation with how the white supremacist system has been organized since the end of chattel slavery—when the prisons replaced plantations as the primary tool of racial control. Actions that may have been widely seen as adequate responses to injustice just a couple of decades ago now ring hollow to many observers who see that Black people continue to be killed by a system that remains largely unchanged.”

Abolishing the police may seem more radical now than the South Carolina legislature taking down the Stars and Bars in 2015. In the rear view mirror of history, though, doesn’t that now seem inevitable?

Throwing In the Towel at the Bad Faith Olympics

“I want you to use my words against me. If there’s a Republican president in 2016 and a vacancy occurs in the last year of the first term, you can say Lindsey Graham said let’s let the next president, whoever it might be, make that nomination.” – Senator Lindsey Graham [R-S.C.], Chair of the Senate Judiciary Committee, in February, 2016, justifying the Republicans’ un-Constitutional refusal even to hold hearings for a replacement of the late Justice Antonin Scalia because a Presidential election is only nine months away.

“This has been one of the best set of hearings that I’ve participated in. It leaves one with a lot of hopes, a lot of questions and even some ideas perhaps of good bipartisan legislation we can put together.” – Sen. Dianne Feinstein (D-Calif.), Ranking Member, Judiciary Committee, Friday, October 16th, shortly before masklessly hugging the maskless Graham.

“It’s official. We did it. Judge Barrett is going to the floor.” – Senator Lindsey Graham, Thursday, October 22nd, after presiding over a Judiciary Committee meeting without the required caucus, less than two weeks before a Presidential election.

“The addition of Amy Coney Barrett to the Supreme Court, moving it further rightward, could have significant consequences for U.S. climate change policy and complicate the government’s ability to regulate pollution, according to legal experts.

“The confirmation of President Donald Trump’s nominee in the Republican-led Senate, expected on Monday after the Judiciary Committee voted in favor of Barrett on Thursday, would give the Supreme Court a 6-3 conservative majority. …”

“If confirmed, Barrett would participate when the court hears an appeal by energy companies including [BP, Chevron, Exxon, and Shell] contesting a lawsuit brought by the city of Baltimore seeking damages for the environmental effects of burning oil.” – Reuters, October 22nd.

Reuters’ article fails to mention that Barrett’s father, for most of his career, was an attorney for Shell. Asked if she would recuse herself, Barrett told one Senator she would “fully and faithfully apply the law of recusal and part of that law is to consider any ‘appearances’ questions.” Giving a longer response to another Senator, she said, “it’s always up to the individual justice, but it always involves consultation with the colleagues—with the other eight justices. So that’s not a question that I could answer in the abstract.” So, maybe.

The big question, of course, is what she’ll do if the 2020 election lands in front of the court, like it did twenty years ago. Our best guess is that she will act with about as much adherence to high principal as did the Chairman of the Judiciary Committee.

Rush Limbaugh, who has profitably spewed right wing propaganda for more than three decades, announced on Monday that his lung cancer is progressing, and he has been diagnosed as terminal.

On April 17, 2015, he had this to say: “I’m telling you, there ought to be some measure of appreciation for people who buy tobacco products, despite the forces arrayed against them. It’s getting harder and harder to use tobacco products…. [T]hey have to endure a lot, the public hates them, they’re despised, they can’t smoke in places of comfort anymore, can’t even smoke outside in a park! And yet their actions and their taxes and their purchases are funding children’s health care programs. I’m just saying there ought to be a little appreciation shown for them, instead of having them hated and reviled. I would like a medal for smoking cigars, is what I’m saying.”

Having been properly raised—comes as a surprise, we know—we will say no more.

Religious prohibitions preclude our answering the newsroom telephone before dawn, so whoever called at 5:06 a.m. on Tuesday had to leave a message:

Longtime readers accustomed to our rather staid approach to the news may be shocked, but this is not the first peculiar phone call we have received. It does raise the Weirdness Bar several pegs higher, though.

We suspected it might be QAnon-related, but a search for the caller’s purported number, [(530) 651-8580], and another search for the term “3300 Clark Street,” failed to discover anything whatsoever.

Typically, the Flag Police, though occasionally wrong, are rarely in doubt. This, however, is 2020. All bets are off. Routine quasi-official functions such as theirs have been knocked into a cocked hat. Fortunately, through its association with a newspaper founded when cocked hats were en vogue, the local precinct has been able to draw upon institutional memory, and has finally resolved this vexing vexillological case.

The question was, are the American flags at the popular dining establishment in Exhibit “A” [below] displayed improperly because, from the perspective of passing traffic, they show the starred field at the upper right?

Or are they displayed properly because, to customers on the sidewalk, they show it at the upper left?

After careful considerable, a ruling has been reached: yes and no.

Eternal vigilance is, as everyone knows, the price of upholding the fetishization of material objects which symbolize the values of a purported republic in the absence of any perceptible functionality. It follows, then, that incorporating our primary national emblem into a mere screen for shielding diners from the noise and distraction of passing vehicular traffic is not permitted under the Flag Code.

Climate scientists and activists responded with alarm Thursday to reporting that this is the latest date in recorded history that “the main nursery of Arctic sea ice in Siberia has yet to start freezing,” another example of the present-day consequences of human-caused global heating.

According to the Guardian, “The delayed annual freeze in the Laptev Sea [east of Bolshevik Island] has been caused by freakishly protracted warmth in northern Russia and the intrusion of Atlantic waters, say climate scientists who warn of possible knock-on effects across the polar region.”

“The lack of freeze-up so far this fall is unprecedented in the Siberian Arctic region,” Zachary Labe, a postdoctoral researcher at Colorado State University, told the newspaper, adding that the current conditions are in line with scientists’ expectations about the consequences of anthropogenic climate change.

“2020 is another year that is consistent with a rapidly changing Arctic,” added Labe, who also shared a series of related graphics on Twitter. “Without a systematic reduction in greenhouse gases, the likelihood of our first ‘ice-free’ summer will continue to increase by the mid-21st century.”

As the Guardian detailed:

The Laptev Sea is known as the birthplace of ice, which forms along the coast there in early winter, then drifts westward carrying nutrients across the Arctic, before breaking up in the spring in the Fram Strait between Greenland and Svalbard. If ice forms late in the Laptev, it will be thinner and thus more likely to melt before it reaches the Fram Strait. This could mean fewer nutrients for Arctic plankton, which will then have a reduced capacity to draw down carbon dioxide from the atmosphere.

More open sea also means more turbulence in the upper layer of the Arctic ocean, which draws up more warm water from the depths.

In a series of tweets about the reporting, climate scientist Peter Kalmus declared, “Goodbye to the delicate sheet of ice at the top of our planet.”

Kalmus was far from alone in expressing concern and frustration over the conditions in the Arctic and pointing to the new record as just the latest evidence that policymakers must urgently address the climate crisis.

“This is a frightening milestone,” Food & Water Watch tweeted about the lack of ice in the Laptev Sea. “Our leaders must act to curb and mitigate climate change.”

The Green Party in the United Kingdom also shared the report and warned that “we’re breaking the wrong records.”

“Time is running out,” tweeted former congressional candidate Skylar D. Hurwitz, calling on Americans to vote for Democratic presidential candidate Joe Biden. Although the former vice president remains under pressure from progressives to embrace bolder policies, the contrast between his positions and those of President Donald Trump has won him widespread support from climate experts and advocates.

The latest climate crisis record comes after Arctic sea ice shrank to the second-lowest documented extent last month, which the National Oceanic and Atmospheric Administration found was the hottest September ever recorded. Global scientists warned earlier this month that 2020 is on track to be the warmest year on record.

This work is licensed under a Creative Commons Attribution-Share Alike 3.0 License. Feel free to republish and share widely.