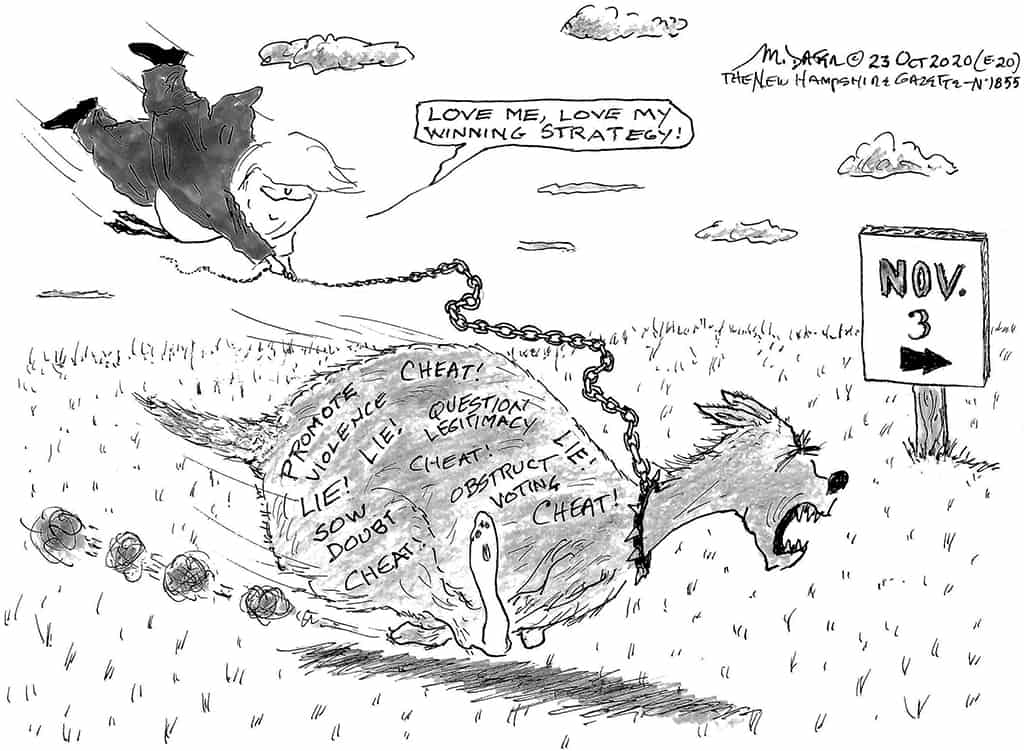 This fortnight certainly got off to a rousing start. Based on their scrutiny of his tax returns for the past two decades, a team of ten reporters for the New York Times demonstrated that Donald J. Trump has, after a six-pack of bankruptcies, finally stumbled onto a business model that works for him: “turning his own hotels and resorts into the Beltway’s new back rooms, where public and private business mix and special interests reign.”

After reading “The Swamp That Trump Built”—only the most recent in a long line of exposés which once might have been sufficient to trigger incarceration—an irate George Washington rose from his grave, strode north for ten miles atop the Potomac, and slapped his successor across the face with one very surprised catfish.

Actually, though it’s pretty to think of Parson Weems’ Washington having done so, the previous paragraph is fiction—a feeble attempt to inject a little levity into the proceedings at a moment when American voters are about to decide whether or not to let the world become uninhabitable. Beleaguered as we all are by a blizzard of unbelievable events, we felt it our journalistic duty to make this distinction explicit.

Readers of William Hogeland’s works* will of course have seen the absurdity of the proposition immediately. As a land surveyor, Washington showed “zero regard for the law…breaking, working around, and eluding legal requirements while privately expressing disdain for them.” As a developer, he “ruthlessly ripped off the upscale partners too—secretly jiggering surveys to give them the less valuable and him the more valuable assets.” As President, his disregard for the emoluments clause was equally appalling, “obsessively running his private businesses, hands-on, buying and selling property and exercising management as both landlord and slavedriver, from his desk.”

Whatever may have been his sins, Washington has been dead for 220 years. Trump, on the other hand, is up for reelection in eleven days. Yet, due to the pace at which sordid events are revealed in this, the year of Beelzebub 2020, the Times’ October 10th revelation is now forgotten.†

Also falling into the oubliette this fortnight was an event which—in the event of a second term—does not bode well.

On the Friday before the Times’ revelation, Trump made his first public appearance following his Covid diagnosis. White House physician Sean Conley is thought to have prescribed the event to boost his flagging spirits.

Having already used the White House as a backdrop, as he accepted his party’s nomination for another term and gotten away with it once, he used it again as a prop for a bit of straight campaign propaganda. After shuffling onto the balcony overlooking the South Lawn, Trump spoke before a group of about 400 crisis actors, trucked into Swampville to simulate a crowd spontaneously yelling his praises.

The job of assembling this so-called “crowd” had been outsourced to Candace Owens. Five years ago Owens was posting online about the “bat-shit-crazy antics of the Republican Tea Party.” Having come to realize, perhaps, where the money was, she switched sides and began working for Charlie Kirk’s Turning Point U.S.A. She now operates a presumably-subsidized astroturf outfit of her own, called Blexit. It aims to convert Black Democrats into Republicans—say what you will about her, she does not lack ambition. Like Trump, Owens creates interest in her operation by taking provocative positions, i.e., calling George Floyd “a horrible human being.”

The South Lawn audience was mostly Black, and wore matching outfits. Between all those China-red MAGA hats and blue shirts, it was impossible not to think of Chang Kai-sheck and his fascist Blue Shirts. Because they looked a little lonely, milling around in the mostly-empty South Lawn, barriers were brought in to crowd the participants together, thus enhancing the visual effect for the television cameras, and increasing the chances for virus transmission.

If his supporters should happen to come down with the virus, they’d better do it soon. The Supreme Court may be about to overturn the Affordable Care Act.

“I hope that they end it,” Trump said recently, “It’ll be so good if they end it.” We haven’t worked out exactly how the President expect to profit by taking away health care from tens of millions of people. Perhaps that’s why he’s the President, in the White House, and we’re just ink-stained wretches in ancient offices.

Mitch McConnell—whose hands, from the look of recent photographs, may not remain attached to his arms much longer—and Lindsey Graham, whose soul departed his body long ago, have heroically disregarded their infirmities recently to make sure Darwin gets a clean shot at Owens’ Blue Shirts.

Soon-to-be Justice Amy Coney Barrett is not just likely to throw out the ACA. She’s a sure bet, too, given half a chance, to throw the nation’s Number One Bum back into the White House.

Hard as it may be to imagine right now, we could end up looking back on these last days preceding November 3rd as a time of blissful, innocent ignorance. The Court we already had threw out the restraints placed on the Republican Party by the Voting Rights Act.

What will the Court we’re about to get do? And what will that Party, unleashed, get up to?

* Hogeland, called “one of the best historians of early America” by John Ferling, U. of W.Va., “is the author of the narrative-history trilogy Wild Early Republic—The Whiskey Rebellion (Simon and Schuster), Declaration (Simon and Schuster), and Autumn of the Black Snake (Farrar, Straus and Giroux)—as well as the expository work Founding Finance (University of Texas Press) and a collection of essays, Inventing American History (Boston Review Books/MIT Press).” – https://williamhogeland.wordpress.com/about-2/.

† In a perverse sort of way, this gives us hope. As we have mentioned before, we had been suffering from a slight identity crisis caused by the absence of the newsprint substrate on which we usually rely to be manifest out there in meatspace. As a good, kind friend once said, though, “Better old news than new lies.” If we can do nothing else, perhaps reminding our readers what was news two weeks ago will justify to some degree our continued consumption of oxygen.