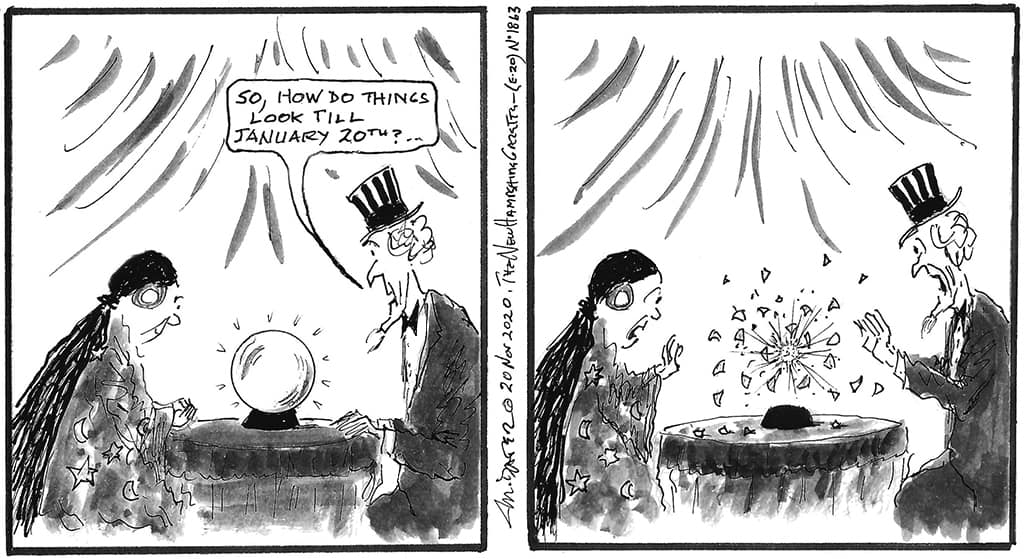 In a sane country it wouldn’t have even been a contest, but we live in Freedomland.

A quarter of a million people are dead, killed by a plague the incumbent treated as a political opportunity rather than a threat to national health. The infection rate and the Dow Jones are soaring, even as Main Street is collapsing. Despite all that, the election was so close it took four days to get a clear result.

That’s OK, it could have been worse. At least, in the end, the challenger beat the incumbent—never an easy trick for that office—and did it by six million votes. He even defied the long-dead slaveholders who invented the Electoral College.

A new stick has been thrust into the spokes of democracy, though: following the convenient trail of breadcrumbs left by his most recent Republican predecessor, the incumbent is attempting to overturn the results of the election by judicial means.

The Party of Lincoln, the sober-sided “adults in the room” who could formerly be relied upon to strike a pose of Constitutional seriousness, are backing his play, as the mobsters say. That gurgling noise is coming not from a swamp that is draining, but the dregs of Republican ethics disappearing down the sewer.

At least this sordid process clarifies why they’ve gone to such lengths to pack every court in the nation. When your party’s survival depends on having a friendly thumb on the scale of justice, there is no such thing as too many judges. Despite having this home-court advantage though, the Golfer-in-Chief’s odds don’t look good.

A law degree represents a tremendous investment in time and money; this must be so, otherwise the poor would be able to defend themselves. No top-notch talent is going to jeopardize a lucrative career on crackpot cases like those the Executive Branch is putting forward. Hence, the Four Seasons Total Landscaping press conference, starring Rudy Giuliani.

Around noon on that day, the Associated Press finally called Pennsylvania—and hence the election—for Joe Biden. In Portsmouth, people flooded Market Square and began celebrating deliriously; in Philadephia, representatives of the President of the United States gathered to hold a press conference in a parking lot conveniently located between a smut shop and a crematorium.

New Hampshire’s own Corey Lewandowski was among those present. The President’s senior campaign advisor lent gravitas to the event by accusing a dead woman of having voted. For religious reasons—he’s a devout Republican—Lewandowski spoke without a mask. News reports a few days later said the President’s lackey had tested positive for the coronavirus. The health status of journalists exposed to his barking is unrecorded, due to insignificance.

Future presidential historians, assuming humanity is lucky enough to survive past Inauguration Day, will find the details of this historic occasion archived on their very own Wikipedia page.

BREAKING NEWS—We regret to report that the odds are turning against any such future historians; Rudy held another press conference Thursday, and we’re dialing back our aspirations accordingly. Never mind Inauguration Day, we’ll be lucky if this country doesn’t fall apart—or worse—before December 14th.

That’s the date when, according to the Congressional Research Service—a legitimate branch of the Library of Congress, not some loose cabal of loonies squatting in a vacant shopping mall—the Electoral College phase of our “peaceful transfer of power” kicks in.

The Library’s explanatory document on this matter is all very quaint, citing U.S. Code (3 U.S.C. §6), and “Certificates of Ascertainment of the vote,” and blah, blah, blah. Guess what? Rudy Giuliani lights his stogies with 3 U.S.C. §6.

Typecast, frankly, for this role in the unholiest Hail Mary in history, Rudy has been pushing coffins full of lifeless lawsuits through the courts, as part of a scheme to spare the Miscreant-in-Chief an awkward move from the White House to the Big House.

DemocracyDocket reported late Thursday that the President’s lawyers “are now 1-32 in post-election litigation”—which would be encouraging, if one were so simple as to think that the parties to this relentless farce had any intention of abiding by the law.

As @BlogsofWar put it, “The GOP is basically filing Sovereign Citizen quality lawsuits.” In one suit filed in Bucks County, Pa., the President’s lawyers even put it in writing: “there exists no evidence of any fraud, misconduct, or any impropriety with respect to the challenged ballots.”

The lawsuits don’t need to win legal arguments in court. Their purpose is to stall for time and kick dust in the eyes of the referees. This being a democracy, of course, ultimately the referees are The People—specifically, those stalwart men and women who care enough about freedom, democracy, and the Constitution—and the flags in which they’ve draped themselves, in violation of the Flag Code—to turn up at Trump rallies and yell without a mask.

Rudy’s crazed utterances enflame the passions of red shirts, hoping to raise enough of a ruckus to derail the Electoral College. If that vestigial organ of democracy fails to vote on December 14th, then bingo—that much-mocked map of red and blue states suddenly switches from ridiculous to ominous: the election goes to the House of Representatives.

Cows don’t vote, and neither does land—or it wouldn’t, if not for our Founding Geniuses.

We fervently hope, in the not too distant future, to apologize for being too amped up on this matter.

In other news, though, two day before the election, NBC News reported that work crews were about to “build a ‘non-scalable’ fence to secure the [White House] complex, Ellipse and Lafayette Square.”

1 thought on “The Cuckoo Coup”