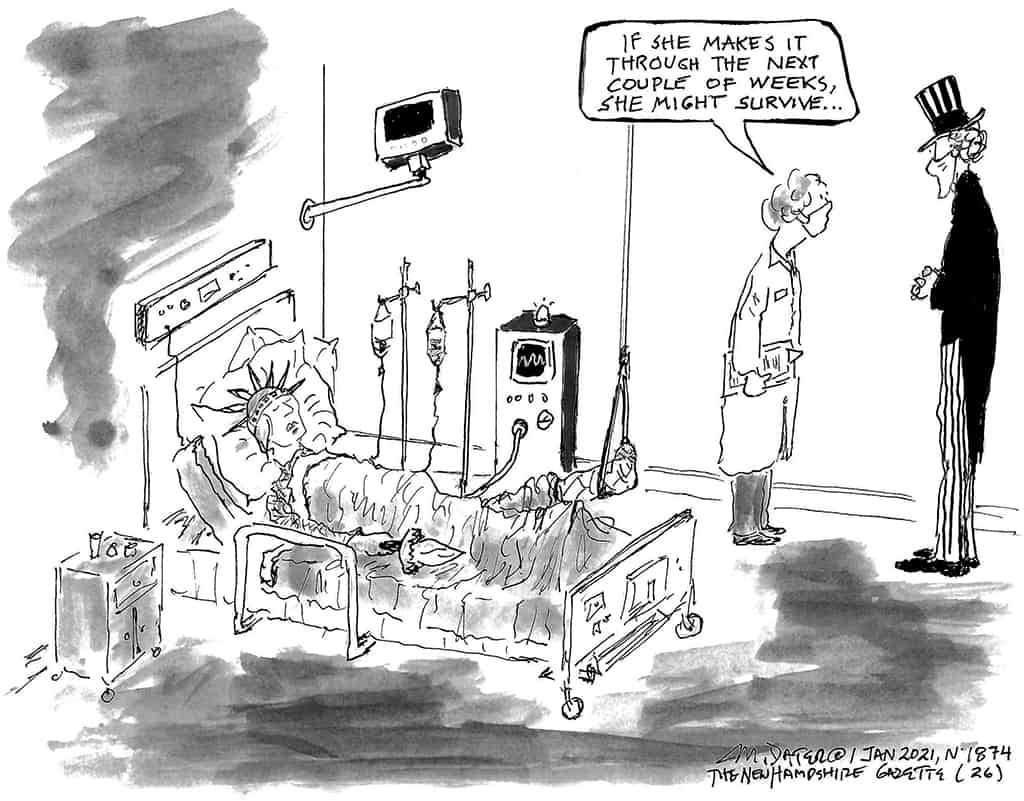 Yes, despite our rattled, snake-bit fears, the last day of December, in the Year of Our…

No, not gonna do it. We may stray towards blasphemous territory from time to time, but we’re not about to risk laying responsibility for the past 366 days—because yes, of course it was a Leap Year; it had to be, to accommodate that much idiocy and malevolence—at the foot of the Christians’ God, or any other diety.

Besides, it’s pretty clear who really was responsible for making last year the deadliest year in U.S. history.

“America has been paralyzed by death and fear for nearly a year,” lamented Dr. Scott Atlas in the Wall Street Journal, “and the politicization of the pandemic has made things worse by adding misinformation and vitriol to the mix. With vaccines finally being administered, we should be entering a joyous phase. Instead we endure still more inflammatory rhetoric and media distortion.”

Published on December 21st, that diatribe sums up 2020 perfectly: an unqualified crackpot—Atlas is a radiologist who knows nothing about epidemiology—pouring lethal bullcrap into the ear of an ignoramus, who comes right out and says, “I don’t take any responsibility at all.”

Yes, we noticed that. If only we knew what spurred him to confess that truth—so out of character….

This question of responsibility came up again this morning, when NPR’s Leila Fadel interviewed Dr. Paul Offit. An advisor to the FDA and the Children’s Hospital of Philadelphia, Offit is a noted expert on vaccines—and has therefore been the target of a long-running anti-vaccine hate campaign.

Fadel asked, “President Trump recently deflected blame, tweeting ‘The Federal Government has distributed the vaccines to the states. Now it is up to the states to administer. Get moving!’ How much responsibility for planning and logistics to do the states bear, and how much does the Federal government bear?”

Offit responded, “Well, they both bear responsibility….These aren’t Republican or Democratic issues and the finger pointing doesn’t do any good. Let’s figure out how to do this, and do it, and spend the resources we need to do it. It’s just wearing, frankly, always trying to figure out who to blame.”

Fadel, as an employee of NPR, has taken holy orders at the Mother Church of Objectivity, and was thus prohibited from interjecting, “What in hell are you saying?”

We are not about to argue with Dr. Offit about the merits of lipid nanoparticles. This question of determining responsibility, though, is another matter entirely. In fact, that’s our job, so let’s rip.

This allegedly exceptional nation of ours is locked into a two-party political system. You may have heard about it. It’s the subject of a feature film in 1994, starring Jim Carrey and Jeff Daniels.*

One of those parties has the upper hand thanks to our malfunctioning Constitution, the transmission of which is permanently stuck in a gear known as “Stupid.” It focuses relentlessly on its priorities, a task made easier by their simplicity: acquire more money and more power, by any means necessary.

The other party fetishises fair play above all. Rather than thrashing its opponent without mercy, thus forcing it to comply with the law, it prefers to meet the other party halfway and lose fair and square.

In lieu of policies actually put in place, to make ordinary lives halfway liveable for everyone, it offers guarantees that representatives from every conceivable category have an equal opportunity to compete for a job in a free market which is determined to consume them.

After calling the $24 billion campaign to create the vaccine a great success, Offit said we needed a similarly-massive effort to mass produce it, and yet another to get it into peoples’ arms.

We have no doubt that Offit is right about the need for mass production and distribution. Since the need is clear, Congress will no doubt act immediately.

We can’t help but wonder: what might it take to force Mitch McConnell to say “Uncle! Whatever the people need, they may have it—the vaccine, a $15 minimum wage, high marginal tax rates….”

Would rolling tumbrils do the job? This may be the year for them.

We have long believed—since being awakened by rocket fire on January 31st, 1968, to be exact—that the most foolish thing a person could ever say is that things couldn’t get any worse. Today, however, we feel it is safe to say that there is actually a chance that things might get slightly better. You never know; it could happen.

Maybe we’re just being temporarily bamboozled by this bright, sunny, windless winter morning, with hardly a cloud in sight. Or, maybe we’re feeling what William Faulkner spoke of in his Nobel Prize address on December 10, 1950:

“…I decline to accept the end of man. It is easy enough to say that man is immortal simply because he will endure: that when the last ding-dong of doom has clanged and faded from the last worthless rock hanging tideless in the last red and dying evening, that even then there will still be one more sound: that of his puny inexhaustible voice, still talking.

“I refuse to accept this. I believe that man will not merely endure: he will prevail. He is immortal, not because he alone among creatures has an inexhaustible voice, but because he has a soul, a spirit capable of compassion and sacrifice and endurance. The poet’s, the writer’s, duty is to write about these things. It is his privilege to help man endure by lifting his heart, by reminding him of the courage and honor and hope and pride and compassion and pity and sacrifice which have been the glory of his past. The poet’s voice need not merely be the record of man, it can be one of the props, the pillars to help him endure and prevail.”

* The film, of course, is “Dumb and Dumber.” See our reply to “No Labels, No Thanks,” on page four, for a diatribe explaining why we suffer from this self-inflicted wound, and why we cannot seem to pull out the knife.