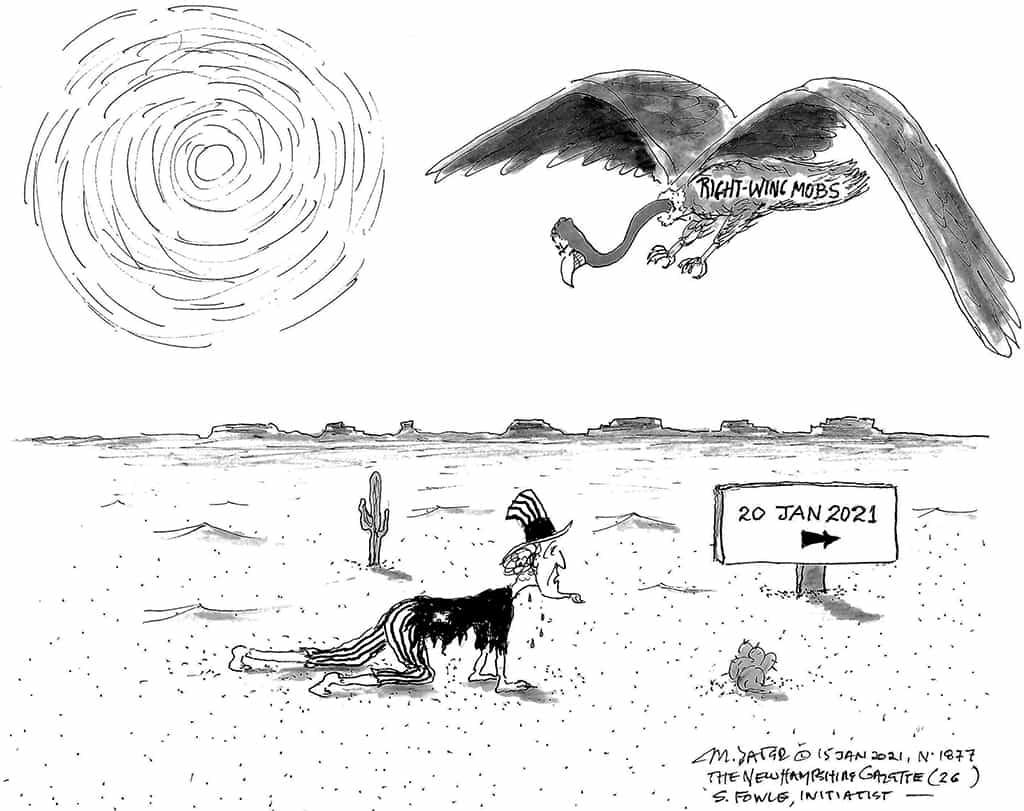 People used to expect that sooner or later, chickens would come home to roost. Recently studies have shown, however, that if you leave Republicans in charge too long, chickens mutate into vultures.

After a prolonged period of uncertainty—the likes of which have not been seen since the ignominious end of Reconstruction—the basic elements of our immediate future finally seem clear: the incumbent administration will only be in charge for another three days and a wakeup.

Ordinarily that’s not so long. When you’re staked out in the desert, though, as vultures circle overhead, ordinary does not apply.

This is not to say that we, as a nation, are necessarily doomed. In fact, in many ways, things are looking up. It’s just that, as with so many other metrics—the distribution of wealth, income, health care, and education; the burden of hazardous employment and military service—extreme outcomes seem to be the rule lately.

Physicists say that to understand light it must be considered as both a wave and a particle. In our effort to get a grip the writhing chaos of January 6th, we will look at it, experimentally, as two events happening simultaneously: an autogolpe* and a MAGA Insurrection.

Let us first consider, here, the autogolpe, applying this term, borrowed from the Spanish, to the phase of the operation which was being conducted inside the White House and the Capitol by the President and his supporters who hold elected office.

In the Alleged News® we will dig into the MAGA Insurrection, carried out by supporters of the President who do not, for the most part, hold elected office.

This Solomonic division is clearly arbitrary, and perhaps it is even capricious. It allows us to ask two interesting questions, though.

Was the MAGA Insurrection designed and fomented to provide cover for the autogolpe?

And, was the autogolpe defeated by the furry, horned, and bloody spectacularity of the MAGA Insurrection?

“President Donald Trump huddled with a group of congressional Republicans at the White House on Monday,” Melanie Zanona wrote, “where they strategized over a last-ditch effort to overturn the election results next month, according to several members who attended the meeting.”

“Rep. Mo Brooks (R-Ala.)—who is spearheading the long-shot push to overturn the election results in Congress—organized the trio of White House meetings, which lasted over three hours and included roughly a dozen lawmakers. The group also met with Vice President Mike Pence….lawmakers noshed on a mid-afternoon snack of meatballs and pigs in a blanket [as] Trump talked with members for over an hour about how Jan. 6 will play out.”

According to one second-term Congresswoman, January 6th played out as it did, at least in part, because Members of Congress served as a link between the autogolpe and the MAGA Insurrection.

Because of the catastrophically-mishandled coronavirus pandemic, public tours of the Capitol building have been shut down since March. On a live webcast Tuesday evening, though, Rep. Mikie Sherrill [D-N.J.] alleged that members of Congress had guided groups of people through the Capitol  on January 5th, doing “reconnaissance for the next day.” Sherrill knows reconnaissance; she flew Sea King helicopters for nine years in the U.S. Navy.

On Wednesday she and 33 other Members sent a letter to the Sergeants at Arms of the House and the Senate, and the Acting Chief of the Capitol Police, requesting an immediate investigation of the “unusually large groups of people throughout the Capitol who could only have gained access to the Capitol Complex from a Member of Congress or a member of their staff.” Somehow looters found the unmarked, third-floor office of House Majority Whip Jim Clyburn (D-S.C.), and stole his iPad; Rep. Ayanna Presley [D-Mass.] discovered that the panic buttons had been removed from her office. It’s probably just a coincidence, but Clyburn and Pressley are both Black.

Politico has reported that Rep. Tim Ryan (D-Ohio) “said he’s aware of ‘a couple’ names of colleagues who are being eyed as potentially giving tours to the would-be insurrectionists. But he said he wouldn’t name them yet.”

So, yes, things do look kind of bad. But cheer up—they could always be worse. We’ve been thumbing through the latest version—December 3, 2020—of Defense Primer: Command and Control of Nuclear Forces, published by the Congressional Research Service. It says, “The U.S. President has sole authority to authorize the use of U.S. nuclear weapons. … The President can seek counsel from his military advisors [but their] job is to give advice, while the authority to order a launch lies with the president.

“The President does not need the concurrence of either his military advisors or the U.S. Congress to order the launch of nuclear weapons. In addition, neither the military nor Congress can overrule these orders. … [Q]uestions about the legality of the order…are more likely to lead to consultations and changes in the President’s order than to a refusal by the military to execute the order. … The President could delegate the authority to authorize the use of nuclear weapons to others in the chain-of-command…but they also could not overrule the President.”

Look at it this way: if we make it past Tuesday, the odds of a nuclear war will probably drop dramatically!

* Autogolpe: noun, aʊtə(ʊ)ˈɡɒlpeɪ. In Latin America: a military coup initiated or abetted by a country’s elected leader, especially in order to establish absolute control of the state. – Lexico Oxford English and Spanish Dictionary.