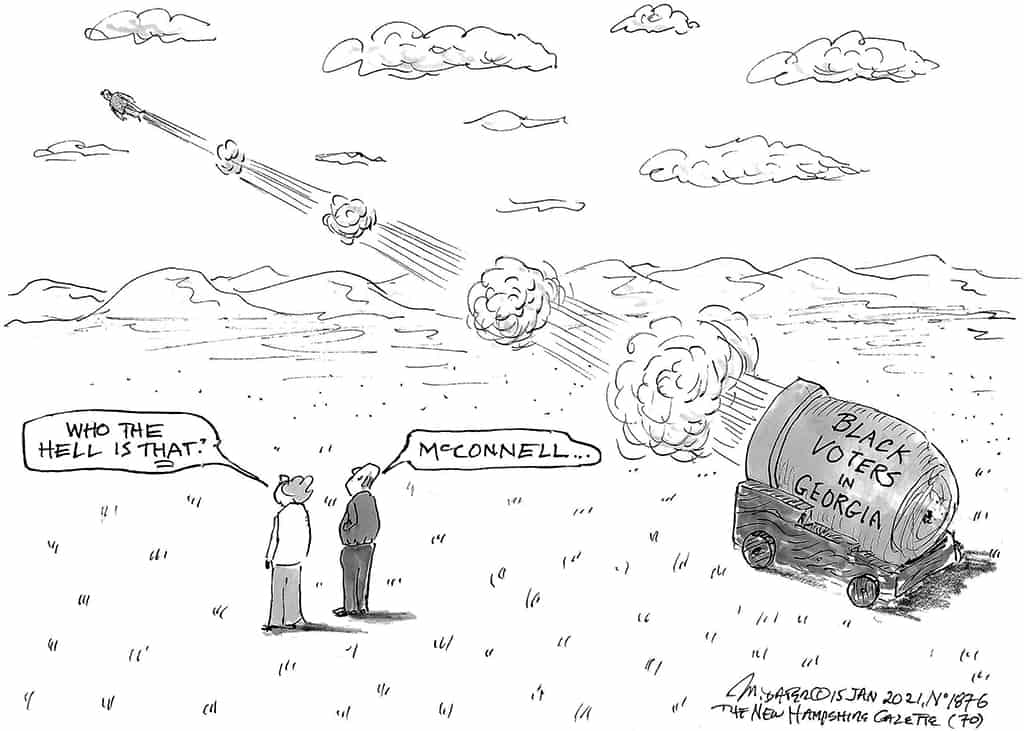 [Thomas J. McIntyre, of Laconia, represented New Hampshire in the U.S. Senate from November 7, 1962 until January 3, 1979. In March of 1978, after addressing the Senate regarding the Panama Canal Treaties, McIntyre spoke of an ominous political trend. – The Ed.]

I want to express myself on the way the issue of the canal treaties has been politicized, and I will do so with no little anger and resentment. Perhaps what I am going to say is not precisely germane to the question before us, but I believe with all my heart that it must be said and said now. …

Mr. President, I believe the techniques used to exploit the issue of the Canal treaties are the most compelling evidence to date that an ominous change is taking place in the very character and direction of American politics. …

But whatever the cause, Mr. President, I see abundant evidence that these “dangerously passionate certainties” are being cynically fomented, manipulated, and targeted in ways that threaten amity, unity, and the purposeful course of government in order to advance a radical ideology that is alien to mainstream political thought. …

There have been times when some of us have felt the wrath of the purist left, Mr. President. And now—today—many of us are feeling the wrath of the New Right because we will not bow to their threats and vote against ratification of the canal treaties. …

On December 4, 1977, the Conservative Caucus of New Hampshire, passed a resolution of censure and served it on me like a subpoena. I was “censured” for a speech I made last September, a speech in which I took neither side on the treaty issue but merely spelled out the pro and con arguments I would have to consider when I finally made my decision on how to vote. …

Not only did the resolution censure me, it required me to appear before the Caucus in Wolfeboro, N.H., on February 12th to justify why I should not vote against ratification and/or refute said censure.

My nonappearance, the resolution said, would constitute prima facie evidence of my intent to vote for ratification.

Well, I did not go before the caucus, so I have to assume I was tried in absentia and found guilty of a decision I had not yet made at that time. …

Within the year, the Governor, the head of the Conservative Caucus, made the following bizarre announcements: He said the Carter administration was pursuing “a pro-Communist course.” He said Martin Luther King “did great harm to the American way of life through his association with Communist inspired organizations.” …

William Loeb immediately rushed to the Governor’s defense, declaring in a signed, front page editorial that the 14 clergymen “have been playing for suckers…Their idealism and their innocence and almost complete ignorance about South Africa has been taken advantage of.”

Mr. Loeb went on to give his own appraisal of John Vorster’s South African regime. “The South Africans,” Leob said, “are doing the best they can to bring these Blacks out of the jungle.”

Mr. President, I cite the above public utterances by the national chairman of the Conservative Caucus and Mr. Loeb only to ask the obvious. If they hold such benighted opinions on those matters, how much credence can we give their views on the Panama Canal treaties?

But credibility may be too much to ask of men whose stock in trade is flag waving, sabre rattling and the politics of threat and vengeance.

In all of this Nation, Mr. President, there may not be two more radically belligerent public figures than Meldrim Thomson and William Loeb. Though neither has ever worn the uniform of his country into battle, they are the first to demand the kind of precipitous action that could plunge young Americans back into combat.

Only a few weeks after the oil embargo of 1973 got under way, Mr. Loeb charged into this most sensitive situation with an editorial titled: “Lets Go After Our Oil.” Calling the Arab leaders “heathen swine,” he said that if they did not quickly yield to an embargo and blockade we could ask them, and I quote:

“How would you like to have us bomb your holy cities of Mecca and Medina out of existence?” …

But the beliefs and the tactics of the radical right are nothing new to those of us who call New Hampshire home, Mr. President, so it was no surprise to see Governor Thomson, Mr. Loeb, and the Conservative Caucus team up to threaten vengeance on John Durkin and Tom McIntyre for supporting the canal treaties.

I am certainly not sanguine about such powerful and ruthless opposition, Mr. President, but after 16 years of weathering the sustained attacks of Mr. Loeb and his ilk neither am I anguishing over the outcome.

My political fate is not my concern here today. My concern is the desperate need for people of conscience and good will to stand up and face down the bully boys of the radical New Right before the politics of intimidation does to America what it has tried to do to New Hampshire.

So I say to my colleagues in closing:

If you want to see the reputations of decent people sullied, stand aside and be silent.

If you want to see people of dignity, integrity and self-respect refuse to seek public office for fear of what might be conjured or dredged up to attack them or their families, stand aside and be silent.

If you want to see confidential files rifled, informants solicited, universities harassed, “enemy hit lists” drawn up, stand aside and be silent.

If you want to see dissent crushed and expression stifled, stand aside and be silent.

If you want to see the fevered exploitation of a handful of highly emotional issues distract the Nation from problems of great consequence, stand aside and be silent.

If you want to see your Government deadlocked by rigid intransigence, stand aside and be silent.

If you want this Nation held up to world-wide scorn and ridicule because of the outrageous statements and bizarre beliefs of its leaders, stand aside and be silent and let the Howard Phillips, the Meldrim Thomsons and the William Leobs speak for all of us.

“No government fights fascism to destroy it. When the bourgeoisie sees that power is slipping out of its hands, it brings up fascism to hold onto their privileges.”

– Buenaventura Durruti, quoted in Revolution and Counter-Revolution in Spain (1963), by Felix Morrow